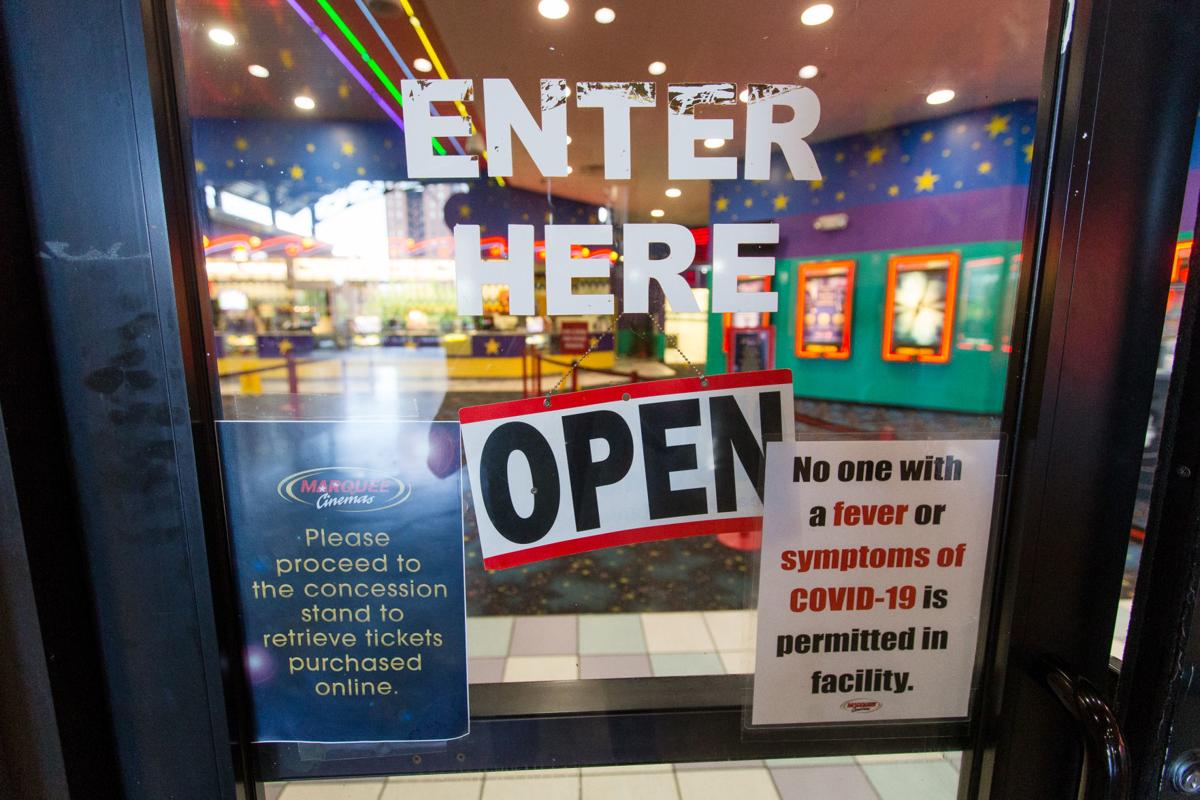 Marquee Cinemas in Pullman Square in downtown Huntington reopened in June with added safety precautions. Economists said Thursday the leisure and hospitality industries were hit the hardest during the coronavirus pandemic in spring 2020. 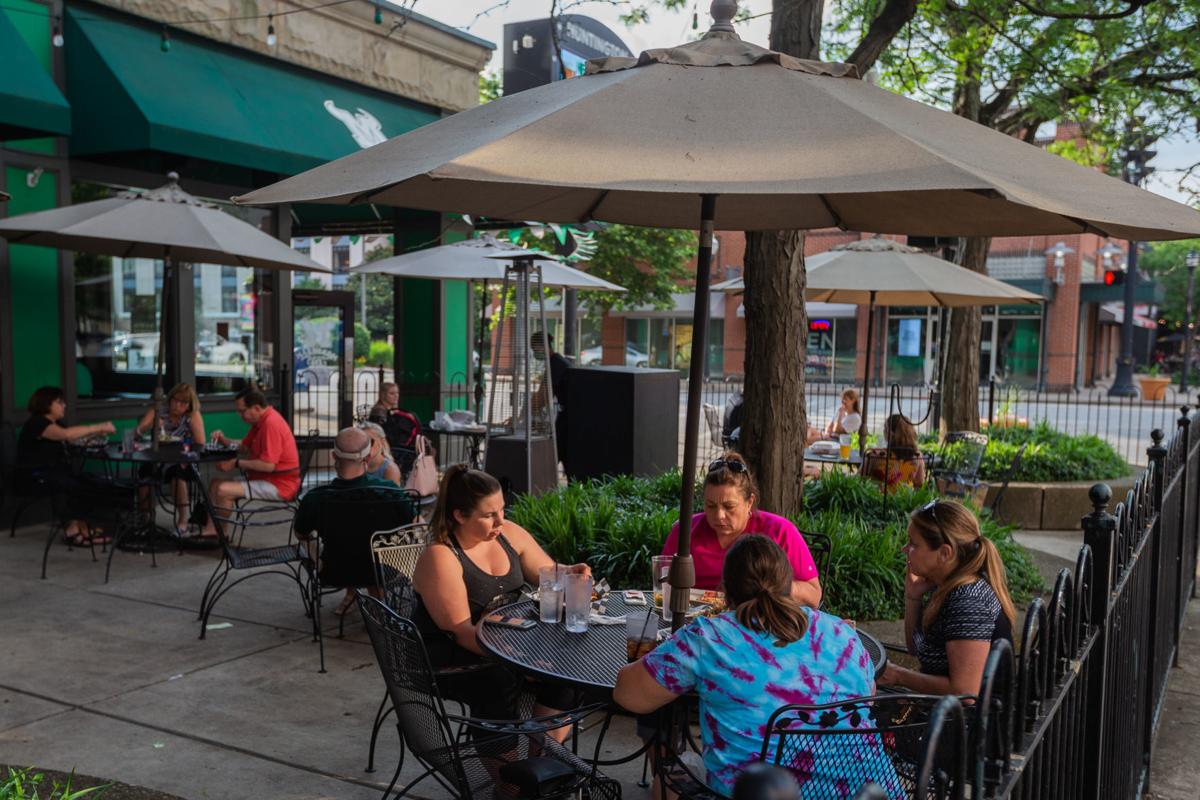 People dine outdoors at the Marshall Hall of Fame Cafe on June 6 in downtown Huntington. Economists said Thursday the leisure and hospitality industries were hit the hardest during the coronavirus pandemic in spring 2020.

Marquee Cinemas in Pullman Square in downtown Huntington reopened in June with added safety precautions. Economists said Thursday the leisure and hospitality industries were hit the hardest during the coronavirus pandemic in spring 2020.

People dine outdoors at the Marshall Hall of Fame Cafe on June 6 in downtown Huntington. Economists said Thursday the leisure and hospitality industries were hit the hardest during the coronavirus pandemic in spring 2020.

“This recession came completely out of the blue and had nothing to do with underlying economic causes,” said John Deskins, BBER director. “As some economists have pointed out, this is a recession by design. We intentionally closed businesses and told people to stay home. This recession is not driven by economic issues, but instead by public health issues.”

Despite unprecedented and historic job losses and other negative economic data during the coronavirus environment, Deskins and others participating in the meeting said they remain optimistic for a “V-shaped” recovery.

“While the recovery is likely going to be a slow recovery, we are seeing some indicators that a V-shaped recovery could happen,” he said.

One of those indicators came from Andy Bauer with the Federal Reserve Bank of Richmond.

“We have seen a 17.7% increase in consumer spending in May,” Bauer said. “Consumers have received large amounts of income through the CARES Act and have money to spend. Also, applications for mortgages have increased sharply back to February numbers. However, there is still a lot of uncertainty, and the economic recovery depends on how the pandemic acts in the second half of the year.”

Deskins said the leisure and hospitality industry has been hit the hardest.

Deskins added that the state has gained back 13,000 jobs since mid-April, which is a 2% rebound.

“These are very encouraging numbers, and we have hope for continued, steady progress,” he said.

The state’s unemployment rate was around 4.9% before the pandemic and skyrocketed to 16% in April.

“This unprecedented spike peaked at 146,566 West Virginia weekly unemployment insurance benefits filings the week of April 18, and we are down about halfway to 76,609 filings the week of June 13,” he said. “This is a good sign that economic recovery is taking place.”

Deskins said coal production in the state dropped 30% since the pandemic started.

“Coal production in January was in the mid-90 ton range and is now in the mid-60 ton range,” he said. “This is a real punch in the gut to West Virginia’s economy, and we don’t know how long this will last.”

Deskins added that natural gas production is down 7% this year.

West Virginia Commerce Secretary Ed Gaunch said while it’s hard to make policy during the pandemic, he is also seeing some good things starting to happen.

“We are excited about tourism in West Virginia, and we have seen record reservations at our state parks,” he said. “We are seeing more regionalism in economic development with good results. We are also developing new programs to attract remote workers and businesses to the state. So there are opportunities for us during this time.”

“We have received over 3,000 questions from small businesses since early March,” she said. “We found that 25% to 50% of them didn’t pursue the program because they didn’t know how it works. There is still funding available until June 30, so we encourage all small businesses that want to pursue this program to give us a call so we can help them with their applications.”

Michael Graney, executive director of the West Virginia Development Office, said his agency is working on stabilizing companies and connecting them with resources.

“We have been working on recapitalizing a number of revolving loan funds and companies’ short-term capital needs,” he said. “We have to figure out how to fill that need. The development office is fully engaged to make a V-shaped recovery.”

Deskins says while this is not the worst economy West Virginia has faced, it’s still historic in its sudden and sharp downturn.

“It got so bad, so fast, and we’ve never seen that before,” he said. “The Great Depression took three years to reach its peak.”

Deskins said health policy and the extent of the virus will greatly dictate the path of growth for West Virginia in the second half of 2020 and in 2021.

“The longer the pandemic goes on, the longer the underlying damage to the economy and the longer it will take to recover,” he said. “We are currently looking at some of that underlying damage, like permanent business closures and bankruptcies, which could indicate a longer recovery period. Also, if we see a spike in West Virginia in COVID-19 cases, like we are seeing in several other states, then the economic forecast changes.

“Another shutdown could put us back to where we started at the beginning of this pandemic.”