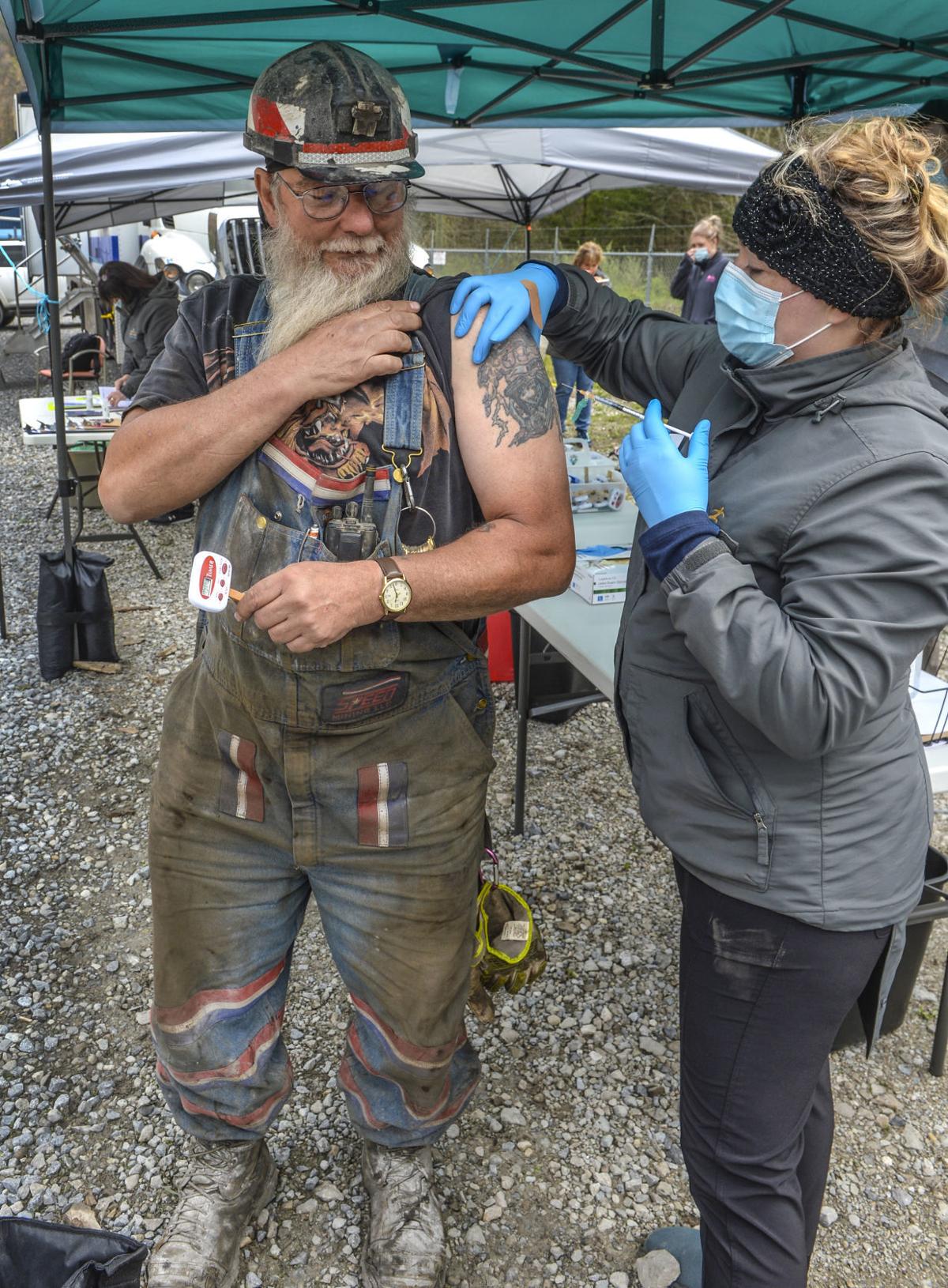 Coal miner Billy “KeeBee” Foster receives his COVID-19 vaccine in April from Dr. Jessica McColley at the Blackhawk Mine site in Kanawha County. 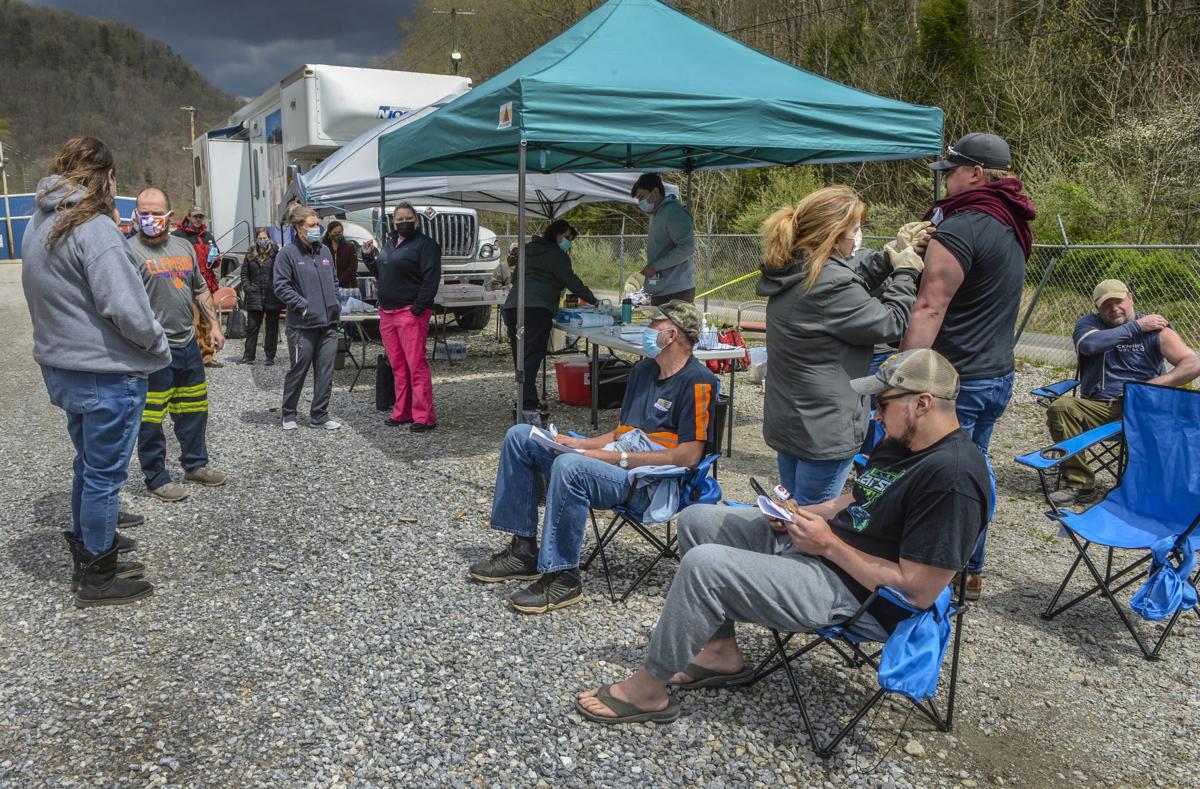 Coal miners wait to receive their COVID-19 vaccine from Cabin Creek Health Systems in the parking lot of the Blackhawk Mine complex on April 15 in Kanawha County. 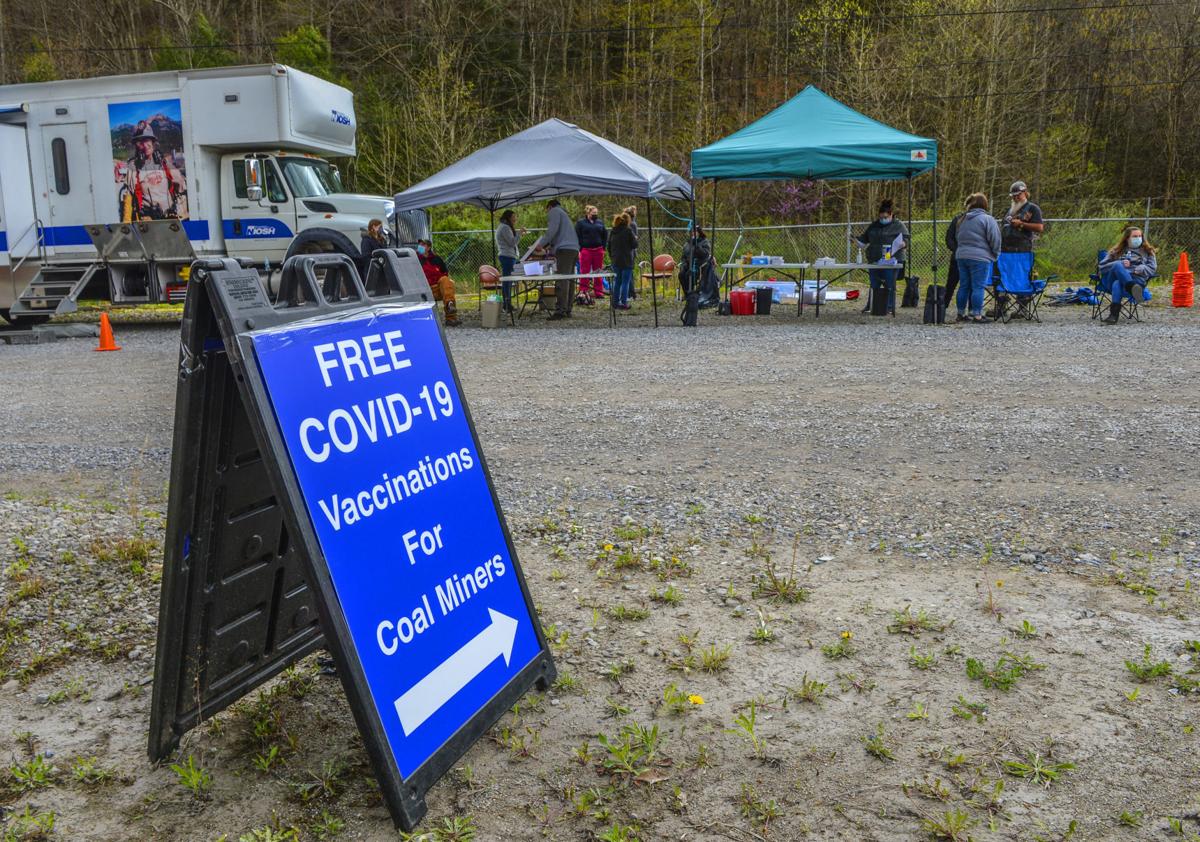 Cabin Creek Health System hosted a COVID-19 vaccination clinic for coal miners at the Blackhawk Mine site on April 15.

Coal miner Billy “KeeBee” Foster receives his COVID-19 vaccine in April from Dr. Jessica McColley at the Blackhawk Mine site in Kanawha County.

Coal miners wait to receive their COVID-19 vaccine from Cabin Creek Health Systems in the parking lot of the Blackhawk Mine complex on April 15 in Kanawha County.

Cabin Creek Health System hosted a COVID-19 vaccination clinic for coal miners at the Blackhawk Mine site on April 15.

CHARLESTON — In 1973, a group of union coal miners in eastern Kanawha County formed Cabin Creek Health to care for and serve families living in the region’s mining communities.

It was the first clinic of its kind in West Virginia. While the clinic has expanded to become a health system with 11 sites throughout the Kanawha Valley, its mission has remained the same.

“It’s still the mission, and it really does feel — especially standing on the coal mine in Cabin Creek, right near where that mission started — that, today, we’re living the mission,” Dr. Jessica McColley, head of medical services at Cabin Creek Health Systems, said. “It’s poetic, so many years later, to still be at the mines.”

Over the past month, McColley and her colleagues have been working to vaccinate coal miners specifically. They show up at the mines between shifts and catch workers coming and going.

“We’ve been even expanding past Kanawha County with this initiative, and that’s because we see the need. We go outside Kanawha for these traveling events, because there is a need and it’s not always being met,” McColley said. “Now we went to one mine, and that went well, so we can reach out to some more and do others. We’ll keep doing that.”

McColley called the working environment for coal miners “great for an airborne virus.” Underground miners often work in small, low-airflow areas with several other people for extended periods of time.

Researchers are learning more about COVID-19 and its variant strains every day, but they agree the lungs are often the main organs affected.

“That’s one of the most significant effects we’ve seen from COVID-19,” said Dr. Rayan Ihle, a critical care pulmonologist with Charleston Area Medical Center. “The people that end up having severe symptoms are often very, very sick … it can be so bad they end up on the ventilator, and unfortunately when COVID-19 is that severe that you end up in the ICU or life support, the mortality rate is (high).”

This is important for coal miners, many of whom already suffer from preexisting lung conditions, such as black lung disease or COPD, Ihle said.

The Mine Safety and Health Administration said in April that, while the agency was collecting information on mines either closed or affected by COVID-19, that data would not be made public.

The United Mine Workers union has said it keeps this data itself. Representatives from the UMW did not return requests for comment.

COVID-19 poses a serious health risk to coal miners, Ihle said, and the best protection they, or anyone, can have is a vaccine.

“Coal miners, being at higher risk of having complications from COVID-19, should really be on the forefront and standing in the front of the line to protect themselves,” Ihle said. “But vaccination not only helps that individual patient not contract (the virus) — it protects others.

“It’s almost a civic duty, because it’s to protect those around you as well. For me, it’s like we owe it to the people around us.”

COVID-19 vaccination rates across the state have plummeted in recent weeks, but McColley said it’s incorrect to label every unvaccinated West Virginian as “vaccine hesitant.”

“Not everyone can take a day or two off to find a shot, get it and recover,” McColley said. “People rely on their income, and we know paid days off aren’t available to everyone who may need them.

“A lot of people, the men, they said they were (getting vaccinated) because their wife wanted them to. So there’s that family aspect or expectation, and they aren’t necessarily against the vaccine — it just wasn’t a priority.

“When we’re out there, right in front of people, I think you learn it’s harder for them to say no. That’s why (at Cabin Creek) we really focus on meeting people where they are. We know that works.”