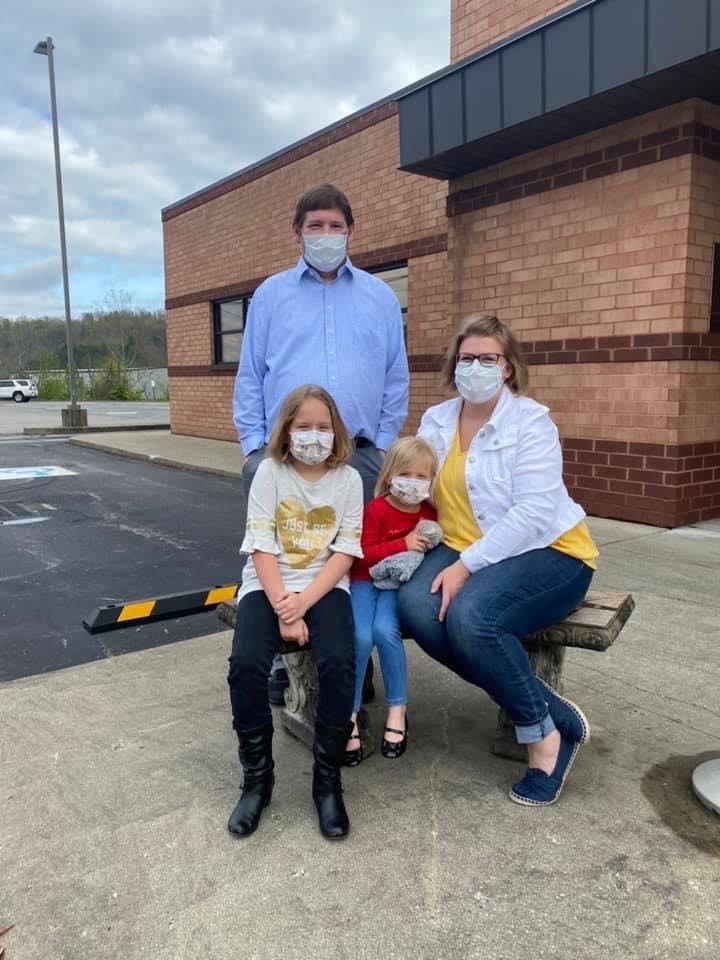 The Vovk family of Hurricane, W.Va. — Brandon, Lori and daughters — is pictured after Brandon’s three-week stay in the intensive care unit of Cabell Huntington Hospital, where he was placed on a ventilator to treat COVID-19. “This experience has brought us closer together and taught us not to take one single day for granted,” Lori said. 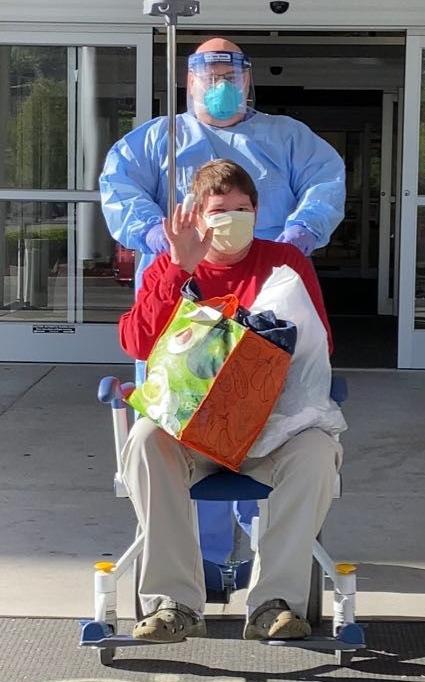 Brandon Vovk, of Hurricane, W.Va., is wheeled toward his waiting family after his three-week stay in the intensive care unit of Cabell Huntington Hospital, where he was placed on a ventilator to treat COVID-19. 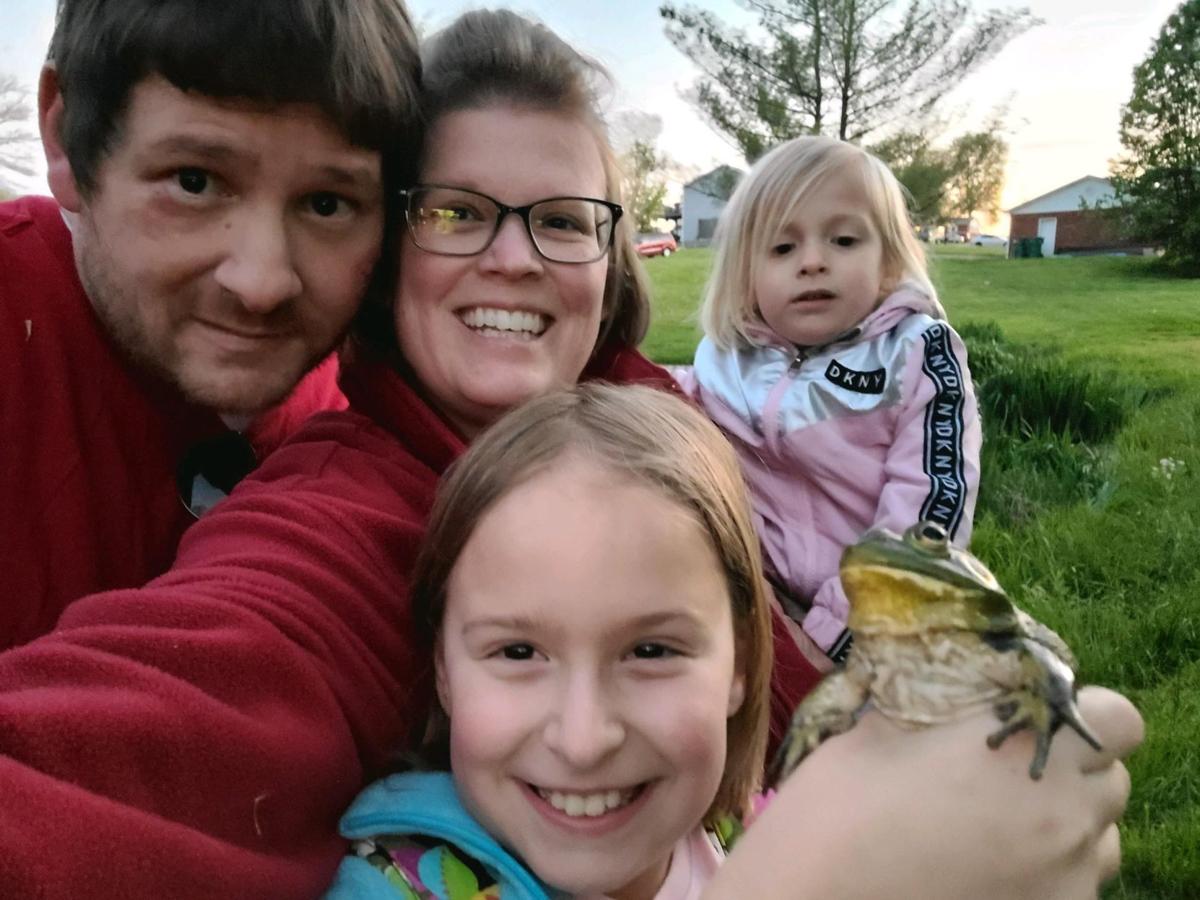 Brandon and Lori Vovk and their daughters (and a friendly amphibian) are pictured during healthy times.

The Vovk family of Hurricane, W.Va. — Brandon, Lori and daughters — is pictured after Brandon’s three-week stay in the intensive care unit of Cabell Huntington Hospital, where he was placed on a ventilator to treat COVID-19. “This experience has brought us closer together and taught us not to take one single day for granted,” Lori said.

Brandon Vovk, of Hurricane, W.Va., is wheeled toward his waiting family after his three-week stay in the intensive care unit of Cabell Huntington Hospital, where he was placed on a ventilator to treat COVID-19.

Brandon and Lori Vovk and their daughters (and a friendly amphibian) are pictured during healthy times.

HURRICANE, W.Va. — “COVID-19” and “coronavirus” are words that have changed more than just the vocabulary of one family in Hurricane, West Virginia.

For the Vovk family, the grim reality of those terms has completely altered the way they look at life.

For Brandon and Lori Vovk and their two daughters, life is more precious now. As a family, they refuse to take anything for granted anymore.

That is because of the nightmare they lived through, which began March 31 — the day Brandon was taken by ambulance to the emergency room while his wife and daughters watched helplessly. That was the day he tested positive for COVID-19.

“A week prior to going to the hospital, I had a low-grade fever and body aches,” Brandon recalls. “I went to my primary care physician and tested negative for the flu. Because I didn’t have the ‘textbook’ symptoms of COVID-19, we assumed it was just one of the many viruses going around. I was only to be tested for COVID-19 if I developed any of the symptoms associated with it: cough, high fever or difficulty breathing.”

Five days later, the Cleveland native experienced difficulty breathing, though he still had neither cough nor high fever. Two days after that, he was staring into the worried faces of his doctors at Cabell Huntington Hospital. They had seen the X-ray of his lungs and monitored his oxygen levels. Even before the rapid COVID-19 test results were in, the doctors knew: Brandon Vovk was one of the first people in Putnam County reported to have the virus that had traveled around the world.

It was surreal. The Vovks were living “normal” lives — Lori, a teacher, and Brandon, employed in the automotive business. The couple were preparing to celebrate their 18th anniversary in a few months. They were busy raising their school-age children in Hurricane, far from the headlines and the spotlight.

But that changed instantaneously. When word of Brandon’s illness reached the community, the Vovk family became “known” across the county. Churches and individuals mobilized to help Lori and the girls. And to pray.

“Our family, friends and community went above and beyond for our family,” Lori marvels. “The No. 1 thing the community did was pray. People covered our family with prayer each and every day, all day.”

There were also fundraisers, donations, gifts, cards, messages of encouragement and grocery deliveries.

Those grocery deliveries were essential, because Lori and her daughters were immediately put under quarantine for 14 days following Brandon’s diagnosis.

“My girls and I had to be tested for COVID-19 as well,” Lori said. “My oldest daughter tested positive, but thankfully remained asymptomatic. For 14 days, we had to monitor our symptoms twice daily and report to the health department.”

Meanwhile, Brandon was fighting for his life 25 miles away.

“I was in the hospital for a total of three weeks, and for two of those, I was on a ventilator and unconscious. Therefore, I don’t remember very much,” Brandon admits. “I know the doctors, nurses and entire staff on the ICU floor worked tirelessly to ensure I received the best care. I am told that they printed out pictures of my family to hang in my room, they talked to me about my wife and children, and many even prayed over me. My treatment included being placed on a specialized prone table, and I would spend 16 hours a day in this position. After being on my back for a short break, I would then return to the prone position once again.”

At first, Lori’s only communication with her husband was through his doctors.

“I waited anxiously by the phone for any news the doctors might have,” she remembers. “For the longest time, the phone calls weren’t promising. I was told things like, ‘He’s very, very sick’ and, ‘We’re doing all we can to save him.’”

Initially, Lori was in shock, numb. When Brandon was taken away by ambulance, she assumed that he would just need some basic treatment and medication and then he would return home. She wasn’t ready to accept the seriousness of the situation at first.

But once she fully acknowledged the dire straits Brandon was in, it was hard for her to carry on as if things were normal.

“I tried to maintain a sense of normalcy for my girls but wanted more than anything to shut down,” Lori confesses. “I couldn’t be by my husband’s side, holding his hand. I was afraid of the unknown; I never knew what the doctors would tell me each day. Would it be good news? Would it be bad news? I had a lot of support, yet I still felt very alone. I missed my husband.”

She continues, “I know it was only by God’s grace that I was able to find the strength to get up each day and move forward despite all of the uncertainty.”

Brandon was moving forward as well. What some people have called a miracle occurred.

“On April 14, I was taken off the ventilator and, for the first time in two weeks, I took my first breaths on my own.”

Not a man for the spotlight, Brandon, nevertheless, was being watched anxiously by folks on his floor at the hospital. Medical professionals and even strangers erupted in cheers, many shedding tears, as he came off the ventilator.

Sadly for Brandon, his family wasn’t able to be there in that cheering crowd.

“The hardest part for me was not being able to see my family after coming off the ventilator,” he said.

And it wasn’t time to go home yet.

“Physically, I couldn’t do much,” he says. “It took two people to help me walk in the beginning, and I needed physical therapy.”

But on April 20, Brandon Vovk was released, to the relief and delight of his wife and young daughters.

And his recovery continues.

“To this day, I still notice that I have some fine motor skill issues and mild vision issues. I also wasn’t fully aware of the psychological impact this would have on me until I got home and truly began to try to process everything,” Brandon said.

His family is helping him with that.

“We are taking it one day at a time,” Lori explains. “Brandon’s recovery has truly been amazing, an absolute miracle. Yet he still has some issues that he is working through, and we are working through them as a family. When something new comes up, we deal with it together.”

The Vovks appreciate the togetherness of family and don’t take each other for granted anymore.

“My wife kept the family together even when things were at their worst,” Brandon says. “Lori is my hero. She had the hardest part. I had the easy part; I just had to stay alive. I consider myself to be the luckiest man in the world.”

Lori echoes that sentiment: “We have been blessed far more than we deserve, and we are forever grateful. This experience has brought us closer together and taught us not to take one single day for granted.”