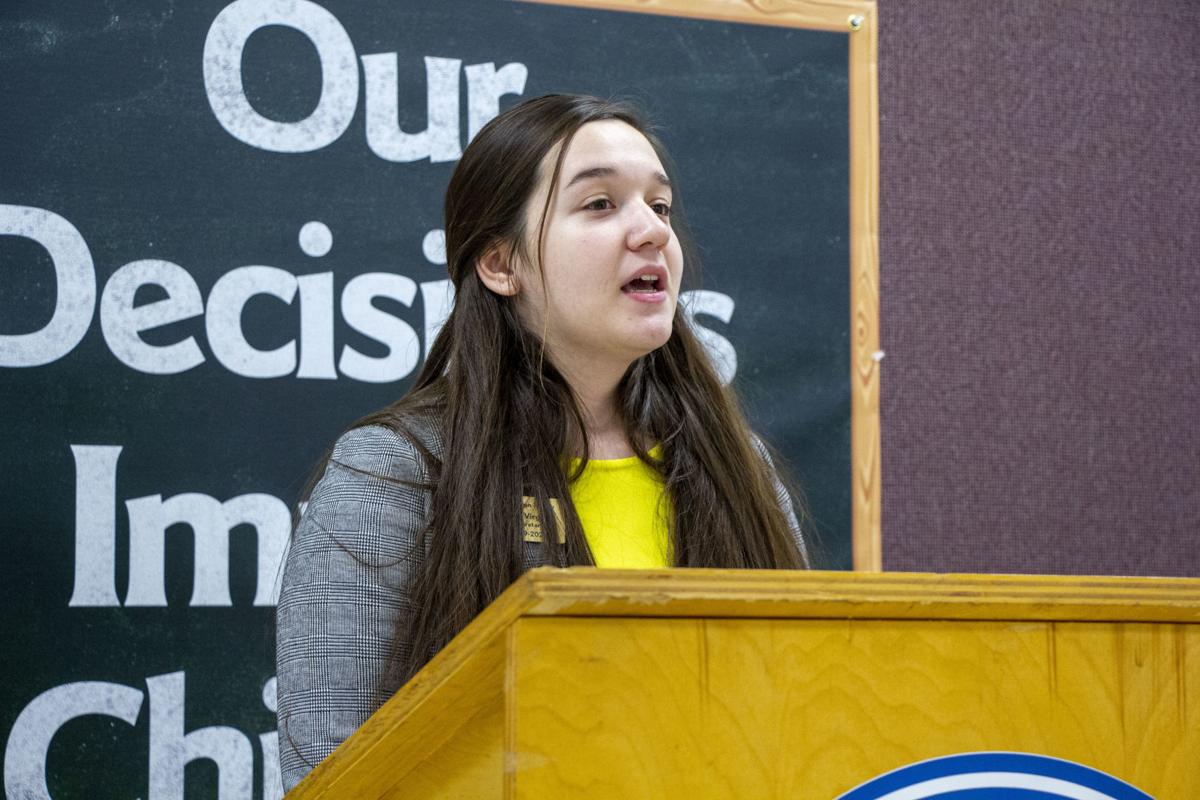 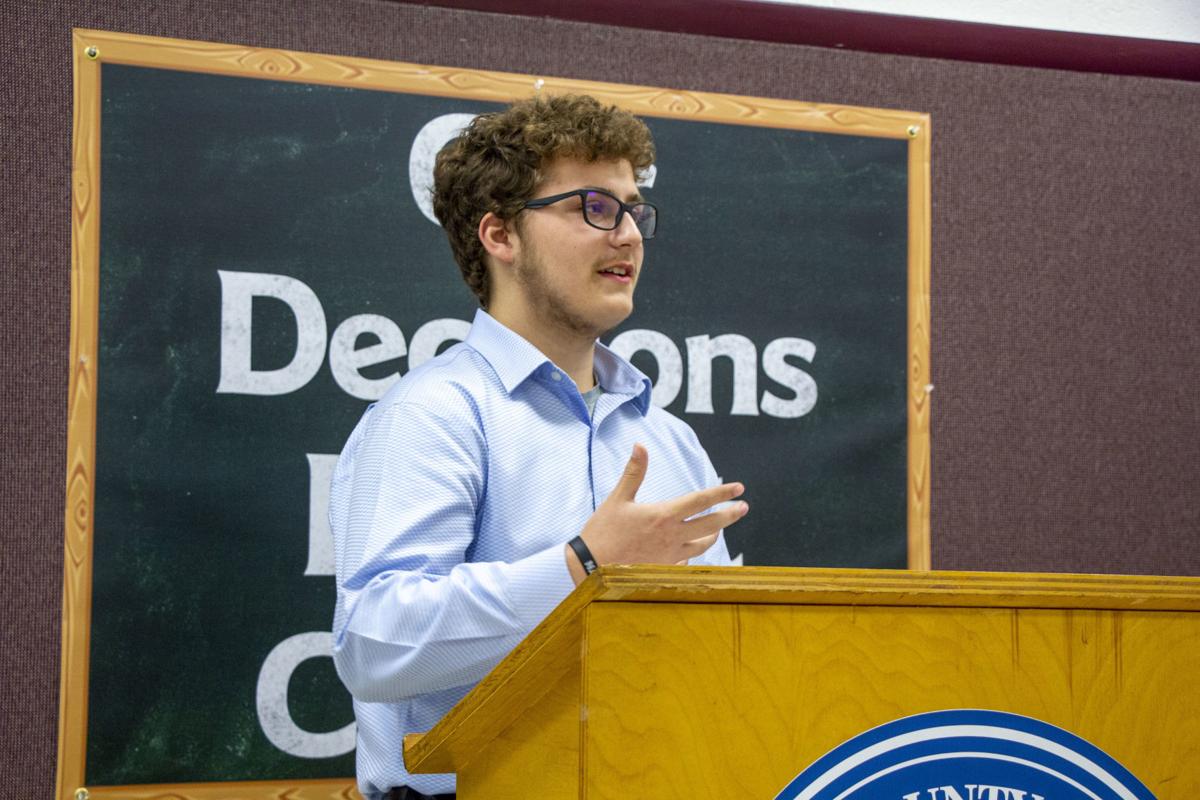 Logan High School junior Luke Jeffrey, who is the incoming State Beta President, addresses the Logan County Board of Education on Tuesday, Dec. 3. 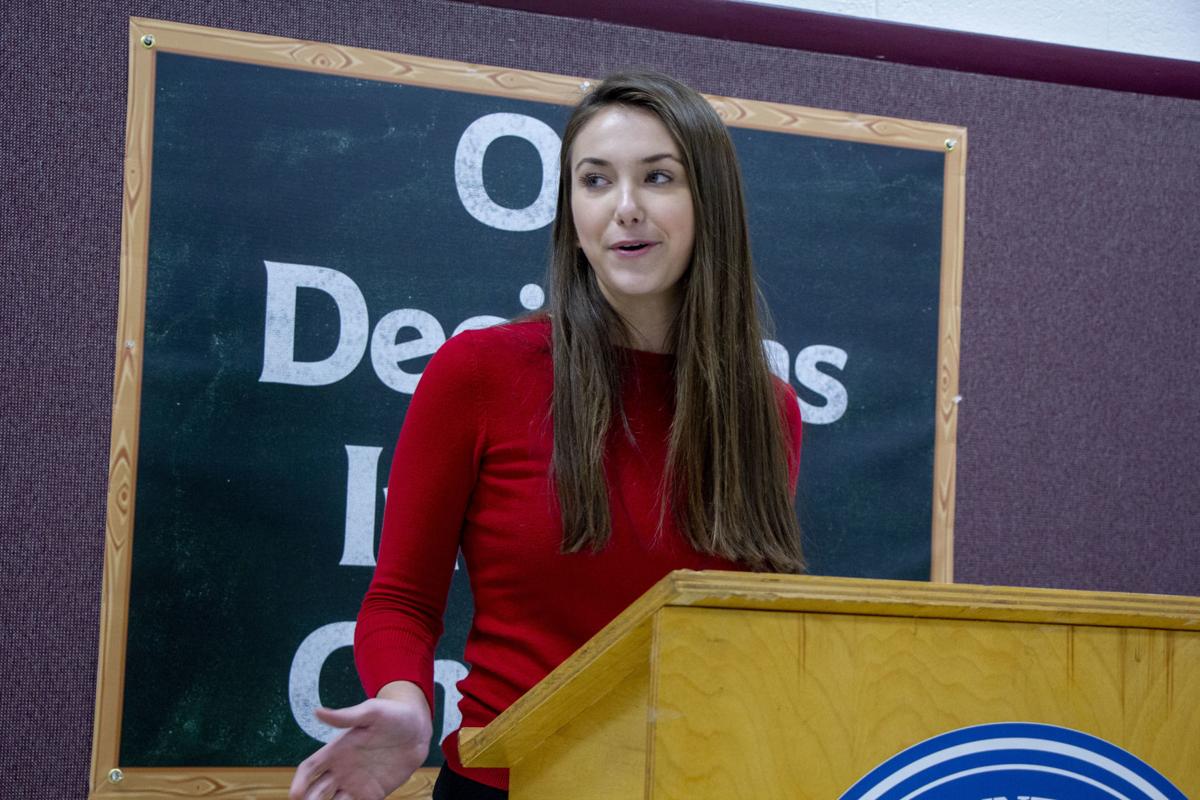 Logan High School sophomore Brooke Ooten recalls her winning speech at the National Beta Convention in June 2019 during her remarks to the Logan County Board of Education on Tuesday, Dec. 3.

Logan High School junior Luke Jeffrey, who is the incoming State Beta President, addresses the Logan County Board of Education on Tuesday, Dec. 3.

Logan High School sophomore Brooke Ooten recalls her winning speech at the National Beta Convention in June 2019 during her remarks to the Logan County Board of Education on Tuesday, Dec. 3.

LOGAN — The Logan High School Beta Club was recognized for their achievements during a recent meeting of the Logan County Board of Education.

As previously reported in The Logan Banner, the members of the LHS Beta Club won numerous awards when they competed in the West Virginia State Beta Convention in early November. Several of the club’s students spoke at the Dec. 3 meeting of the LCBOE.

Senior Madison Fraley, who serves as the West Virginia Beta State Secretary, recounted her experiences with Beta, including being flown out to Washington, D.C., by the National Beta this past summer, as well as leading the state Beta Convention.

“In my few years of experience, it has served as a very strong portion of my self-growth,” Jeffrey said. “It’s really gave me challenges and ways to learn about myself, especially this year as I campaigned for the state office position. I had to come out of my shell a little bit, and I’m generally a shyer kid.”

Jeffrey said he plans to go to the National Beta Convention in Fort Worth, Texas, in June 2020.

Sophomore Brooke Ooten, who won several competitions at the State Beta Convention, told the story of learning how to effectively deliver a speech, which lead to her winning first place division one at the most recent National Beta Convention in June 2019.

“Beta yanked out the best part of me,” Ooten said. “Beta encouraged me to pursue things I had never considered. Beta taught me that it’s OK to just loosen up and cheer for your people, your school … but most of all, Beta taught me that everyone has a talent in life, whether it’s speech, or music, or art or something entirely unique. Everyone has a talent — some people just need a little nudge toward it. I needed that nudge. Beta gave me that nudge.”

Ooten said she hopes other schools in the county form Beta Clubs as well.

“I’m just so thrilled that I got to experience such an opportunity, and I hope that schools throughout the county can adopt Beta Clubs in their schools and have that same experience, and that more students from our school can go to nationals and have that experience,” Ooten said.

“What a wonderful group,” Superintendent Patricia Lucas said. “What a great representation for Logan County. It just makes me more proud when we have students that exemplify the type of students that we want to have representing our school system.”

“I think often times, and I think unfairly, we hear that the board of education only cares about athletics or that sort of thing, but that’s not true,” said board member Jeremy Farley. “I think that’s the furthest thing from the truth — especially this board — we have made a special effort to recognize students who have excelled academically, as well as in other pursuits other than athletics.”

McPeak said the LHS Beta Club has 210 members. According to WVDE enrollment data, LHS has a current enrollment of 641 students, meaning the Beta Club accounts for roughly 33% of the school’s population.

What sport do you miss watching the most on TV during the COVID-19 pandemic?