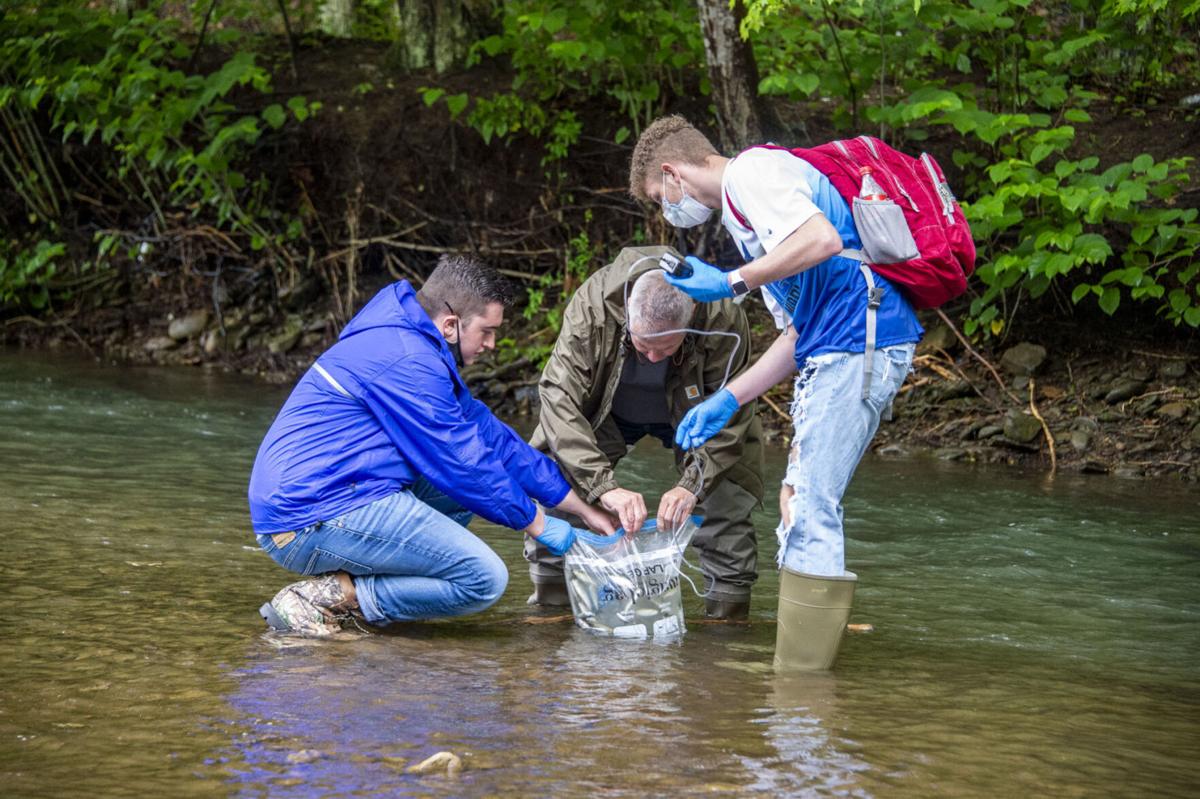 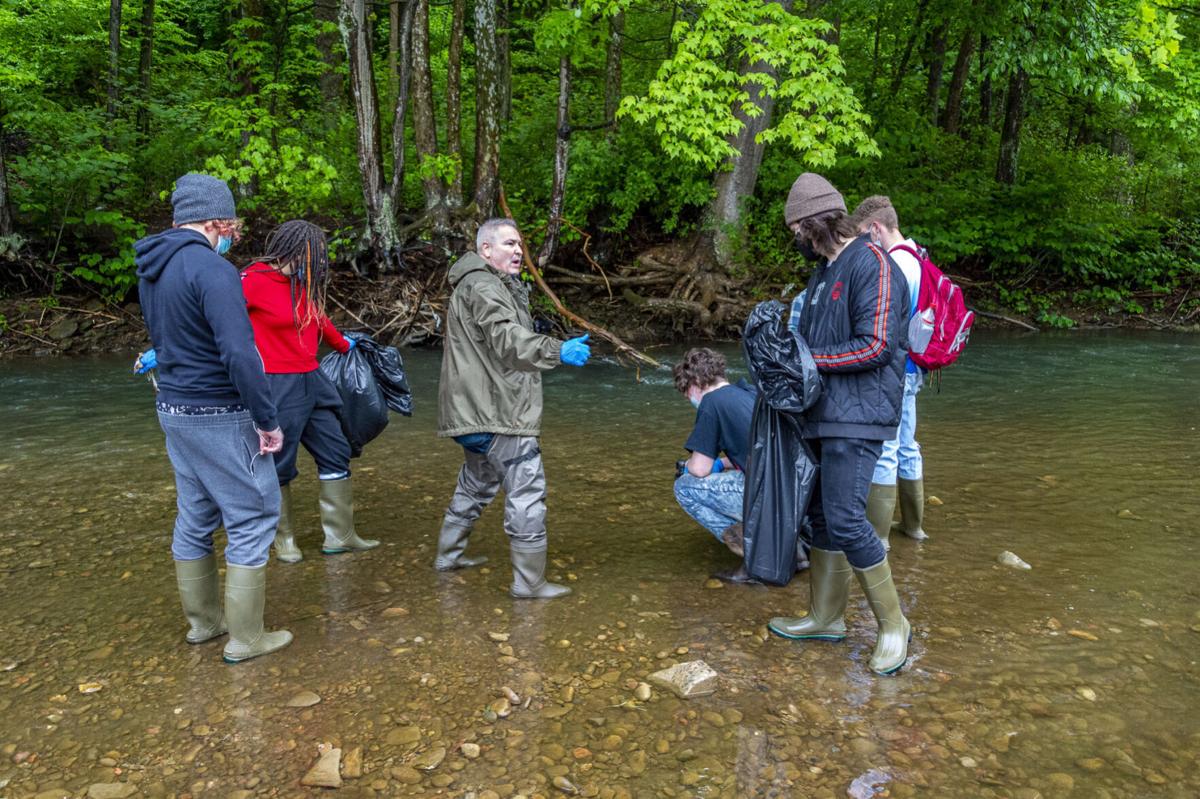 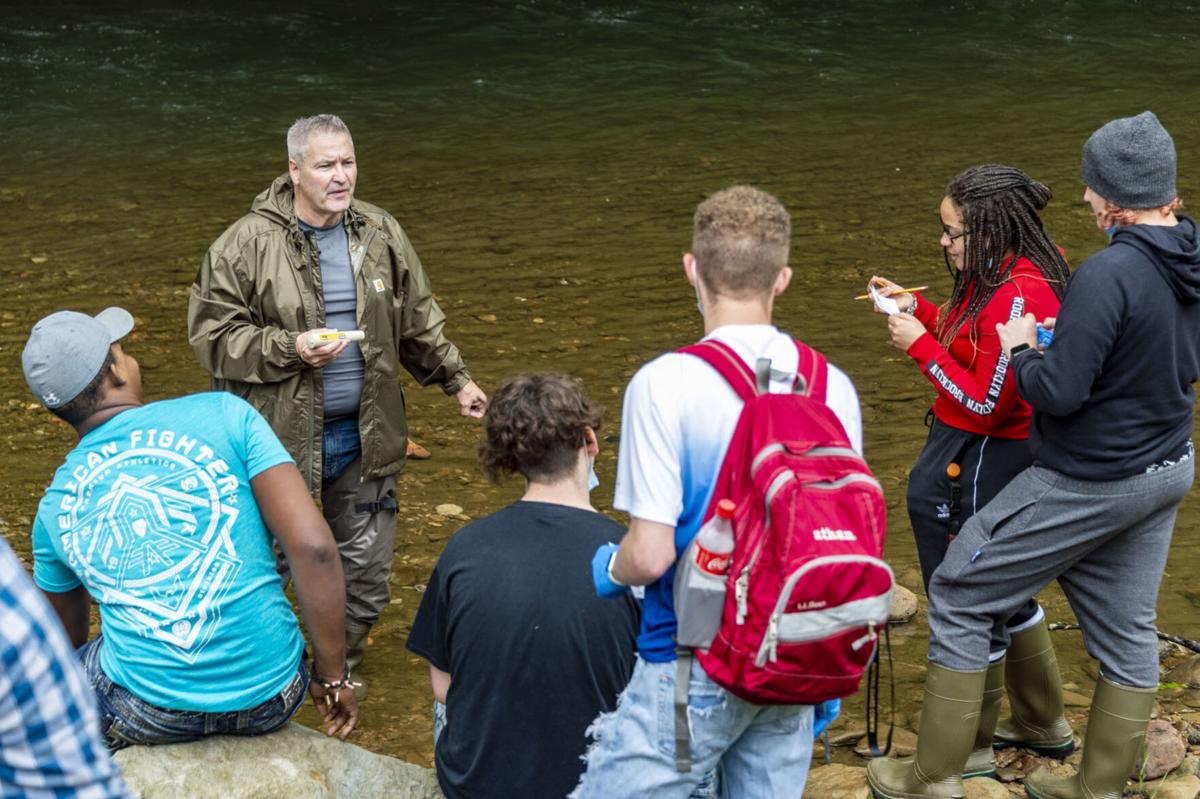 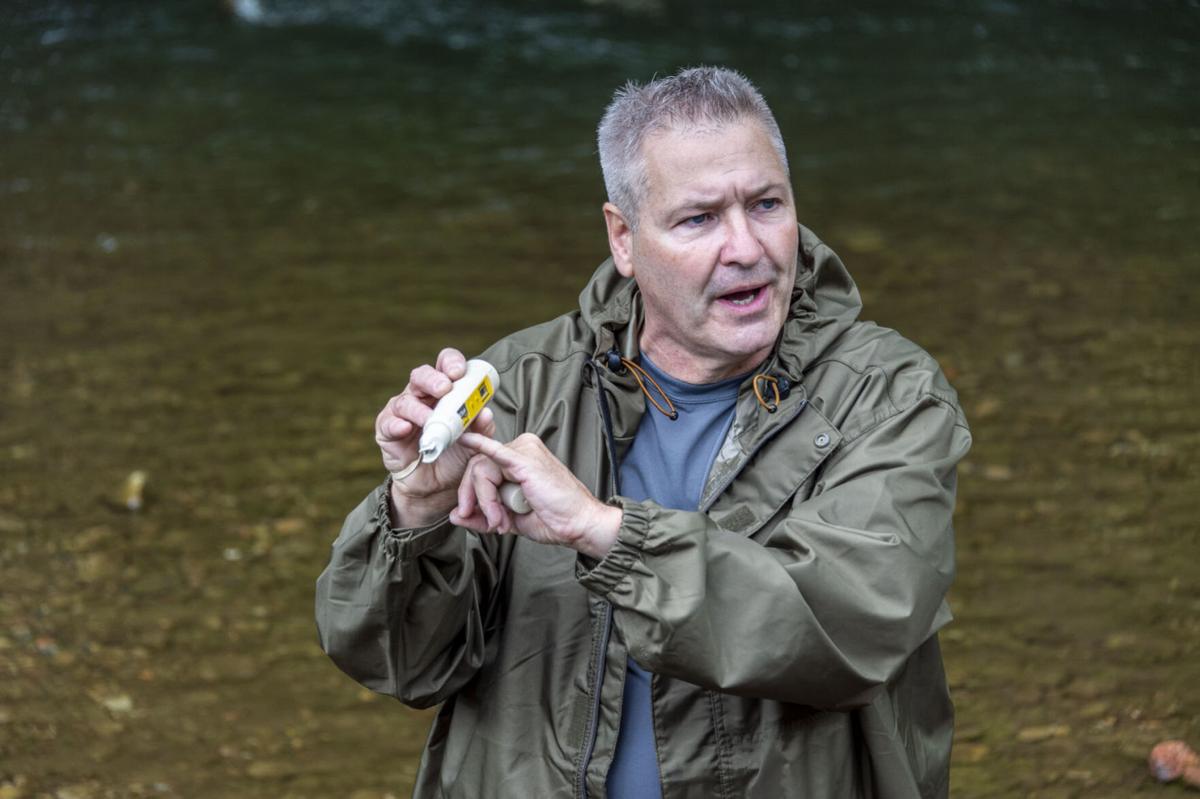 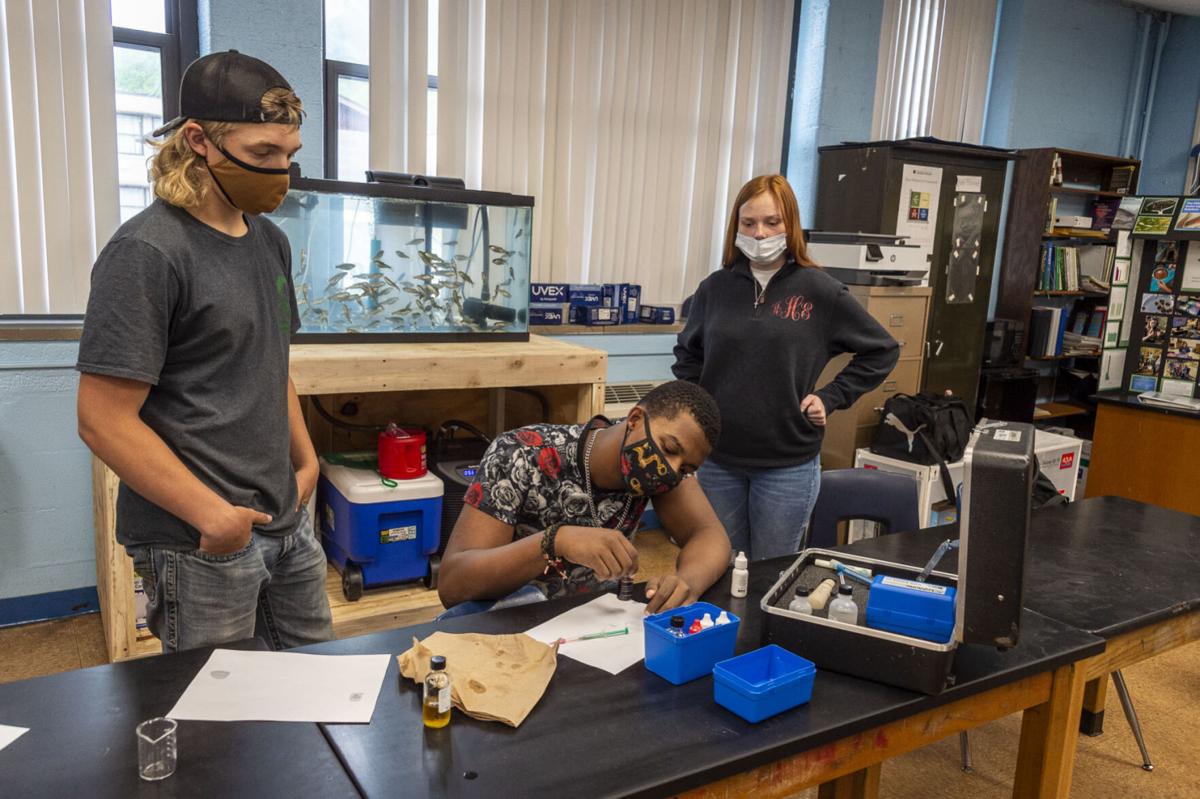 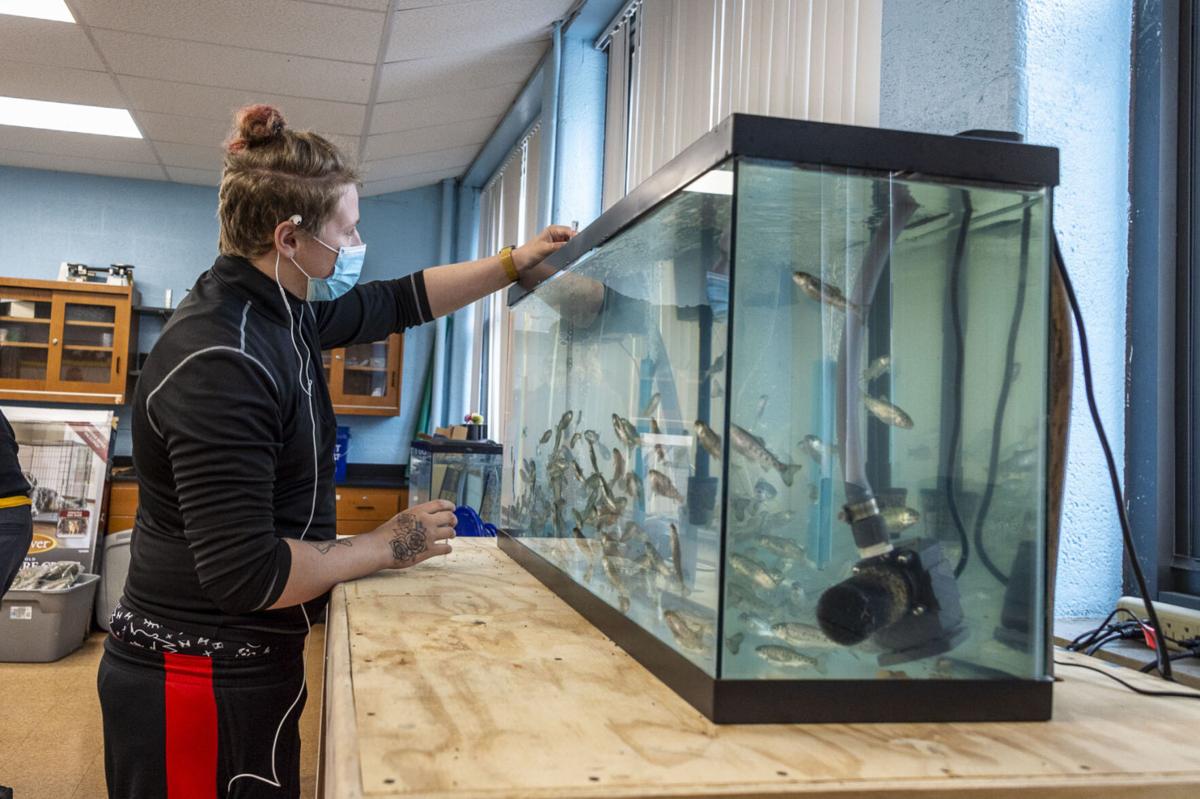 A student gathers a sample for a water test from the fish tank of student-raised trout in Logan High School teacher Hans Doderer’s classroom on Tuesday, May 4.

A student gathers a sample for a water test from the fish tank of student-raised trout in Logan High School teacher Hans Doderer’s classroom on Tuesday, May 4.

LOGAN — Over the past four months, students in Hans Doderer’s environmental science and biology classes at Logan High School received a hands-on lesson in raising trout, which culminated with a field trip to release the fish at Buffalo Creek on Wednesday, May 5.

Doderer began the project, which he calls “Trout in the Classroom,” with his students in January. He and his students began raising the trout in an aquarium in his classroom beginning with what is called the “sac fry” stage all the way up to a juvenile stage known as fingerlings.

A retired teacher from the Paintsville, Kentucky, area, Doderer has conducted the project with previous students and wanted to continue the lesson across state lines for his first year of teaching at Logan High. He said he mainly uses the lesson to teach students about the nitrogen cycle and water quality in general so they understand the impacts of pollution on water quality.

“During the process of growing the trout in the aquarium we have in the classroom, the kids learn about water quality,” Doderer said. “In general, they learn about the fish and the requirements for the sensitive trout to survive, and they are one of the most sensitive cold-water fish there are in the state, so to keep them alive is really a challenge because the kids have to monitor the water quality for four months.”

Students constantly monitored the levels of pH, ammonia, nitrite, nitrate and colonies of beneficial bacteria required to keep the water healthy for the fish in the 55-gallon aquarium. On top of that, students also checked on water temperature and learned how it affects the way the fish can tolerate the other compounds at certain temperatures.

“It’s just a great hands-on way to get kids involved and to learn about this water quality issue and how we can keep our water more pure and healthy,” Doderer said.

The project came to an end Wednesday, May 5, when the students all took a field trip to Buffalo Creek to release about 70 trout into the water. Located near the Buffalo Creek Memorial at Kistler, the site is one of the areas approved by the West Virginia Department of Natural Resources (WVDNR) for release.

“We’re hoping that they’ll survive in that water there until adulthood,” Doderer said. “They won’t, more than likely, if you know about the fish, the trout, they don’t reproduce in our water here, but they can live a full life, hopefully, so that’s where we’re going to release them.”

During the release trip, students also performed other tasks, such as testing the creek water for levels of various compounds. The project itself, as well as its final trip, was well-received by most students as one they will remember well.

“I think it’s pretty cool,” said senior Kalea Fleming. “It’s a good way to learn. I don’t really learn from books — or Chromebooks now — but it’s a really good way to learn because you have hands-on, you get to do the experiments, you get to go on the field trip, physically get in the river, and you get to see the fish be released and then test the water in their new environment.”

Junior Nathan Sims, who was born in Parkersburg, moved to California and then moved to the Logan area just this school year, said the project has helped him become more conscious of the environment.

“Genuinely, it’s kind of out of context for me because I’m not really much into the environment where I’m not from the countryside, really,” Sims said. “I really enjoyed it, and I think that it has definitely helped me connect more with the environment to push me to do more community-wise.”

Junior Livia Epperheart said the project gave her and her classmates a sense of normalcy during a school year dominated by ups and downs from the COVID-19 pandemic.

“I think it’s great for people that are tactile learners and very hands-on because I know personally I’ve learned a lot because I don’t learn from looking at a screen and stuff, so doing very hands-on things helps,” Epperheart said, “and I think it’s just very nice to get out, especially during the pandemic, because students need a sense of normalcy in school again.”

Epperheart also lamented that releasing the trout was something of a bittersweet moment for her.

“I miss them, I think it’s kind of sad,” Epperheart said. “I named some of them, and then there’s one that would dance a lot, but I definitely think that it’s an experience I’ll remember from my high school years and definitely one of the memories I’ll tell my kids in the future, possibly.”

“It’s definitely been one of the better projects, especially this school year,” Blair said. “Honestly, it’s one of the only ones where you actually feel included and you’re not just sitting there, you know, mindlessly typing against a computer. Not to say that’s wrong or anything, but I do like actually getting hands-on and seeing that our water changes and how our tests are affecting the fish and are affecting the soon-to-be, or hopefully, an environment with more rainbow trout in them. I’ve liked it a lot. I’ve learned a lot about water testing and the types of chemicals and such and overall, it’s been really good, it’s really enjoyable.”

The water for the tank was provided by a chlorinator in the classroom, as well as some natural spring water taken from the “Pool of Bethesda” located of U.S. 119 in Mingo County just past the Logan/Mingo county line. Doderer said he would often gather water from the site during his commute between Logan and Paintsville, Kentucky.

The water is kept at a temperature of 55 degrees Fahrenheit thanks to a set of chilling devices, which were provided through a mini-grant. The aquarium tank was donated by Walmart, and Lowe’s donated the wood and hardware to make the base.

Overall, Doderer said about $1,800 was invested into the project this year.