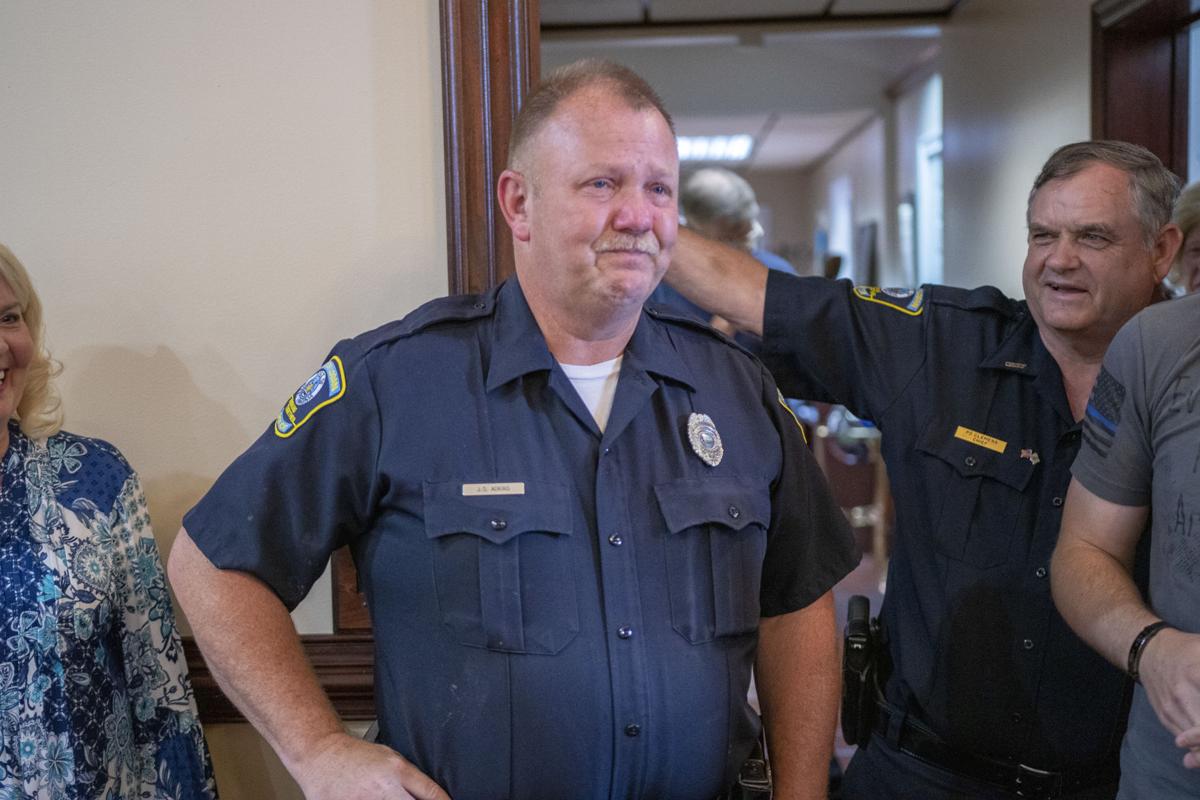 Dylan Vidovich/Logan Banner Retiring City of Logan Police Officer David Adkins was brought to tears when he walked into the surprise party that was organized for him on Tuesday. 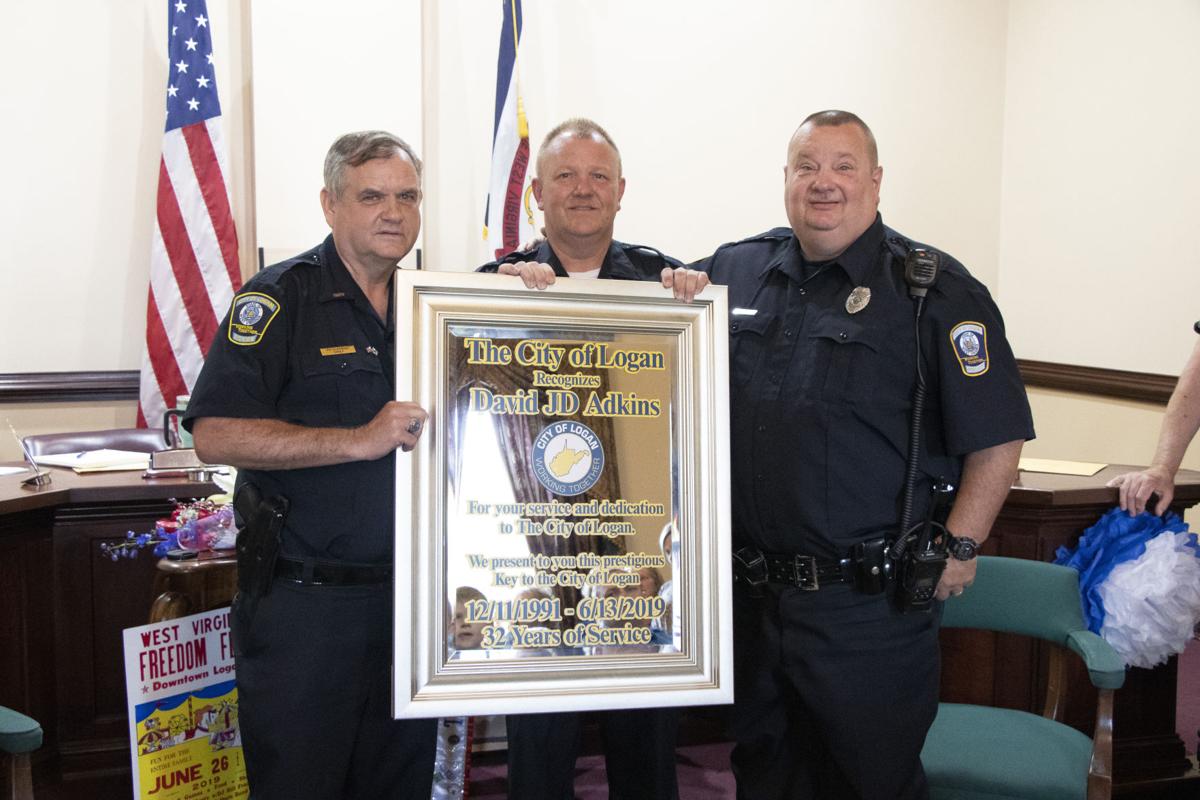 Dylan Vidovich/Logan Banner Retiring City of Logan Police Officer David Adkins was thrown a surprise party and presented with the Key to the City on Tuesday. From left, pictured, are Logan Police Chief P.D. Clemens, Adkins and his brother, Robert "J.R." Adkins. 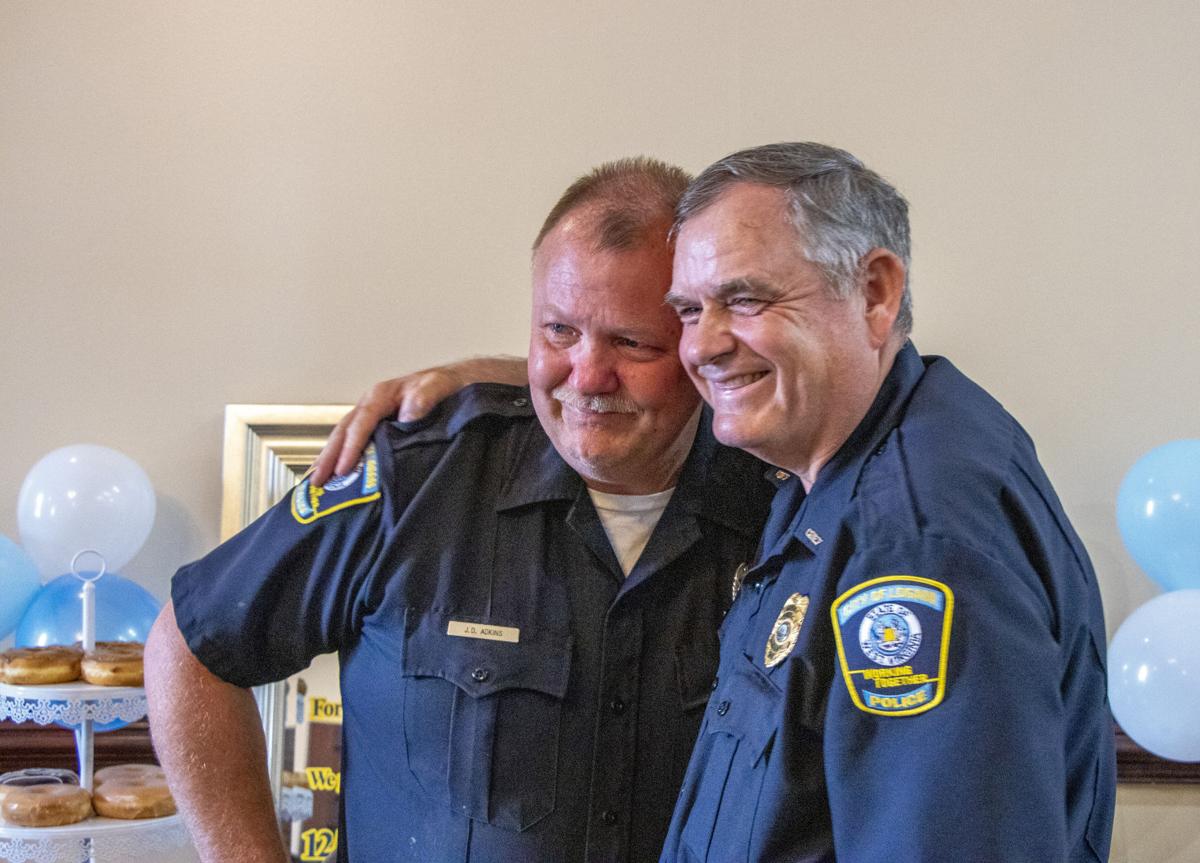 Dylan Vidovich/Logan Banner Retiring City of Logan Police Officer David Adkins was brought to tears when he walked into the surprise party that was organized for him on Tuesday.

Dylan Vidovich/Logan Banner Retiring City of Logan Police Officer David Adkins was thrown a surprise party and presented with the Key to the City on Tuesday. From left, pictured, are Logan Police Chief P.D. Clemens, Adkins and his brother, Robert "J.R." Adkins.

LOGAN - David Adkins had no idea when he walked into Tuesday's meeting of the Logan City Council that his fellow officers, family and members of the council would be throwing him a party honoring his years of service as a city police officer.

Adkins officially retired from the city's police force on Thursday - the same day as his 50th birthday. He served on the department for nearly 30 years and was moved to tears when he walked into the council meeting room on Tuesday and saw what had been put together for him.

"When you're 50 and you've spent over half of your life at the city, it's kind of hard to leave because those people have pretty much become my family down there," he said. "It just makes you feel appreciated, like you've at least made an impact on your town. Hopefully, I've done a good job and helped people and made a difference in people's lives and, of course, that's your main goal when you become a police officer is to help people, not hurt them. Hopefully, I've done that"

During his career at the department, Adkins served once as chief from 2000 to 2004, which allowed him to hire his brother, Robert "J.R." Adkins, who had been working in Chapmanville previously. Adkins described being able to work with his brother on the same police department as "awesome."

"He's not only my partner, he's my brother, so I don't ever have to worry about covering his back and the same goes for him," he said. "We've always been close and it's just, for me, to get to work with your brother, time that I'll cherish."

When asked if there's anything he'll miss about being a police officer, he remarked, "A whole lot."

"Being a police officer is a brotherhood," he said. "I'll miss all my buddies, which, hopefully, I'll still get to work with them a little bit, and being a police officer, to me, has not been like working a job. It's going to work to have fun. I've really enjoyed my career because it's really not like work. We actually make a difference out here every day, so you know, at least you can go home at the end of the day knowing that you tried to help people."

"I've enjoyed serving my community and I appreciate the City of Logan for letting me work there," he added.

At the end of the surprise party, the city council presented Adkins with their most prestigious honor: the Key to the City of Logan.

"You lose a lot of experience when you lose anyone with that many years of service," said Mayor Serafino Nolletti. "We wish Dave the best of his retirement from the City of Logan Police Department."

"Any time you lose a 26-year veteran law enforcement officer is definitely a huge blow to the city," said Logan Police Chief P.D. Clemens. "Dave knew everyone in the city and was a great source of information. He was well-liked by everyone and was always willing to help others. When you only have a total of seven officers, losing one is tough, but we will still be able to provide 24-hour coverage to our citizens."

Clemens said the department has already administered the civil service and physical agility tests and is in the process of completing background investigations to hire someone to replace Adkins soon.

Adkins said he plans to continue working as a part-time officer for the town of Mitchell Heights. He then plans to file to run for Logan County magistrate in January.