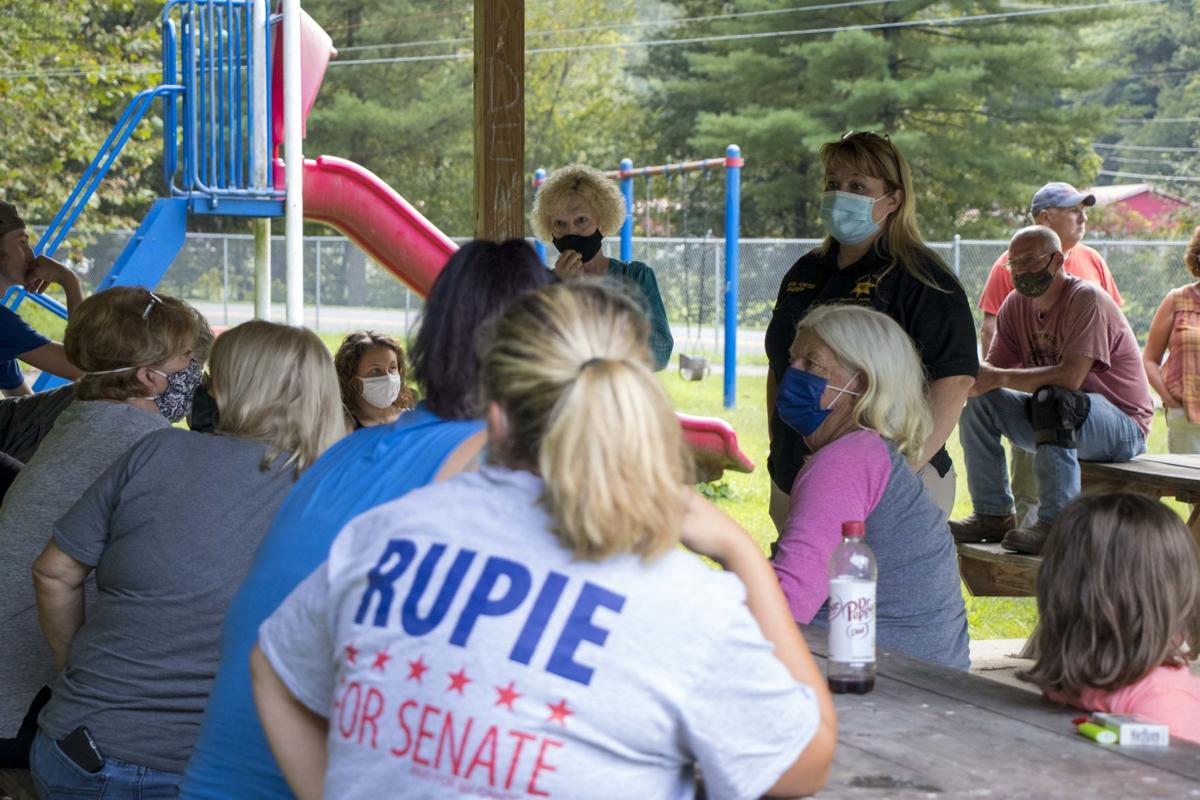 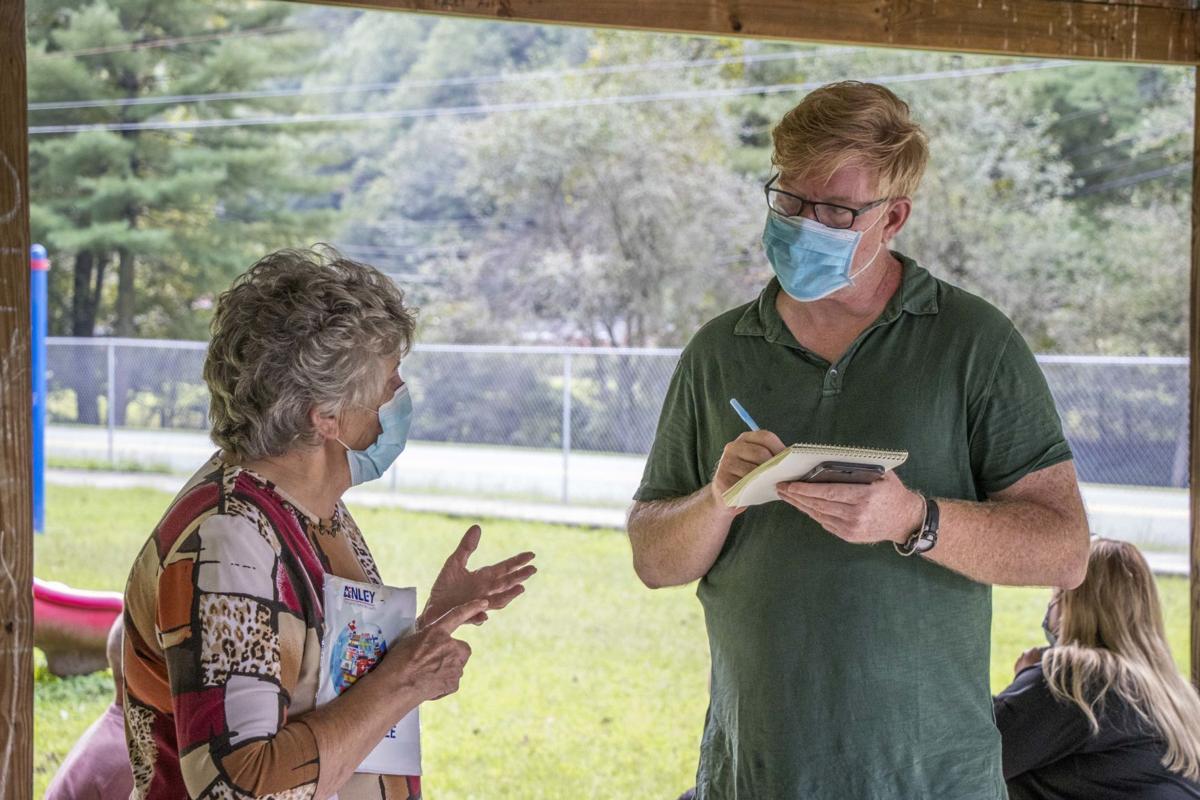 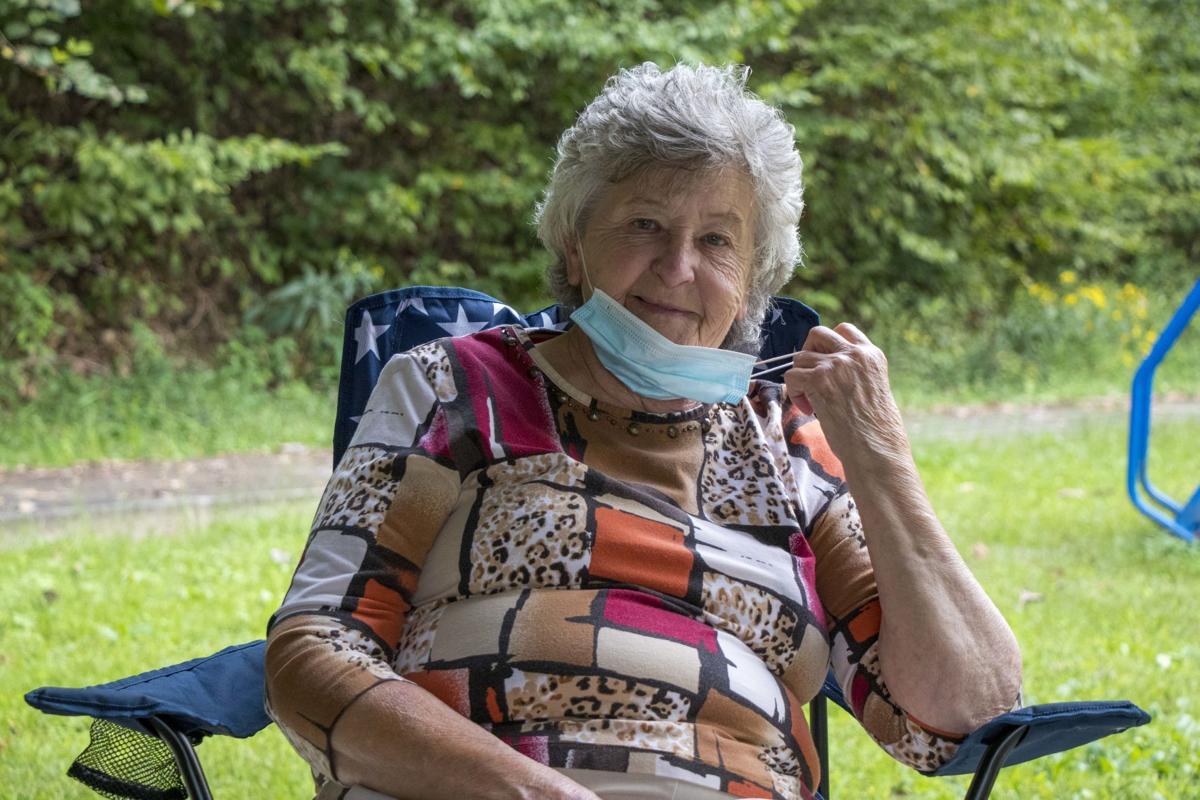 Dylan Vidovich/Logan Banner Main Harts resident Alma Blair said she contacted the Governor’s Office advocating for better internet in the area on behalf of her grandchildren and all the other residents.

Dylan Vidovich/Logan Banner Main Harts resident Alma Blair said she contacted the Governor’s Office advocating for better internet in the area on behalf of her grandchildren and all the other residents.

HARTS — Even as schools have operated on an entirely remote basis in Logan County since March due to the COVID-19 pandemic, lack of reliable high-speed internet access continues to plague parts of the region.

A prime example is Main Harts in Logan County, where about 30 to 40 residents gathered at the Main Harts Creek Volunteer Fire Department on Thursday, Sept. 10, to discuss the issue with local officials and Pittsburgh-based Wall Street Journal reporter Kris Maher. The gathering was in part thanks to Alma Blair, a retired school bus driver of 31 years who said she wants better internet access for her grandchildren.

“Truthfully, I’m going to be 80 years old here right away. I don’t need the internet my own self, my grandchildren need it,” Blair said. “I’ve got two granddaughters that’s in nursing training in nursing school, in college. I’ve got one granddaughter that’s in the 11th grade, got one in the 7th grade at Chapmanville, and got a little great-grandson in the 4th grade down here at Hugh Dingess, and they all need the internet. All these kids need internet over here to do their homework so they can, you know, pass and do good in school.”

Blair’s frustrations led her to contact attorney Brian Abraham of Gov. Jim Justice’s office, which in turn led to Maher’s visit to spotlight the issue on a national scale. Blair said Abraham told her that money has been appropriated for better internet infrastructure in the area, but many Main Harts students must travel elsewhere to complete their work.

“Even our phones are bad over here,” Blair said. “The phones are bad. Internet’s bad. We don’t have internet. Some of them have internet, but it’s still not good. I don’t have it, but some of them do. It’s not good, though. It’s not good enough for these kids to do their homework. They need it, they really need it. I’m working for the kids. I’m in it for the children, because I know all these children. A lot of these grown-ups, I hauled on the school bus.”

Most of the area’s residents who do have internet access have a satellite-based service like HughesNet, which they say can be spotty at times and with speeds not adequate for an entire day of Zoom-based classroom instruction. On top of that, residents complain of speed throttling after so much data is consumed.

Katrina Hensley has been working from home ever since the COVID-19 pandemic began and watches her grandchildren — one of whom is in the first grade — two to three times per week. She says she has never had access to any kind of cable television or internet access, and relies off of satellite internet through HughesNet.

“If, like, I have two cell phones in my house and two laptops, the more you put on the WiFi, the slower it gets,” Hensley said. “That’s where my issue is. Once they (grandchildren) get there, everything slows down to almost dial-up. I have HughesNet, which gives you a certain amount of speed, but it’s gone within a week.”

Internet customers on one side of Harts are typically covered by Armstrong Communications, which is based in Hamlin. However, Hensley said the line for higher-speed internet options stops approximately at the fire department where they gathered.

Hensley said she has been pleading with officials to expand access for about 10 years. She also did not speak favorably of the WiFi hotspots that have been set up at schools and other locations throughout the county.

“What bothers me is we still don’t have an answer of when we can get it,” Hensley said, “and with the kids in school, I mean, we have a lot of kids on this three-mile stretch, and they’re the ones that’s really suffering right now. Going to a WiFi hotspot is ridiculous, in my view. I think, a kid has to go to a parking lot and sit there and do their work in a vehicle? I’ve never heard of anything so silly. That’s ridiculous!”

Around three years ago, Sabrina Tomblin says she was told by an engineer with Frontier that money had been appropriated for internet infrastructure in the area and that the entire Mountain State would have access to high-speed internet within two years. That still hasn’t happened.

Just over the mountain from Main Harts in the community of Mud Fork, residents there have access to high-speed internet. Tomblin, who is also a HughesNet customer, says her internet isn’t even fast enough to take a WiFi call and her 15-year-old son, a student at Chapmanville Regional High School, has to go to his cousin’s house at Mud Fork to do his schoolwork.

“HughesNet’s OK for just browsing, but you can’t watch videos, stream music and stuff like that,” Tomblin said. “It’s moderately fast, but not good enough.”

Benny Runyon described his HughesNet experience as “awful,” noting speed and connectivity issues depending on factors like weather conditions. A night shift tow-truck driver, Runyon doesn’t get a lot of sleep between his job and driving his 17-year-old son, a senior at Chapmanville Regional High School, to his sister’s house in Holden to do his work.

“I’ve got to drive about 35 minutes every day there and let him do his school, and then drive 35 minutes back every day and then by the time you work all night long, you ain’t getting much sleep and then you can’t even get decent internet at your house for your kid to do his work, so you’ve got to take him somewhere to get it done,” Runyon said. “It makes it hard. ... That’s all I care about is my kid being able to get the education he needs.”

Like others, Runyon said he has heard promise after promise of better internet infrastructure over the years. He said that he has personally called all the major internet providers, such as Suddenlink, Armstrong and Frontier, and that he has been told that it’s “not worth their time” to provide service in that area.

“That’s what they tell me, and it ain’t right, because we might not be a whole lot of houses and we might not be a whole lot of people, but I think if we’re willing to pay to get the service for our kids, I think in the long run, it should be worth it to them to help our kids, because kids are our future,” Runyon said. “They’ve got to have their schooling in order to be our future, so I don’t get why they don’t want to do what’s right and run the service. It’s not asking a whole lot.”