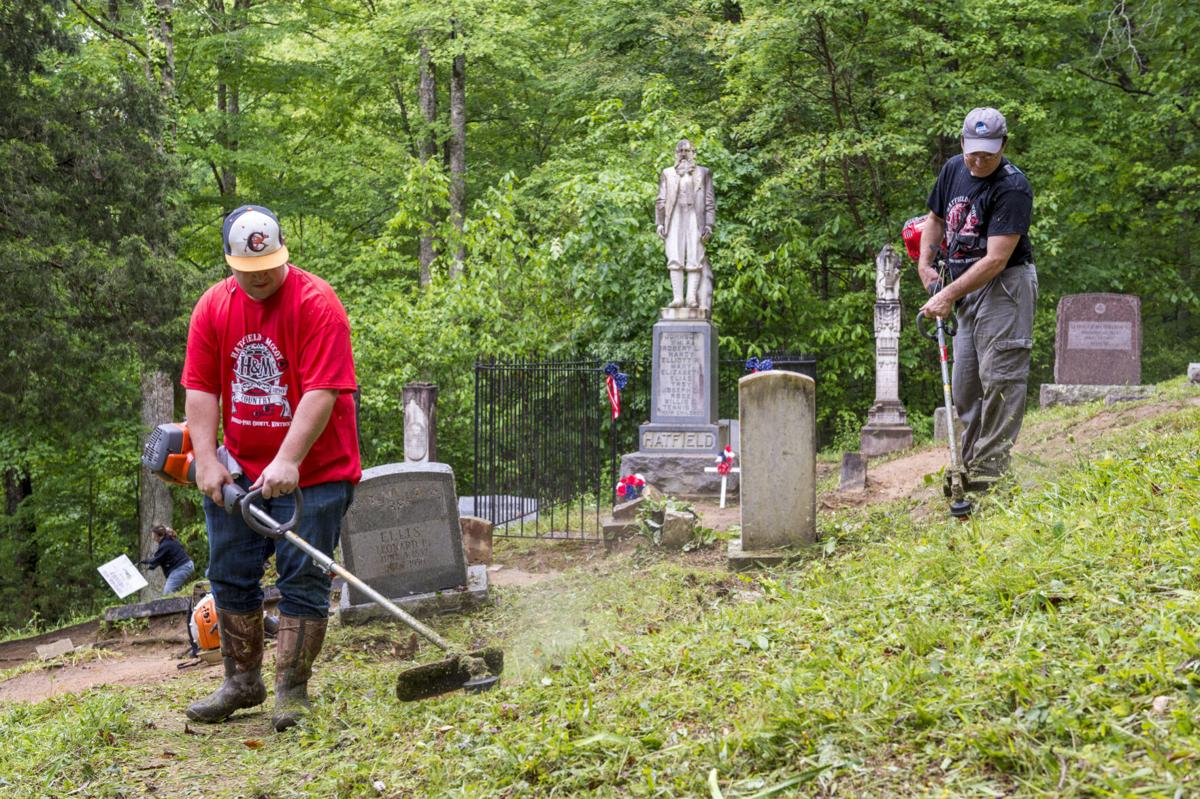 Jacob and Ron McCoy, descendants of the McCoy family in the famous Hatfield-McCoy feud, trim the historic Hatfield Cemetery at Sarah Ann on Saturday. Behind them, center, is the grave and monument of Captain Anderson “Devil Anse” Hatfield. 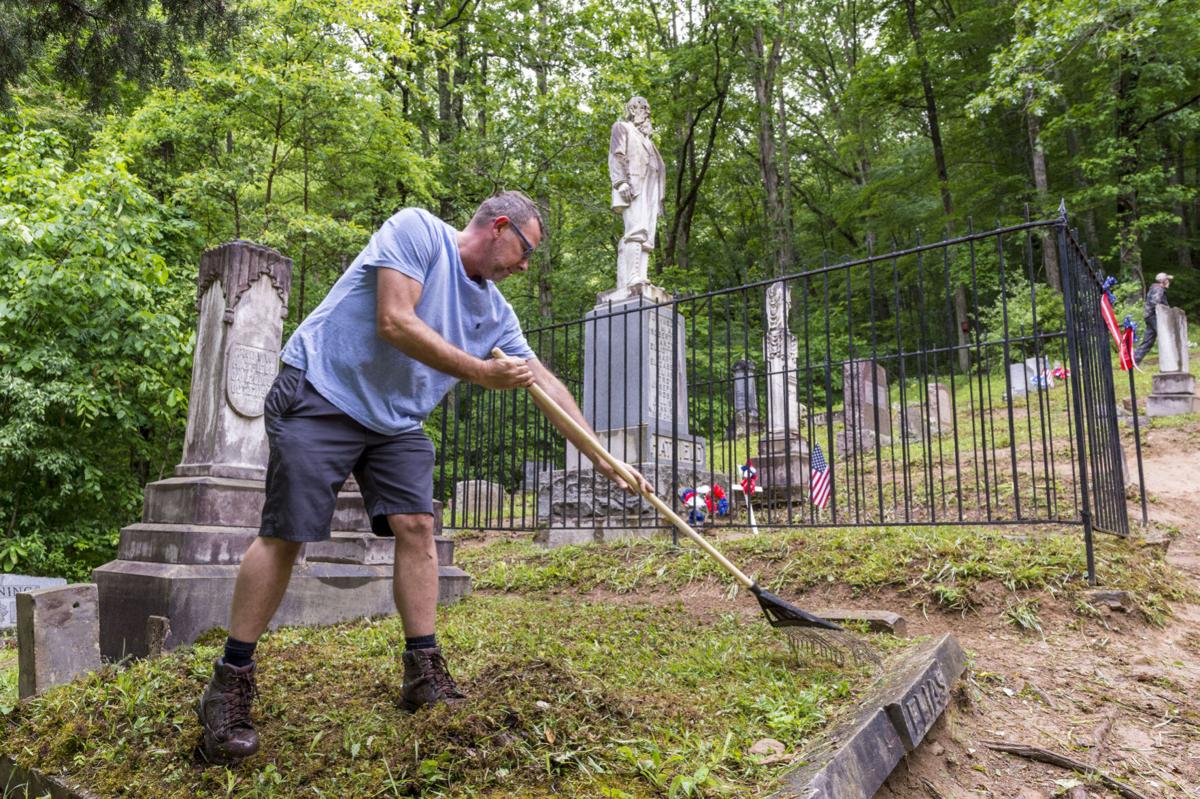 Jacob and Ron McCoy, descendants of the McCoy family in the famous Hatfield-McCoy feud, trim the historic Hatfield Cemetery at Sarah Ann on Saturday. Behind them, center, is the grave and monument of Captain Anderson “Devil Anse” Hatfield.

SARAH ANN — The historic Hatfield Cemetery at Sarah Ann received a big touchup Saturday morning and afternoon thanks to several volunteers — some of whom included descendants of the McCoys, the family the Hatfields once infamously feuded with.

Over the past four years, Tony Tackett, executive director of tourism in Pike County, Kentucky, has organized the cleanup effort of the cemetery just before Memorial Day. With the help of volunteers and tourists, cleanups also include other sites such as roadways and other historic places like the McCoy Cemetery in Kentucky.

“Tourists come across Virginia, West Virginia and Kentucky lines, and they don’t know about the lines. They don’t know anything about the state line, the city line or the county line, and they could care less,” Tackett said. “What they care about is inviting people that we’re known to be and clean, respectful of our cemeteries and historic sites. If it takes crossing the Tug River to clean a cemetery, we clean a cemetery.”

More than 100 tourists showed up — many traveling via ATVs — to the cleanup, which included weed-eating, mowing, raking and cleaning of graves. According to Tackett, the efforts have been ongoing in the region over the past three weeks. At the end of each cleanup, an American flag and a wreath are placed.

Among the cleanup crew at the Hatfield Cemetery were some notable guests. Ron McCoy is the great-great-great-grandson of Randolph “Randall” McCoy, who was the patriarch of the original McCoy clan involved in famous feud with the Hatfield family in the late 19th and early 20th centuries.

McCoy, who lives in Durham, North Carolina, was there with his son, Jacob. He described helping clean the cemetery as an honor.

“We try to come back here a couple times a year and preserve our heritage and our history,” McCoy said, “and we like to cross over into West Virginia and take care of the Hatfields, too. It’s part of our legacy. It’s an honor and a privilege, really.”

McCoy quipped that he is curious whether his own grandfather would have approved of his actions.

“I sometimes wonder if my grandfather would approve, honestly,” McCoy said. “His grandfather, Sam, was the son of Randolph, so he grew up listening to stories from his grandmother, so he had a real prejudice against the Hatfields, but for me, it’s a shared history that we honor, and it’s a privilege to be up here doing it.”

Brandon Kirk, a local author, historian and an associate professor of history at Southern West Virginia Community and Technical College, was also involved in Saturday’s cleanup. He said such efforts are crucial to attracting even more economic development through tourism.

“Most of us who live here realize the power and importance of our regional history,” Kirk said. “Many of us are collaborating and networking and brainstorming how to process, package and promote this history for today and tomorrow, for both locals and visitors. It’s important that we tell our story while partnering with others to bring it forward. We have to get this right. Our history is worth preserving. Doing it properly is important out of respect to those who came before us.

“It’s also a crucial piece of regional economic development,” Kirk added. “Regional economic development requires that we lift up our important history. Heritage tourism is real — it translates into dollars. It adds a piece to the diversification puzzle. Maintaining and promoting our historic sites, and taking care in getting the history right, is absolutely vital to our future.”

Tackett said anyone who would like to be involved in a cleanup event may call 606-432-5063 or email director@tourpikecounty.com.

The cemetery at Sarah Ann is one of two resting places for the Hatfield family; the other is located in the community of Newtown in Mingo County. The Sarah Ann cemetery has been listed on the National Register of Historic Places since 1980 and includes the grave of Captain Anderson “Devil Anse” Hatfield.