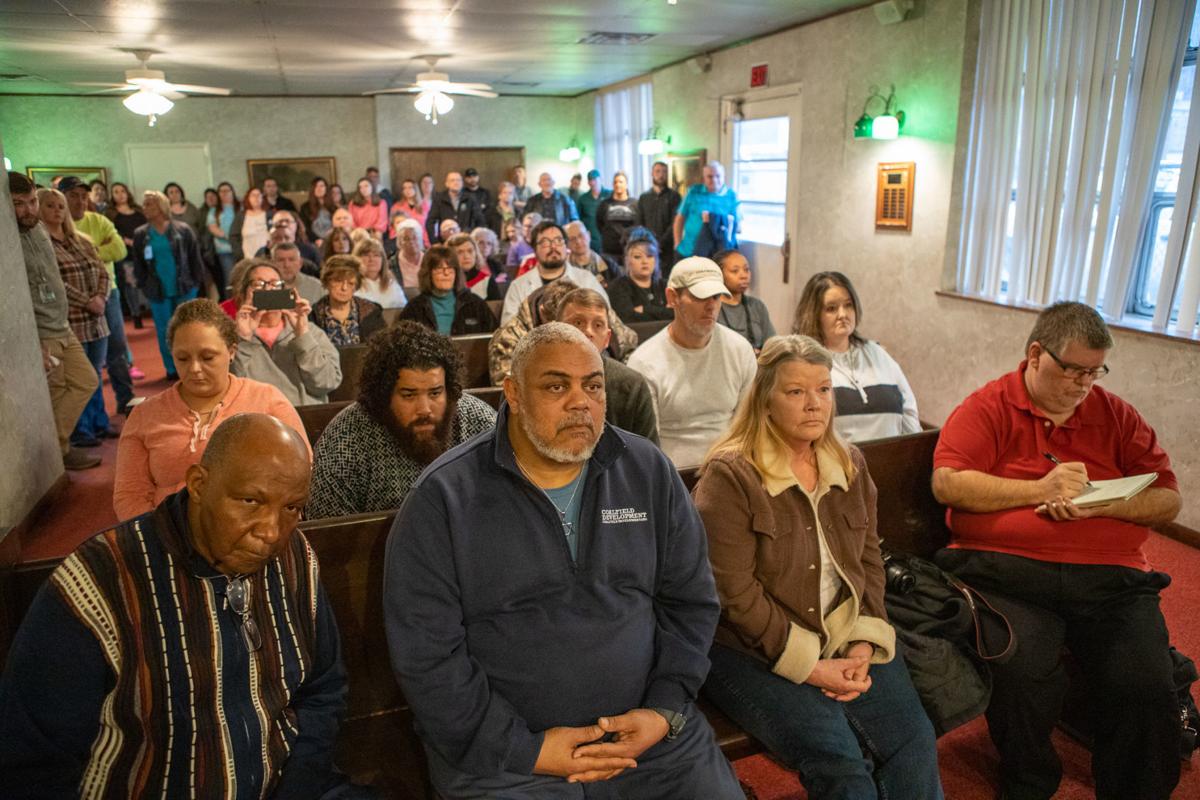 A standing-room-only crowd was present for a discussion about possible revocation of Serenity Pointe’s business license on Tuesday, Feb. 11. The floor was opened to public comments, and all who spoke were in favor of keeping Serenity Pointe open. 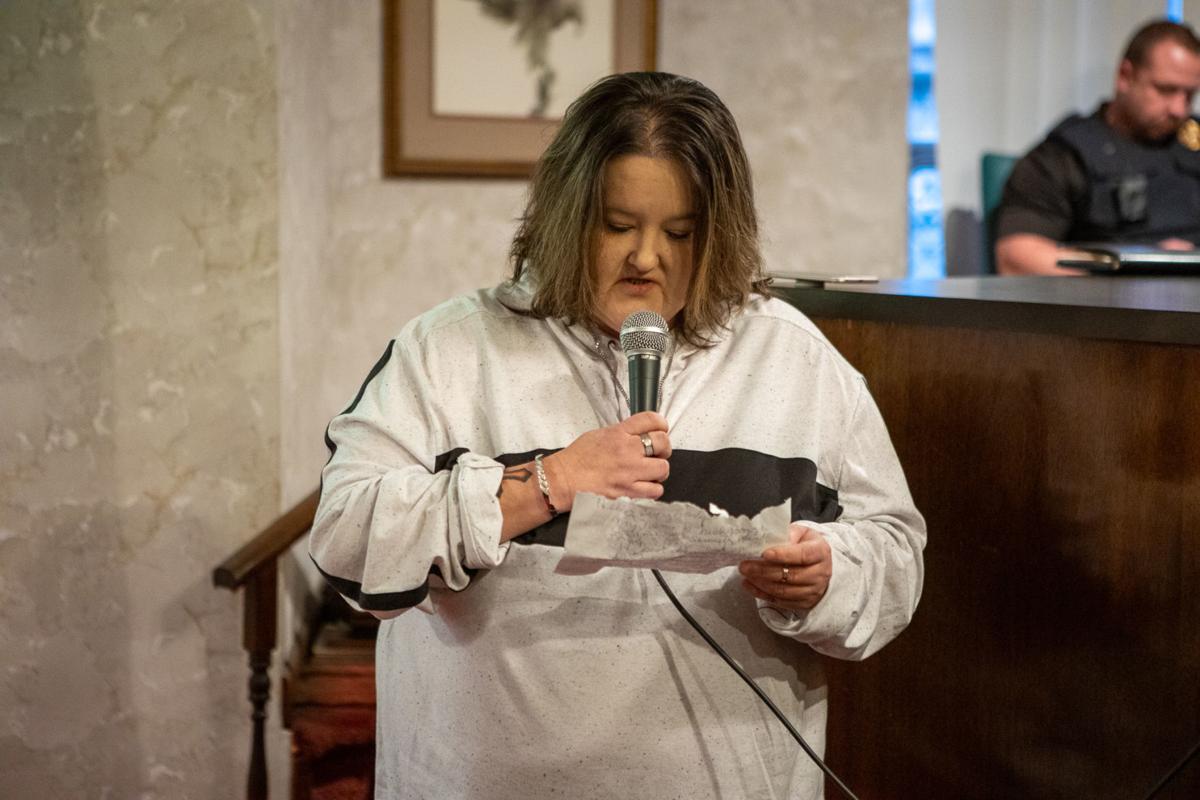 Dylan Vidovich/HD Media Trish Boggs told Williamson City Council on Tuesday, Feb. 11, that she is now 10 months sober, has her son and family back in her life and her own apartment after going through recovery at Serenity Pointe. 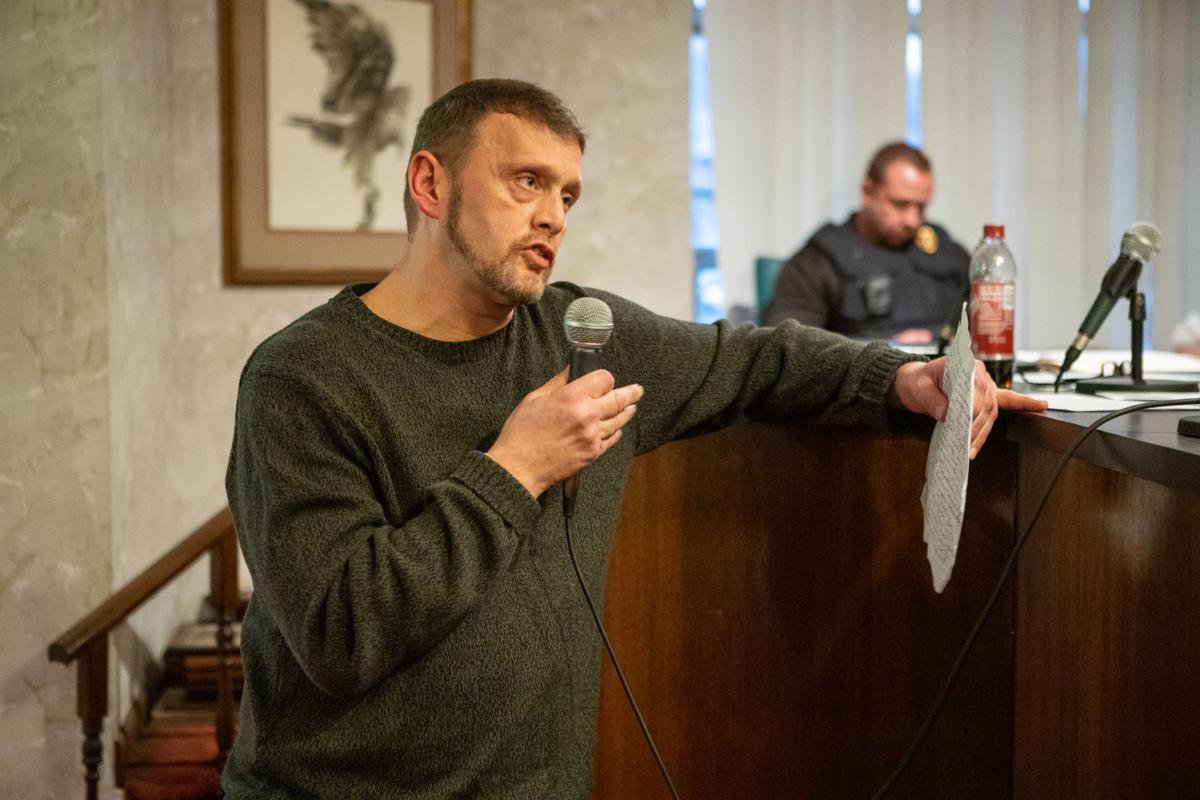 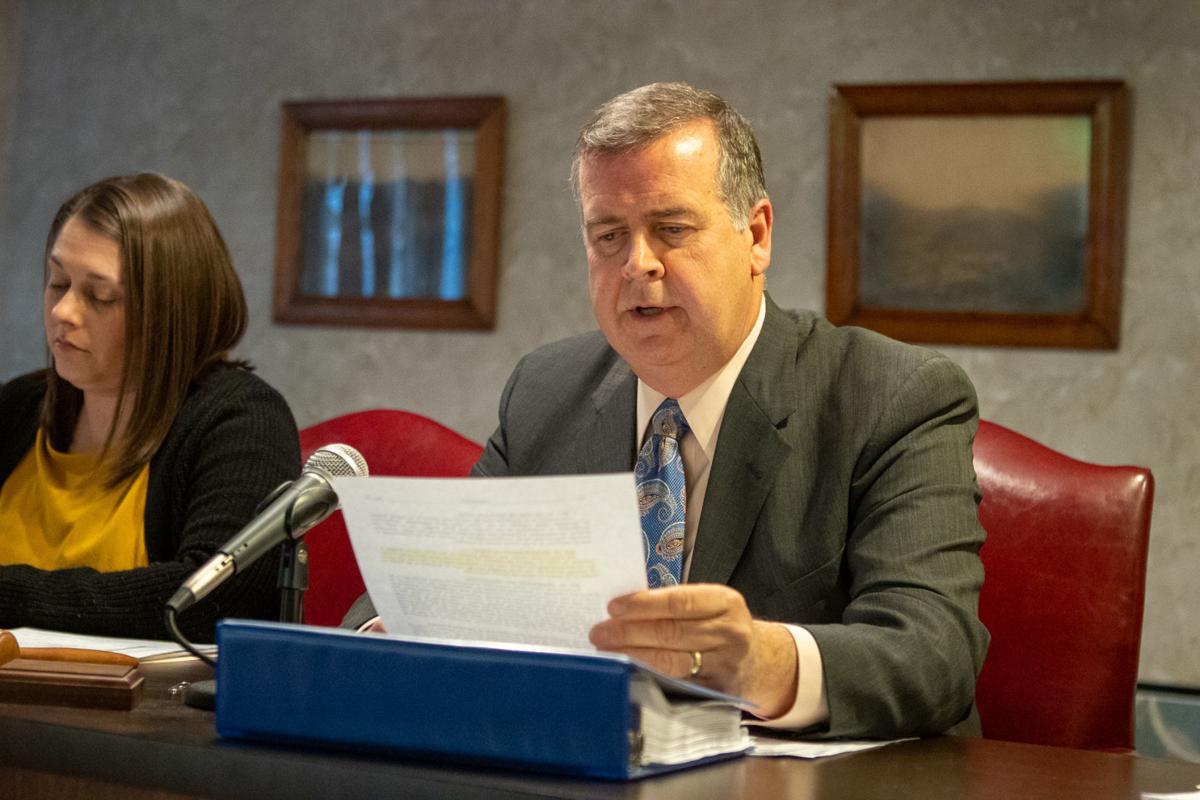 Williamson Mayor Charlie Hatfield reads from section 25 of the city’s charter, which deals with revocation of a business license, during a discussion about possibly revoking Serenity Pointe’s business license during the city council’s regular session Tuesday, Feb. 11. 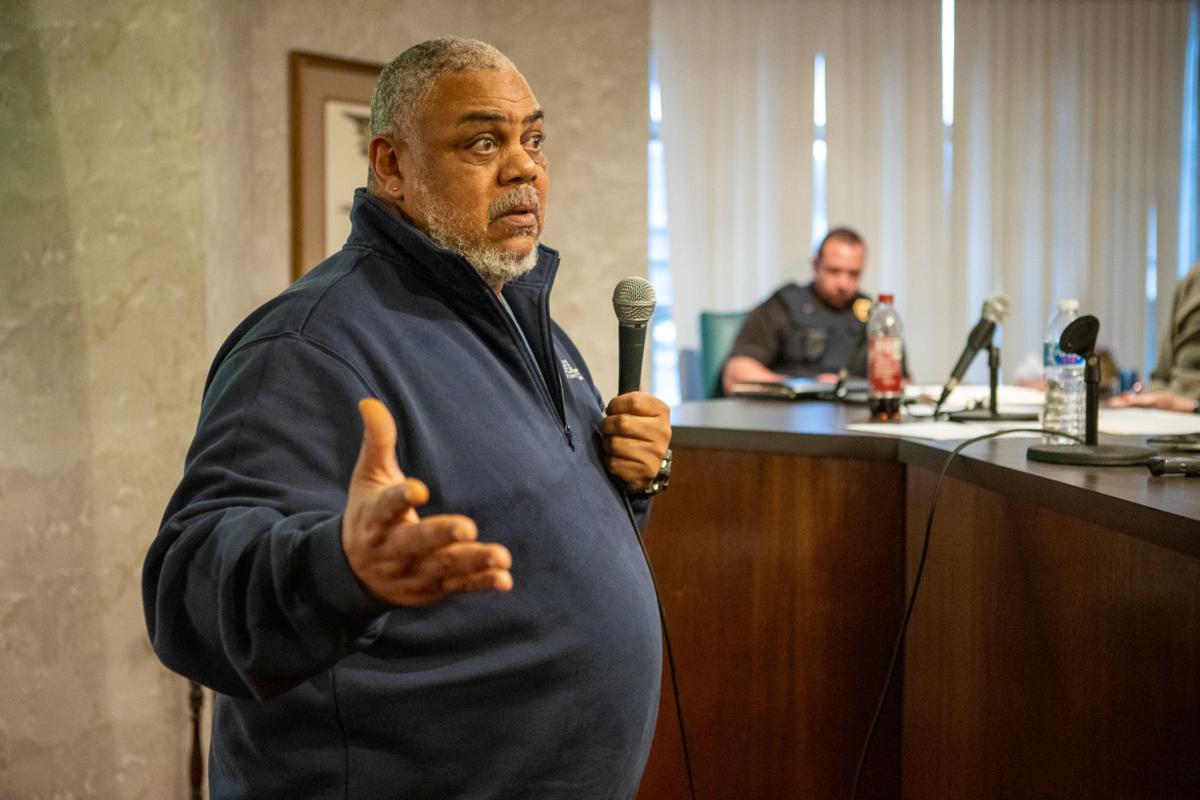 A standing-room-only crowd was present for a discussion about possible revocation of Serenity Pointe’s business license on Tuesday, Feb. 11. The floor was opened to public comments, and all who spoke were in favor of keeping Serenity Pointe open.

Dylan Vidovich/HD Media Trish Boggs told Williamson City Council on Tuesday, Feb. 11, that she is now 10 months sober, has her son and family back in her life and her own apartment after going through recovery at Serenity Pointe.

Williamson Mayor Charlie Hatfield reads from section 25 of the city’s charter, which deals with revocation of a business license, during a discussion about possibly revoking Serenity Pointe’s business license during the city council’s regular session Tuesday, Feb. 11.

Serenity Pointe, located at the old Sycamore Inn in downtown Williamson, has been marred with controversy since it was first discussed in 2016. Operated by the Mingo County Housing Authority, Serenity Pointe is a 60-bed facility that opened in April 2018 and houses both men and women in drug recovery.

Williamson Mayor Charlie Hatfield, who lobbied against Serenity Pointe’s opening even before his election to mayor, also called for its closure. Additionally, Police Chief Grady Dotson said that police calls to the facility are numerous and that it is not being operated properly.

A standing-room-only crowd of individuals both for and against the facility packed into the council’s chambers during the regular session Thursday, Feb. 13, for the posted agenda item that read “discussion of Serenity Pointe’s business license and multiple complaints.”

The first comment about Serenity Pointe came from Williamson Planning and Zoning Board President John Burchett early in the meeting. During a discussion about trash issues near the city’s riverfronts, Burchett said that people evicted from Serenity Pointe are adding to the problem.

When the agenda item came up, Hatfield read from section 25 of the city’s charter, which deals with revocation of a business license. Under the charter, proper notice must be provided regarding the charges for removing the business license, and the licensee — Serenity Pointe, in this case — is entitled to a public hearing in front of council.

“The issue was brought up amongst those multiple complaints about renewal of a business license,” Hatfield said. “The city doesn’t have a lot of powers, but that’s one of them.”

Hatfield asked council for a motion to have city attorney Nathan Brown draft a plan to send a notice and have the public hearing. Councilman Ralphie Hall made the motion, but it failed when the other three council members declined.

Councilman Randy Price said he is going to have to “rely heavily” on Brown’s legal advice before he can make such a decision, and requested the issue be deferred to a later date. He also requested to speak with Brown privately about the matter first.

“I’m going to have to talk to Nathan and see what the legal ramifications are,” Price said. “For or against, I want to make sure that I am totally clear with what the state statute and what federal statutes are regarding removal of a business license for a legitimate business. I’m just not comfortable making a vote on that tonight.”

Council then voted to withdraw the motion and defer it to the next regular meeting, or a special meeting that may be scheduled before.

The floor was opened to public comments, and all who spoke were in favor of keeping Serenity Pointe open.

Rakeem Saydid, a one-year resident of Serenity Pointe, spoke of the “goliath” of drug addiction in Williamson.

“I’ve been a client there for a year, and my whole life’s changed,” Saydid said, “and I don’t mean just not being a drug addict. I mean as a proper citizen who is willing to sit down with people of stature. That’s what I see you all as. Every war is going to have its casualties. We have issues at that place, but we don’t have all the issues that’s been blown up. Check your dispatch — the police ain’t been called that many times. I mean, that’s just my personal opinion. These homeless people that we speak about, there’s not evictions going on there. Every once in a while, one or two might not make it, and they go.

“Some of us want to give back,” Saydid added. “When I first got here a year ago, we were cleaning up the city. I want a chance to do that again. I want to clean up part of the building that burned down. A lot of us do. We want to give back.”

Resident Jimmy Smith said he had been an addict for 13 years.

“I’ve been in and out of recovery, and I never actually knew recovery until I went to Serenity Pointe,” Smith said. “I also found a personal relationship with God, and that’s something I never had before, either. God’s will is being done through (Mingo County Housing Authority Executive Director) Belinda Harness. She has brung recovery to this region. Serenity Pointe has saved so many lives, and it has saved mine. You need to get to know us, we have so much to offer. We would love to help clean up this town and do some community service, because service work is number one in recovery. Instead of downing and judging us, why not praise and support us?”

Trish Boggs came to Serenity Pointe after a 12-year battle with addition that led to losing custody of her son and her family’s support. She said coming to the facility was the best decision she has ever made. She added that she is now 10 months sober, has her son and family back in her life and her own apartment.

Wes Thomasson described himself as a “community advocate” for Serenity Pointe because of the “positive change” it is bringing to the community. Thompson said Serenity Pointe is the only place in the region that is actively combatting the underlying problem of addiction, and said that at least 10 residents of the facility are now successfully integrating back into regular society.

“What if our county was no longer known for addiction and poverty rate, but we became the platform for recovery?” Thompson said. “As it stands right now, the trail riders even … they hesitate coming here because they can look on the internet to see our drug problem, and it’s affecting our economy, and if we take away treatment and refuse away true recovery from substance abuse, we’re not only doing a moral and civil injustice, but we’re depriving our community of potential tourism and potential revenue. If we shut down Serenity Pointe, we do a detriment to ourselves and our local economy and our community.”

Cody Justice, an employee of Serenity Pointe, fired back against some previous claims of how the facility operates, such as residents being evicted for failing a drug test.

“When they fail a test or they mess up or whatever, we do not put them on the street,” Justice said. “I’ve worked there for 10 months. I can, maybe, think of one or two who decided against our advice just to walk out, and at the end of the day, they’re a grown adult. Any one of you could check yourself out of the hospital if that’s what you want. At the end of the day, that is their choice.”

Justice also said Serenity Pointe’s residents do not roam the streets of Williamson at night, as one person in the audience claimed.

“I heard a comment in the back that said at night, they roam the streets. Curfew is 9 o’clock,” Justice said. “At 9 o’clock, doors are locked, they’re on their own floor, and at 10 p.m., they’re in their own units.

“Also, I hear that we cause trash problems,” Justice said, in response to Burchett’s comment from earlier in the meeting. “Again, I don’t kick people on the street, and if I did, what trash do they have? They don’t even have money most of the time.”

Following the comments, Hatfield continued the meeting with no further discussion. As of press time, no special meetings have been scheduled concerning the hearing procedures.