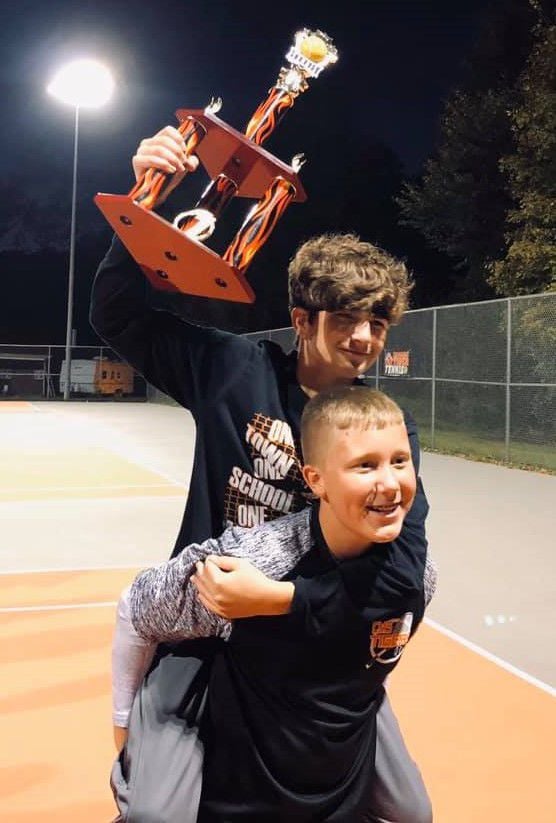 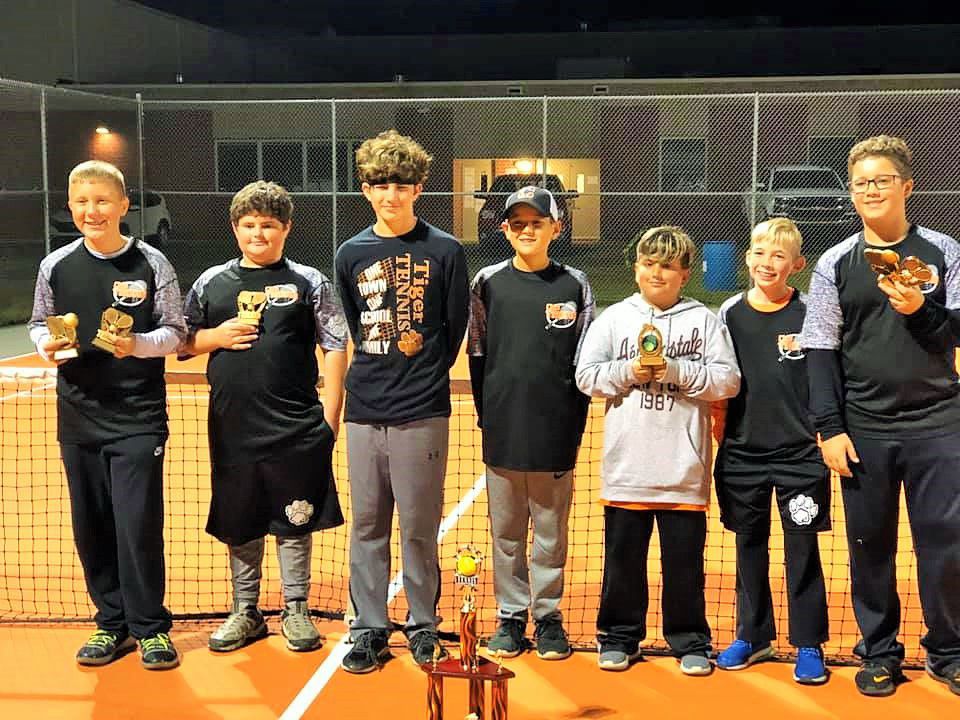 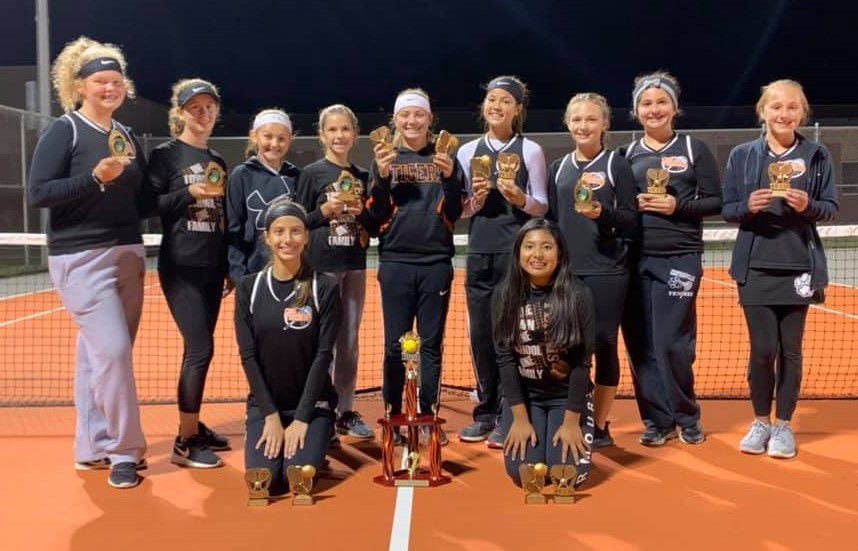 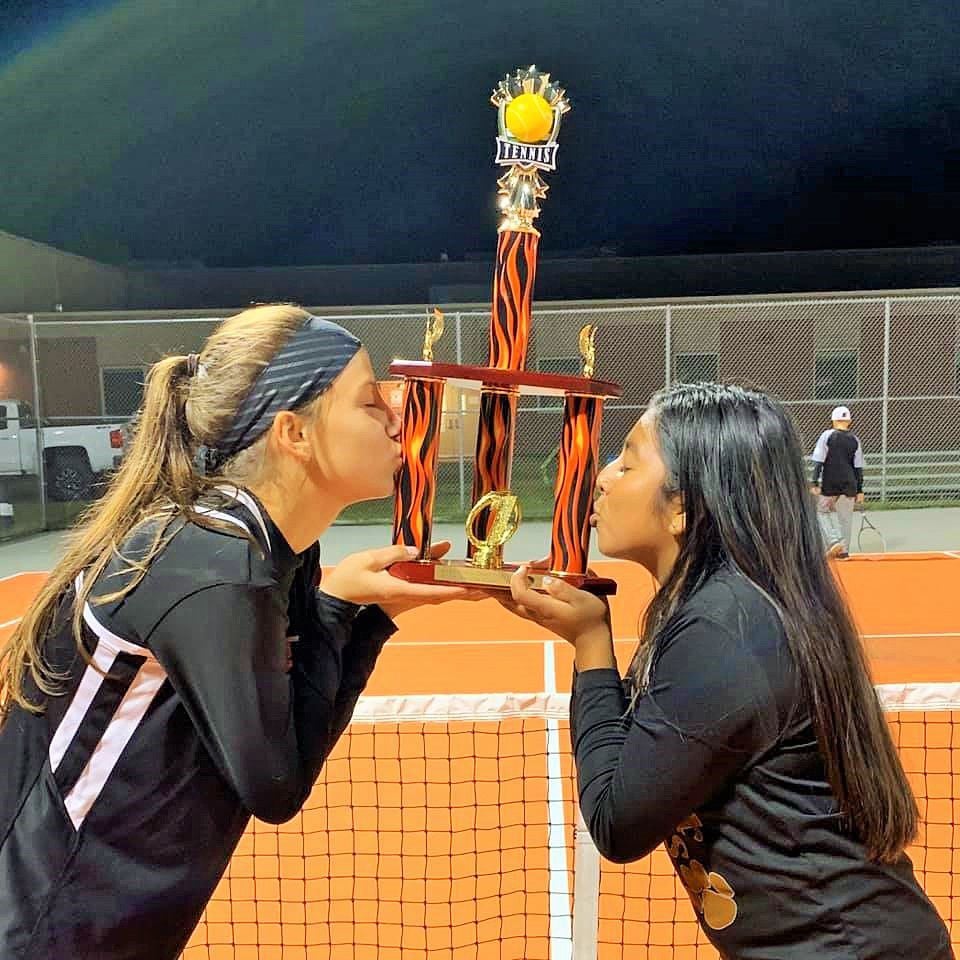 CHAPMANVILLE — There’s dominating performances and then there’s this.

The Chapmanville Middle School boys and girls tennis teams, which have mostly rolled through the competition all season, nearly made it a sweep last Saturday at Chapmanville as the Tigers rolled to season-ending Black Diamond Conference championships on both sides.

How dominating were the Tigers?

The Chapmanville girls’ tennis team completed a 17-1 season that saw them set the school record for wins in a season. The only setback was a 4-3 loss to Hurricane. CMS finished off a three-year run of going 42-2.

The CMS boys were just as dominant. The Tigers also set a school record for most wins in a season with a 16-2 mark even though five out of their seven athletes were first-year players.

CMS could be a force to me reckoned with as 17 out of 19 players are underclassmen.

Chapmanville coach Chris Kidd, in his 10th year at the helm, said this season was rewarding and also fun.

“These kids are absolutely incredible, and not just on the tennis court, they make every day so much fun with their personalities, their energy, and their sense of humor,” Kidd said. “I’ve coached so many wonderful kids over the years and this group and all of the other teams I’ve had have made coaching so rewarding and worth every second of what I get to do. What they accomplished this year was so deserved because of all of the hard work they put in from June until now.”

In singles action, the Chapmanville girls top player, Courtney Curnutte, ran through the field, as she defeated Katie Grimmett of Man in the semifinals 6-0, and then took the title in the finals over Marci Frye of Madison 6-0.

In No. 2 singles action, Chapmanville’s Emma Bryant also dominated play as she defeated Man’s Kendra Workman in the semifinals 6-0 before winning the championship over Sherman’s Anabeth Keith 6-0.

In No. 3 girls’ singles, Chloe Murphy of Chapmanville defeated Draven Short of Man 6-0 in the semifinals, and then went on to win the finals 6-2 over Madison’s Halley Tudor 6-2. Chapmanville’s No. 4 seed Carmen Mahon would make it a clean sweep for the Tigers in singles, as she won 6-0 over Man’s Mackenzie Casey in the semifinals, and then took home the title with a 6-1 victory over Christian Price of Madison Middle School.

In girls’ doubles, No. 1 team Curnette and Bryant won 6-3 over Sherman’s Hope Keith and Anabeth Keith in the finals after downing Grimmett and Layla Noel of Man, 6-0, in the semifinals.

Chapmanville’s Chloe Murphy and Mahon were a 6-1 victor over Nehlyn Bowling and Emma Cabell of Sherman. The CMS duo beat Workman and Short of Man, 6-0, in the semifinals.

The Chapmanville doubles team of Sydnee Ward and Emily Hughes also took home a title with a 6-0 win over Madison, while Braylee Browning and Ava Collins of the Tigers also clinched their trophies by defeating Man 6-0.

In a mixed doubles final, Chapmanville’s Autumn King and Chase Bumgarner outlasted their opponents from Sherman 7-5.

On the boys’ side, the Tigers’ No. 1 seed, Colson Vance was a 6-1 winner over Man’s Cody Walls in the championship match. Vance won 6-0 over Madison’s Brock Dent in the semifinals.

In the No. 2 singles, Chapmanville’s Levi Daniels won 6-2 over Andrew Walls of Sherman in the finals. Daniels was a 6-1 winner over Madison’s Mason Weekly in the semifinals.

In the No. 3 singles, it was Sherman’s Ethan Bowne who took a 6-1 win over Luke Saunders in the finals.

In No. 4 singles, the Tigers; Blake Adams knocked off Sherman’s Brayden Mooney 6-2 to take the championship in his division.

In the doubles, more titles were to come for Chapmanville.

Vance and Daniels won in the No. 1 doubles with a 6-1 victory over Sherman’s Trent Keith and Wells.

In the No. 2 doubles, Chapmanville’s Saunders and Adams took a 6-1 win over Sherman’s Bowne and Mooney.

The final title to be decided would be in No. 3 boys’ doubles where Elijah Murphy and Gabe Conley of Chapmanville defeated Dakota Simpson and Gunnar Cline of Man, 6-1.

Coach Kidd said he was very happy with his team’s showing.

“I’m overwhelmed with how well they played all day, but not just today, it was all season,” Kidd said. “These kids were working toward this day since three-week practice in June, and to take 13 of the 14 titles and win both team championships is a testament to what they were willing to sacrifice to make this happen. Those that work the hardest will be the best, and these kids have all been willing to put in the work.”

Heading into the season, the experienced CMS girls’ squad was expected to do well.

“I knew coming into the season our girls team was going to be loaded because of all of the talent we had coming back and coming in, and sometimes living up to that expectation is the hardest thing, but these girls proved they had what it takes day in and day out even with a target on their backs,” Kidd said. “But they’re unlike a lot of teams I’ve had. They like being the hunted. They don’t want to be the underdog. We used to enjoy that, but they know they’re good and they want to be challenged and pushed. These were good girls’ teams we played here today, but our girls took it to another level when they knew they had to, and that’s what champions do.”

Kidd also had praise for his boys.

“I wouldn’t have guessed we’d have this level of success when we first started in June,” he said. “I only had two boys back from last year, and it was only their second year, and then we picked up five new players that had never played at all, but their work ethic was phenomenal. They all looked out for each other and rooted for each other and helped each other get better, and you don’t see that on every tennis team. And we had some really tough battles with Sherman’s boys this year. Every match was close all three times we played, so we expected today to be a fight, and fortunately for us, we rose to the occasion when we needed to. These kids have no fear, and you have to have that in tennis to succeed.”

Kidd also said he was thankful for all the support and help he received this season.

“Everyone involved should be proud of themselves for what they’ve helped us build here over the past 10 years, and I can’t wait to keep building this program, and this sport in our area,” he said. “It was a wonderful year with extraordinary people, and I’m very lucky I get to be a part of it every year.”