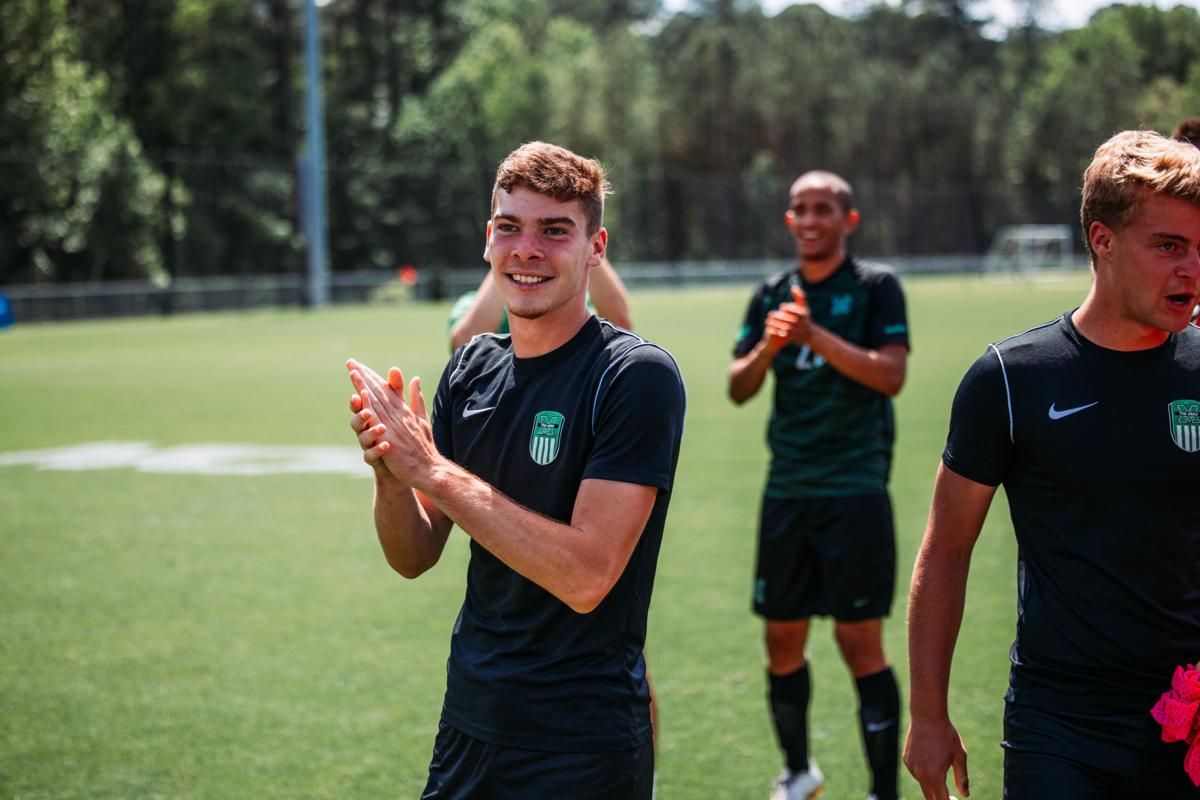 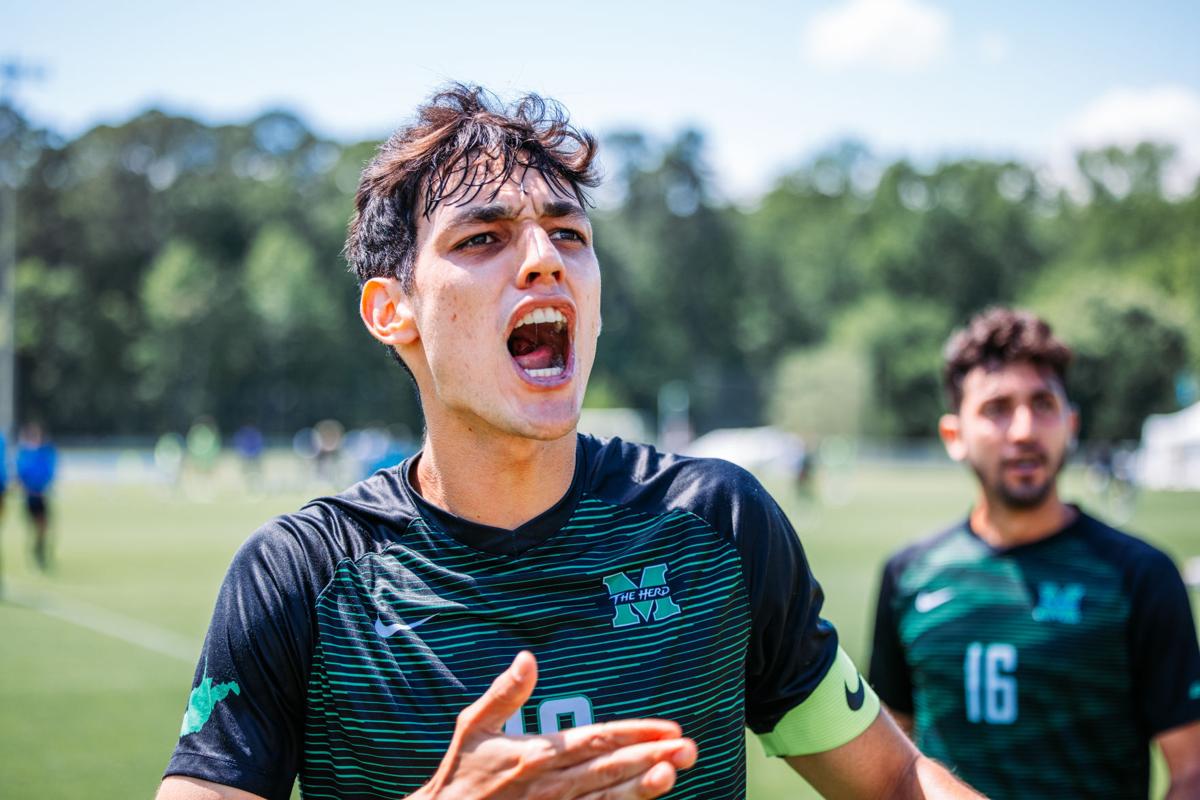 Yet Marshall head coach Chris Grassie has maintained throughout that the Thundering Herd’s goal is nothing short of a national championship.

That did not change on Tuesday when Grassie went through the NCAA College Cup press conference for coaches ahead of Friday’s 6 p.m. match against North Carolina, which will be shown on ESPNU.

“All season, we’ve tried to live on that knife edge of our goal, and we haven’t been scared to say it for a few years now,” Grassie said. “We’re trying to win a national championship.”

The Hoyas were the defending champions, having won the 2019 title, but Marshall played well throughout and capitalized on its chances en route to the victory.

That opportunity came in the 70th minute when Vitor Dias raced past the defense on a run before sending a ball over across to Jamil Roberts, who finished off the play with the match’s lone goal.

Herd goalkeeper Oliver Semmle then solidified the win with a pair of saves in the final minute to send the Herd to the College Cup where they meet North Carolina at 6 p.m. on Friday evening.

Given Marshall’s road, there were few who thought the Herd would be in this position.

None of that mattered, according to Grassie.

“With the conference championship in 2019 and again this year, I think the guys had more belief,” Grassie said. “We’ve always had that extra carrot — that vision in the future that we want to win a national championship.”

Grassie keeps dangling that carrot as the Herd continues its climb.

“You beat a No. 1 seed or you beat the former champs, but that’s not enough because they didn’t give us the trophy, so we keep focused on the destination ahead,” Grassie said. “The distractions or the ups and downs of the site, they are easier to manage that way.”

From an on-the-field standpoint, Marshall’s run has been an improbable one, which makes it more special.

When the Herd draw was announced, it came to a chorus of groans from fans at the Selection Show Watch Party as the team was aligned in a bracket with No. 1 seed Clemson.

To be blunt, no one even looked past that point to see that defending champion Georgetown may also be on the horizon.

At the time, Grassie calmly said that to be the best, the Herd had to beat the best and the team was focused one match at a time.

Following the opening win over Fordham, Semmle led the Herd past Clemson with his effort in penalty kicks. However, the focus was kept forward to a team that had plenty of NCAA Tournament experience in Georgetown.

Again, knocking off a defending champion was deemed improbable, but the Herd proved up to the task, silencing doubters with the 1-0 win, which led them to the College Cup.

The first win over Clemson got America’s attention. The win over Georgetown achieved provided credibility in an uneven sports playing field.

From an economic standpoint, it is the NCAA men’s soccer version of David vs. Goliaths with Marshall’s athletics budget at $32.9 million and the other three College Cup competitors — North Carolina, Indiana and Pitt — at least tripling that budget figure.

That gives Marshall an underdog title that has made them a fan favorite in North Carolina, even though the next match puts them against the home-standing Tar Heels, who will be 30 minutes from its campus when the teams meet at Sahlen’s Stadium on Friday.

Roberts, an Englishmen, even took to social media on Tuesday to dub the Herd ‘America’s Team.’

There is a bit of irony in the moniker, given that Marshall’s team has a typical starting lineup with just one American — that being Morgantown native and University High School product Collin Mocyunas.

In this year, however, it makes perfect sense for the Herd to be ‘America’s Team.’

When the COVID-19 pandemic struck, many of Marshall’s international players were unable to go home, keeping them in Huntington for nearly the entire last year without any visitation from family.

There was difficulty and struggle in the pandemic, and the Herd had to lean on each other to get through those tough times.

The COVID-19 difficulties showed on the pitch early in the season with Marshall’s first spring match being a 1-all draw with Division II Ohio Valley University in which they had to rally to earn that mark.

Marshall is now a far cry from the team that took the pitch on that cold Feb. 13 afternoon.

Now, they are the hottest team in college soccer as the final week of the season approaches.

Grassie said the struggles that the team went through due to the pandemic brought them closer and now, the team is reaping those rewards.

“I feel like the more we can stick together on the field, the more we can continue that friendship and brotherhood that they’ve got and support each other,” Grassie said. “That’s always our key — just work for your brother.”

Win or lose, the team is entering its final days of the run and Grassie wants to make sure they enjoy each moment of it — from each meal to each practice — while remembering the path to the College Cup.

“More than any other time, I’m just enjoying the process of it all and taking minute by minute, meeting by meeting, Zoom call by Zoom call, training session by training session,” Grassie said. “We’re just trying to really soak it all in and enjoy it.”