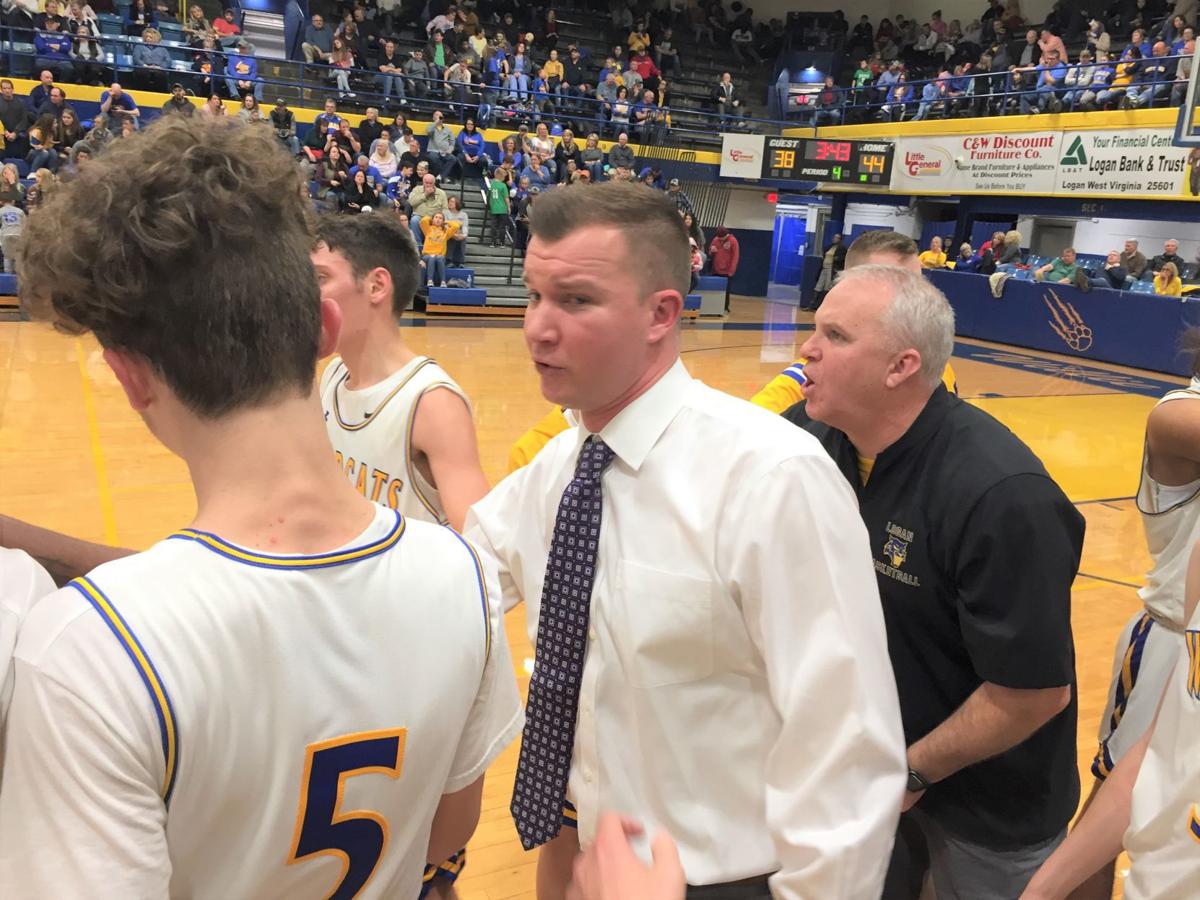 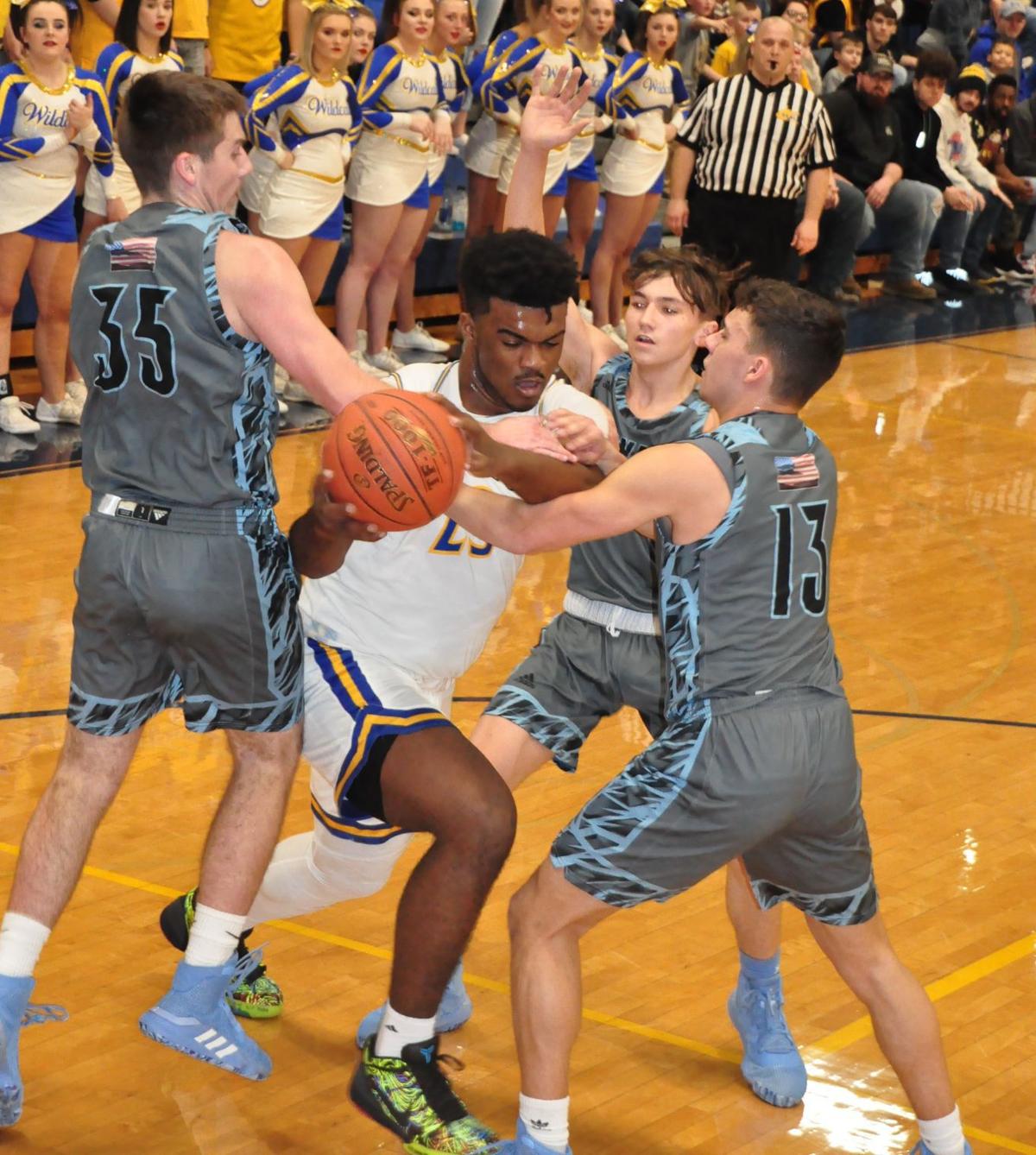 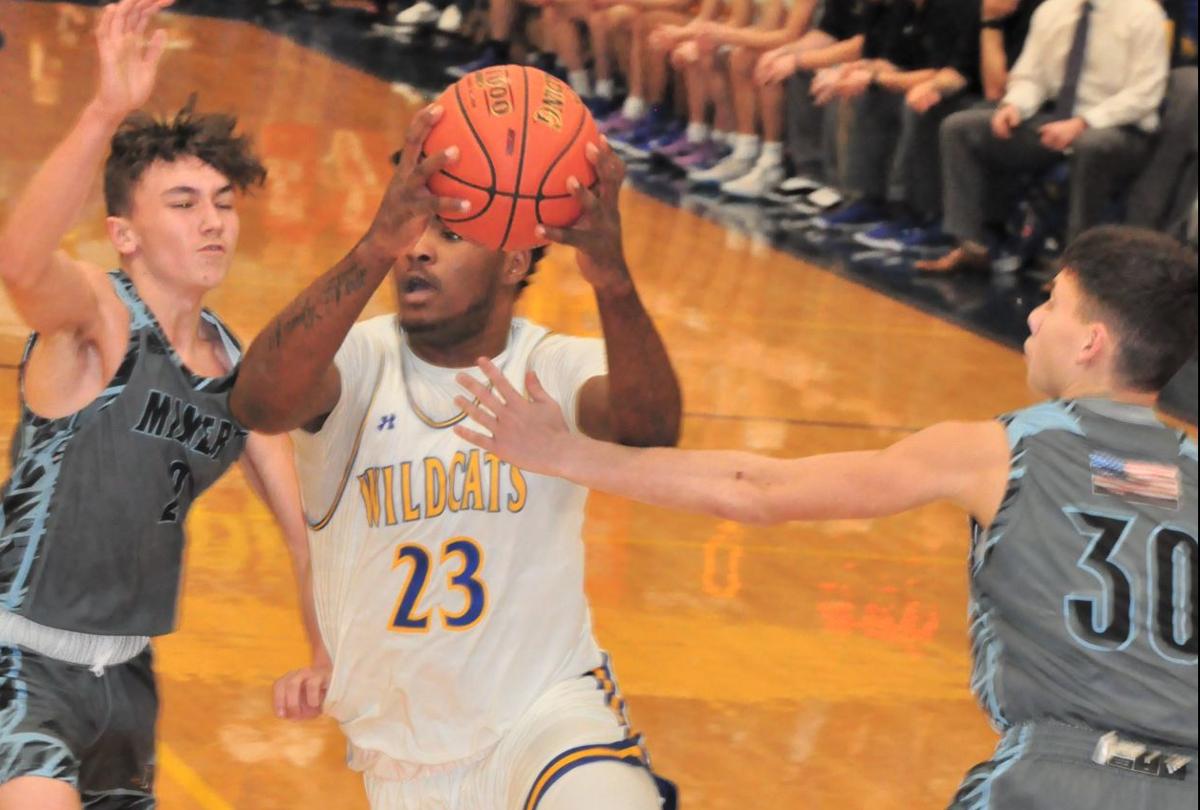 Logan High School’s David Early drives between two Mingo Central defenders in the Wildcats’ 50-48 win over the Miners on Tuesday, Jan. 28, 2020 at Logan. 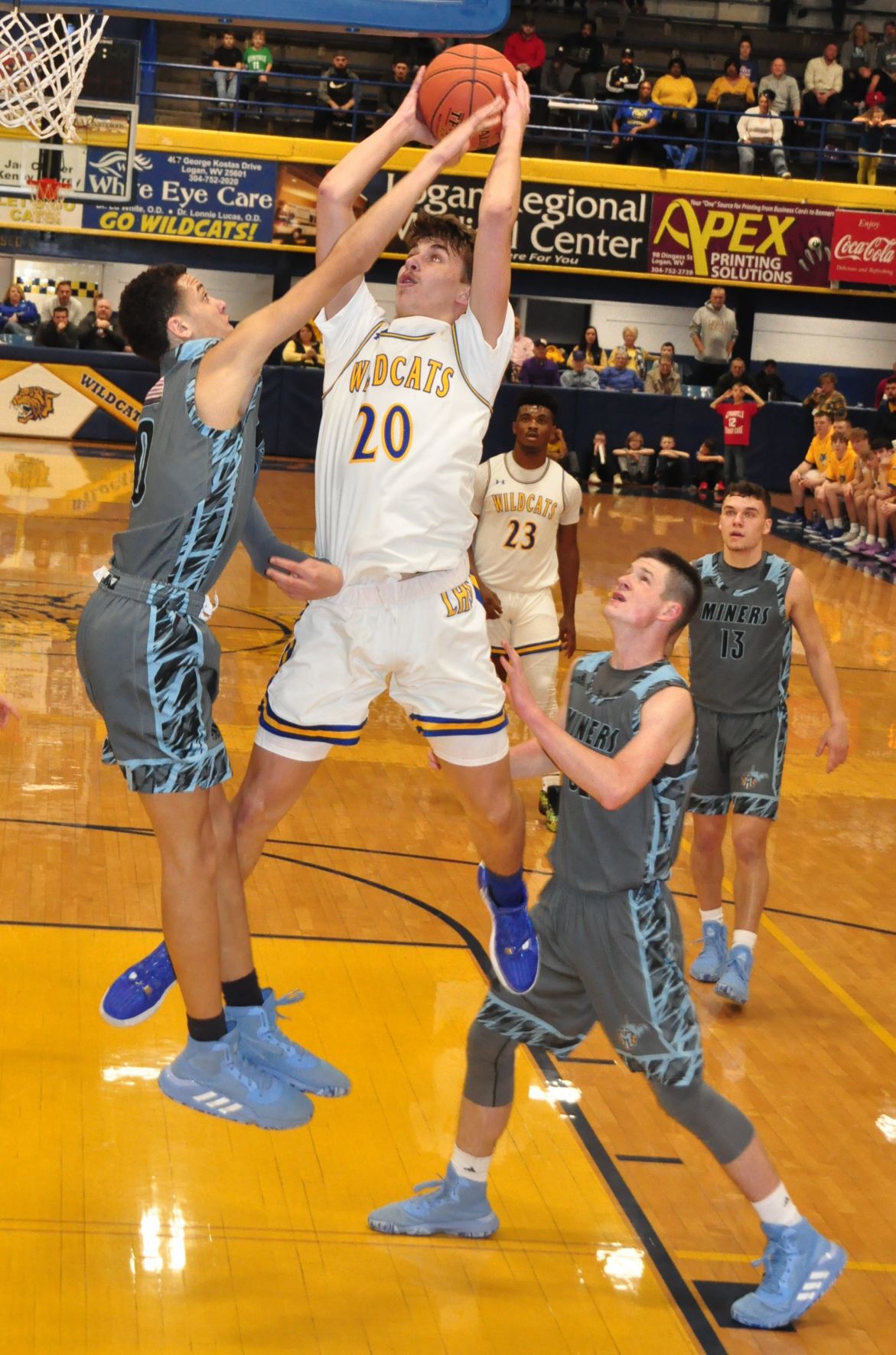 Paul Adkins/The Logan Banner Logan High School’s Mitchell Hainer (20) goes up for a shot in the paint in the Wildcats’ 50-48 win over the Miners on Tuesday, Jan. 28, 2020 at Logan. 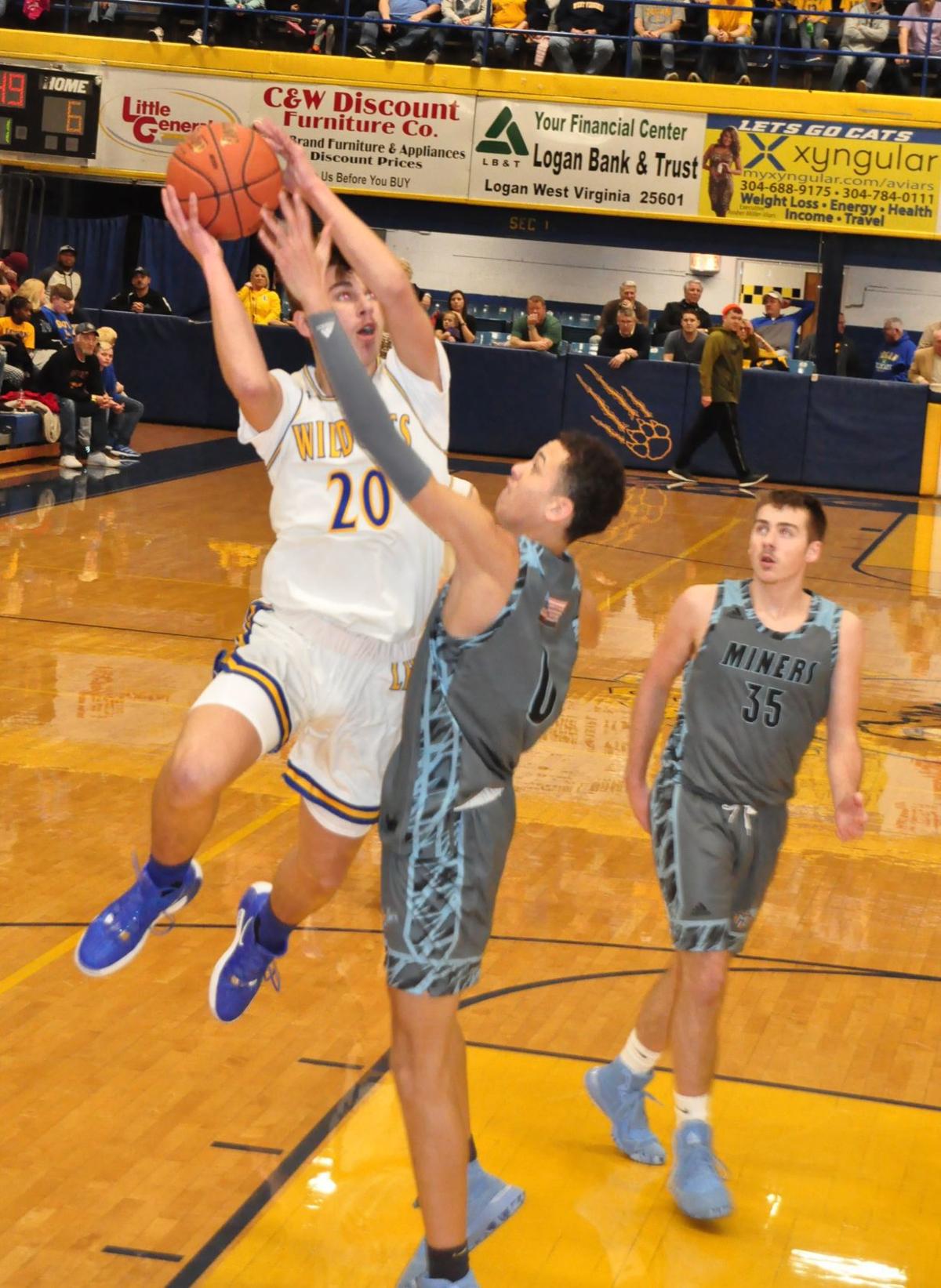 Paul Adkins/The Logan Banner Logan High School’s Mitchell Hainer goes up for a shot in the Wildcats’ 50-48 win over Mingo Central on Tuesday, Jan. 28, 2020 at Logan. 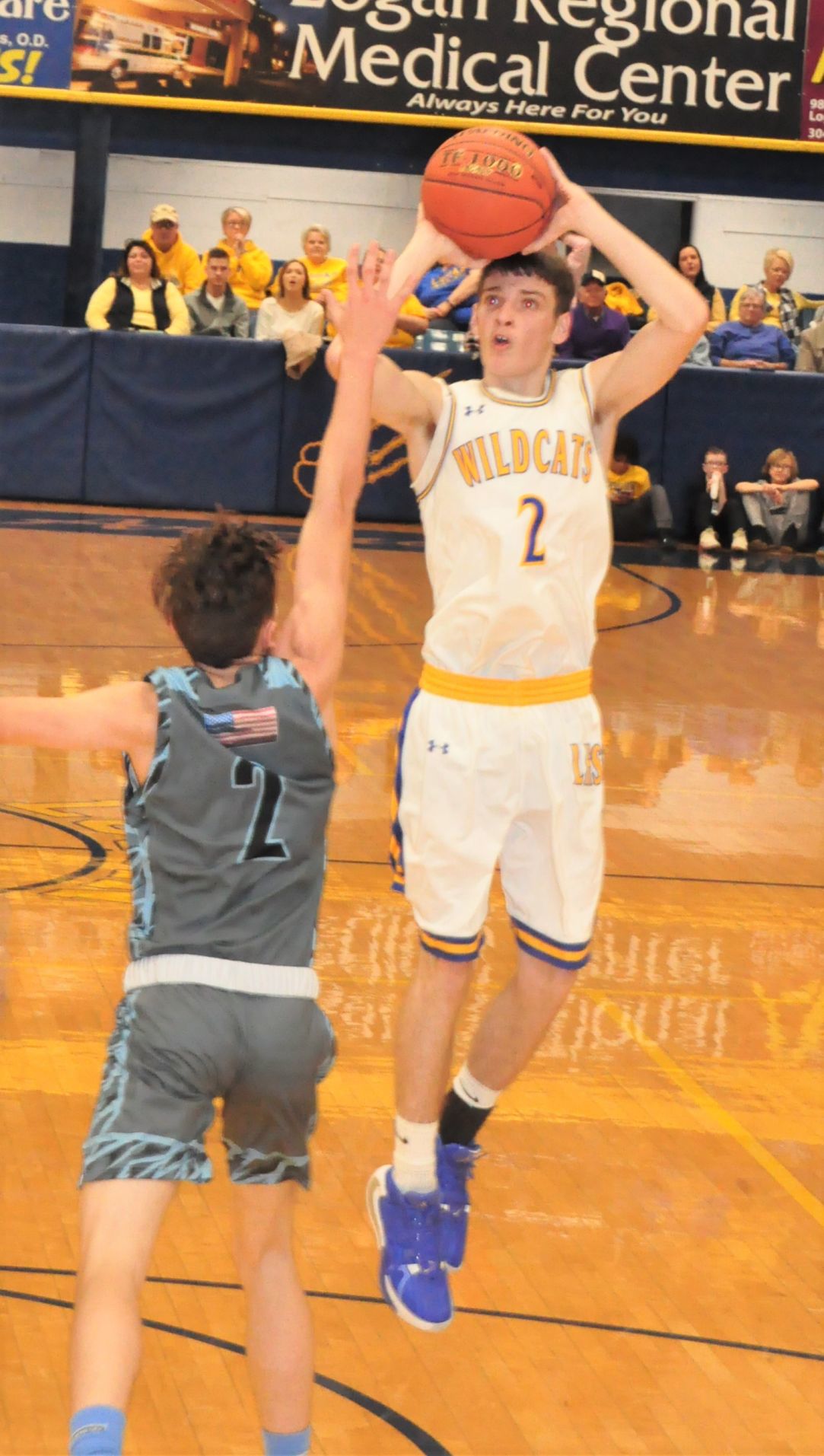 Logan High School’s David Early drives between two Mingo Central defenders in the Wildcats’ 50-48 win over the Miners on Tuesday, Jan. 28, 2020 at Logan.

Paul Adkins/The Logan Banner Logan High School’s Mitchell Hainer (20) goes up for a shot in the paint in the Wildcats’ 50-48 win over the Miners on Tuesday, Jan. 28, 2020 at Logan.

Paul Adkins/The Logan Banner Logan High School’s Mitchell Hainer goes up for a shot in the Wildcats’ 50-48 win over Mingo Central on Tuesday, Jan. 28, 2020 at Logan.

But it was Mingo Central’s Colton Blankenship who nearly stole Early’s thunder and almost stole the show.

Fittingly enough, it was Early who supplied Logan with the eventual game-winning shot as he drove down the lane and scored a bucket with two seconds left, breaking a 48-all tie.

The Miners then quickly in-bounded the ball and passed to Blankenship, who heaved an 80-foot, one-handed shot from inside the free throw line on the other end of the court. Blankenship’s desperation toss was right on line and right on target but bounced off the back of the rim at the buzzer as the crowd buzzed.

“He almost made it. I would have probably lost my coaching job had he made that,” joked Logan coach Zach Green after the game.

Had it went in that wouldn’t have surprised Mingo Central coach Stan Elkins.

“It’s funny because at the end of practice we practice those half court shots,” said Elkins, a former Logan High School assistant coach. “Usually after about 10 of those shots somebody usually makes one of those.”

But it didn’t go in so the night was Logan’s.

Early entered the night needing 14 points to surpass the all-time scoring mark of 1,929 points set by Paul Williamson. He closed out the night with 19 points.

Early got to within one point of Williamson with 5:38 to go as he completed an old fashioned three-point play as Logan led 44-35.

Then later on, Early broke the record, taking a bullet pass from Mitchell Hainer underneath the hoop and then turning and scoring a hoop off the window with 4:49 left as Logan led 44-38.

Williamson was in attendance, standing in the corner behind the rows of season ticket holders.

“It’s a good accomplishment for him,” Williamson told The Logan Banner. “After I saw him play his freshman season I knew that he could break the record. He deserves it more than anybody. I’m proud of him. If I could pick one kid to break it it would be him. I’m also glad to see Logan basketball back to where it should be.”

Green said he was happy for Early in his record-breaking night.

“It was fitting that he breaks the record and makes the game winning shot,” he said. “He’s a kid who really deserves it. He’s put in a lot of hours in the gym and he’s really been consistent in his four years here. He’s been an outstanding scorer and we’ve been happy to have him at Logan High School.”

Early said breaking the record was one of his goals way back in his freshman year when he first donned the blue and gold of Logan.

“It feels good. That’s been something that I’ve wanted to accomplish,” said the soft-spoken Early. “This was one of my goals. Paul was a great player. I got to see him play some when I was a little kid running around.”

It was a big big night indeed for Early. He also verbally committed to Marshall University and will be joining Chapmanville’s Obinna Anochili-Killen next season. Devin Collins of Chapmanville is currently a freshman member of the Thundering Herd.

Logan improved to 9-5 on the season with the win and not 11-3. The Wildcats have just three on-court losses this season. More on that later.

Mingo Central, tied for 10{sup}th{/sup} in this this week’s Class AA poll, dropped to 9-4 overall and 5-4 in the Cardinal Conference. Logan is 7-1 in league play and won its eighth straight game.

The game marked the final league matchup between the two schools as Mingo Central was recently voted out of the Cardinal Conference beginning next season by a 7-2 vote. Logan and Chapmanville voted to keep the Miners in the league.

The Wildcats swept the season series with Mingo Central, also taking a 66-48 win on Jan. 3 atop Miner Mountain.

It was much different this time.

“It was ugly,” Green said. “I think a sign of a good team is a team that can win in ugly games like this. We just didn’t make shots tonight from the floor or from the foul line but we were somehow able to pull this one out. But we also have to tip our hat to them. They played really well. They executed their game plan. It was a good win and we’ll take it and move on to the next one.”

Logan led just 13-10 after the first quarter and 25-20 at halftime in the low-scoring game.

Brothers Devin Hatfield and Drew Hatfield led Mingo Central with 19 and 14 points respectively. The two played for Logan last season before transferring back to MCHS. Jacob May had seven, Jarius Jackson six and Blankenship two.

The Miners led 35-33 after three quarters but the Cats were able to outscore MCHS 17-13 in the fourth quarter.

A Garrett Wiliamson bucket then put Logan up for good, 37-35.

Early then hit a pair of free throws, completed a three-point play and then scored his record-breaking bucket to make it a 44-38 ballgame.

The Miners rallied, pulling to within 46-43 with 2:21 left with a Drew Hatfield drive down the lane. He later tied it a 48 with 17 ticks to go after drilling a 3-pointer.

Early then won it with his drive in the lane with two seconds left.

“Our assistant coaches did a great job of scouting,” Elkins said. “We had a good game plan and we felt we were prepared. One of our subs had a concussion in our game at Westside so we were kind of short-handed. He had a sprained ankle as he stepped on a photographer’s foot on the base line. But we came out and played hard and I’m very proud of them. We hate to lose but we felt like we did a lot of good things.”

Now with 1,935 points, Early is just 57 points away from breaking Shayna Gore’s all-time Logan High School scoring record of 1,991 points. Gore, who later went on to play at Marshall University and is currently the girls’ basketball coach at St. Albans High School, led the Logan girls to the 2013 Class AAA state championship game her sophomore season.

ON TAP: Logan is scheduled to return to action with this weekend’s King Coal Classic at home. The Wildcats take on Wesley Christian, Kentucky, on Friday at 7:30 p.m. Then on Saturday night, Logan hosts Parkersburg Catholic in the late game.

“We have two really good tests,” Green said. “We’ve went from the hunter to the hunted and we’ve got to keep that mentality. We just really didn’t have it tonight, so that’s something that we are going to address in the next few days at practice.”

Mingo Central returns to the hardwood on Friday night at Nitro in a 7 p.m. tip. The Miners then host county rival Tug Valley on Feb. 4. Mingo Central won at Tug Valley, 61-57, on Jan. 21.

LOGAN FORFEITS GAMES: Logan’s David Early had to sit out the first two games of the season as he was completing the minimum 14 practices required by the WVSSAC.

Early began the 2019-20 season at Beckley Prep but transferred back home to Logan and was ruled eligible by the WVSSAC.

Logan split its first two games, falling at Herbert Hoover (55-48) and winning at Scott (82-66) but were feeling good heading to the Great Smoky Mountains and a Christmastime tournament knowing Early would be eligible.

But it turns out he wasn’t.

He only had logged 13 practices and therefore was technically ineligible.

Logan has now forfeited both the Muscle Shoals and Pikeville games, making them 0-3 in the tournament. The games will go into the books officially as 2-0 losses.

With those losses, Logan started out the season with a 1-4 mark. Logan has gone 8-1 since, including at win over two-time defending Class AA state champion Chapmanville.

“We only had 13 practices in for Early and we didn’t realize that until we got back,” Green said.

HONORING KOBE: There was a moment of silence before Tuesday night’s game to honor LA Lakers great Kobe Bryant, who was tragically killed along with eight other people in a helicopter crash last weekend in California.

One of the victims was Bryant’s 13-year-old daughter Gianna.

Two Logan High School students honored Bryant by wearing gold LA Lakers jerseys, one wearing No. 8 and the other No. 24.

Four of the section’s six teams are ranked this week. Chapmanville is second in the state, while Logan is third and Scott and Mingo Central are tied for 10{sup}th{/sup}.

“A lot of teams are playing well and are making some noise and tonight we showed that,” Elkins said.