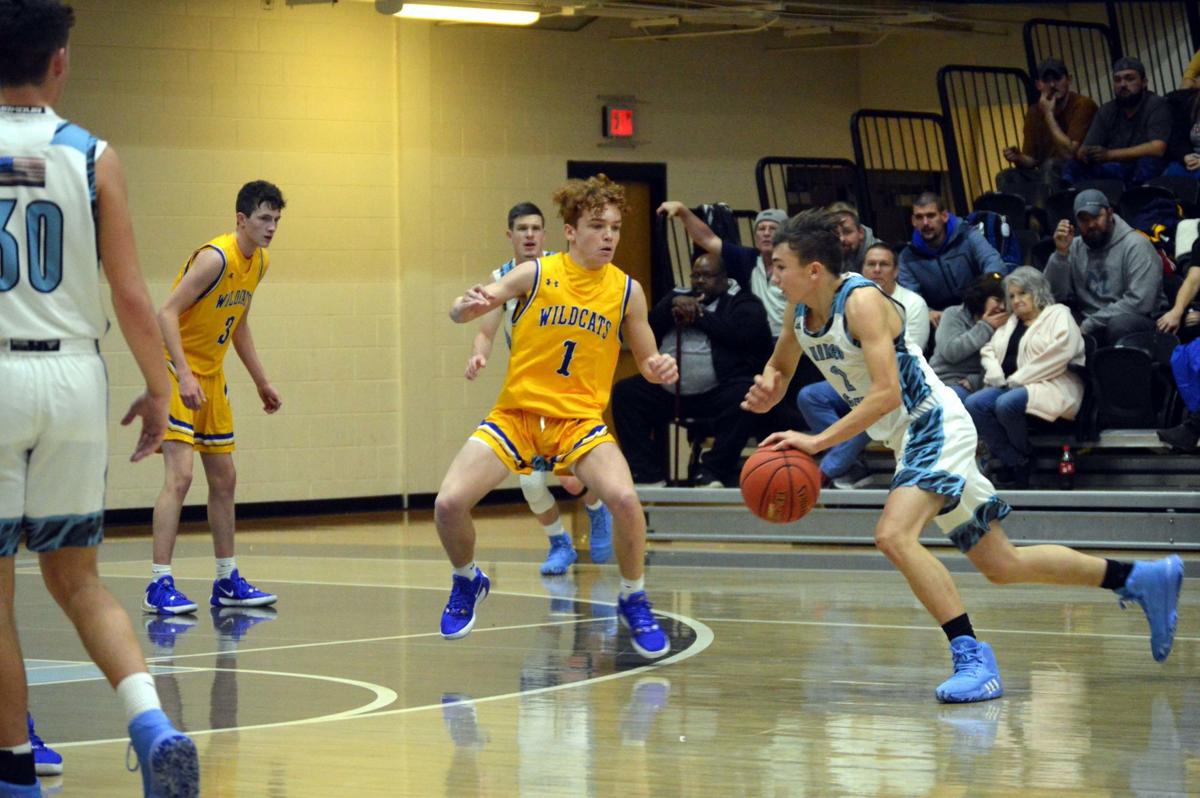 Mingo Central’s Colton Blankenship blows by Logan’s Trey Brown during the Miners 64-48 loss to the Wildcats on Friday inside the MCHS Gymnasium. 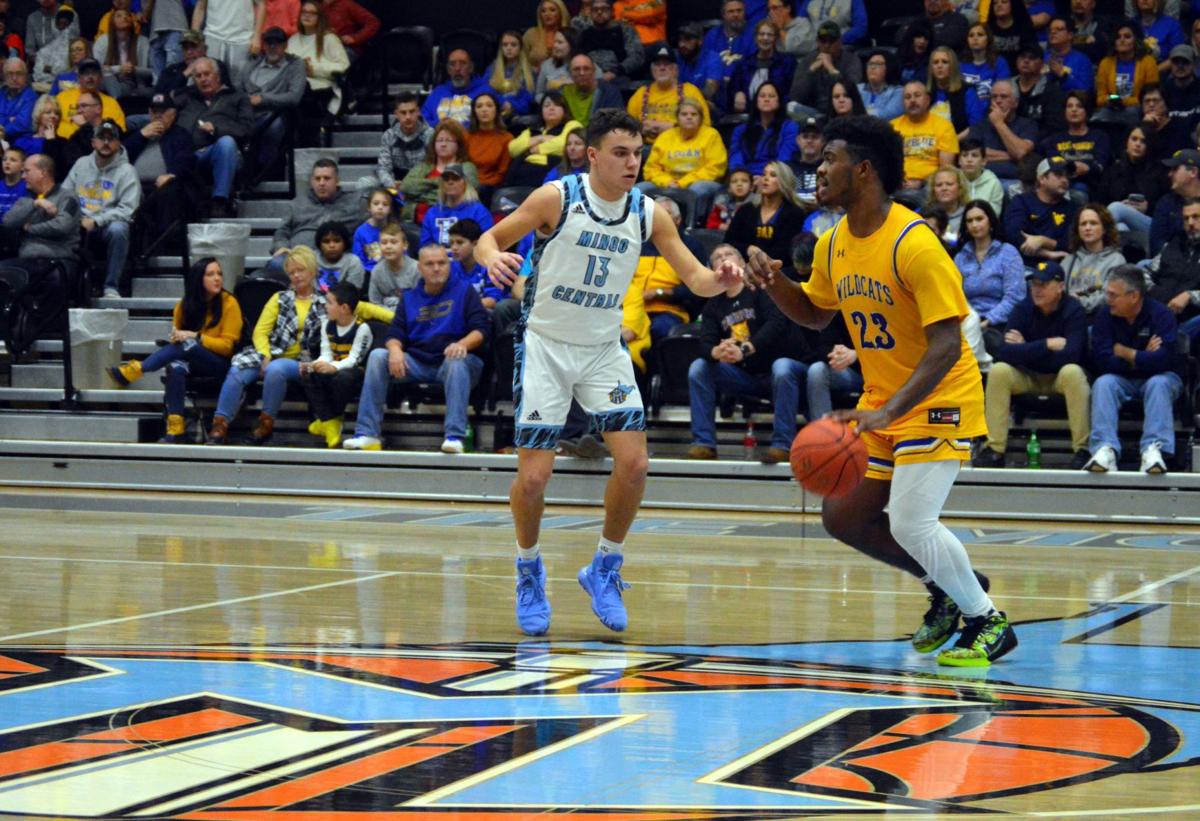 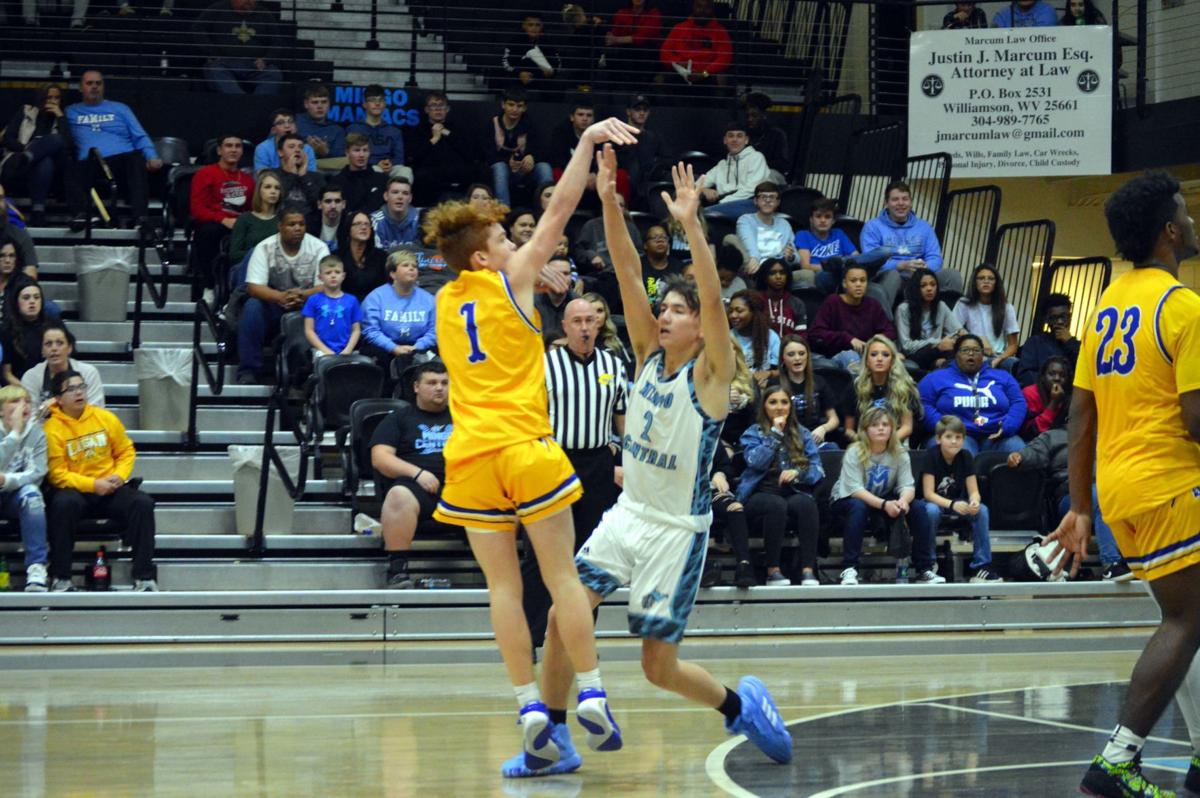 Logan guard Trey Brown fires up a 3-pointer over Mingo Central’s Colton Blankenship during the Wildcats’ 64-48 win over the Miners on Friday at the Mingo Central High School gymnasium.

Mingo Central’s Colton Blankenship blows by Logan’s Trey Brown during the Miners 64-48 loss to the Wildcats on Friday inside the MCHS Gymnasium.

Logan guard Trey Brown fires up a 3-pointer over Mingo Central’s Colton Blankenship during the Wildcats’ 64-48 win over the Miners on Friday at the Mingo Central High School gymnasium.

Early scored a game high 27 points for Logan, including 19 in the first half, as the Wildcats were able to ride his strong start and built a 13-point halftime lead after a nip-and-tuck first quarter.

In the first eight minutes of play, Early and All-State guard Drew Hatfield for Mingo Central were going back-and-forth as the pair each drilled multiple long balls in the period. Early led No. 3-ranked Logan with 10 in the frame while Hatfield scored nine, coming on a trio of 3-pointers, and Logan led by five at 19-14 after one.

In the second stanza, the Wildcats (6-3) turned it up defensively as they clamped down on that end and held Mingo Central to only eight points in the period as they built the 35-22 halftime lead.

“I thought we defended really well tonight, we did a really good job staying down on those guys,” Logan coach Zach Green said following the win. “Minus the first three minutes of the game when they hit a couple of 3s, I thought we did a good job all night long of staying down on them and really defending. I was happy overall with our effort defensively.”

Coming out of the halftime locker rooms, it was the Miners (3-2) who gained some momentum as Logan went frigid from the floor and only scored seven points in the third period.

The Miners were able to cut the lead from 13 down to seven going into the fourth quarter as Hatfield connected on a three before the end of the period to bring the score to 42-35.

In the fourth, the Wildcats would not let Mingo Central claw their way any closer however as seven points was the closest they would get, and Logan pulled away for the 16-point win.

“I thought our kids played hard, but we still have some hurdles to overcome as a team,” Mingo Central coach Stan Elkins said after the win. “We can’t continue to let guys drive middle all game, somebody’s got to step up and take a charge. And they got how many second chance points? We can’t allow that to happen...but you can’t take anything away from Logan, they are a top team in Class AA. They’ve beat GW and hung right with Woodrow Wilson, they are a basketball school.”

Early’s 27 points led both teams as he connected on two 3-pointers on the night and 9 of 12 from the foul line. He also dominated the glass and unofficially recorded a double-double with 23 rebounds.

No other Wildcats landed in double-figures but eight other players landed in the scoring column. Cameron Hensley finished with eight points, all in the fourth quarter, while Jarron Glick finished with six.

Carson Kirk and Trey Brown each finished with five points while Aiden Slack and Mitchell Hainer each scored four, Noah Cook scored three, and Garrett Williamson finished with a bucket.

For Mingo Central, Drew Hatfield led the scoring as he tossed in a team high 22 points, including four 3-pointers. He also finished 4 of 5 shooting from the foul line. Younger brother Devin Hatfield scored 10 points for the Miners as they combined for 32 of the teams 48 points.

After the game, coach Green talked about the turnaround so far this season for the Miners, as they currently sit with a 3-2 record after only winning three games all season a year ago, and the difficulties they present to the opposition.

“They are a scary team because they have a bunch of guards that can really play and can really shoot the ball,” Green said. “They present a lot of challenges with them being able to stretch the floor. We got a chance to watch some game film and see what they were doing and did our best to defend them. I thought our guys really stepped up and executed what we wanted tonight.”

The win for Logan improves them to 7-5 all-time against Mingo Central as they have now won four straight games in the contest, dating back to the 2017-18 season.

The Wildcats improved to 5-3 on the season with the win and then improved to 6-3 following a 78-51 thrashing at rival Man on Saturday. They were back in action this week as they traveled to Wayne on Tuesday night before taking a week off to prepare for their home opener on Jan. 14 against rival Chapmanville.

The loss dropped Mingo Central to 3-2 as they have now lost two straight games, both to teams ranked in the preseason AP top five. Things did not get any easier for the Miners as they were scheduled to travel to No. 1 Chapmanville on Tuesday night, but scores and stats were not available by press time.

The Miners take the court again this weekend in the 18th-annual Hatfield and McCoy Shootout at the Williamson Fieldhouse as they are set to tussle with Kentucky foes Phelps and Belfry. They are set to play Phelps on Friday night at 8 p.m. and then the Pirates on Saturday in a 9 p.m. tip.