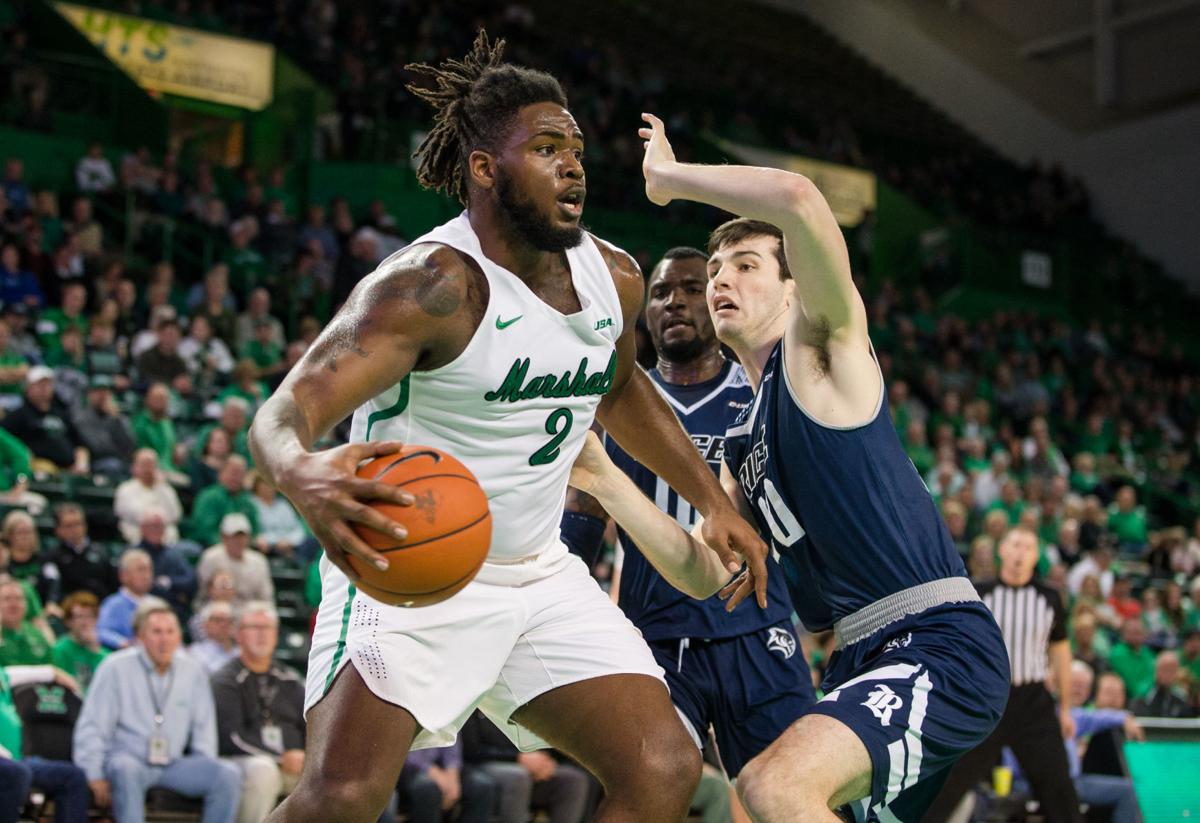 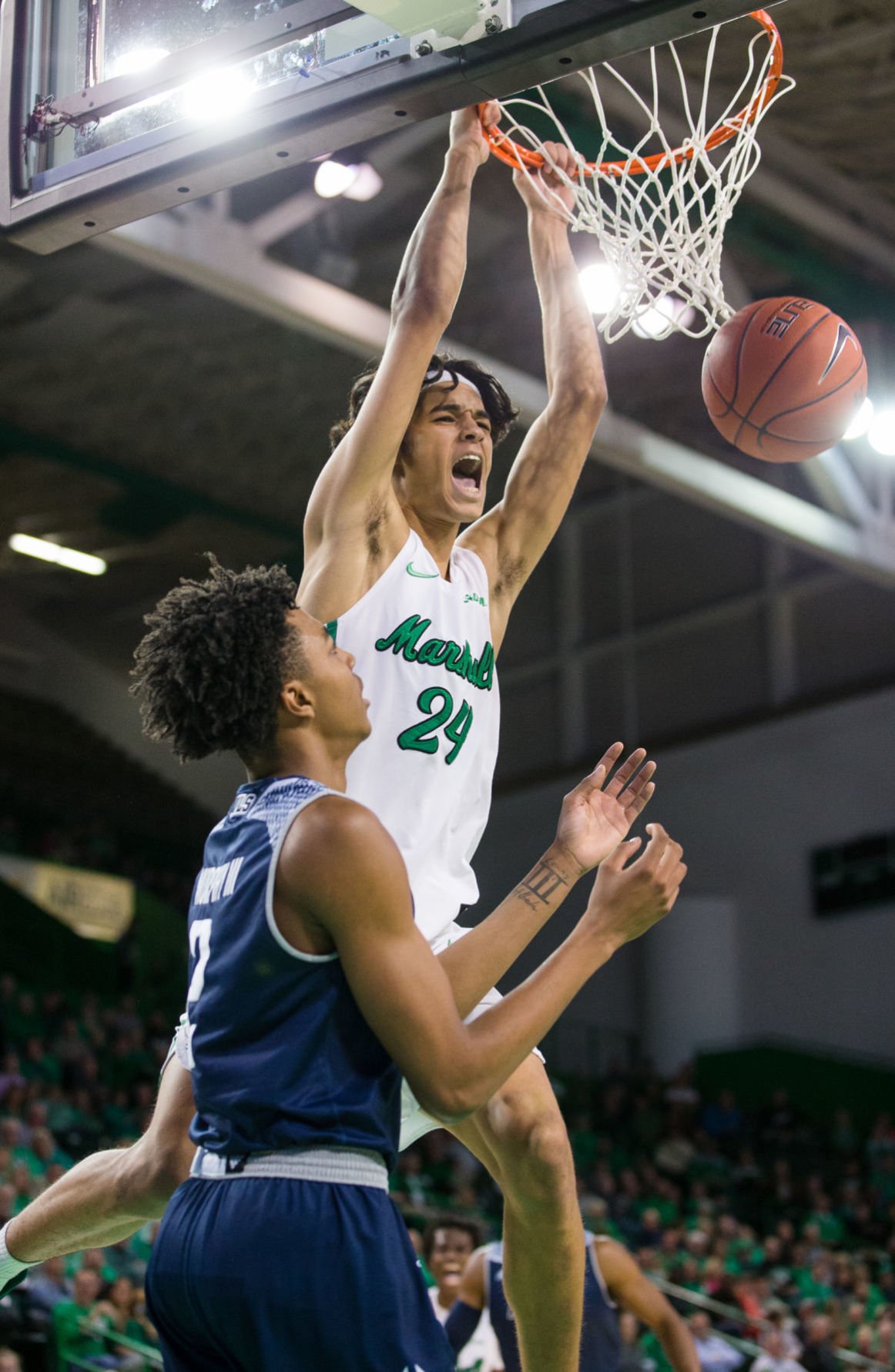 Marshall's Cam Brooks-Harris (24) throws down a dunk over Rice's Trey Murphy (2) during an NCAA college basketball game on Thursday, Jan. 2, 2020, at the Cam Henderson Center in Huntington, W.Va.

Marshall's Cam Brooks-Harris (24) throws down a dunk over Rice's Trey Murphy (2) during an NCAA college basketball game on Thursday, Jan. 2, 2020, at the Cam Henderson Center in Huntington, W.Va.

HUNTINGTON — Marshall got exactly what it was looking for to start the year 2020 and Conference USA men’s basketball action for the season.

The Thundering Herd put together another complete performance, shooting 58 percent, forcing Rice into bad shots and winning the battle on the glass in convincing fashion during an 89-69 win in front of 5,311 fans at Cam Henderson Center on Thursday night.

It was Marshall’s fifth win in six games as the team evened its record at 7-7 on the season and 1-0 in C-USA.

“We’ve been finishing games,” Marshall head coach Dan D’Antoni said. “We struggled with that early, but we seem to be able to find now a way to finish them. A lot of that is our stops, but also our offense.”

For the second consecutive game, Marshall was able to limit the outside shooting of a team that thrives on it. Rice finished just 6 of 21 from 3-point range with many shots being forced in the second half as the Owls struggled to a 2-of-10 performance from the arc.

The Herd defense had much to do with that, communicating well on the back end and helping on dribble penetration to deny or alter opportunities at the rim.

Marshall finished the game with 10 blocks, which disrupted the Owls’ offense from establishing a rhythm.

“They have athleticism at the rim, which makes it hard to score,” Rice coach Scott Pera said. “We missed seven layups at halftime, but how many did they cause us to miss? Five of them, maybe. That’s a credit to them.”

Marshall got consistent production throughout the game on both ends — a continuation of recent success for the team.

Seven Marshall players had at least three field goals — led by Taevion Kinsey’s 19 points and eight assists — and all 12 players who saw the floor scored.

Jarrod West also had 15 points, five assists and five rebounds while proving to be the catalyst out front to disrupt the flow of Rice’s offense.

“When we do scout, … this guy right here (West) takes it personal,” Kinsey said. “In scout, it shouldn’t be any talking. Sometimes, we clown around, but he makes sure everything is full go — ‘We need to make sure we’re on our stuff.’ I think that really helps us a lot.”

While Marshall had seen success coming in, D’Antoni decided to shake up his lineup on Thursday, starting Darius George at the 4 spot following his career-high production against Duquesne.

D’Antoni said following the game that it was a reward for George elevating his play, but the move seemed to work well as the position flourished without any lulls in play.

As the game wore on, Marshall got stronger on both ends of the court, using its depth and consistent play to stretch its lead. The Herd took a 44-35 lead into the locker room after a strong defensive half that allowed Rice just three assists on nine made field goals.

The Owls had trouble generating offense, but stayed around early, thanks in part to 18 free throw attempts in the first half.

In the second half, Marshall made the defensive adjustment, maintaining its aggressiveness while limiting its foul output, which produced a pair of big runs that put the game away.

Kinsey had a two-handed flush while being fouled for a 3-point play that started a surge as Marshall used a 13-4 run to build an 18-point lead.

The lead ballooned to as many as 25 points when Jannson Williams hit Mikel Beyers on a cut for a layup to push it to 81-56.

Drew Peterson led Rice with 18 points, 14 in the first half. Peterson had just two shot attempts in the second half as Marshall took away one of the Owls’ main scoring threats. Robert Martin had 12 off the bench for Rice (8-6, 0-1 C-USA) while Trey Murphy added 11.

Marshall returns to action at 2 p.m. on Saturday when the Herd hosts North Texas, which dropped its C-USA opener at Western Kentucky, 93-84.

Marshall takes on Rice during an NCAA college basketball game on Thursday, Jan. 2, 2020, at the Cam Henderson Center in Huntington, W.Va.