The Herd’s Savannah Wheeler (4), right, pushes up the floor as the Marshall University women’s basketball team takes on Louisiana Tech on Saturday at the Cam Henderson Center in Huntington. 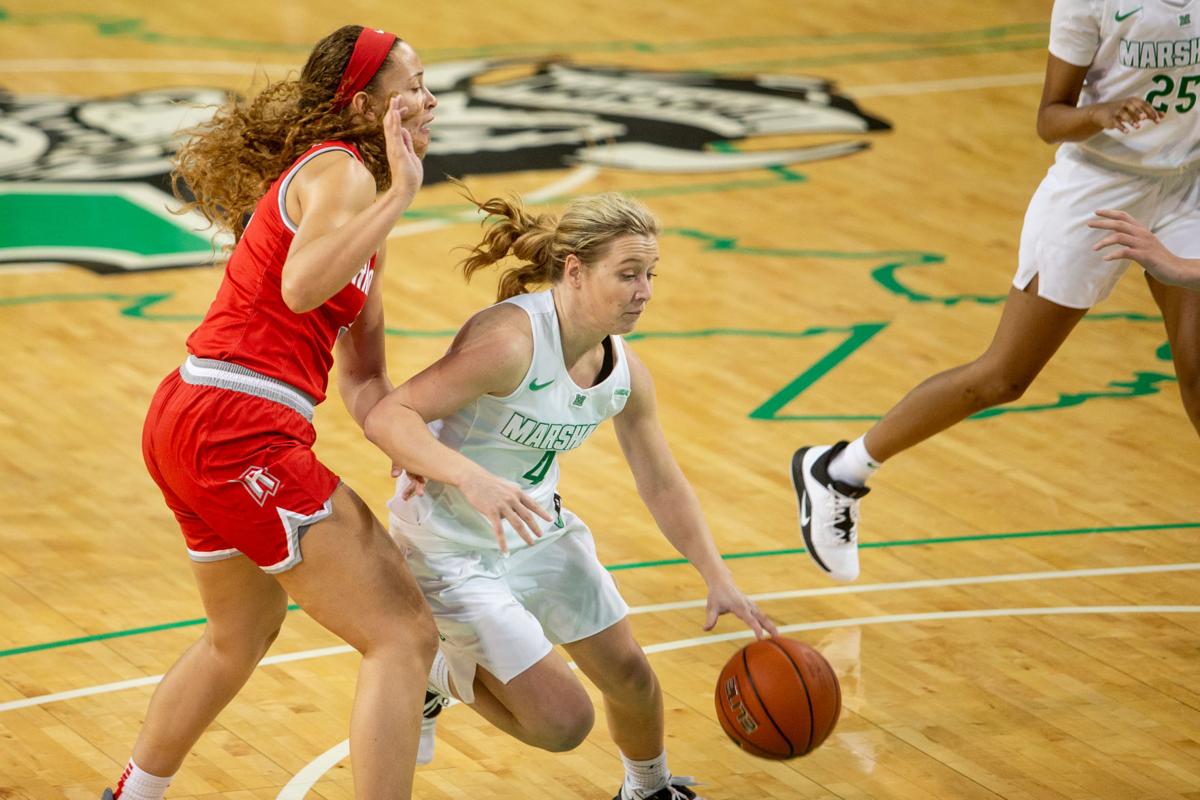 Marshall’s Savannah Wheeler (4) drives across the court as the Marshall University women’s basketball team takes on Radford University on Sunday in Huntington.

The Herd’s Savannah Wheeler (4), right, pushes up the floor as the Marshall University women’s basketball team takes on Louisiana Tech on Saturday at the Cam Henderson Center in Huntington.

Marshall’s Savannah Wheeler (4) drives across the court as the Marshall University women’s basketball team takes on Radford University on Sunday in Huntington.

CHARLOTTE, N.C. — The first road contest for Marshall’s women’s basketball team in Conference USA play proved just how tough the road can be within the league.

Charlotte used a big run in the third quarter to run away with a 75-54 win over Marshall at Halton Arena in Charlotte on Friday night.

Savannah Wheeler was the lone player in double figures for Marshall (2-3, 1-2 C-USA) with 16 points.

Shooting woes plagued Marshall throughout the game, but it was a third-quarter drought that especially led to the Herd’s demise on Friday night in Charlotte.

Marshall trailed just 30-29 following a 3-pointer from Alexis Johnson early in the period, but it would be the last field goal for the Herd over the next seven minutes.

As the Herd offense went dormant, Charlotte’s Octavia Jett-Wilson got going, scoring nine of her game-high 19 points in the third quarter with many coming during a 19-3 run that put the game out of reach for the 49ers.

In addition to the shooting woes, the already-depleted Marshall roster got into foul trouble in the post during the run.

Forward Kennedi Colclough picked up her fourth foul with 4:47 left in the third quarter, which put an already-thin Marshall team even thinner in its player rotation during the run in which the 49ers turned a 30-29 contest into a sizable affair.

Shooting woes plagued Marshall throughout the game as the Herd went 7:10 without a field goal during the run. Marshall shot just 33 percent from the floor in the loss.

In addition to Jett-Wilson’s production, Charlotte (2-4, 1-0 C-USA) got 17 points and eight rebounds from Molina Williams, along with 15 from Mariah Linney.

Alexis Johnson finished with nine points and nine rebounds in the loss for Marshall.

CHARLOTTE 65, MARSHALL 56: The Charlotte women’s basketball team overcame a 15-point second-quarter deficit and took down visiting Marshall 65-56 in overtime Saturday afternoon in Halton Arena in the second game of the two-game series between the two teams.

Saturday’s result is the Thundering Herd’s second tough overtime loss in as many weekends. Marshall dropped a 61-51 decision at home to Louisiana Tech last Friday.

The 49ers received a career-high 26 points from Jada McMillian on 10-for-17 shooting and Ocatvia Jett-Wilson added 17, while struggling to a 5-for-19 effort from the floor. Dara Pearson also registered a double-double with 11 points and 14 rebounds. Molina Williams also added a career-high 11 rebounds off the bench, in extended minutes. Charlotte played without the services of 6’3” Jazmin Harris, who suffered an injury in Friday’s first half.

Both teams struggled to find the range from deep Saturday. Marshall made four of its 22 shots (18.2 percent) to Charlotte’s 14.3 percent (3-for-21). However, the host 49ers (28) more than doubled the visitors’ 13 trips to the free throw line and converted 22 times.

The Thundering Herd, who had just eight available players, were down to the minimum of five after Mays, Paige Shy and Mahogany Matthews all fouled out in overtime.

Marshall, who led the contest for 35 minutes and three seconds, built a 15-point lead twice in the second quarter. The last time came when Colclough hit a jumper at the 6:52 mark to put the Herd ahead 26-11.

The fourth quarter was where Charlotte really made its move, outscoring the visitors 15-8. Once Jett-Wilson broke a 44-all tie with a free throw at the 3:06 mark, the lead seesawed back and forth until McMillian went 1-for-2 at the free throw line with 10 seconds left.

Marshall's Taylor Pearson had a chance to win the game in regulation, but had her layup attempt was blocked by Jett-Wilson. Jett-Wilson then had a shot to win it herself, but missed a layup as well and Marshall’s Mays rebounded to send the game to the extra session.

Jett-Wilson then scored the 49ers’ first seven points in overtime and Marshall never got within one possession down the stretch.

The Thundering Herd will be back in action next weekend when it hosts WKU on Thursday at 6 p.m. inside the Cam Henderson Center at 6 p.m. Marshall will then travel to Bowling Green to take on the Lady Tops Sunday at 3 p.m.