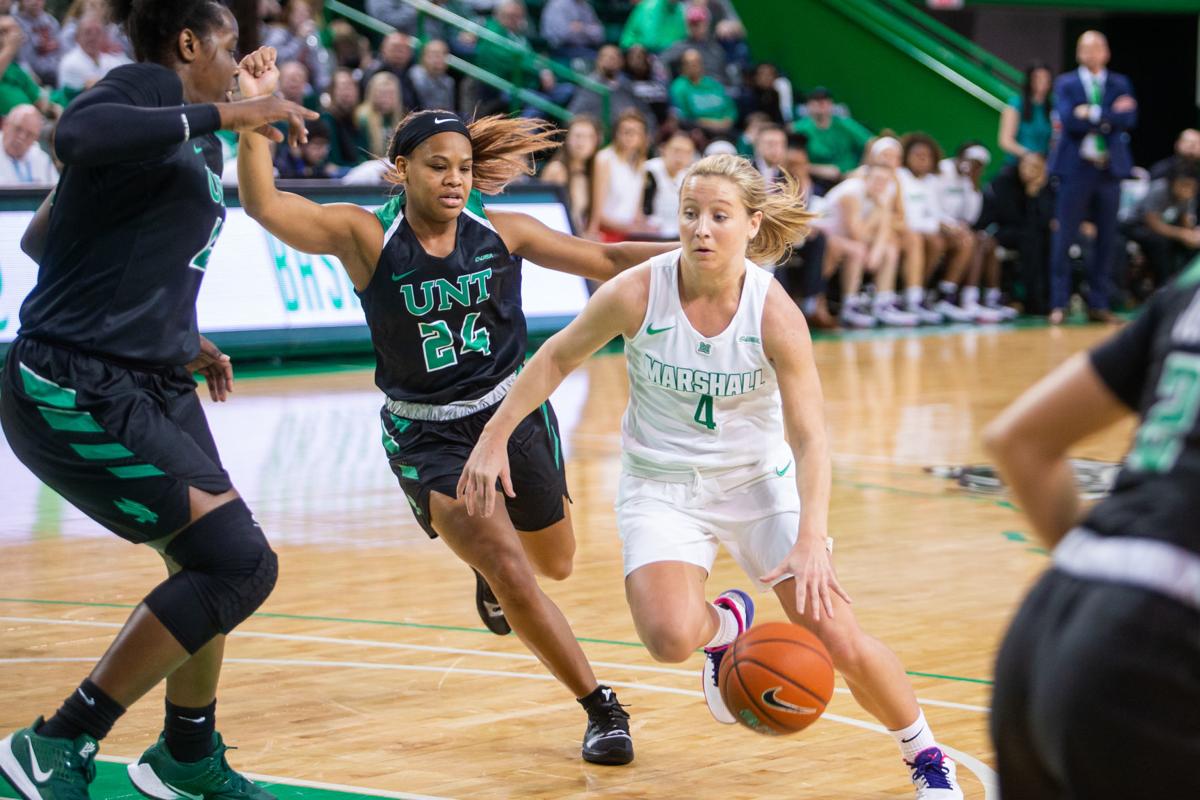 FRISCO, Texas — Marshall’s women’s basketball team wasted no time getting the 2020 Conference USA Tournament off to an exciting start Wednesday.

The Thundering Herd rallied from an 11-point fourth-quarter deficit to force overtime before freshman Savannah Wheeler came up with clutch free throws down the stretch to give Marshall a 71-67 overtime win over Southern Miss in the first round of the Conference USA Women’s Basketball Tournament at the Ford Center at The Star in Frisco, Texas.

“That was a heck of a win,” Marshall head coach Tony Kemper said. “I think that we were as tough as we’ve been all year.”

Part of that toughness showed itself in point guard Wheeler, who came up with four clutch free throws in the final 20 seconds to push the lead to two possessions and keep the Golden Eagles at bay.

In her first-ever Conference USA Tournament game, Marshall’s freshman leader scored 19 points while adding four steals to lead the team to its first win in the C-USA Tournament since 2016.

Wheeler credited the play of backcourt mate Kristen Mayo, who finished with a career-high 22 points, as one major reason why she was able to settle into her first collegiate postseason experience well.

“It helps a lot,” Wheeler said. “We can always count on her to make shots.”

Marshall (13-17) never trailed in the overtime session, using a 3-pointer from Khadaijia Brooks to take an advantage that it would not relinquish.

That advantage came after a furious rally for the Herd that included a lineup adjustment by Kemper, which turned the game in the Herd’s favor.

Southern Miss used its post presence with Kelsey Jones and Respect Leaphart to build a double-digit lead. The Golden Eagles led 55-44 following a Leaphart layup with 7:50 left, but the smaller lineup that Kemper inserted started to pay dividends down the stretch.

Marshall started to crash down with its guards to swarm Jones underneath. That led to seven Southern Miss turnovers over a five-minute stretch that allowed the Herd to rally.

The Herd took full advantage, with Taylor Pearson nailing consecutive 3-pointers before Princess Clemons hit a 3-pointer and produced a steal that led to a pair of Mayo free throws that knotted the game at 55 and set up the back-and-forth ending.

Pearson finished with 10 points — all in the fourth-quarter rally.

Southern Miss coach Joye Lee-McNelis said Kemper’s lineup switch and the Golden Eagles’ inability to adjust on both ends was the difference in the game.

“They did a great job,” Lee-McNelis said. “Kelsey got lost several times. She’s supposed to mirror those handoffs and ball screens. She got really frustrated. Hats off to them. We felt like Kelsey could guard those situations, and we felt like the mismatch going the other way was a greater advantage for us. Unfortunately, it wasn’t.”

Southern Miss (15-15) finished with 26 turnovers that led to 31 Marshall points.

That statistic helped the Herd overcome a 42-23 rebounding deficit in the game.

“I don’t think anyone has ever sat up here and won the game and (lost) 42-23 on the glass,” Kemper said. “I don’t think there’s any way that’s ever happened.”

The way that happened is Marshall turning things around in the overtime session. Marshall grabbed all five rebounds in the extra period, keeping Southern Miss without a rebound for the entire five minutes.

Marshall had to rally from the double-digit deficit due to the Golden Eagles’ strong start to the second half.

Southern Miss trailed by one at the break, but used an 18-5 run to open its biggest lead at 47-35 before a Mayo 3-pointer ended a near five-minute drought.

“We did not come out of the locker room with a lot of fire,” Kemper said. “I thought they beat us to almost every ball in that stretch at the beginning of the third quarter.”

Marshall jumped out to an early advantage, based largely on the play on Mayo, who had 11 first-half points. A 3-pointer by Brooks with seconds left gave the Herd a 30-29 advantage at the break.