Sign Up
Log In
Purchase a Subscription
You are the owner of this article.
Edit Article Add New Article
You have permission to edit this article.
Edit
Welcome, Guest
Home
News
Sports
Features
Photos
Opinion
Obituaries
e-Edition
Classifieds
Legals
HD Media
No Thanks
1 of 2 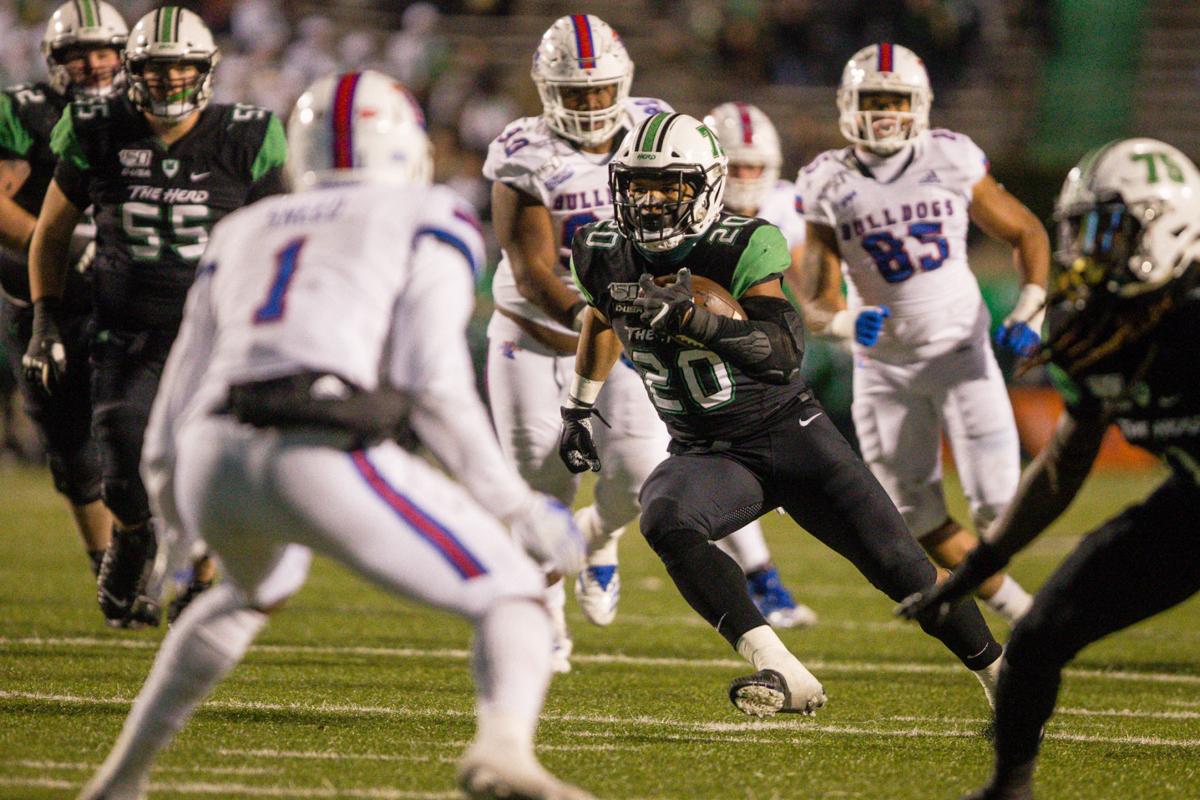 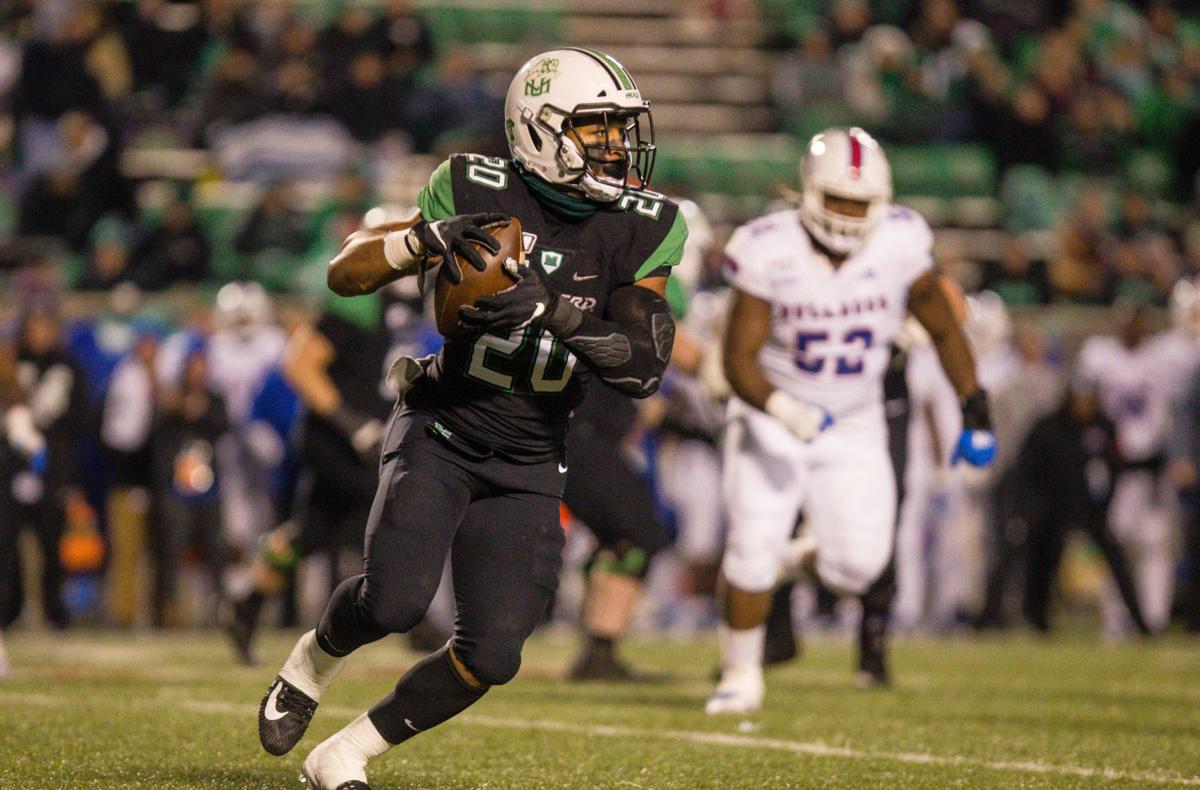 Sholten Singer/The Herald-Dispatch Marshall running back Brenden Knox (20) rushes upfield on a carry as the Herd takes on Louisiana Tech during a C-USA football game on Friday, Nov. 15, 2019, at Joan C. Edwards Stadium in Huntington, W.Va.

Sholten Singer/The Herald-Dispatch Marshall running back Brenden Knox (20) rushes upfield on a carry as the Herd takes on Louisiana Tech during a C-USA football game on Friday, Nov. 15, 2019, at Joan C. Edwards Stadium in Huntington, W.Va.

HUNTINGTON — Marshall’s football program is in the midst of one of its top seasons in school history.

No. 16 ranking in the Associated Press Poll just over midway through its 2020 regular season slate.

Undefeated record, which makes it the lone Conference USA team to boast of such credentials.

Yes, Saturday’s game against Middle Tennessee at noon at Joan C. Edwards Stadium has plenty of importance riding on it.

Just not for any of those reasons, as Marshall quarterback Grant Wells was quick to point out.

“We know that this game isn’t about us anymore,” said the Charleston native who grew up an hour from the crash site. “As much as we want to keep our undefeated season, it’s not about us. All that goes out the window when we hit this week.”

In typical game weeks, Marshall head coach Doc Holliday would say the only numbers that matter on a college football Saturday are one and zero. You want to be 1-0 at the end of the week.

This week? It’s just different. The only number that matters for Holliday and his Herd is ‘75’, as is the case every year around this time.

“As we all know, this is the biggest game on our schedule every year,” Holliday said. “Our kids understand the importance of it — how important it is to our fan base, our community and our school.”

On Saturday morning, a 9 a.m. ceremony at the Memorial Student Center fountain will commemorate 50 years since the tragedy that took the lives of 75 people — 37 of which were members of the football team.

In addition to those football players, there were community members, politicians, doctors, lawyers and distinguished citizens, making the tragedy one that linked Marshall forever to its hometown in Huntington.

With Marshall’s program so intertwined with its community, players realize that each week is for those lost, but especially when game week surrounds the Nov. 14 date of that tragedy.

As fate would have it, the Herd gets to play on that date in the 50th year since the crash, which heightens the emotion for players that much more.

“The ‘75’ game always means more to us as players, but I think this one, in particular, is very significant because it’s the 50-year anniversary of the plane crash and we get an opportunity to go out and honor that team by playing a conference game at home,” Marshall offensive lineman Will Ulmer said.

All week, players spoke of the odd happenings that occur during ‘75’ games — aspects that show those players are still out there with the team.

It has almost become expected.

Last season, Marshall played Louisiana Tech, and the Bulldogs had two key players not make the trip to Huntington — an unexpected last-second twist. Then, the Bulldogs fumbled away a punt snap at their own 1-yard line, which led to a gift touchdown in the third quarter that extended Marshall’s slim lead, which ended in a 31-10 win.

On Saturday, Marshall takes on a Middle Tennessee team that poses plenty of difficulties.

The Blue Raiders defeated Marshall in each of the last two seasons and feature a quarterback in Asher O’Hara, who is among the leaders for FBS quarterbacks in rushing yards (476).

O’Hara has accounted for 17 of Middle Tennessee’s 21 offensive touchdowns on the season.

“Every year that I’ve been associated with playing Middle, they just get such good play out of their quarterback,” Marshall defensive coordinator Brad Lambert said. “.”

Defensively, the Blue Raiders bring chaos from all angles to disrupt the opposition.

It leads to mistakes that Middle Tennessee likes to take advantage of, but when a team stays sound in its attack, it can also lead to big plays.

“There’s a whole lot of stuff going on on that side of the ball,” Marshall offensive coordinator Tim Cramsey said. “With everything they have going, they have some issues getting lined up sometimes.”

Sound football is what has led Marshall to wins in each of its first six games and a national ranking that is as high as the Herd has seen in the last 18 years.

Ulmer said coming into 2020, the team knew that it was a special year, given that it was the 50th anniversary season since that tragedy.

The team wanted to do something special and has kept that focus each week.

“From the beginning of this season, we’ve sort of had our chip on our shoulder, knowing this is the 50th year anniversary of the plane crash,” Ulmer said. “It hadn’t been talked about prior to this week, but it’s always sort of stuck out in the back of my mind as the season’s gone on. I think it has with a lot of other players.”

Holliday said that each year, the goal is to honor the 1970 crash victims in the best way possible with the ‘75’ game.

For Holliday, there only one way to get that accomplished.

“It’s a game that you have to find a way to win,” Holliday said.