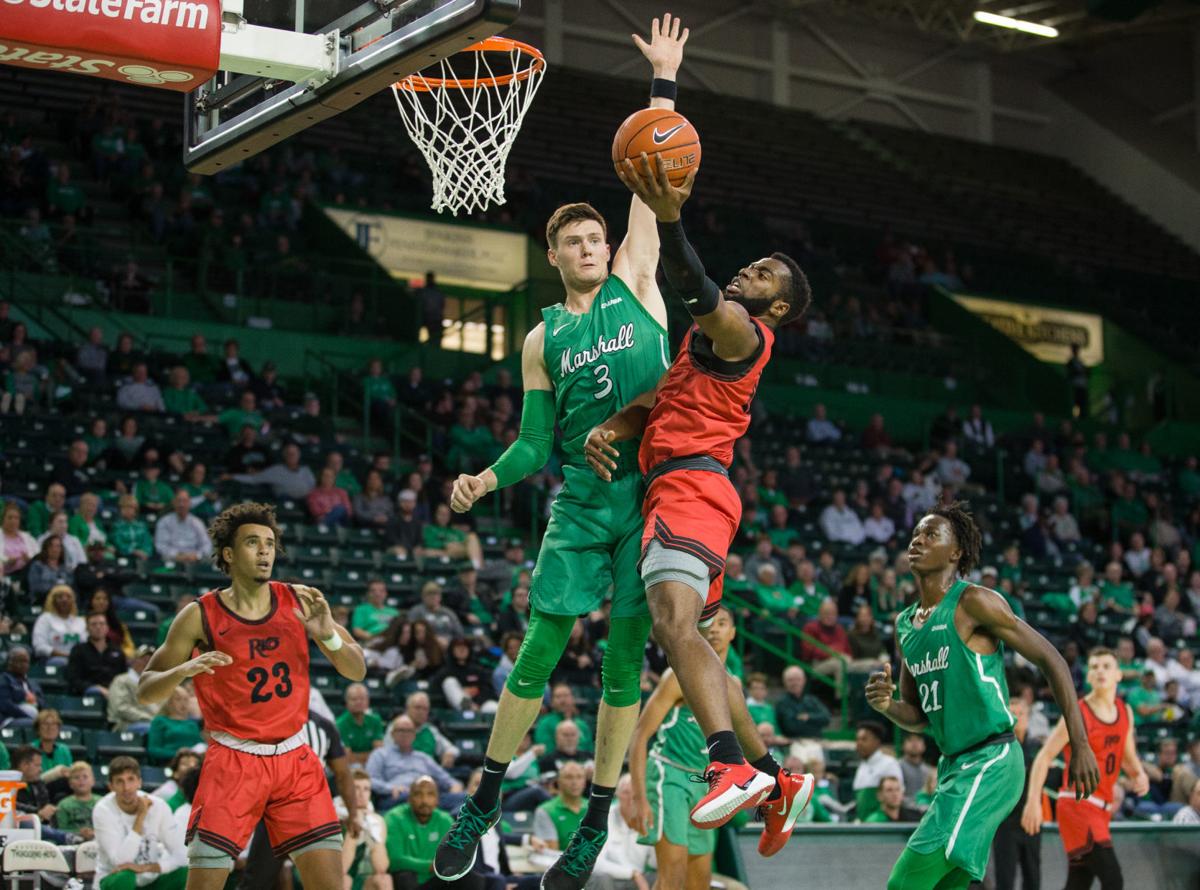 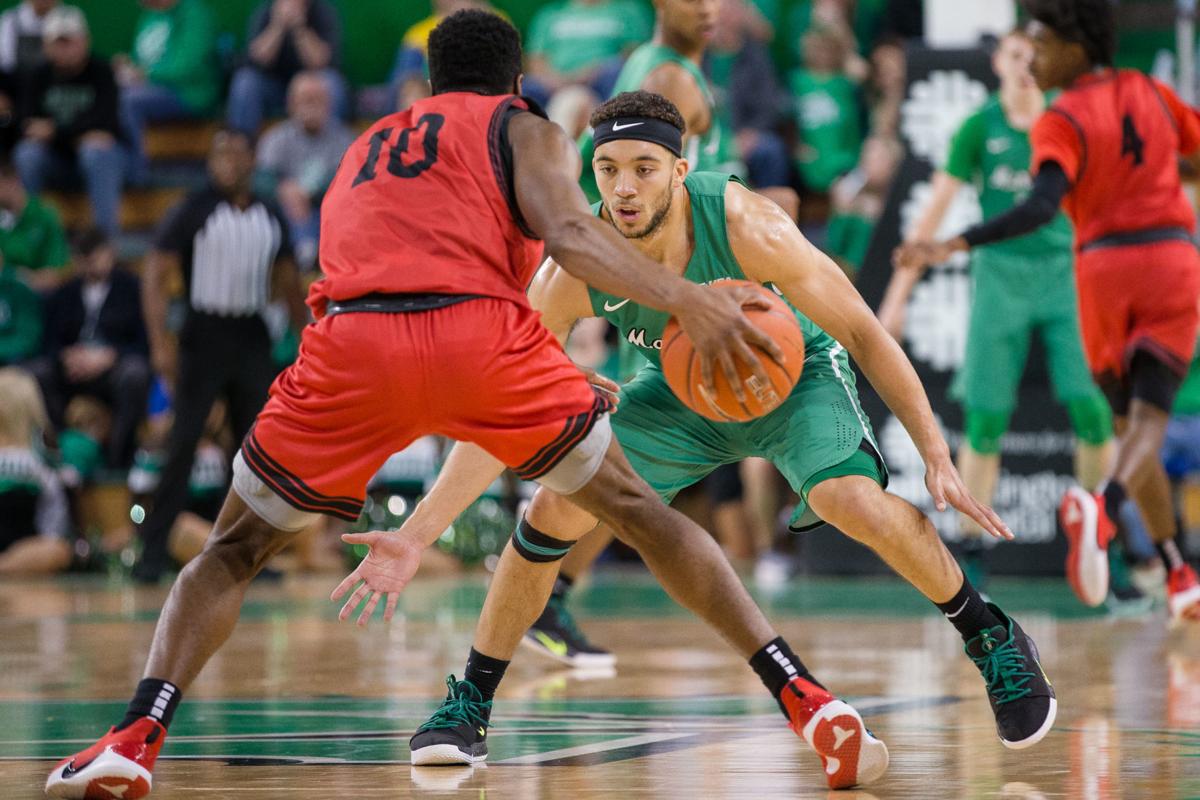 Marshall’s Jarrod West defends against Rio Grande’s Hadith Tiggs (10) during an exhibition game on Saturday at the Cam Henderson Center in Huntington. 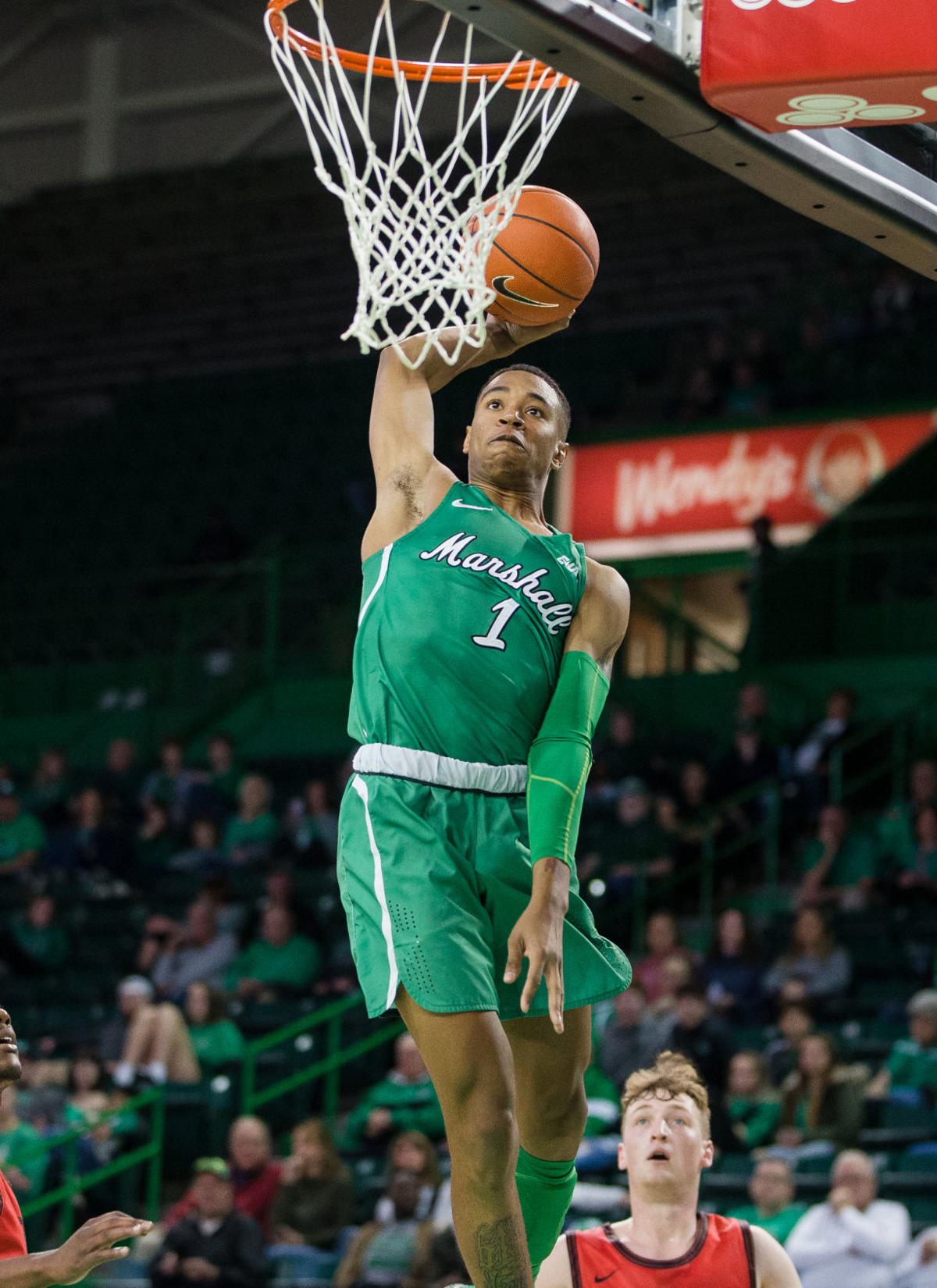 Marshall’s Taevion Kinsey (1) throws down a dunk as the Herd takes on Rio Grande on Saturday at the Cam Henderson Center in Huntington.

Marshall’s Jarrod West defends against Rio Grande’s Hadith Tiggs (10) during an exhibition game on Saturday at the Cam Henderson Center in Huntington.

Marshall’s Taevion Kinsey (1) throws down a dunk as the Herd takes on Rio Grande on Saturday at the Cam Henderson Center in Huntington.

Marshall University’s men’s basketball team played its biggest lineup in years Saturday in a 92-59 exhibition game victory over the University of Rio Grande in front of 5,462 spectators Saturday at Cam Henderson Center. For the most part, Thundering Herd coach Danny D’Antoni and his players said they came away pleased.

“I don’t know,” D’Antoni said of what he thinks of the lineup that at times featured 230-pound 7-footer Goran Miladinovic and 6-9, 299-pound Iran Bennett at the same time. “I wanted to see it. I don’t know about using it. It depends on how well they play on how long they stay.”

Miladinovic, Bennett and 6-9 players Jannson Williams and Mikel Beyers created a strong barrier for NCAA Division II Rio Grande to overcome. The RedStorm likes to drive to the basket, but found that a challenge against the Herd. Marshall blocked 13 shots and altered many more in holding Rio Grande, whose tallest player is 6-7, to a 20-for-64 shooting performance. Bennett, Miladinovic and Cam Brooks-Harris blocked three shots apiece. Williams swatted two.

“Rio’s a slower-paced team,” MU point guard Jarrod West said, comparing the RedStorm to Glenville State, which the Herd beat 100-66 on Tuesday. “They like to come down and set it. They have some guys who like to go to the bucket.”

One of those guys, 6-4 sophomore Gunner Short, found driving the lane unproductive as he missed his first six shots. The former Fairland and Boyd County high school standout moved outside, however, and found success, hitting four of his next eight shots, three from 3-point range, to finish with a team-high 11 points.

The RedStorm, which clobbered Ohio State University-Mansfield 101-25 on Friday, led only once, at 4-3. Darius George’s basket at 17:09 of the first half gave the Herd a lead it never relinquished. Marshall led by as many as 43 after Dajour Rucker scored off an offensive rebound with 4:04 left in the game.

“When he got in there, he played pretty good,” D’Antoni said of Rucker, a 6-7, 250-pound freshman who finished with four points and one rebound. “There are some things that he can do.”

Williams said he was pleased with Marshall’s offense, which made 39 of 72 shots (54.2 percent), including eight of 25 (32 percent) from beyond the 3-point line. He was impressed with the Herd’s 15 assists.

“Last game was very frantic and chaotic,” Williams said. “Glenville pressed us the whole time, so it was hard for us to really get in the flow. I thought we did a better job of that today. The more games and practice reps we get, our team chemistry will get better. I thought it was better today.

West, who issued seven of those assists, preferred to discuss the Herd’s defense.

“I thought defensively we were pretty good,” West said. “They had 23 turnovers. “Transition defense is what we’ve been trying to work on in practice a lot. Coming into this game, we really tried to lock down in transition. They were a slow-down team and I think that played into our favor.”

Marshall men's basketball takes on Rio Grande during an exhibition game on Saturday, Nov. 2, 2019, at the Cam Henderson Center in Huntington.