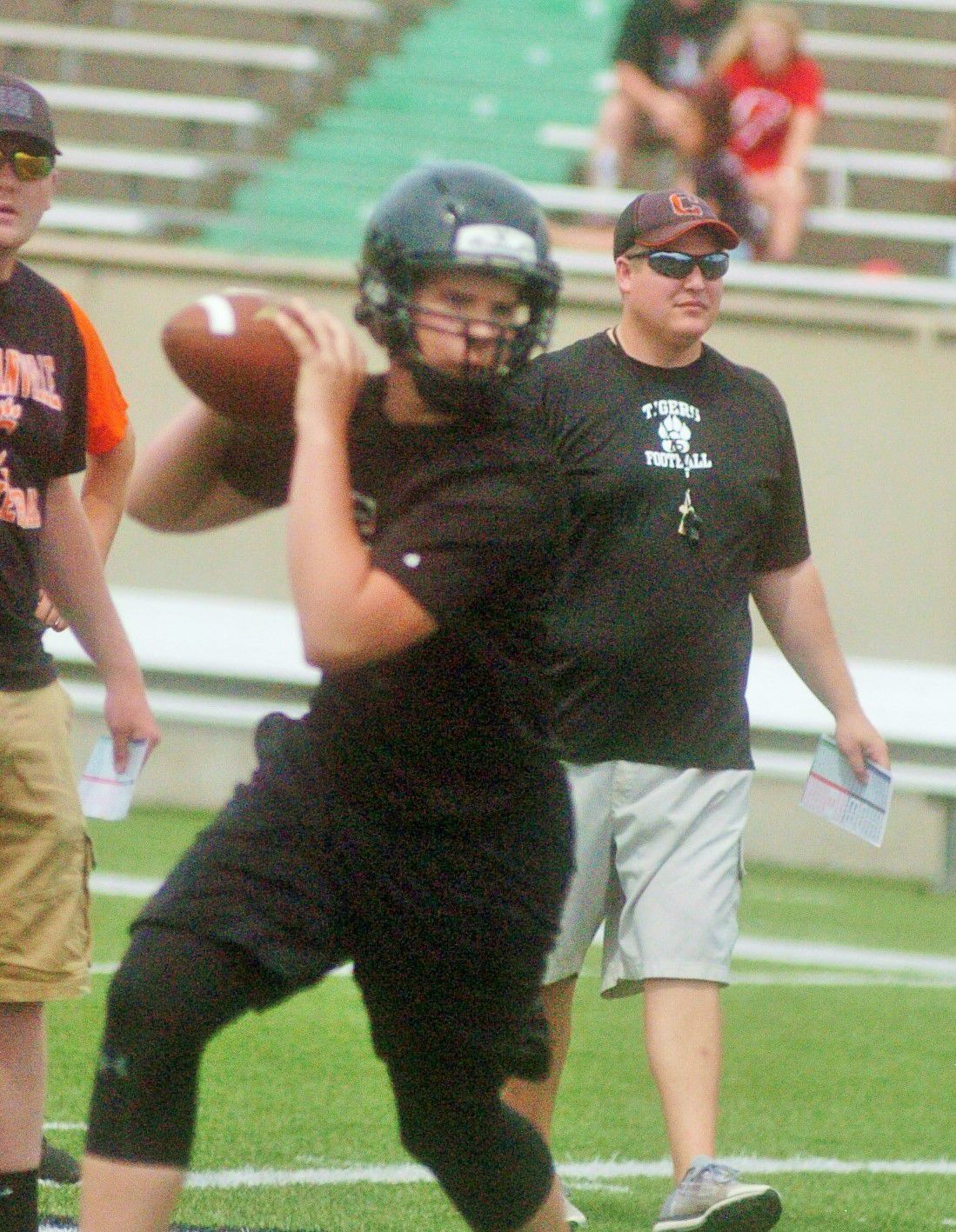 James Barker looks on during a practice last summer. 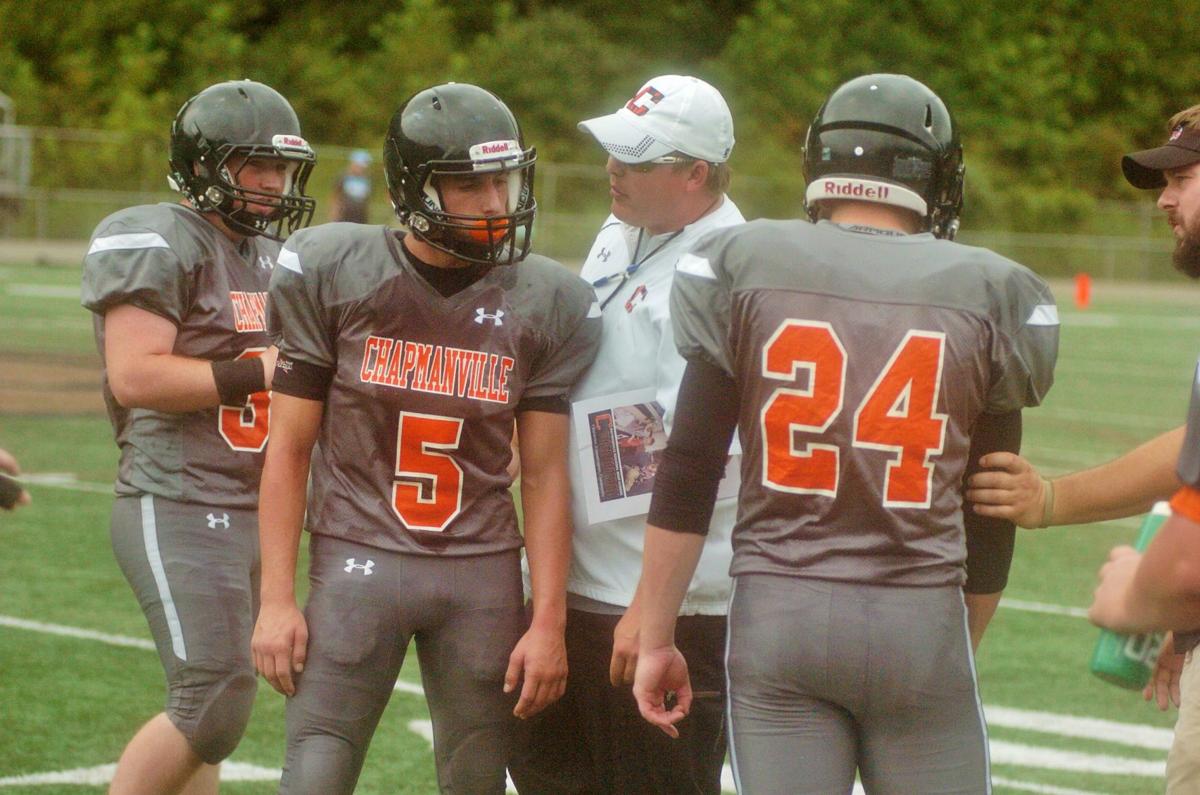 Chapmanville's James Barker talks with Tiger players in a preseason game against the Mingo Central Miners at Scott in 2018. 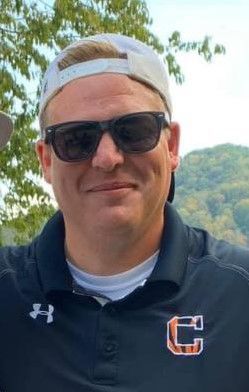 James Barker looks on during a practice last summer.

Chapmanville's James Barker talks with Tiger players in a preseason game against the Mingo Central Miners at Scott in 2018.

And that was to become a head football coach by the age of 35.

Barker did it, reaching that goal, on his 35th birthday on Tuesday, Feb. 11, as he was hired as the new Chapmanville Regional High School football coach during the regularly scheduled Logan County School Board meeting.

“What a birthday present huh?” Barker said. “I had set a personal goal a long time ago to be a head coach by the time I was 35. It just so happened that today was my 35th birthday, so I’m pretty excited about it.”

Barker, a longtime Chapmanville assistant coach, seemed to one day be destined to follow in the footsteps of his father and grandfather as head coach of the Chapmanville football team.

He replaces outgoing coach Rob Dial, who led the Tigers the last four seasons to a 21-19 mark before resigning in December.

“I just hope that I can continue to lead us in the right direction,” Barker said. “Rob Dial did a fantastic job over the last four years. I don’t know how much people realize how great of a job Rob Dial did and I want to make sure people know that.”

Barker is the third generation of his family to become the head coach of the Chapmanville Tigers.

He is the son of former Tigers’ coach and current athletics director George Barker, who last was head coach at Chapmanville for 12 seasons from 2004-15 and led the Tigers to six playoff appearances, including a Class AA state semifinal berth in 2013.

Barker’s grandfather is the late Fletcher “Shag” Barker, a legendary former football coach of the Tigers. Both George Barker and Fletcher Barker are members of the Chapmanville Athletic Hall of Fame.

“This is a big honor for me, stepping into a program where my grandfather was one of the first coaches at Chapmanville,” James Barker said. “He was the third coach ever at Chapmanville. It’s also an honor following in the footsteps of my dad who came over from Logan who coached here for a decade.”

“The switch last year helped our staff and our continuity,” Barker said. “Personally, it helped me see things differently. I got to coach a little bit differently too. Offense and defense is completely different in the style of coaching. I enjoyed it last year to a point but it was challenging. I learned a lot this past season being on the defensive side of the ball and I hope that translates on to the coaching position.”

Barker’s last head coaching stint was when he was the head coach at Chapmanville Middle School in the 2011 and 2012 seasons.

Barker is a 2003 Logan High School graduate and former football player for the Wildcats. He went to Logan when his father George was head coach of the Wildcats during that era. Barker later graduated from Marshall University in 2010.

After his stint at CMS, Barker joined George Barker’s staff and then Dial’s. He said he learned so much from both head coaches.

“The biggest thing that I learned from my father to be a head coach is to surround yourself with people that you trust and surround yourself with a good staff,” James Barker said. “I think that we’ve done that at Chapmanville the last 15 or so years. I hope all of the coaches decide to stay but we’re going to add a few more faces. Coach Dial, my dad, Bo Berry, Larry Dingess, Ron Jones, Zach Belcher, people like that, you need a lot of those guys who have been around to help build our program. They’ve done an excellent job. Those guys are not only great coaches but they are also great friends. We’ve been very blessed here at Chapmanville to have those people.”

Barker hopes to lead the Tigers back to the playoffs, something that had eluded Dial in his four-year run as Chapmanville went 5-5, 6-4, 5-5 and 5-5 in those years. CRHS, however, was in playoff contention each year.

Chapmanville’s last playoff berth was in 2015 when the Tigers had home field advantage but lost a 42-14 first-round post-season game to Robert C. Byrd.

{span style=”color: #000000;”}“{span style=”font-family: Arial, sans-serif;”}{span style=”font-size: small;”}I’m excited for our kids,” he said. “I can’t wait to see what they can do. Last year, I thought 5-5 was a really good record for our football program. Our seniors did a heck of a job staying together when we started out 0-3. We got better as the year went on. I’m proud of the way we finished. We have got a lot of kids coming back. We lose a lot too. It’s very very tough to replace a kid like Chase Berry. But I’m excited about the direction of our program.”

Barker made the official announcement on his Facebook page on Tuesday evening. He took the job with heavy hearts following the death of his uncle Raamie Barker, the Chapmanville mayor, who passed away at the age of 73.

{span style=”color: #1d2228;”}“{span style=”font-family: Arial, sans-serif;”}{span style=”font-size: small;”}First, I would like to thank everyone for the birthday wishes,” Barker said. :I say it every year, but I truly do have the best family and friends. Glad you all stood by me this year and every year. Tonight, I was officially named the 13th head football coach in the history of Chapmanville, the third head coach at Chapmanville Regional. I am honored to lead our program into the 70th year of football in Chapmanville.”

{span style=”color: #1d2228;”}“{span style=”font-family: Arial, sans-serif;”}{span style=”font-size: small;”}I am also honored to be a third generation coach as my grandfather Fletcher ‘Shag’ Barker and my father George Barker have coached at Chapmanville before me. I take great pride in the history of our town, school, and football program. This announcement is obviously bittersweet with the passing of my uncle Raamie Barker who was always supportive of me and our family-as well as our football program. He was truly a great man, a special human being, and I will greatly miss his insight and wisdom in all phases of life.

Chapmanville is scheduled to kick off the 2020 season against its traditional season opener, Sissonville, on August 28 at home.

The Tigers then host Poca on Sept. 4, travel to Winfield on Sept. 11 and host Nitro on Sept. 18 before going to Scott on Sept. 25.

Chapmanville then hosts Herbert Hoover on Oct. 2 and observe a bye week on Oct. 9. The Tigers travel to Wayne on Oct. 16, host Logan on Oct. 23 and then close out the regular season with two non-conference games — Oct. 30 at Mingo Central and Nov. 6 at Man.

The Cardinal Conference will be a nine-member league starting in 2020 with Mingo Central’s exit.

Barker and the Tigers will be hitting the gridiron in June with the three-week summer practice period.

{span style=”color: #000000;”}“{span style=”font-family: Arial, sans-serif;”}{span style=”font-size: small;”}We’ll have a similar schedule this upcoming summer as we did last summer,” Barker said. “We’re excited to get things started. Not a whole lot is going to change because we’ve had a great staff and a great culture for a long time but I’ll get a chance to put my stamp on things. I’m excited about this opportunity. I have a running joke with Coach Dial. He said in his article that he’s going to be the biggest Chapmanville Tiger fan. He’s a great friend. He has my ear and I have his ear. He’s not going to disappear in my life or the players’ lives. He can still be a part of our program in any way that he wants to be.”