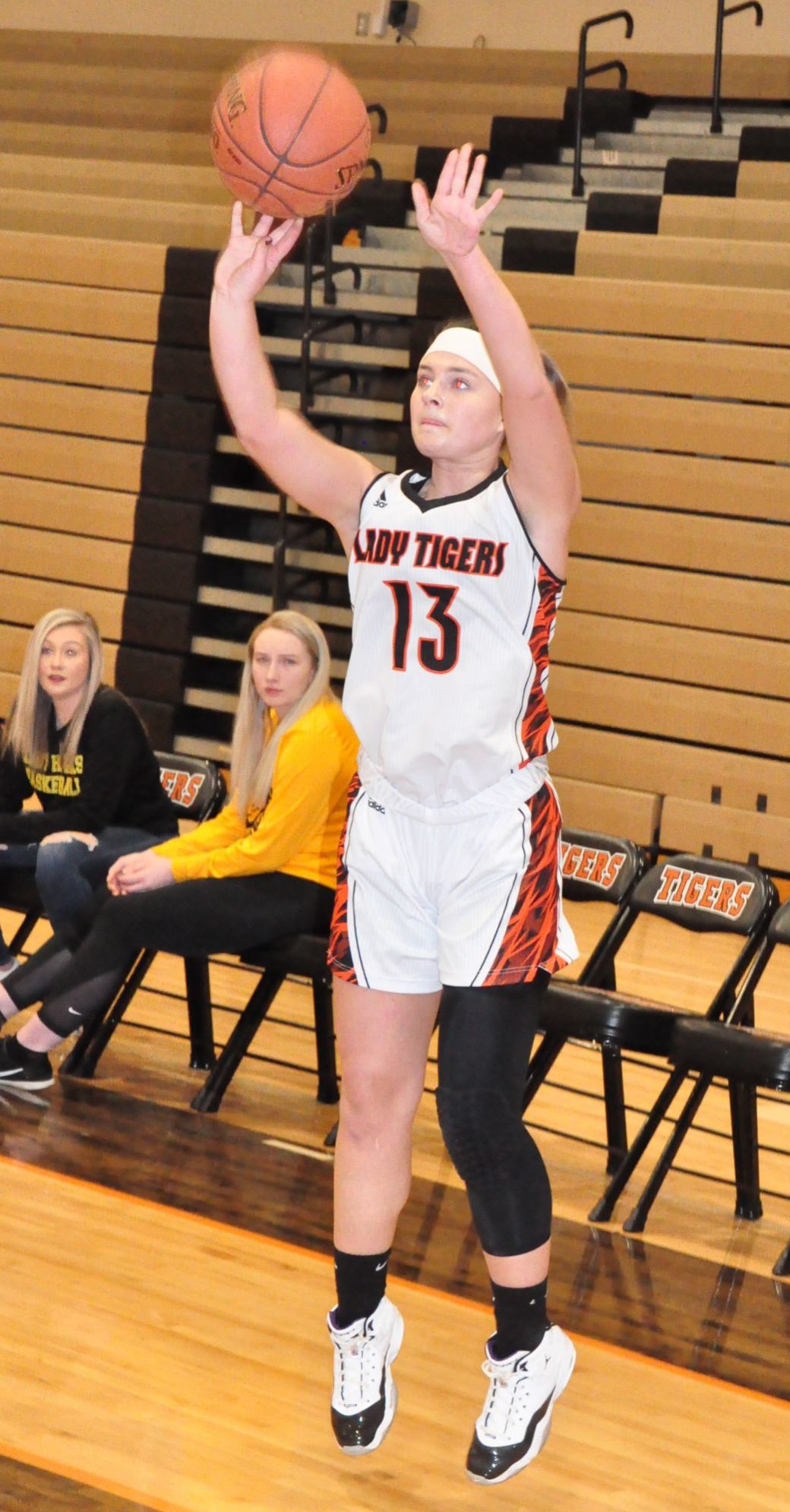 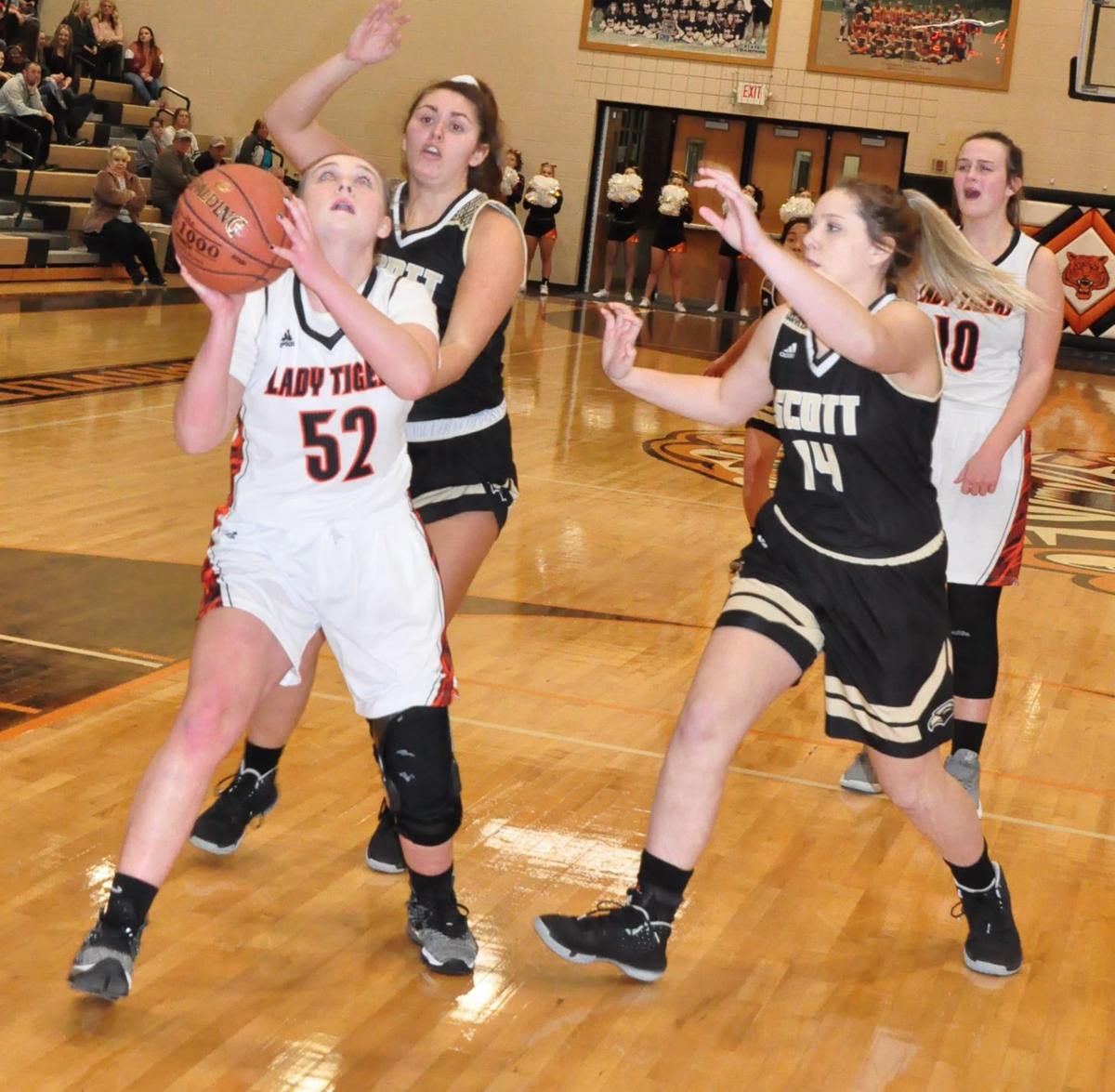 Chapmanville’s Allie Farmer (52) shoots in the Lady Tigers’ 66-43 win over Scott on Thursday at Chapmanville. 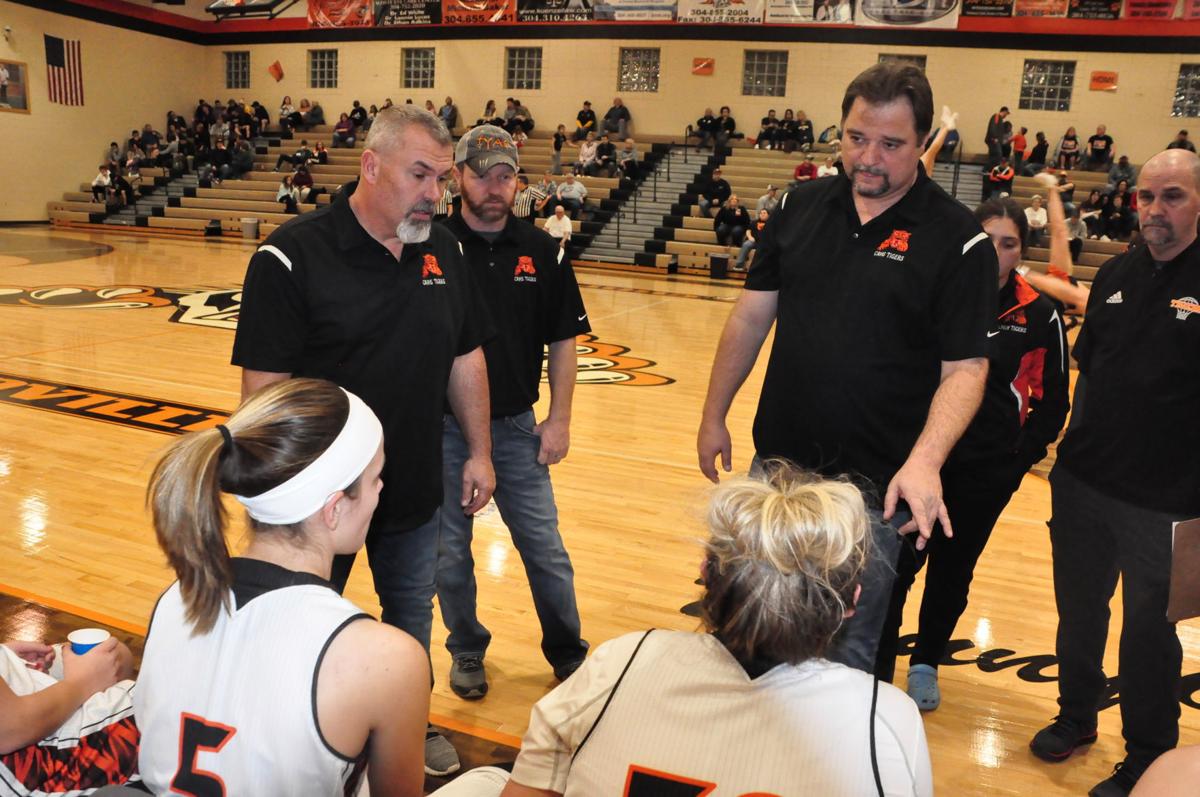 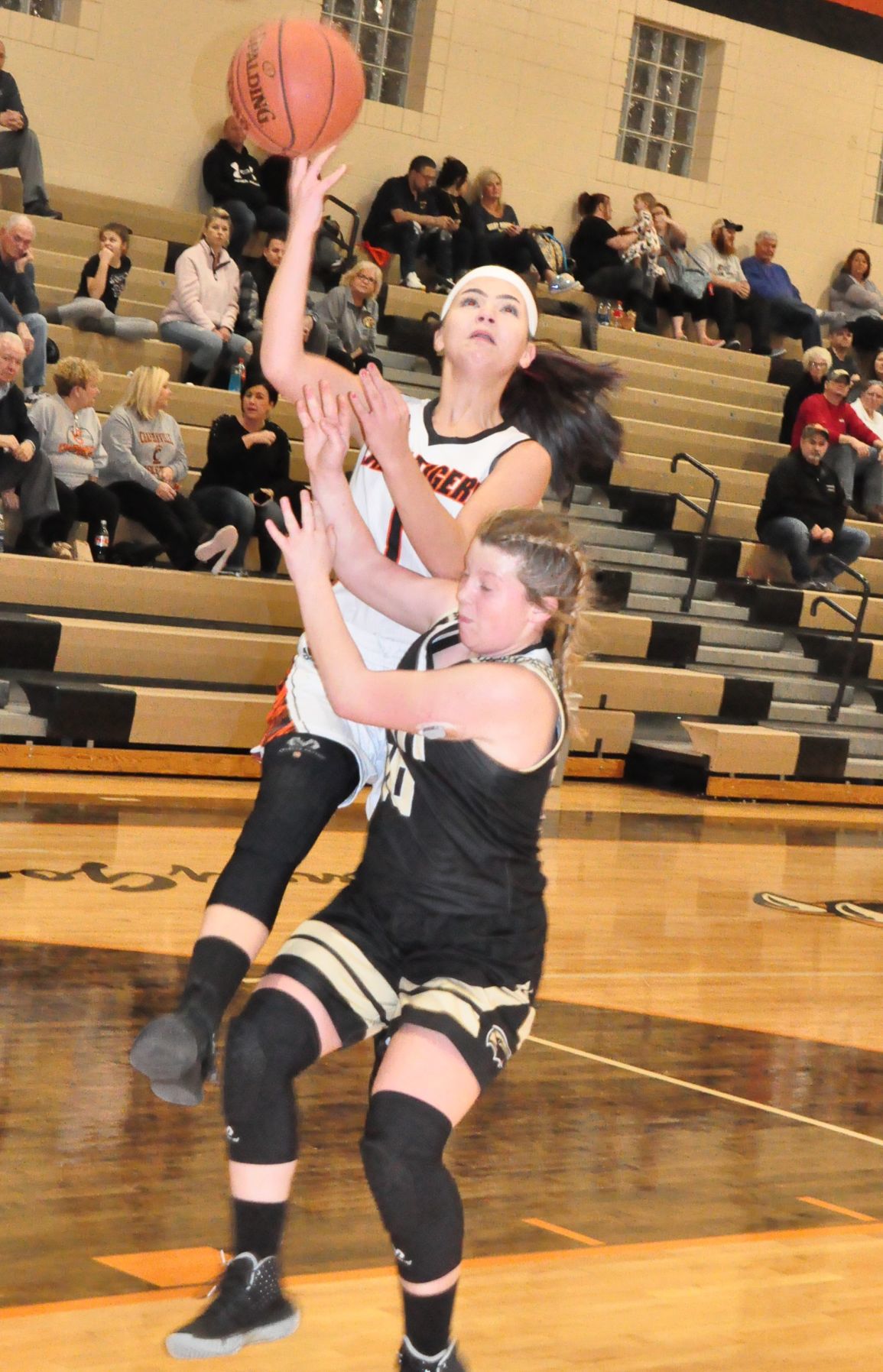 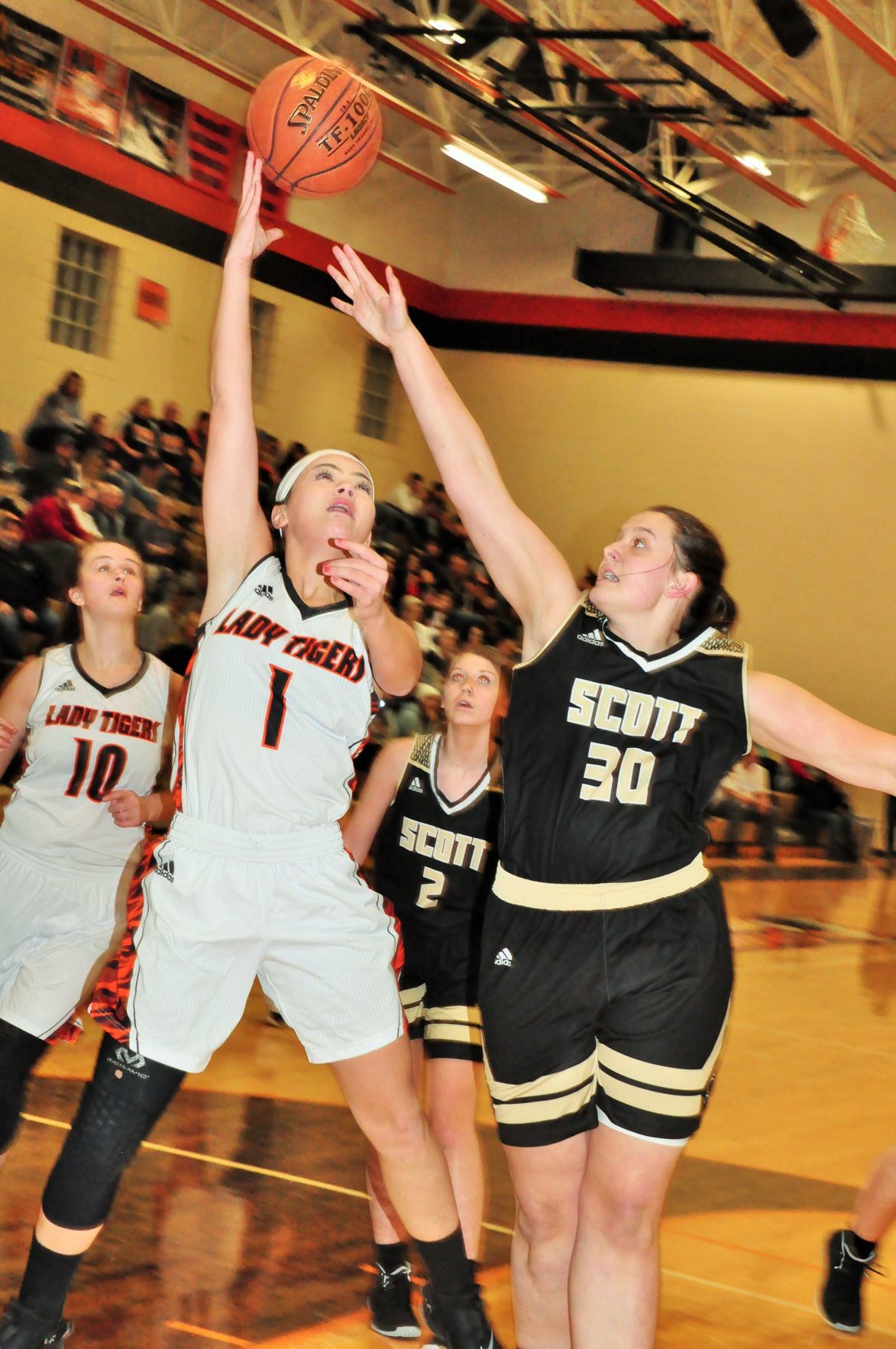 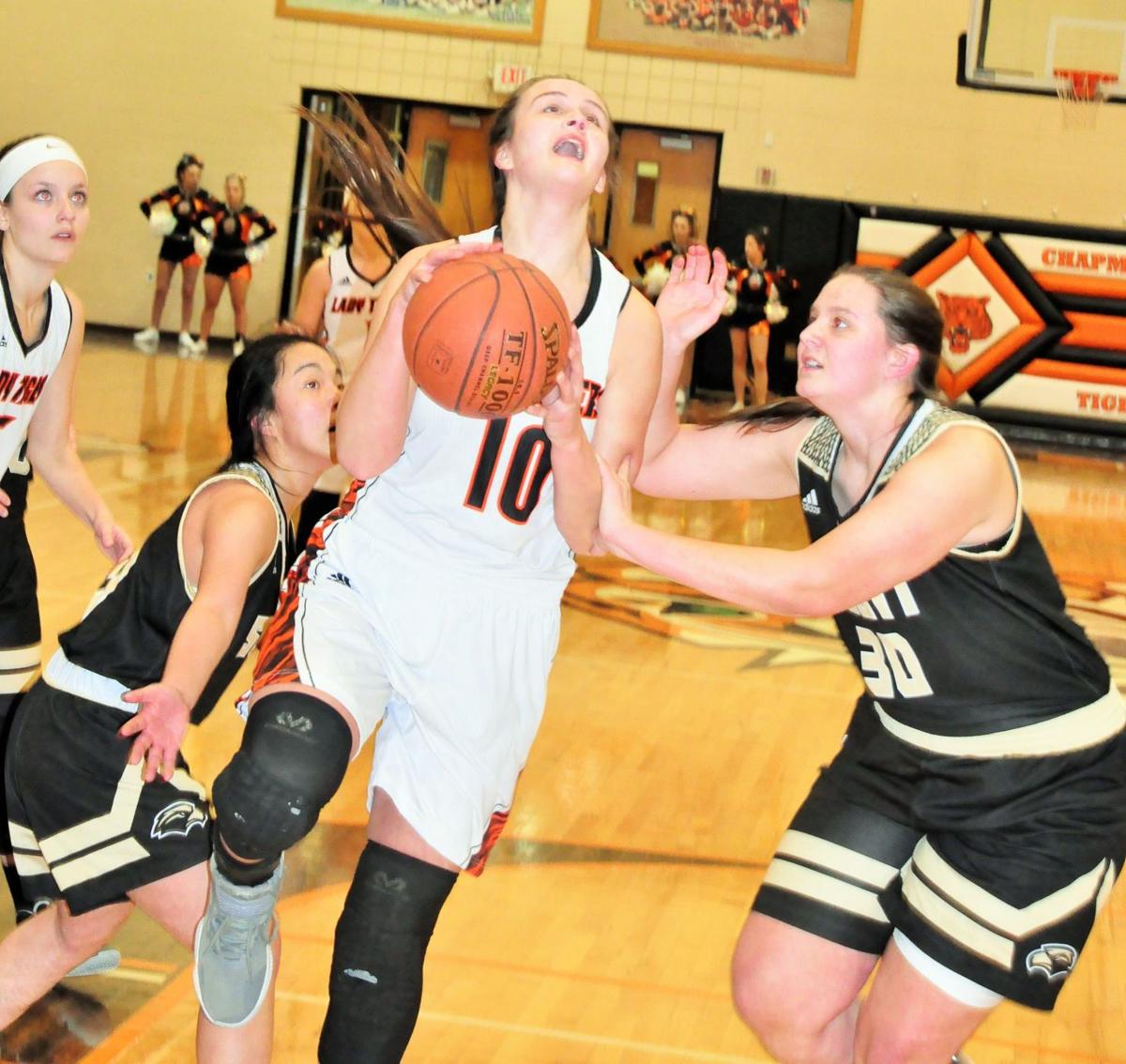 Paul Adkins/The Logan Banner Chapmanville Regional High School’s Hollie Blair drives into the lane for a shot in the Lady Tigers’ 66-43 win over Scott on Thursday, Jan. 9, 2020 at Chapmanville. 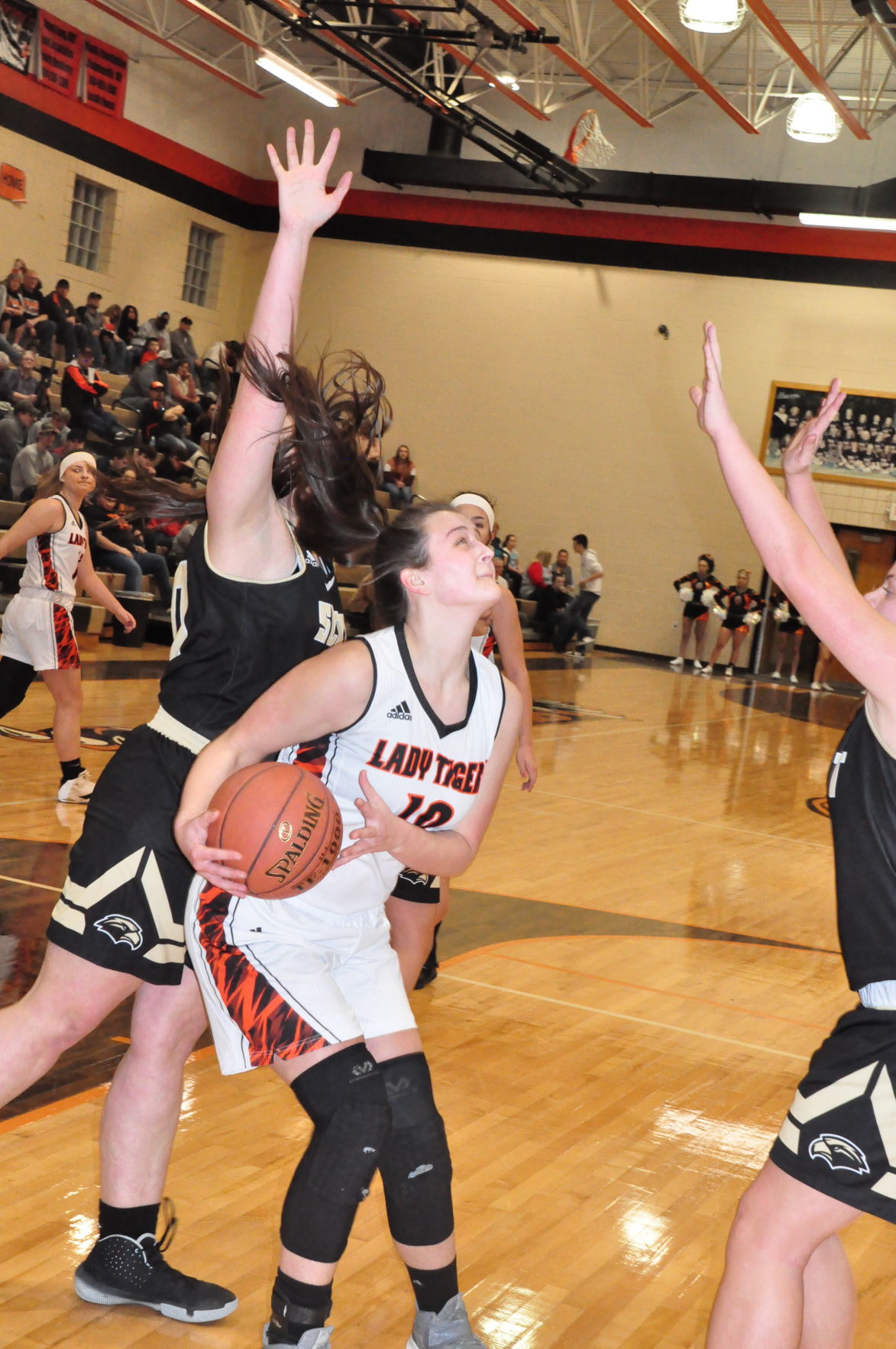 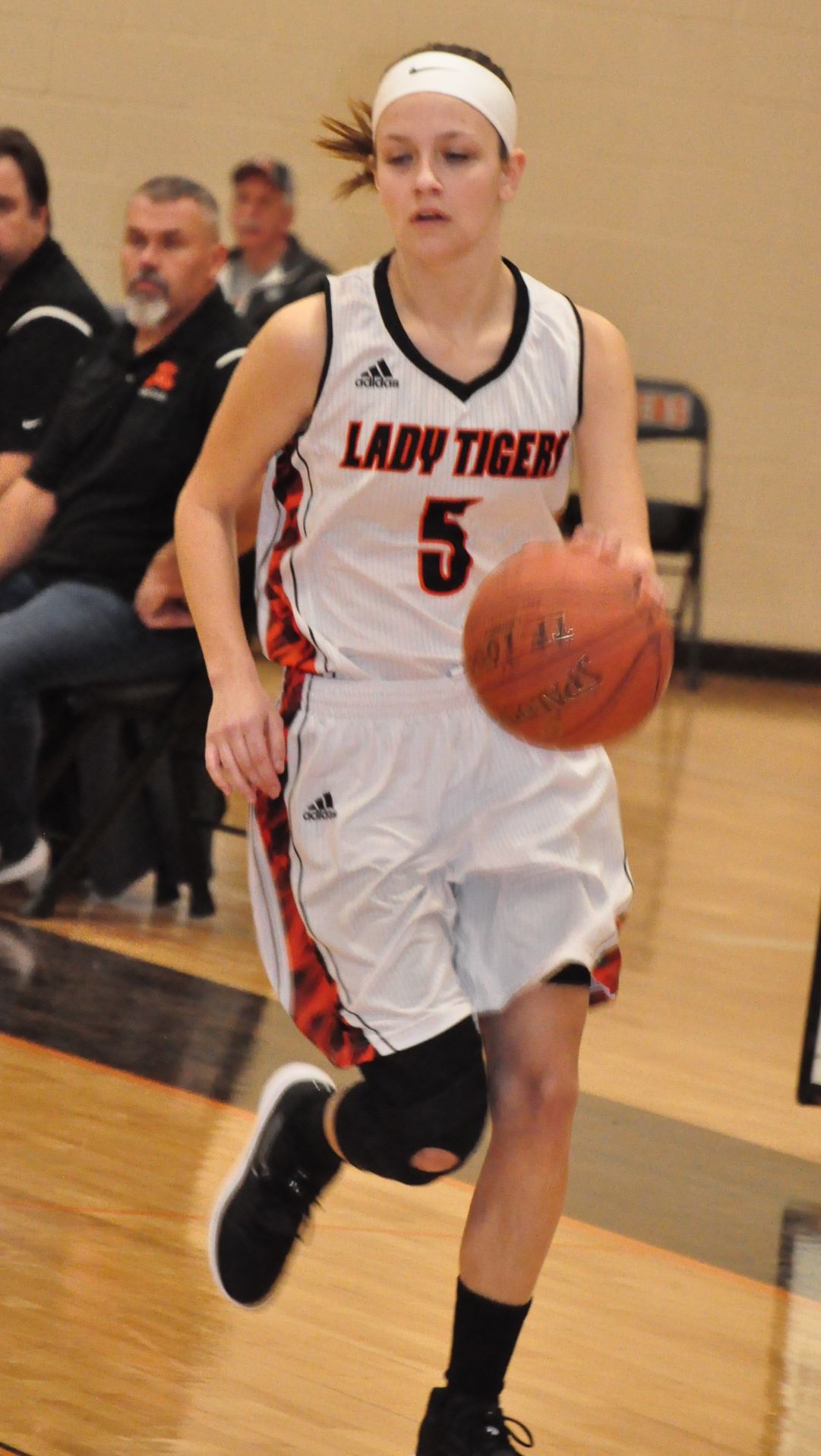 Chapmanville’s Allie Farmer (52) shoots in the Lady Tigers’ 66-43 win over Scott on Thursday at Chapmanville.

Paul Adkins/The Logan Banner Chapmanville Regional High School’s Hollie Blair drives into the lane for a shot in the Lady Tigers’ 66-43 win over Scott on Thursday, Jan. 9, 2020 at Chapmanville.

CHAPMANVILLE — Heading into the 2019-20 basketball season the Chapmanville Regional Lady Tigers had a lot of question marks.

All-State post players and 1,000-point scorers Kaylee Blair and Madison Webb were lost to graduation and also three other seniors.

The Lady Tigers had a lot of youth, particularly on their bench.

Depth has been a problem too.

In Thursday night’s 66-43 win over Corridor G rival Scott, Chapmanville dressed just 10 players. Reserve Claire Dingess was out, having recently sustained a sprained ankle in a game at Logan. Another key reserve and top player, Abbie Myers, transferred to Logan over Christmas break.

So far things are looking good for CRHS, which has won six straight games.

“We are playing well,” Lady Tigers’ coach Johnny Williamson said. “We are starting to come together and jell some. We are learning our roles and understanding what we need to do.”

Chapmanville jumped out to a 21-8 lead over Scott after one quarter and then coasted. The Lady Tigers were playing their fifth game in seven days and were playing on back-to-back nights. CRHS had defeated Mingo Central on Wednesday night, 55-48.

“Tonight we were a little bit flat I thought,” Williamson said. “But we’ve played five games in seven nights. Our legs kind of wore out some. Last night against Mingo Central was an emotional game. It was very intense. We only played five girls last night. So I knew that we were going to be a little bit sluggish tonight and we knew that it was going to happen.”

Graci Brumfield led Chapmanville with a 17-point game. She drilled three 3-pointers on the evening.

“Graci picked it up tonight and started to hit her shots,” Williamson said.

CRHS also got a big boost from 6-foot center Hollie Blair, who tossed in 15 points and was able to control the low post.

“Hollie is playing really well. She started to play really well against Summers County,” Williamson said. “We had to have her against Martin County because they are so big and physical. She played really well. Against Mingo Central, she had a really big block with about a minute to go in the ballgame. We try to go to her early in the game to get her confidence going. She seems to play better when we do.”

Blair has helped pick up the slack left off by the graduation of her sister Kaylee and Webb, a pair of 5-11 players who were so key to Chapmanville’s success the last four seasons.

“Any time when you have two post players that score 1,000 points that’s losing a lot,” Williamson said. “We knew that would be tough to replace but these girls are starting to pick it up. It really helps when you have three guards that can get you the ball. That demands so much attention and that helps in spacing.”

Shea Miller and Jenna Butcher led Scott (4-9, 1-6) with 12 and 10 points respectively. Gracie Ferrell had seven and Chloe Older and Emma Harmon had four each. Alanna Tomblin, Abby Walls and Leah Davis chipped in with two each.

Chapmanville swept the season series with Scott, also winning 60-38 on Dec. 9 in Madison.

CRHS led by as many as 19 points in the second quarter at 29-10 as Brumfield scored on a lay-in with 3:46 to to go until halftime.

Scott, however, battled back and chipped away at the deficit.

Butcher’s layup with eight seconds showing on the clock closed out Scott’s 12-2 run as the Lady Hawks inched to within 31-22 at the break.

Scott stayed close in the early moments of the third quarter.

Williamson then followed with a 3 and it was 38-26 Chapmanville.

Brumfield canned another trey with 1:09 left and the lead increased to 48-28.

Miller answered with a deep, 24-foot 3-pointer from downtown Chapmanville. Then it was Harmon who scored on a rainbow kiss off the top of the window at the buzzer as Scott trailed 50-33 after three.

The Lady Tigers led by as many as 29 points in the fourth quarter and coasted to victory.

Coach Williamson said Chapmanville is playing well and must keep it up in the second half of the season. Several big games are ahead, including home-and-homes with county rival and sectional foe Logan. The Lady Tigers also have two games against Wayne and single games against Nitro and Winfield.

Chapmanville is 3-1 against sectional teams. The Lady Tigers hope to keep that up and get the No. 1 seed for the upcoming sectional tournament.

Last season, Chapmanville won the sectional title but were upended by Sissonville on its home floor in one of the two Class AA Region 4 Section 2 co-championship games.

“It’s very important to try and get the number one seed and try to win your section because on the other side you have Winfield, Nitro and Wayne,” Williamson said. “All three of them will be a challenge no matter which one you get but you at least want to get them on your home floor.”

Williamson said he hopes to get Dingess back in the lineup soon. With a small roster, the Lady Tigers will need her.

“Claire twisted her ankle against Summers County,” he said. “She’s probably going to be out a week or two. That hurts us but she’ll be back.”

CRHS is scheduled to return to action with Thursday’s home showdown against Wayne. The Lady Tigers then host Sissonville on Jan. 20 and play at Logan on Jan. 23.

“We play Wayne on Thursday and that should be a good one,” Williamson said.

CHAPMANVILLE 55, MINGO CENTRAL 48: The Chapmanville Regional High School girls’ basketball team ran its record to 8-2 on the season and won its fifth straight game as the Lady Tigers defeated Mingo Central 55-48 on Wednesday night at home.

Olivia Dalton and Ali Williamson pitched in 17 points each for Chapmanville, while Hollie Blair had 12. Allie Farmer and Graci Brumfield netted five and four points respectively.

Ziah Rhodes led Mingo Central with a game-high 18 points. Scarlett Thomason had 13, while Zoe Evans had eight, Jena Wagoner seven and Maliah Martin two. The Miners led 12-10 after one quarter but fell behind 23-22 at halftime. Chapmanville led 37-34 after three and outscored Mingo Central 18-14 in the fourth.