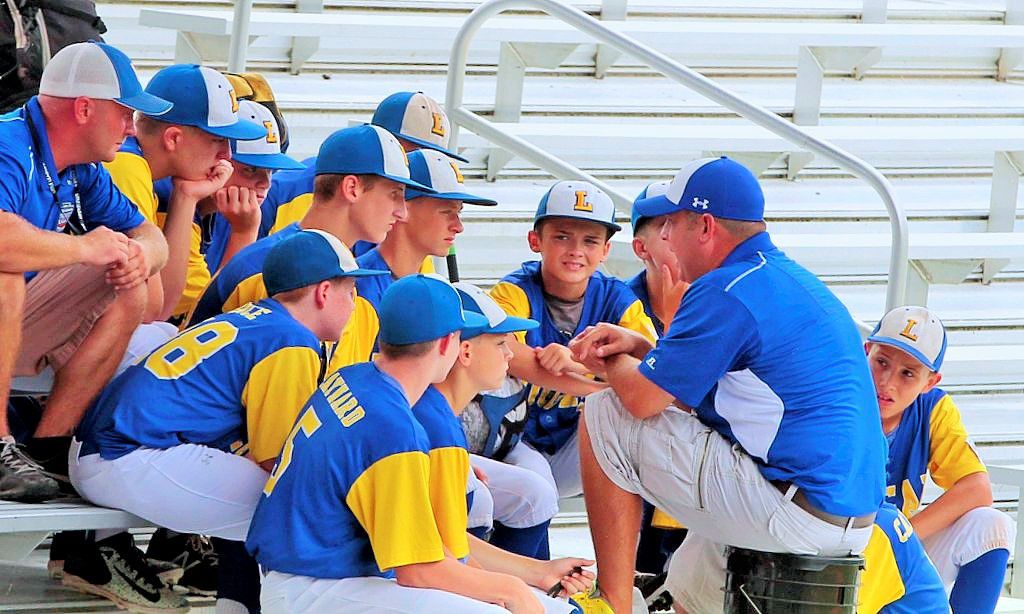 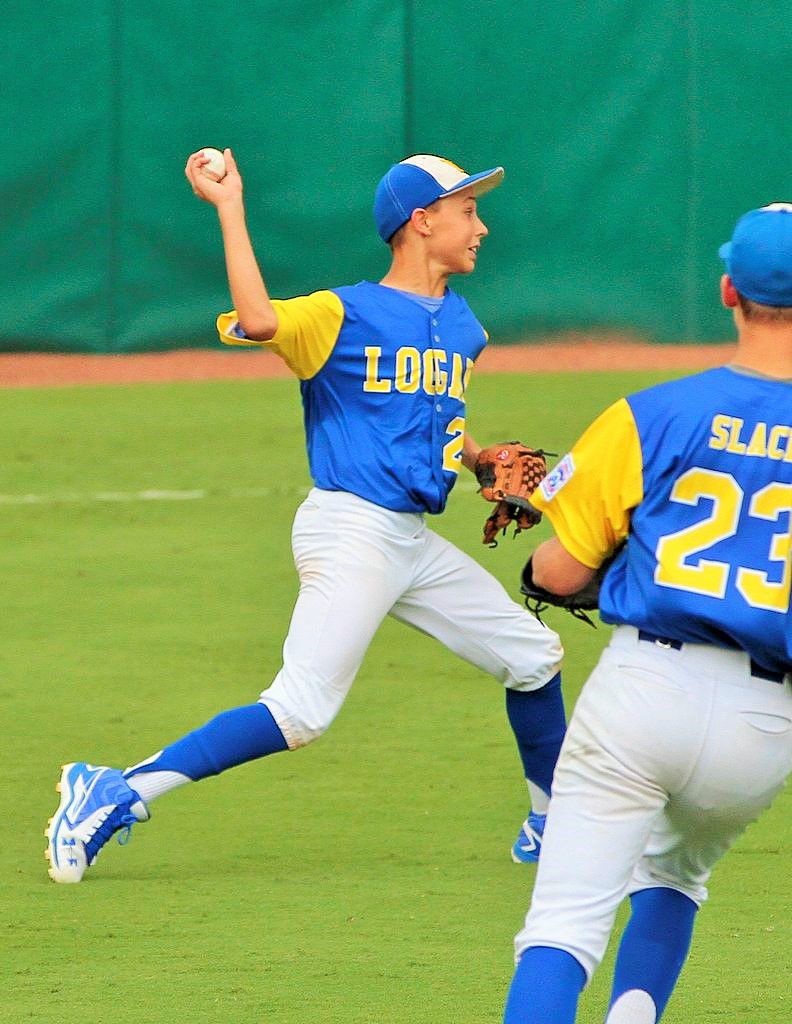 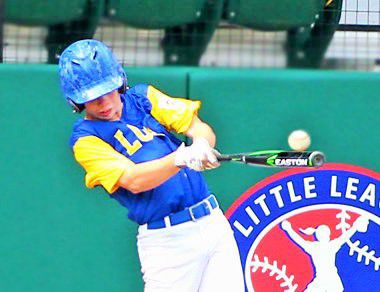 Logan's Dawson Maynard hits a home run on this swing in the 2017 Southeast Regional Tournament in Georgia. 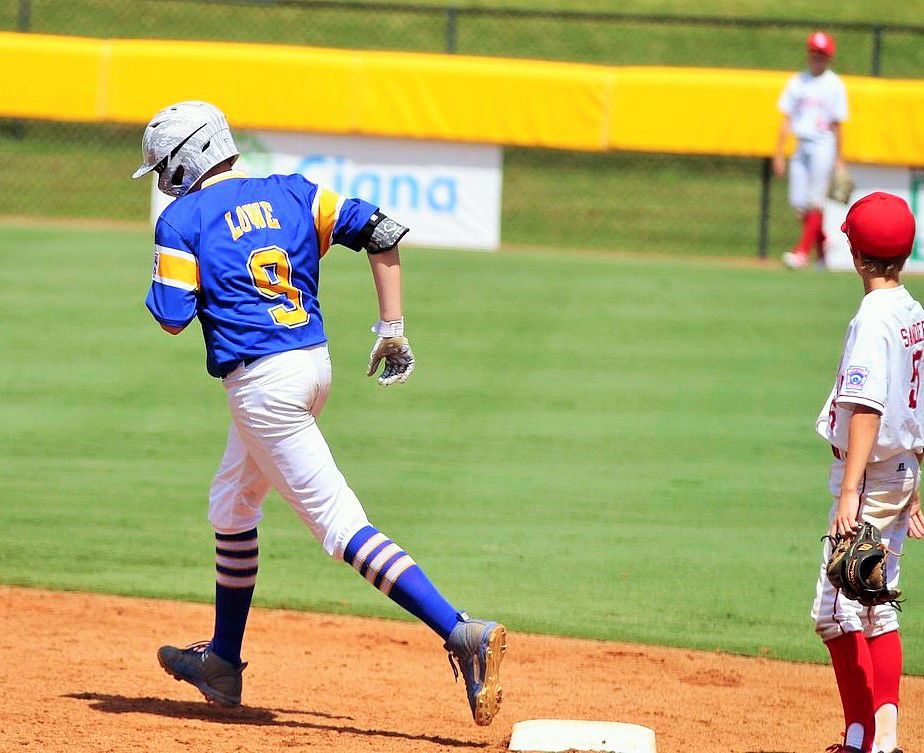 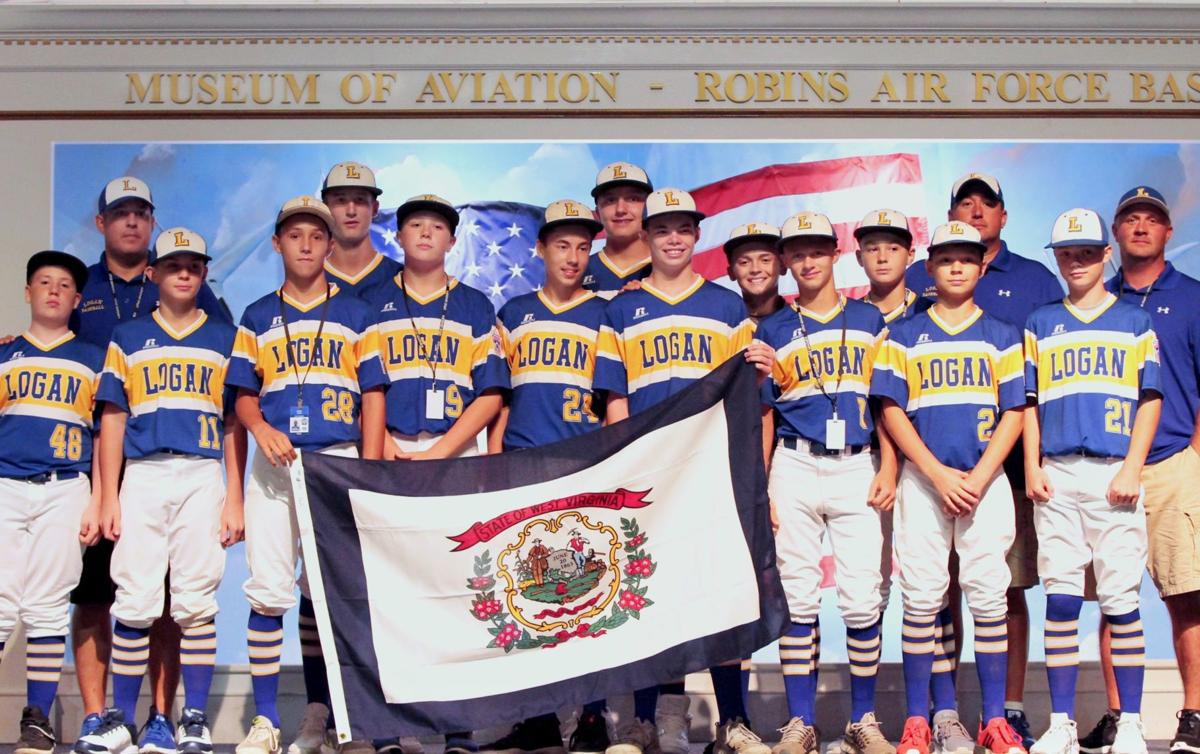 The Logan Little League All-Star team was treated to a banquet at the Museum of Aviation’s Century of Flight Hanger at Robin’s Air Force Base prior to the 2017 Southeast Regional Tournament in Warner Robins, Ga. The banquet welcomed players, coaches, family and friends. The Logan all-stars were presented a West Virginia state flag.

Logan's Dawson Maynard hits a home run on this swing in the 2017 Southeast Regional Tournament in Georgia.

The Logan Little League All-Star team was treated to a banquet at the Museum of Aviation’s Century of Flight Hanger at Robin’s Air Force Base prior to the 2017 Southeast Regional Tournament in Warner Robins, Ga. The banquet welcomed players, coaches, family and friends. The Logan all-stars were presented a West Virginia state flag.

Editor’s note: This is Part II of a two-part feature story on the 2017 Logan Little League All-Star team. Part I appeared in the June 17 Logan Banner sports section.

With the Logan Little League starting up its abbreviated season on Monday this year marks the three-year anniversary of Logan’s stellar 2017 team.

Logan’s 11-12-year-old All-Stars had a memorable run in ‘17, winning the league’s first state championship since 1980 and advancing to play in the Southeast Regionals in Warner Robins, Georgia.

Then it was on to the state tournament, where Logan went 5-0, winning the state championship.

Logan defeated ripped Barboursville (21-0), Huntington (13-2) and St. Albans (10-4) in preliminary play, then downed Grant County (3-1) in the state semifinals before beating Winfield (8-4) in the state finals.

Logan moved on to the Southeast Regionals and were competitive, but ended up losing both games to get eliminated.

The 2017 Logan All-Stars were managed by Doug Williamson. Also on the Logan staff that year were coaches Larry Ramey and Mark Lowe.

Many of those Little Leaguers have now filtered up to the high school team.

“That Little League group was a special group,” said Logan High School baseball coach Kevin Gertz, a member of Logan’s 1980 state championship Little League team. “My group in 1980 won the state championship. I’m 53-years-old now and I can still remember to this day all my buddies and what we went through and all the hard work that it took. When this group did this in 2017 it brought back a lot of great memories.”

Gertz said he followed the ‘17 team and watched them progress.

“They worked hard. In the mornings they went through strength and conditioning with one of the dads,” he said. “Jarron’s dad put them through a workout regimen that surprised a lot of these kids but they stuck it out and went through it. It’s really paid off to this day because of their strength. The training that they did, all the push-ups and sit-ups, paid off. He really really worked them hard. Those kids got so much stronger. I remember doing things like that when I played with the heavier bats that we swung to make us stronger. It takes talent to win titles which that group had but it takes work and dedication and they did that too, practicing two or three times as day. That’s why they were as good as they were and are to this day.”

The 2017 Logan All-Stars were a special group, complete with solid and deep pitching and power hitting all through the lineup.

“When Slack pitched Ramey was the catcher,” Gertz said. “Konner Lowe played first base. Dawson Maynard played second. Jarron Glick was at short and Garrett Williamson played third. The outfielders were Kolton Goldie, Ryan Roberts and Caden Dotson. Those were the primary starters.”

Here is a look back at the 2017 Logan All-Stars’ game by game results:

GREENVILLE, S.C. 8, LOGAN 4: An 8-4 loss to Greenville, South Carolina ended up taking the Logan 11-12 All-Stars out of the 2017 Southeast Regionals at Warner Robins, Georgia.

Both Southeast Regional tourney games were streamed live by ESPN3.com.

Logan trailed Greenville 8-1 in the fourth inning. Logan had scored its run in the bottom of the third inning as Aiden Slack ripped a deep, no-doubt solo home run to straight-away center field, cutting it to 2-1. The blast was estimated at some 300 feet.

Slack was Logan’s starting pitcher and was relieved by Glick in the fifth inning and later Maynard.

Logan’s left-handed hitting Lowe, nicknamed the “Junior Bambino” for his Babe Ruth-like mannerisms, then mimicked the Sultan of Swat as he clubbed a deep, opposite field three-run homer to left center, trimming the deficit to 8-4 in the sixth.

Greenville was then able to close out the win.

Vance was 2-for-3 to lead the Logan bats. Williamson added a double.

WEST BOYNTON BEACH, FLA. 11, LOGAN 7: The Logan All-Stars opened the 2017 Southeast Regionals by putting up a fight against West Boynton Beach, Florida, but ended up falling 11-7 in the rain-delayed game from Warner Robins, Georgia.

Logan, making its first regional appearance in 37 years, was handed its first loss in the summer all-star season. Logan had opened with eight straight wins.

The game was delayed for five hours on a Friday and then finished on a Saturday morning.

Maynard blasted a deep two-run homer to center — a shot estimated at some 300 feet — to pull the Logan All-Stars to within 10-5. Lowe then followed with his own blast — another deep homer to right center — as Logan closed the gap to 10-6.

Slack later ripped a long two-out, solo homer to center, cutting it to 11-7. Ramey doubled and then Maynard struck out to end the game.

Lowe was 2-for-3 with the homer and two RBI. Ramey added a single for Logan, which was outhit 11-7 in the game.

LOGAN 15, MAN 0: The very deep and talented Logan 11-12 All-Stars made a big first impression in the 2017 summer all-star season with a 15-0 win over Man in the first game of the double-elimination District 2 Tournament at the Madison Little League field.

Logan used the long ball in the win over Man.

Maynard and Vance hit two home runs each for Logan, while, Glick and Dotson each went deep once.

Pinch-hitter Joey Canterbury also ripped a solo home run in Logan’s nine-run second inning but was called out when he apparently did not touch first base as he trotted around the bases. Man saw it and appealed, touching first, and Canterbury’s home run was nullified, being the third out to end the inning.

The game was stopped in the top of the fourth inning due to the 10-run mercy rule.

Maynard hit two home runs and was 3-for-3 with five RBI. Slack went 3-for-3 at the plate as well. Vance and Dotson each hit home runs for Logan.

Ramey, Lowe, Williamson and Glick all had one hit for Logan.

Vance was the starting and winning pitcher for Logan. He went two innings and struck out all six batters he faced.

Lowe then pitched one inning and also struck out the side.

Dotson then fired one inning and fanned two.

The game was stopped after four innings due to the 10-run mercy rule.

Logan outscored its opponents 56-1 during the districts.

Logan sent 24 batters to the plate in the bottom of the third inning, plating a whopping 21 runs, to close out the scoring.

Maynard led Logan as he was 4-for-5 at the plate with three home runs, including two grand slams, and an eye-popping 11 RBI.

Vance went 3-for-4 for Logan as he hit two home runs — including one grand slam — and also had a double to go along with his six RBI. Slack was 2-for-3 with home run and two runs knocked in. Willamson also went yard with a home run as he went 2-for-3 with one RBI. Ramey went 3-for-4 with three singles and one RBI for Logan.

Goldie went 2-for-3, while Glick was 1-for-2 with an RBI. Blankenship, Dotson, Roberts and Vance added one hit each for Logan. Vance drove in two runs, while Dotson and Roberts had one RBI apiece.

Brody Dalton had Chapmanville’s only hit — an infield single — in the third inning. Chapmanville plated its only run in the third as Alex Carver walked and later scored on Will Kirkendoll’s RBI fielder’s choice play as Logan was unable to turn a double play.

Slack was the starting and winning pitcher for Logan. He went three innings and allowed one run on one hit with seven strikeouts and three walks. Glick then put Chapmanville down in order in the fourth to preserve the win.

Vance and Slack were both 2-for-2 for Logan.

Vance, Ramey and Maynard combined for the shutout on the mound.

It was the second straight rout by Logan over good competition.

Ramey had two hits as well for Logan, while Vance, Slack, Maynard, Lowe, Goldie and Blankenship all had one hit each.

The Logan All-Stars were led in the win by Ramey, who had two doubles and a single. Vance, Lowe and Goldie had one hit each.

Slack, Glick and Williamson combined to pitch the win on the mound for Logan.

LOGAN 3, GRANT COUNTY 1: With a 3-1 state semifinal win over Grant County, the Logan All-Stars advanced to the 2017 state championship game.

Logan took a 2-0 lead with two outs in the first inning of Thursday’s game as Ramey reach on a base hit, Maynard doubled and then Lowe drove in both with a two-run single.

Vance then blasted a solo home run in the third inning.

Vance was the starting and winning pitcher. He lasted 5 1/3 innings before Logan opted to go to the bullpen to get out of a sixth inning jam.

With the score 3-1 and with runners at second and third, representing the potential game-tying runs, Glick then came on to pitch, striking out two batters to end the game and send the Logan All-Stars into the state finals.

LOGAN 8, WINFIELD 4: Logan won its first Little League state title since 1980 with an 8-4 win over Winfield in the 2017 state finals at Huttonsville in Randolph County.

“It’s been a long, long nine days,” Williamson said, referring to Logan’s extended stay. “It all hasn’t sunk in yet. We’re excited to be able to win it and play in the regionals.”

The game was delayed twice by lengthy rain delays.

“We didn’t play our best this week,” Williamson said. “But we played well enough to win every game that we are in. We had different kids step up in every game.”

Lowe led Logan in the state finals as he hit two home runs.

Slack also hit a homer for Logan. Vance, Ramey and Blankenship had one hit each.

Slack was the starting and winning pitcher for the Logan All-Stars. Glick then came on the pick up the save.