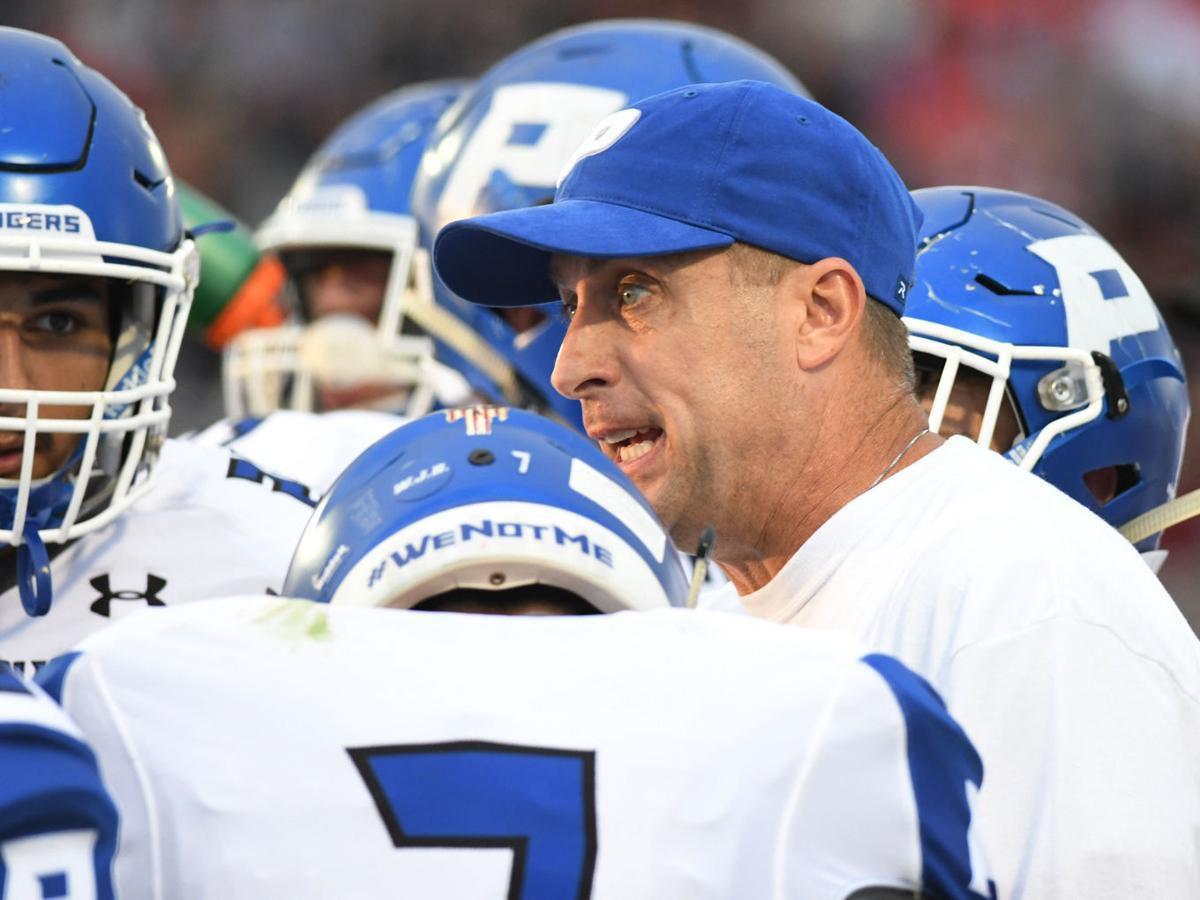 Paintsville coach Joe Chirico, a Logan High School graduate and Logan native, has led his Tigers to an impressive 78-19 record in seven seasons as the Tigers’ head coach. 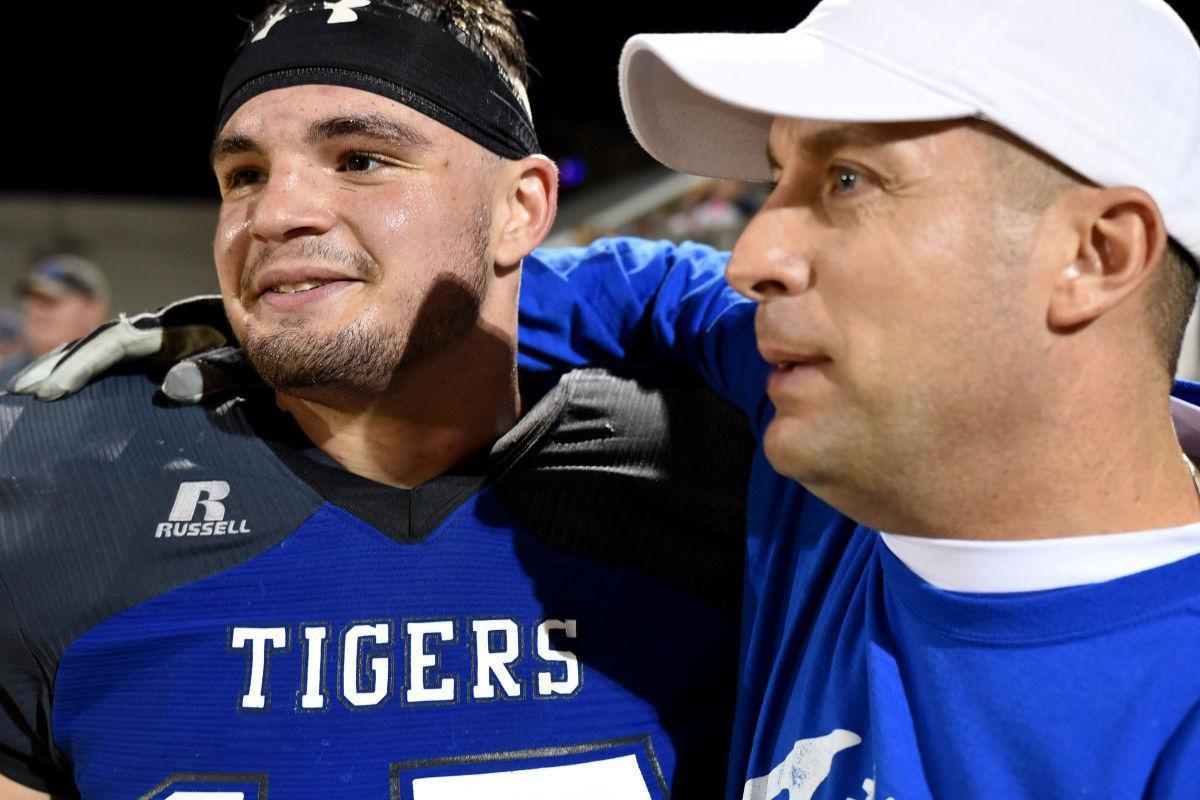 Paintsville coach Joe Chirico greets former All-State linebacker Kash Daniel after a win in 2015. Daniel would go on to have a stellar four-year football career at the University of Kentucky.

Paintsville coach Joe Chirico, a Logan High School graduate and Logan native, has led his Tigers to an impressive 78-19 record in seven seasons as the Tigers’ head coach.

Paintsville coach Joe Chirico greets former All-State linebacker Kash Daniel after a win in 2015. Daniel would go on to have a stellar four-year football career at the University of Kentucky.

PAINTSVILLE, Ky. — When you think of Paintsville football you think of Walter J. Brugh, the late legendary coach.

Brugh was a tower of a man in football terms and his standing in the community, a US Army veteran, and head coach of his beloved Tigers for 39 years from 1956-94, leading Paintsville to a 280-136-5 record and two Class A state runner-up finishes.

After Brugh’s retirement after the 1994 season, David “Burrhead” LeMaster took over and led the Tigers for 10 seasons up until the 2004 campaign.

The Tigers struggled and went through some very lean years, uncharacteristic of the tradition rich and proud program.

Paintsville, the county seat of Johnson County, nestled in the Eastern Kentucky mountains, was used to winning on the gridiron.

And winning a lot.

After Runyon’s 10-3 season in 2005, Paintsville fell on hard times, suffering seven straight non-winning seasons.Two of those were .500 seasons while the other five were losing campaigns.

The Logan High School graduate and former football and basketball player for the Wildcats, went right to work.

Chirico, a former Paintsville assistant coach, took over the reigns in 2013 and went right to work.

In his first year after putting on the headsets, the Tigers produced an 8-4 season, its first winning campaign in eight years and a playoff victory over South Floyd before bowing out to Raceland.

Chirico and the Tigers kept improving.

Seven years later, Paintsville is back on top as a small school powerhouse in the Kentucky Bluegrass as the Tigers have won 11 or more games each season since under Chirico and have gone 79-18 (81.4 percent) overall, including a 16-7 mark in the playoffs.

Last year was the zenith.

At least so far.

Chirico’s Tigers made it all the way to Lexington and UK’s Kroger Field for the Class A state championship game, but lost 43-0 to rival Pikeville.

It was the third time Paintsville had lost in a state championship game in its history, something that eluded even the legendary Brugh twice — in 1978, a 15-13 loss to Fort Campbell thanks to a third-quarter field goal that struck the right upright and bounced through for the decisive points, and In 1985, when Paintsville took an early 6-0 lead against Crittenden County but played penalty-marred football the rest of the day and lost 14-6.

Last year’s state championship game was nowhere near that close but Brugh himself would probably have been proud of Chirico and the Tigers.

Paintsville has come a long way and is relevant again in eastern Kentucky football.

You also think of Pikeville and it’s long steeped tradition and three straight state championships from 1987-89 under former coach Hillard Howard and now the tradition carried on by head coach Chris McNamee.

But with Paintsville’s resurgence in recent years you have to throw the Tigers into that mix as well.

One man has led that charge.

And that man is Chirico.

“The success revolves around the kids,” Chirico said. “The kids and how hard they have worked have made the difference. I’m just a small piece of that. I have good assistants and I have really good guys around me. We all work well together. They understand what we are trying to do and they understand my philosophy. A lot of those guys that I have on staff I coached. A lot of these guys know me from me coaching them. We have really good players who work really hard. They come in to weight lift at 6 in the morning before school. They do a lot of things extra in order to be good. The credit has to be put on the kids.”

Chirico said he was happy to have known Brugh, who passed away in 2014 at the age of 87.

At the time of Brugh’s retirement, he was the winningest coach in Kentucky high school football history. He has since fallen to 15th. Haywood, who has coached at Belfry for 45 years and has seven state championships under his belt, currently holds the record with 449 wins.

“Walter was a very good guy to me,” Chirico said. “I knew Walter late in his life and he treated me to the utmost respect. He was one of the finest guys that I ever did meet. He got to see me coach quite a bit as an assistant. He also saw me in 2013 in my first year as the head coach. He got to see a couple of games but his health was deteriorating. He was very very instrumental to what Paintsville is as a school system and a football program.”

Paintsville basketball has also produced John Pelphrey, who led the Tigers the state tournament Final Four in 1987 and later went on to be a college assistant at Marshall and then as a head coach at Arkansas

The school’s baseball team has also won state titles. One of its alumni is former Major League shortstop Johnnie LeMaster, who had a 13-year Major League Baseball career with the San Francisco Giants, the Cleveland Indians and the Oakland A’s from 1975-87.

Paintsville has made it to the Class A state playoffs in all seven years since Chirico’s arrival, with three appearances in the state quarterfinals, two spots in the state semifinals and last year’s state championship game berth.

“I’m happy to see Paintsville do well and see the success that we’ve had,” Chirico said. “It’s been nice.”

Top players have also come up through Paintsville’s ranks.

The biggest name Chirico has coached at Paintsville was All-Stater Kash Daniel, who went on to start at linebacker at the University of Kentucky and was a two-time team captain before graduating last December. Daniel was a part of a senior class who won 32 games over the last four seasons, the most wins for UK in a four-year span since 1949-52, when Paul “Bear” Bryant coached the Wildcats.

“It was great coaching Kash. He was a hard worker,” Chirico said. “Kash had a great career. We also had Kent Phelps and Jaylyn Allen. Kent had a great career and went to play at Wofford in South Carolina. We’ve had a bunch of guys who have had outstanding careers and helped us win a bunch of games.”

With Paintsville and Johnson Central both piling up the wins in recent years both of Johnson County’s high school football teams have made a lot of noise.

Paintsville and Johnson Central used to play every year in the Apple Bowl, usually played on a Thursday night in October and coinciding with the city’s annual Apple Festival. The game was discontinued in 2008 due to the size differential of the schools and Johnson Central’s sheer dominance in the final years of the series.

The Apple Bowl had one of the coolest trophies around: an actual apple cider barrel with the school logos and the scores of the games painted on the wood.

Chirico said he’s not aware of any talk to restart the rivalry.

“They have a great thing going on over there. They (Johnson Central) is the two-time state champion,” he said. “But look at the success of Johnson Central football as a whole. They’ve went to five straight finals and two two and we went to the finals once. There’s been a lot of games won in Johnson County by these two schools.”