Sign Up
Log In
Purchase a Subscription
You are the owner of this article.
Edit Article Add New Article
You have permission to edit this article.
Edit
Welcome, Guest
Home
News
COVID-19 Vaccine
Sports
Features
Photos
Opinion
Obituaries
e-Edition
Contests
Classifieds
Legals
HD Media
No Thanks
1 of 4 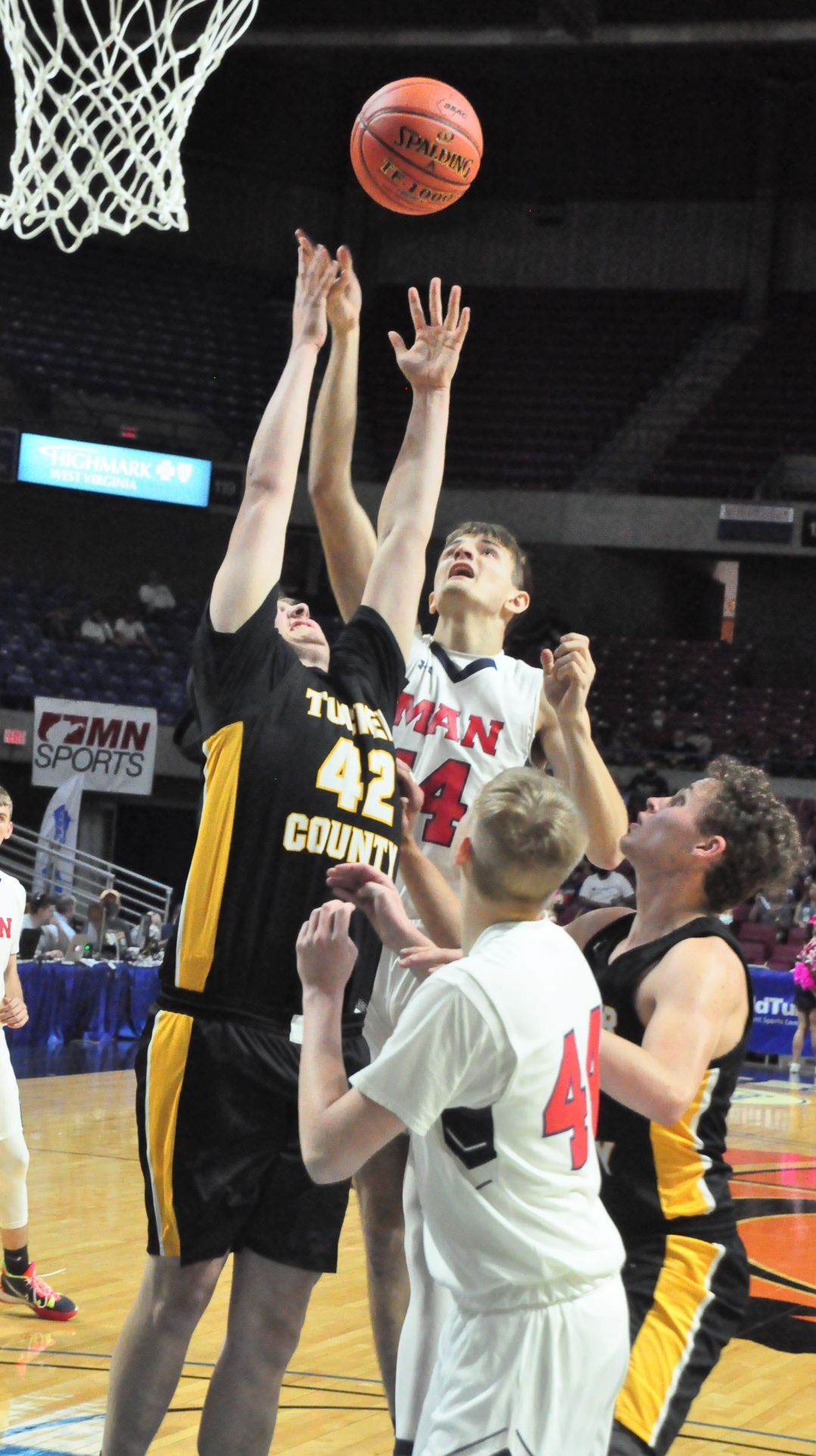 Man’s Austin Ball shoots over Tucker County’s Zach Colebank in the opening round of the Class A boys state basketball tournament on Tuesday, May 4, in Charleston. 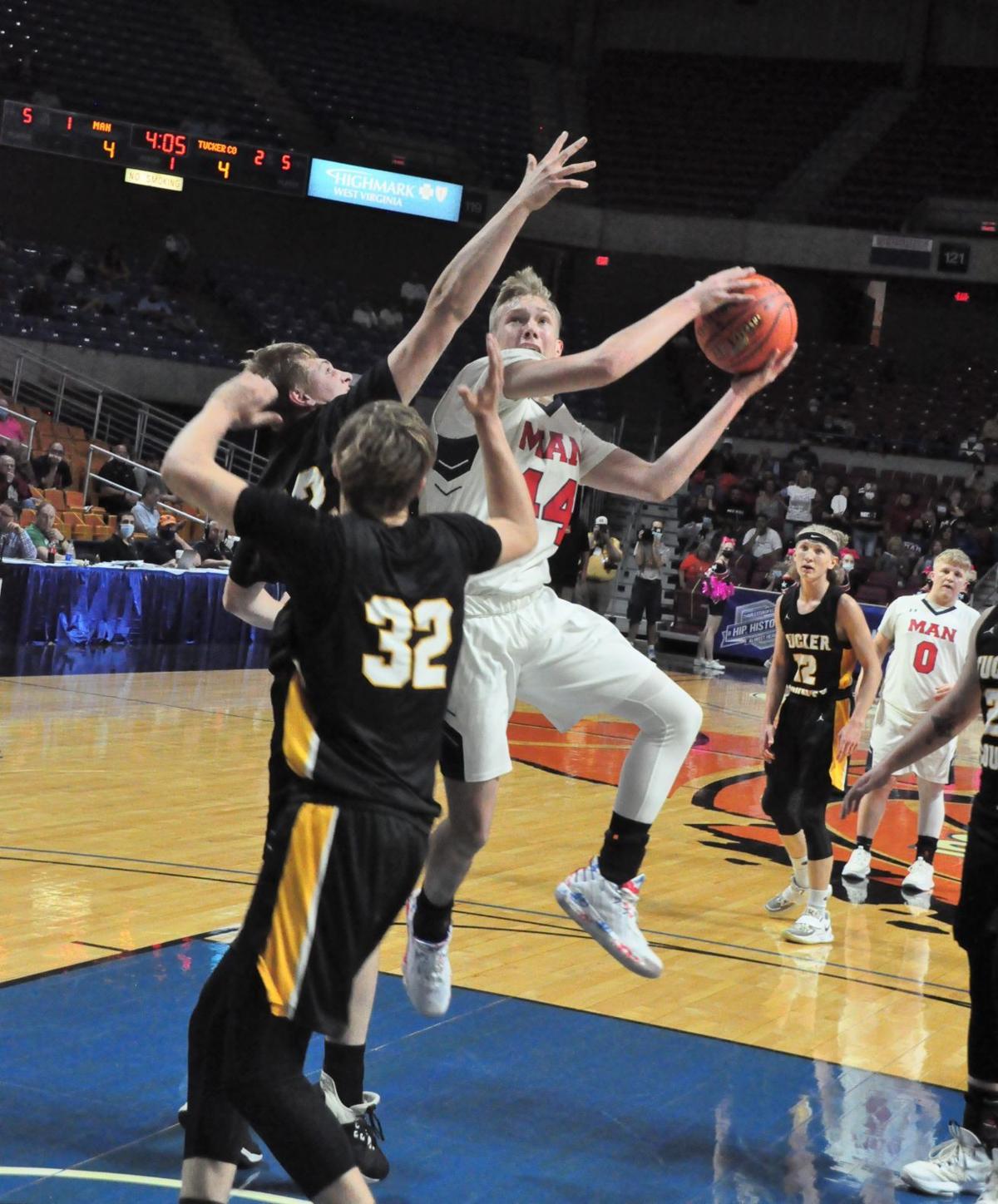 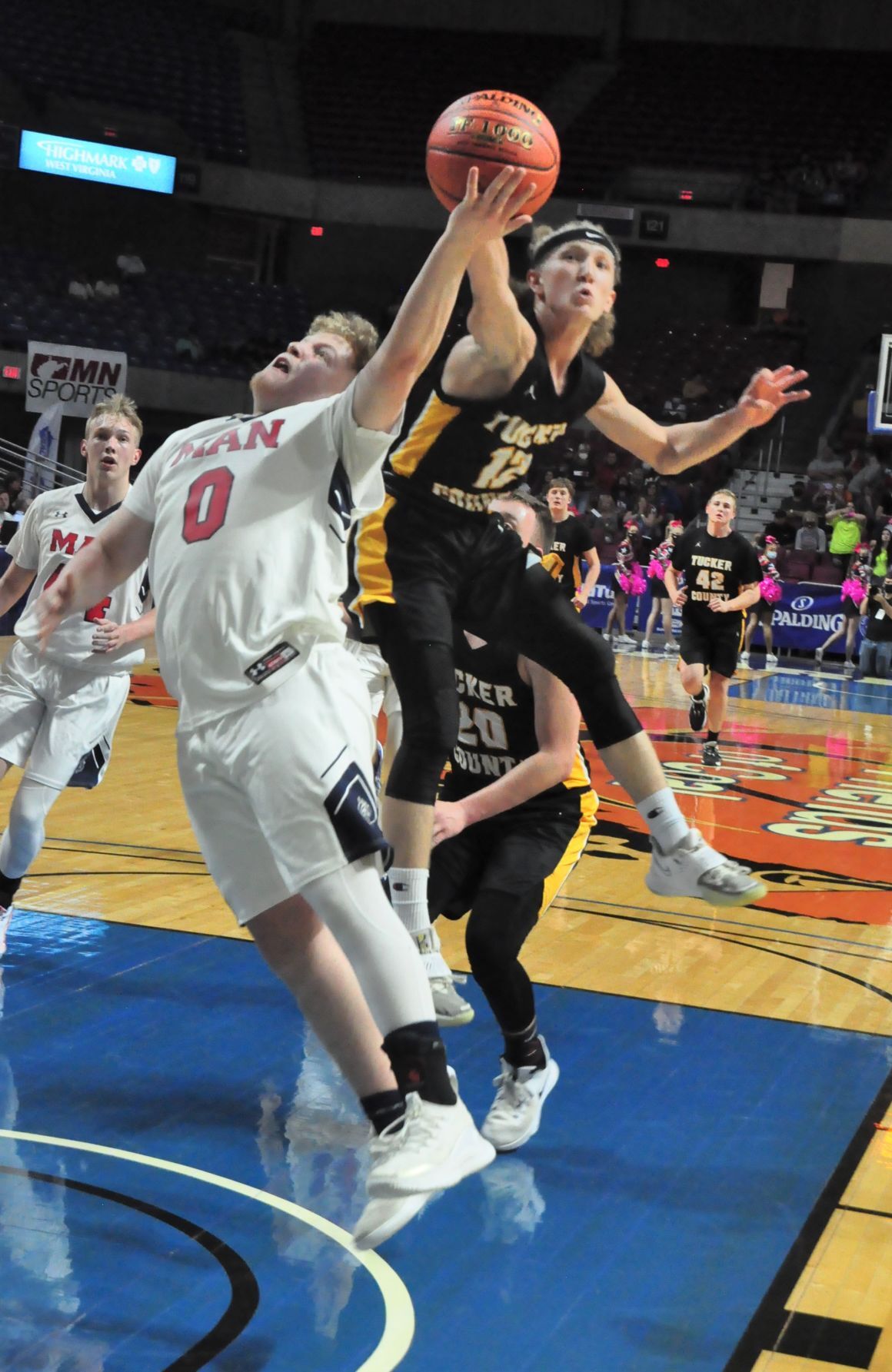 Man’s Austin Ball shoots over Tucker County’s Zach Colebank in the opening round of the Class A boys state basketball tournament on Tuesday, May 4, in Charleston.

CHARLESTON — One down and two to go.

That’s the business-like attitude the No. 1-ranked Man High School boys’ basketball team is taking after the top-seeded Hillbillies thrashed No. 8 seed Tucker County, 74-34, on Tuesday evening during one of the four Class A quarterfinals at the Charleston Coliseum.

Man (14-2), the Single-A tourney favorites, move on to play either Clay-Battelle or Webster County on Thursday at 7:15 p.m. for the right to play in Saturday morning’s state finals. Webster is the reigning 2019 Single-A state champs since last season was shut down due to the COVID-19 pandemic.

Tucker County saw its season come to a close at 12-6.

Man, making its first trip to the state tournament in nine years and seventh overall appearance, is searching for its first ever state championship in boys’ basketball.

It’s also the first win by the Hillbillies in the state tourney since 1998 when Man downed Grafton, 73-58, in the Class AA state quarterfinals before taking a semifinal exit at the hands of Tucker County.

Man coach T.J. Blevins said he’s proud of what his team has done, steadily improving from an 0-22 winless season five years ago to being the team to beat in Class A.

“We take a lot of pride back home. We have a great community that backs us,” Blevins said. “I’ve always said that the town of Man is as big as it’s spelled. We have a small town. There’s something special being from Man and doing what we are doing right now. We executed very well in the second half but I didn’t like how we played in the first half. So I challenged them in the locker room. I will let this slide with this the big lights and the nervousness. We were looking at our kids in the locker room and they were in a daze. I’m glad that it’s out of the way.”

Man’s 6-foot-7 junior center Austin Ball had a monster game, with double-double numbers of 27 points and 13 rebounds. He also had three blocks, three steals, three assists an a slam dunk, which gave him 1,000 points for his career.

Adams started it off with a 3-pointer. Ball later scored an easy two on a lay-in and added a putback as the lead swelled to 46-21 with 4:44 to go in the third quarter.

The lead continued to grow.

Ball added a three-point play with 1:15 left and drove in strong for a one-handed scoop in the lane as Man led 61-27 with 49 ticks to go.

Toler’s 3-pointer from the corner at the buzzer gave the Billies a 64-27 lead after three.

Man then coasted in the four quarter, emptying its bench.

“What you saw in the first quarter is what we are used to seeing in every quarter,” Coach Blevins said.

The Hillbillies had started out slowly against Tucker County, trailing briefly early on, then taking a 14-10 lead after a sluggish first quarter.

Man then went on a second quarter run, climaxed by a rim-rocking two-handed slam dunk by Ball, which gave the Billies 30-18 lead with 2:08 to go until halftime.

Man started off the frame with a 7-1 run to grab a 21-13 lead. Toler came off the bench to connect on a corner 3 and also added a lay-in during the run.

Later on, Adams completed an old-fashioned three-point play with 4:17 remaining in the first half, giving the Billies a 24-14 lead, their largest up until that point.

Adams put the Billies on top by 12 at the half, after sinking a pair of free throws with 22.1 ticks to go.

Tucker County out-rebounded Man 53-45 and only turned the ball over six times to 17 for the Billies.

Man outscored the Mountain Lions 42-16 in the paint and tallied a 24-6 edge in points off turnovers.

Tucker County coach Daniel Helmick said his team was able to hold on for awhile but it was just not enough.

“In the first half we got what we wanted but it kind of snowballed there in the second half,” he said. “Give them credit. They are ranked number one in the state and they are pretty good. We won just four games last year so we are coming along at the right time.”

The furthest the Billies have ever gone was in 1990, as Man knocked off Tolsia (91-84) and Midland Trail (86-80) to advance to the Class AA state championship game where Man was defeated by Wheeling Central (94-68).

Coach Blevins, now in his fifth year, has seen his Billies steadily improve every year. Man was 18-6 last season and bowed out from the Class AA sectionals at the hands of Chapmanville and lost no seniors from that team.

“This is my fifth year and we were 0-22 my first year,” Blevins said. “I don’t like to lose in checkers, so you can imagine how that was.”