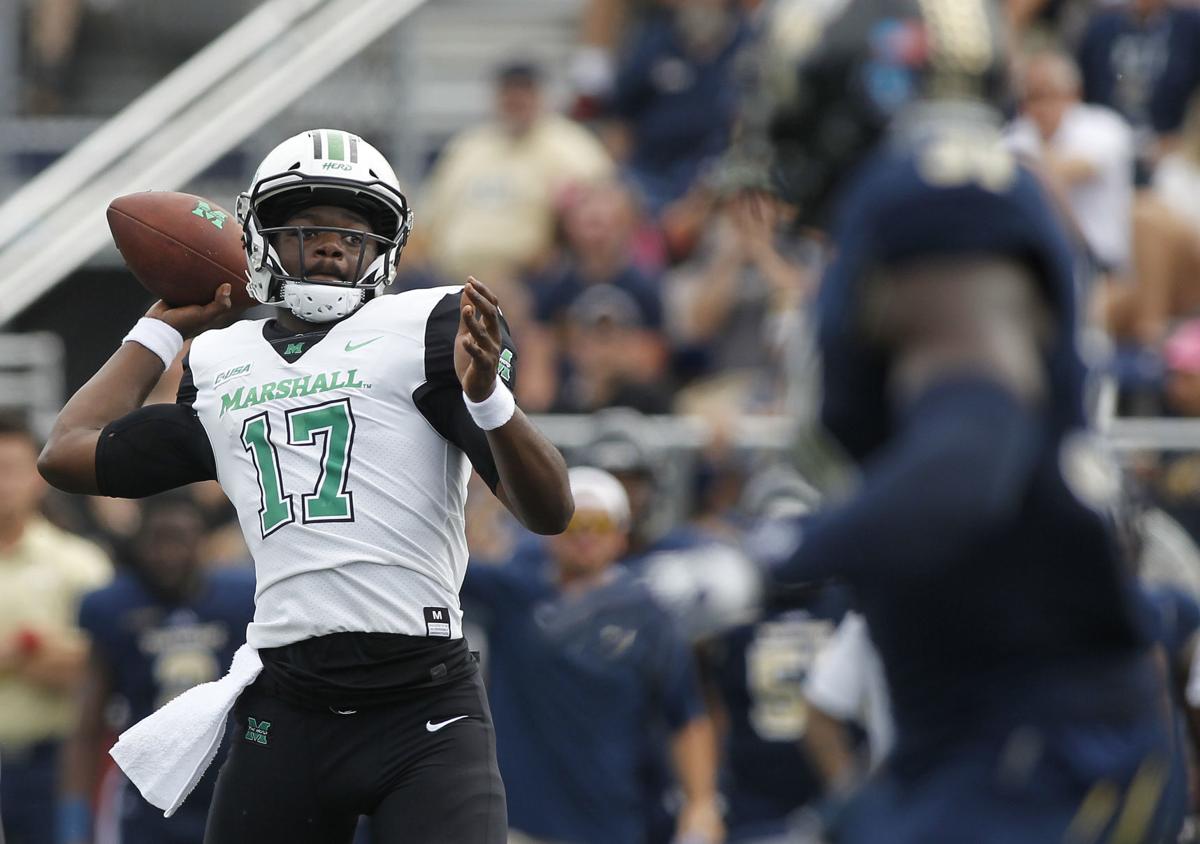 Andrew Innerarity/For The Herald-Dispatch Marshall QB Isaiah Green winds up in the first half against FIU as the Thundering Herd plays the Florida International University Panthers on Saturday, Nov. 24, 2018, in Miami, Fla. 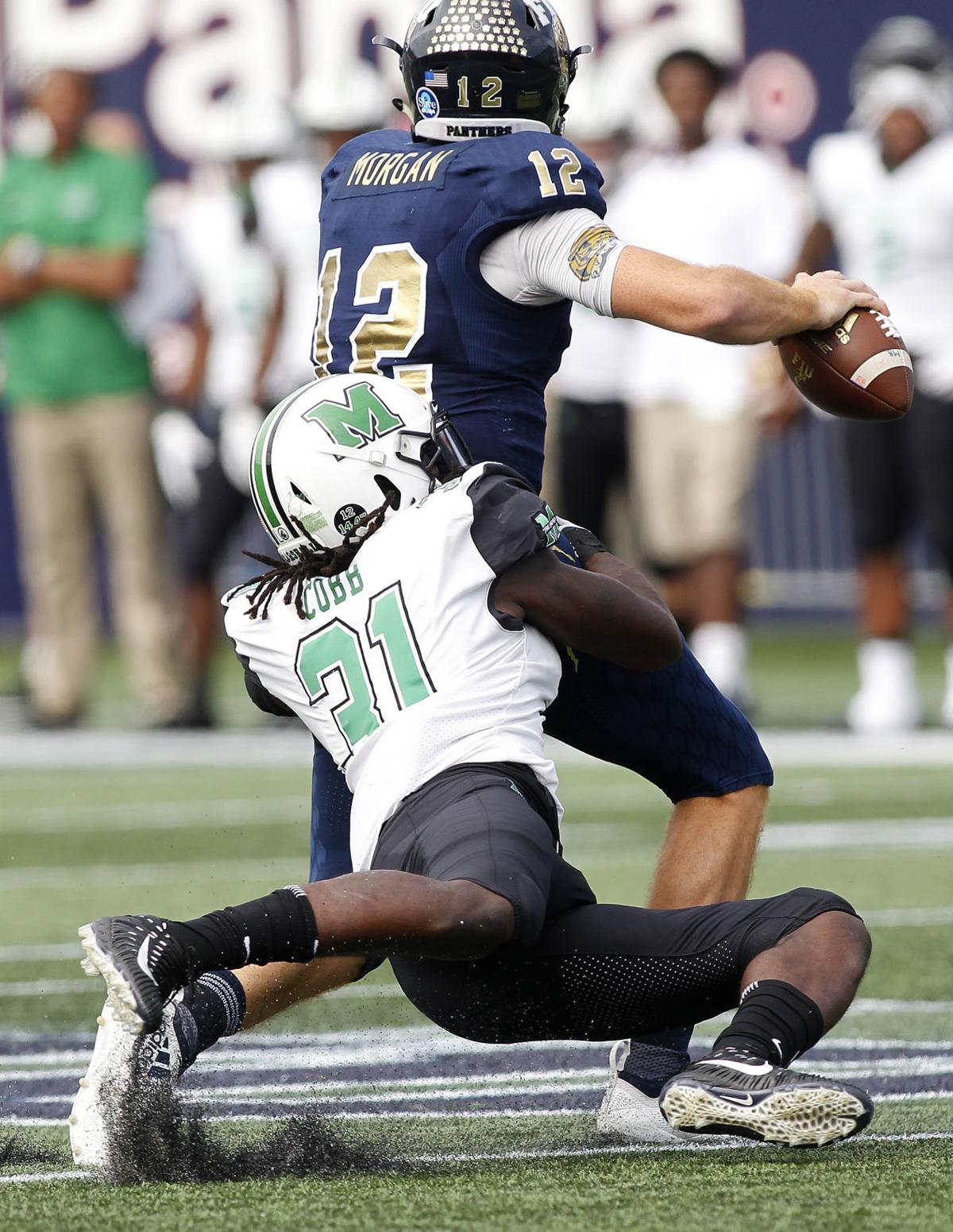 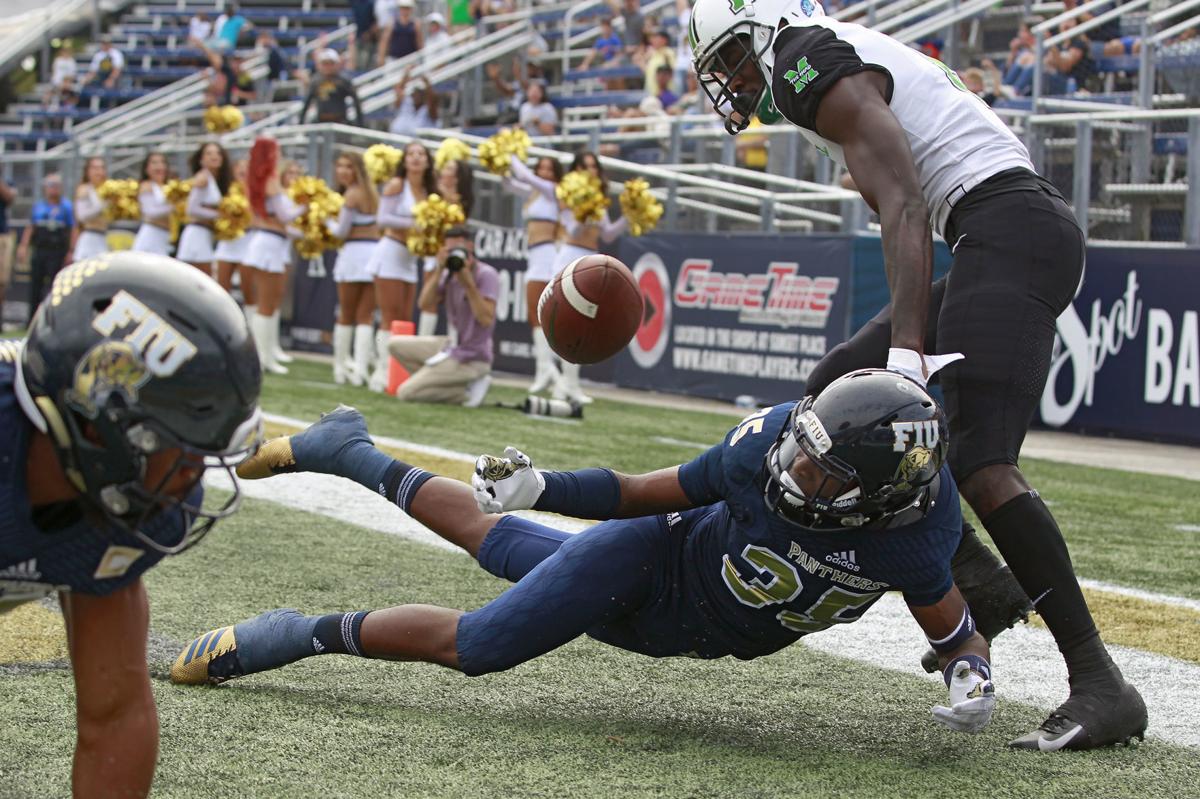 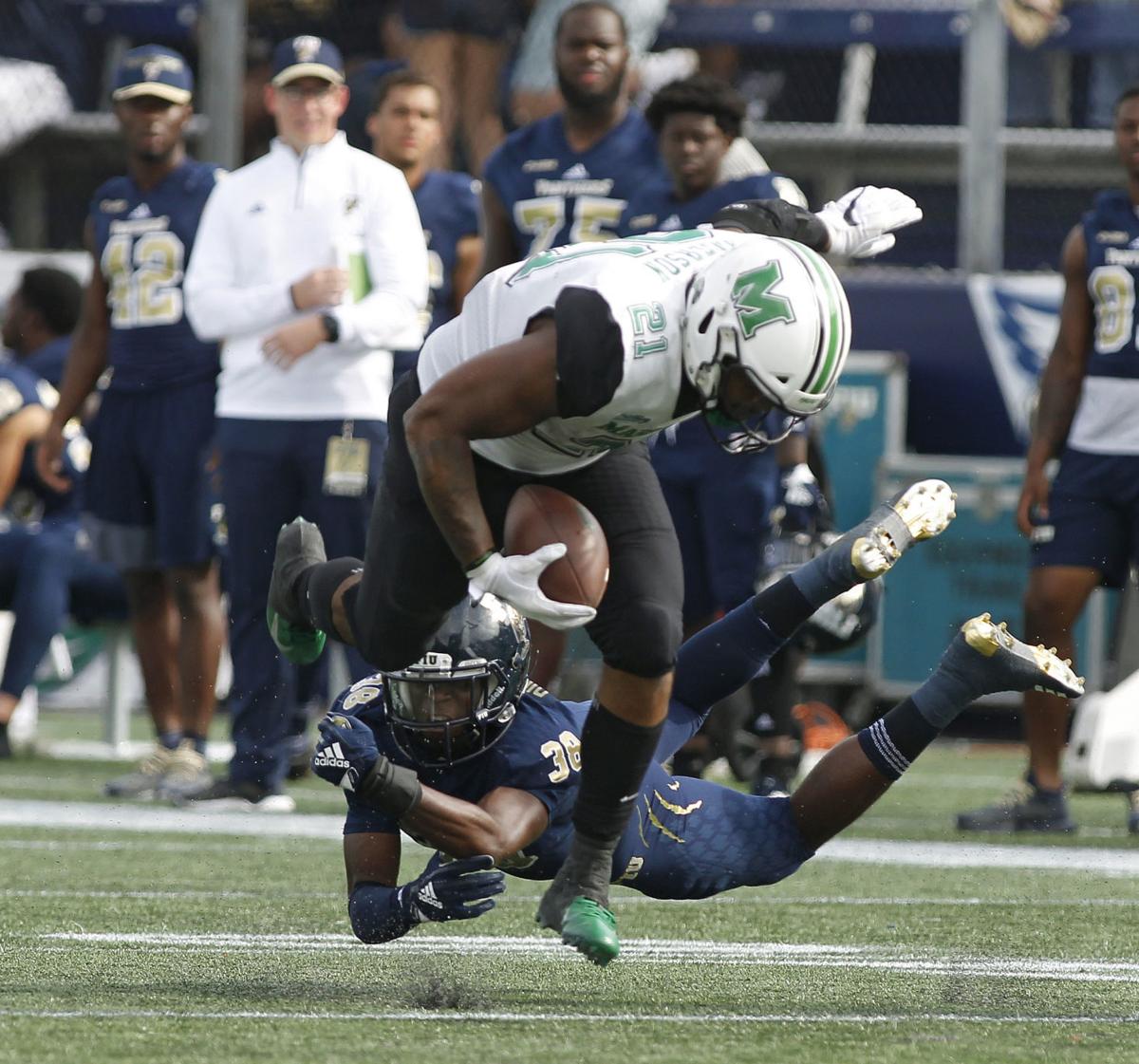 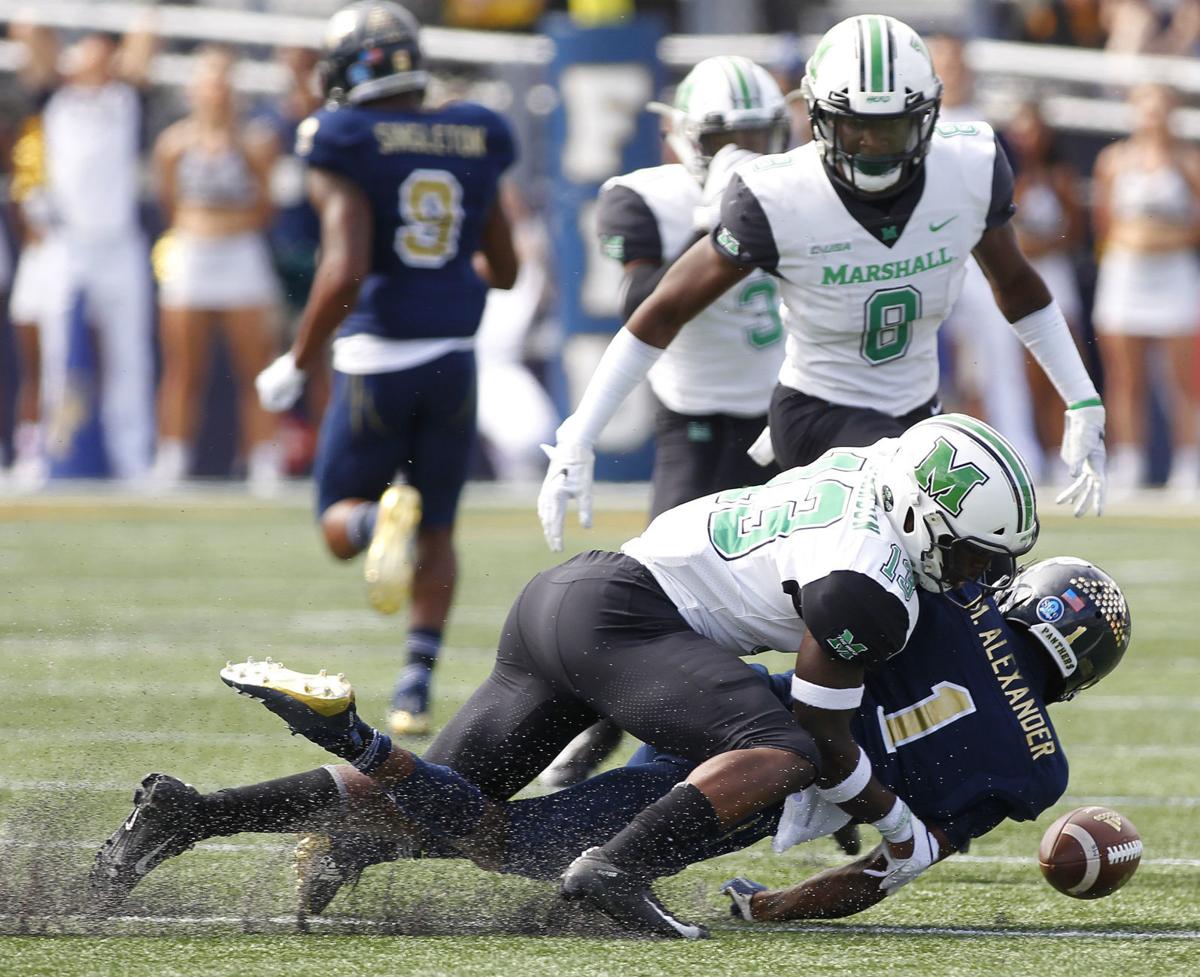 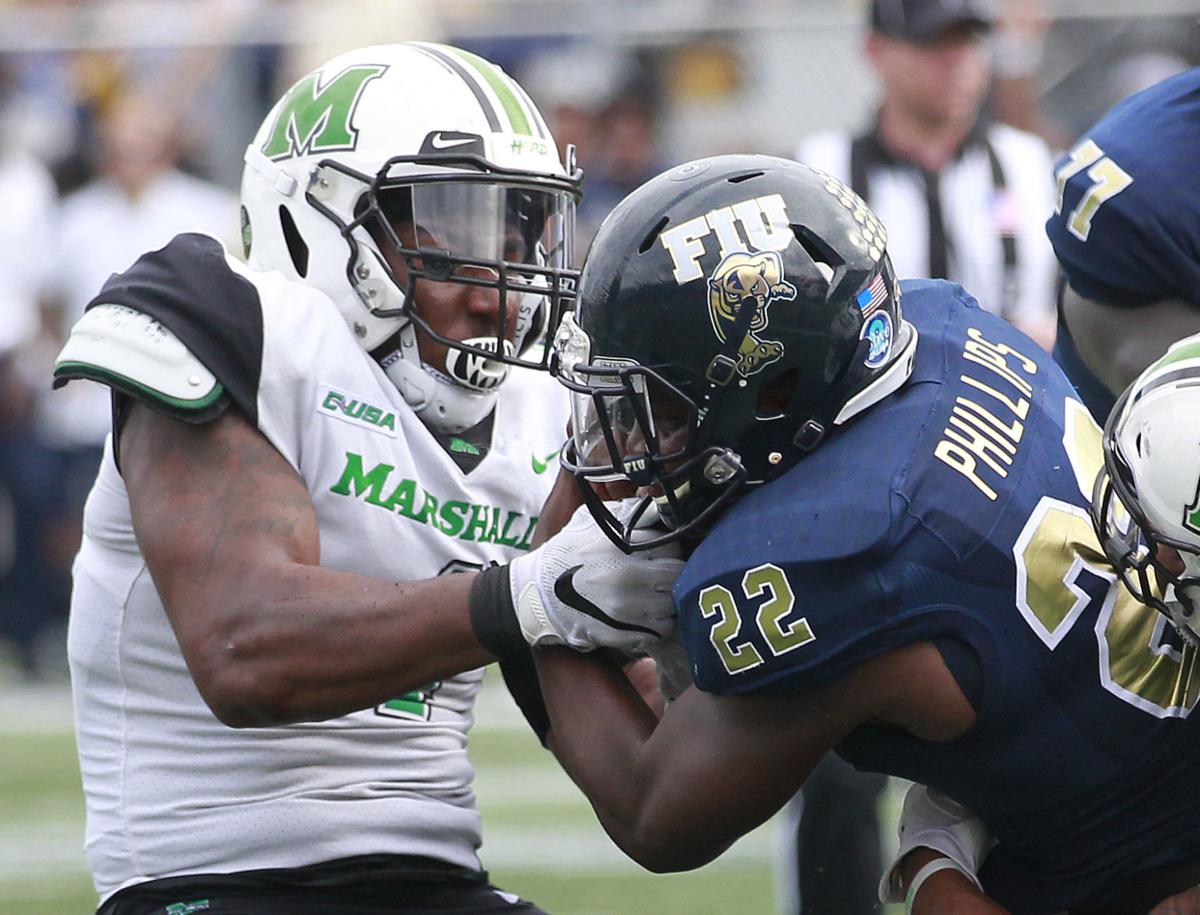 Andrew Innerarity/For The Herald-Dispatch Marshall linebacker Juwon Young tries to strip the ball away from FIU running back Shawndarrius Phillips during a Conference USA football game Saturday, Nov. 24, 2018, in Miami. 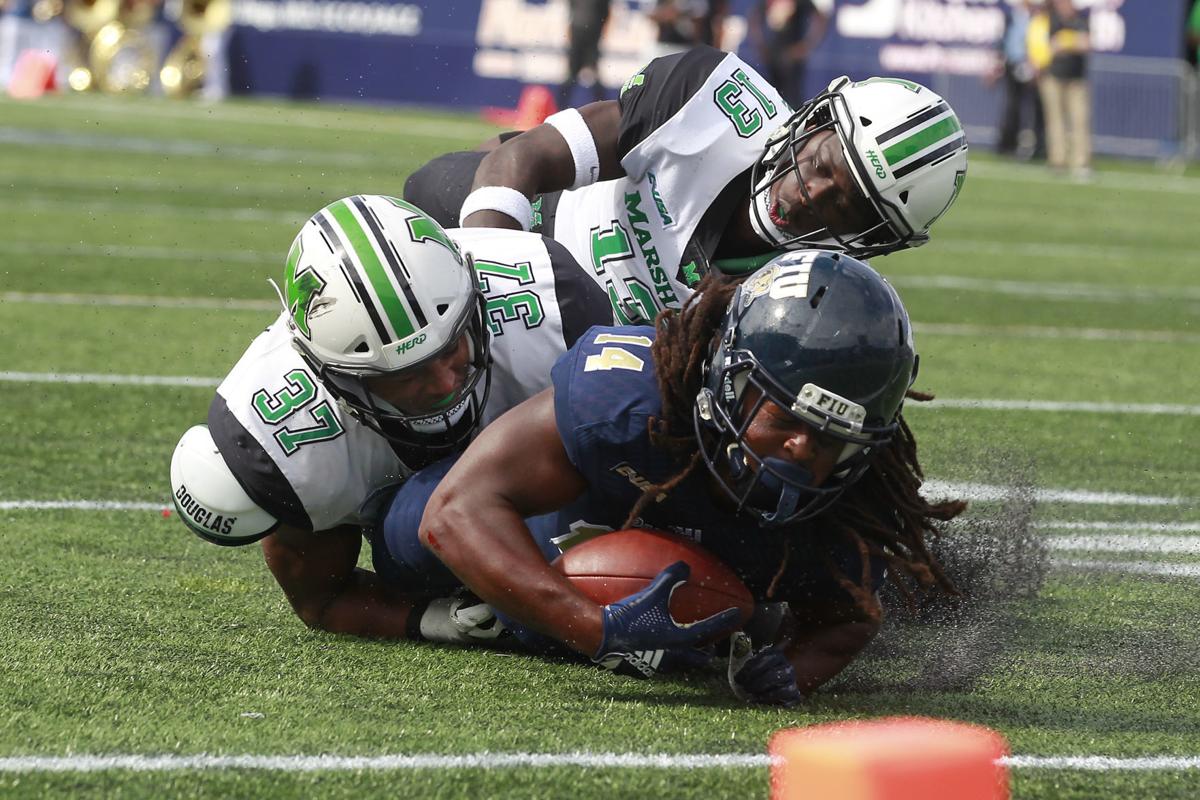 Andrew Innerarity/For The Herald-Dispatch Marshall QB Isaiah Green winds up in the first half against FIU as the Thundering Herd plays the Florida International University Panthers on Saturday, Nov. 24, 2018, in Miami, Fla.

Andrew Innerarity/For The Herald-Dispatch Marshall linebacker Juwon Young tries to strip the ball away from FIU running back Shawndarrius Phillips during a Conference USA football game Saturday, Nov. 24, 2018, in Miami.

EDITOR’S NOTE: This is the ninth installment of series previewing Marshall’s 12 football opponents for the 2020 season. Today, we look at Marshall’s ninth opponent: Florida International.

HUNTINGTON — As FIU looks back at the 2019 season, there is a mix of emotions concerning the year.

The highlight, no doubt, was a 30-24 win over cross-town foe and ACC member Miami that put the Panthers into bowl contention.

However, a blowout loss to Middle Tennessee and disappointing loss to Western Kentucky at home in the C-USA opener dispelled some of that good feeling.

The Panthers finished with a losing record overall after a loss to Arkansas State in the Camellia Bowl and also had a losing record in Conference USA after dropping their final two to Florida Atlantic and Marshall.

As 2020 approaches, the Panthers have plenty of talent for Butch Davis to work with, but that has been the case in each season, honestly.

The team has to replace quarterback James Morgan at quarterback, but Kaylan Wiggins brings a lot of talent as a dual threat to the position, which could make the offense more dangerous.

On Tuesday afternoon, FIU added former Maryland starting quarterback Max Bortenschlager as a grad transfer as well. Bortenschlager, who will have two seasons left, threw for 1,522 yards and 11 touchdowns in nine games over three years.

Surrounding the new quarterback is a solid skill set that includes talented running back D’Vonte Price, who will log more carries in the 2020 season after sharing snaps as part of a trio in 2019.

For the quarterbacks and Price, the offensive line is bolstered by the return of center Shane McGough and left tackle D’Antne Demery, who brings a wealth of experience.

Last season, FIU allowed just 14 sacks on the season, which is a momentum-builder for 2020. However, the new players stepping into the fold have to be ready for an offense that is going to feature a balanced attack.

Wiggins’ set of targets may be as good aas FIU has had with Georgia transfer J.J. Holloman joining a group that featured 700-yard receiver Shemar Thornton and former starter Bryce Singleton, who is working his way back after missing last season.

If Wiggins can continue to move the offense, the defense has the pieces to be solid enough for FIU to contend within the East Division.

The defensive front is talented with several pieces returning. Alexy Jean-Baptiste is a guy who catches the eye on the edge with Kevin Oliver and Chris Whittaker also providing experience. The interior will see Andrew Tarver and Noah Curtis try to wreak havoc to open the path for linebackers to make plays.

At linebacker, Jamal Gates leads the way after an 85-tackle season last year. Joining him is Boise State transfer Tyson Maeva, who brings experience and a knowledge of how to win after his time with the Broncos.

The back-end of the defense is solid with twins Rishard and Richard Dames leading the way.

Richard Dames is joined at safety by Dorian Hall, which helps the Panthers put together one of the better safety tandems in the league.

Rishard Dames leads a cornerback group that has talented with guys like Josh Turner, but some guys will have to grow up quickly to strengthen the pass defense.

On special teams, there is a critical battle that will ensue at kicker after the transfer of three-year starter Jose Borregales.

Chase Gabriel is an incoming freshman who could win the job, but punter Tommy Heatherly has game experience and has been working to add kicker duties to his resume.

The schedule is not an easy one for the Panthers as they make the quarterback transition, either. After a season-opening home game against Jacksonville State, FIU is on the road for five of its next six games. The second home game of the year is a Halloween battle with Marshall, which could be a big East Division matchup.

If FIU is to improve on last year’s mediocrity, the Panthers have to win on the road early and build some momentum.

The talent is there to contend, but whether the Panthers take that next step or not remains to be seen.