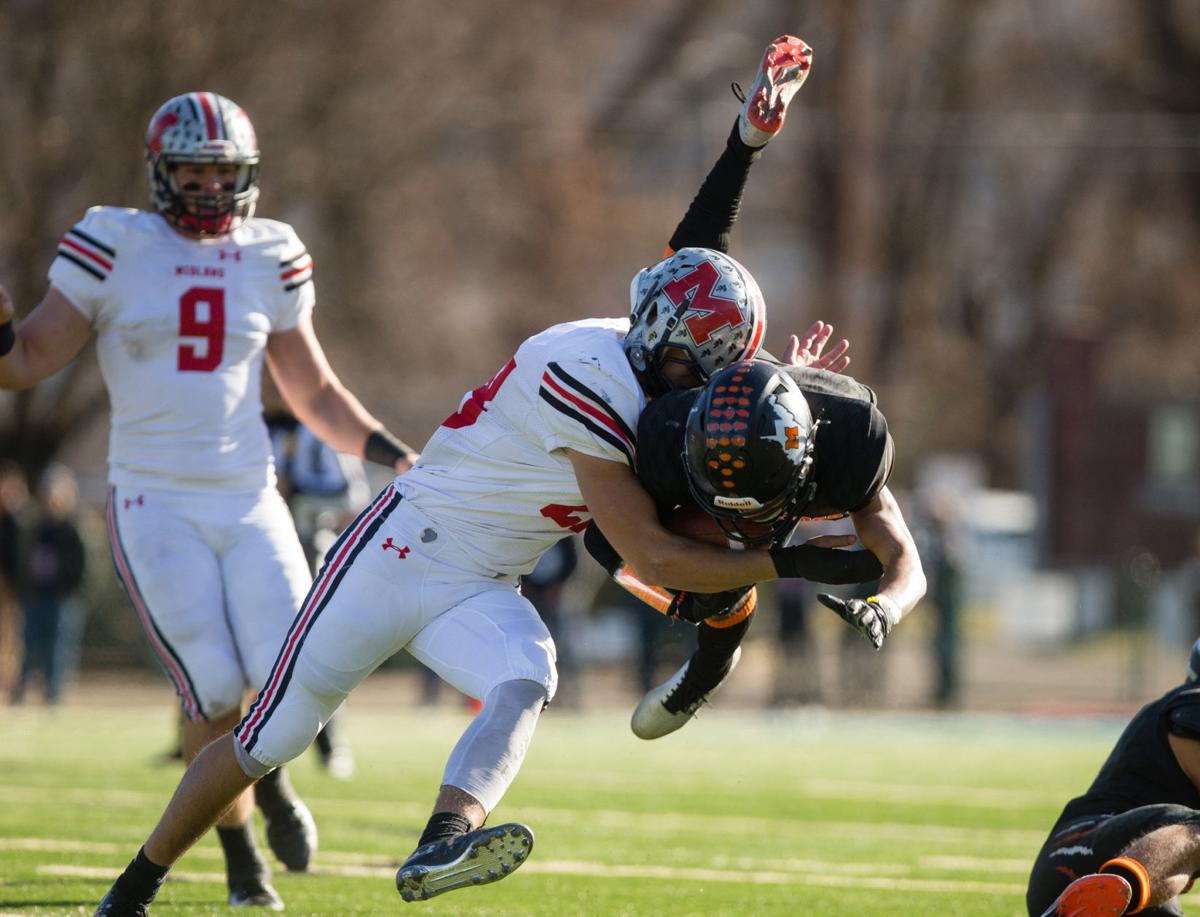 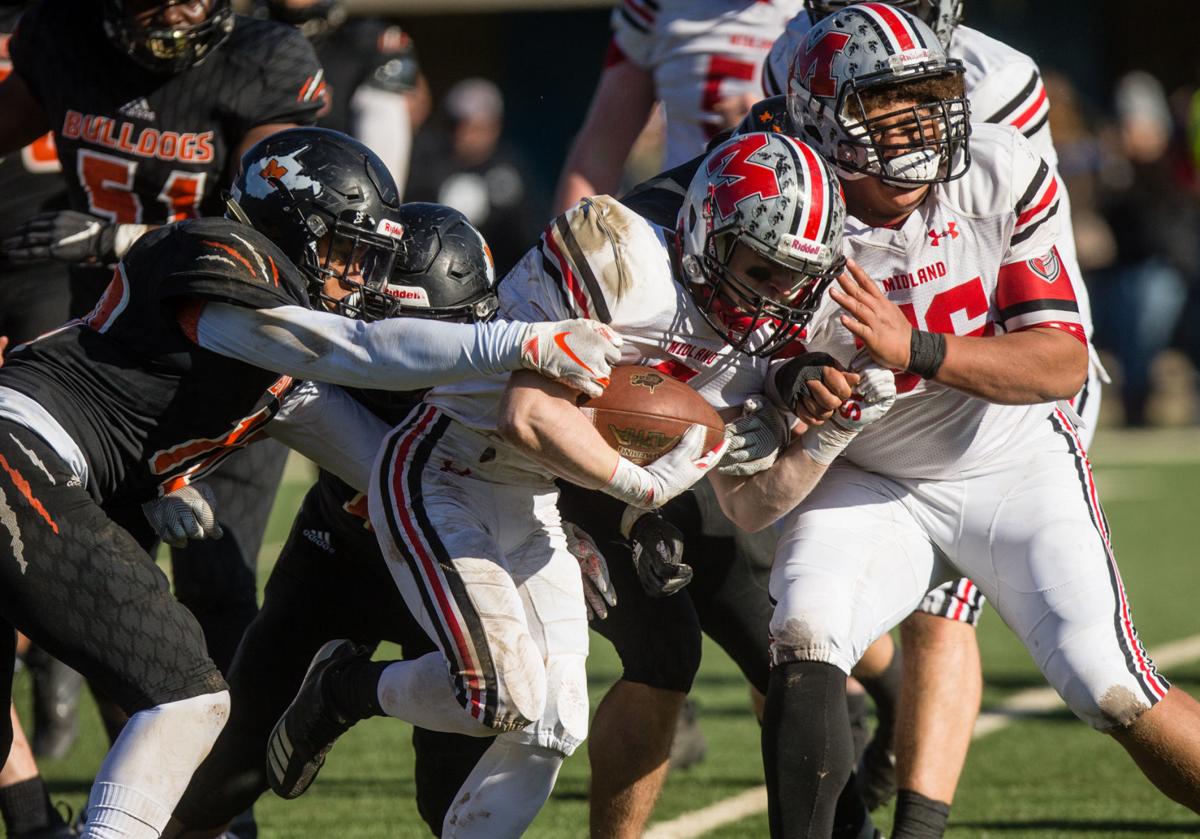 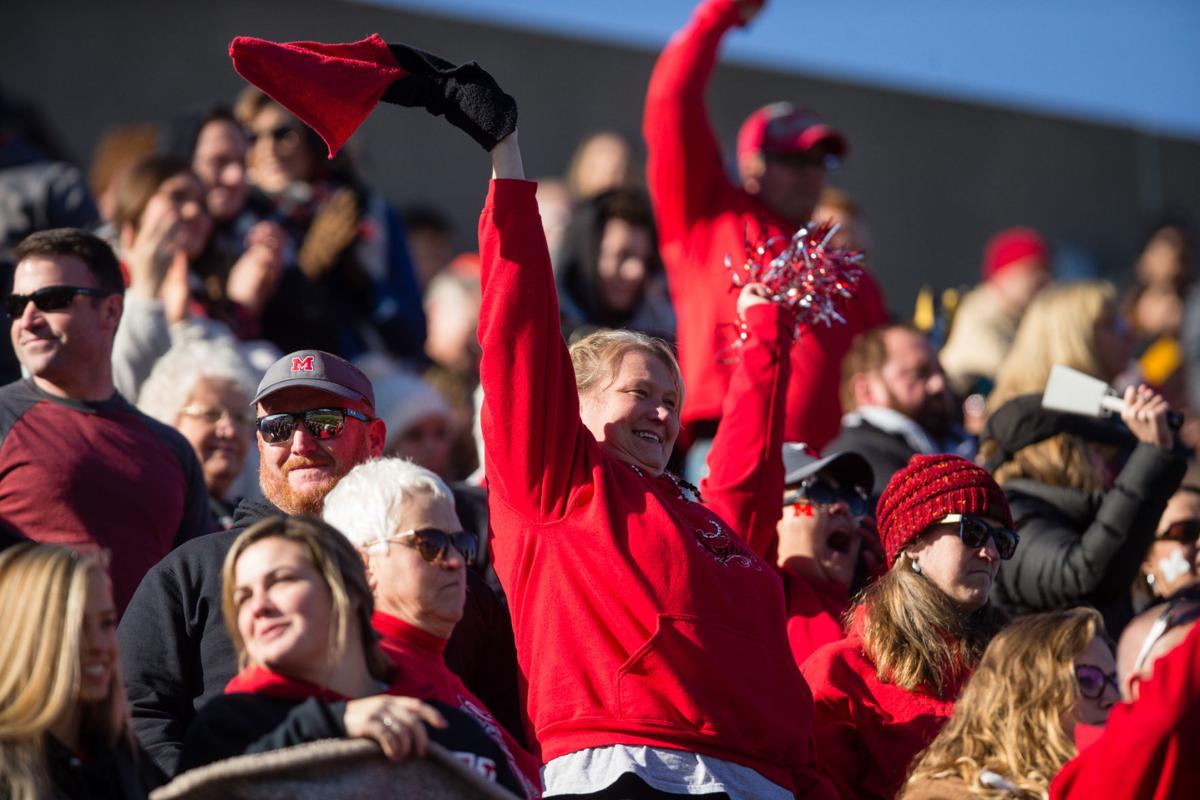 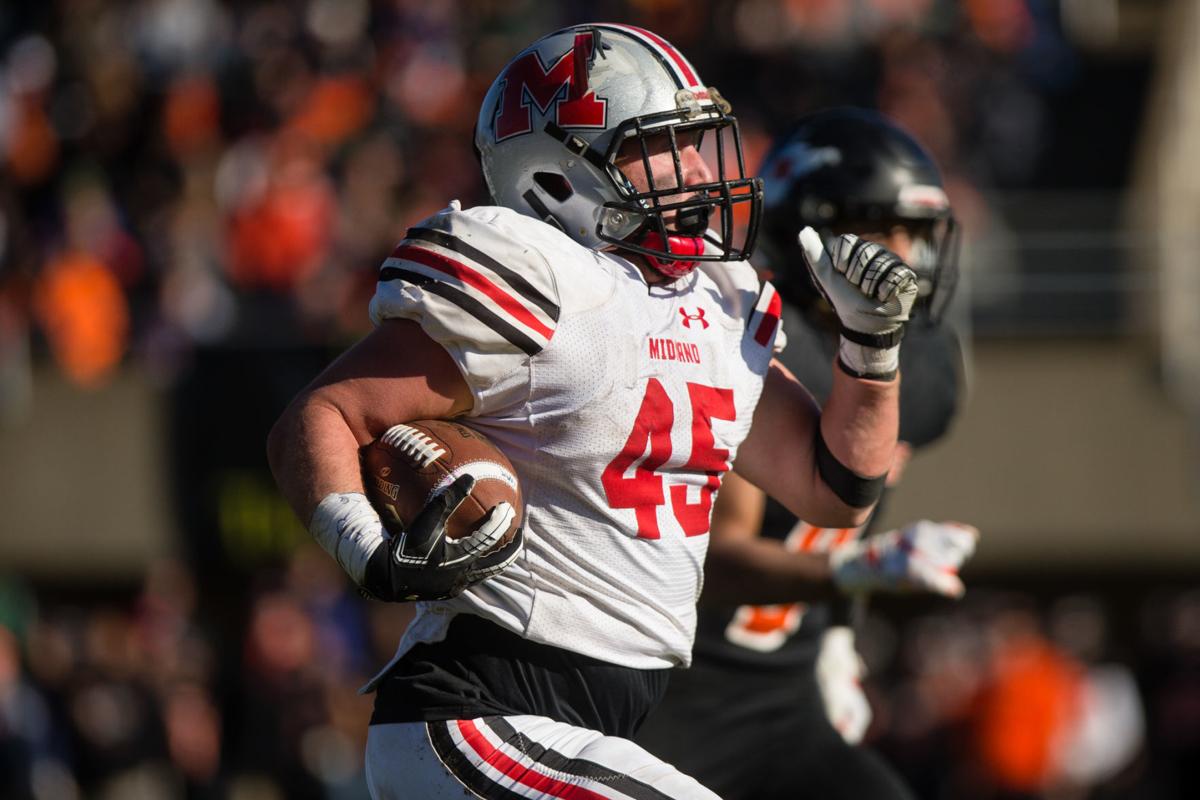 WHEELING — Cabell Midland was able to survive one of Martinsburg’s patented barrages on Saturday, but the second one did in the Knights for good.

Elijah Banks threw five touchdown passes and the Bulldogs racked up five touchdowns in the final 3:16 of the first half, carrying them to their fourth straight Class AAA championship with a 49-21 victory in a battle of unbeaten teams at Wheeling Island Stadium.

Martinsburg, the No. 1 seed, also won four titles in a row from 2010-13, but this time pulled it off without losing a game all four seasons, extending its state-record winning streak to 56 straight games.

All-State receiver Jarod Bowie caught three of the touchdown passes from Banks, who was selected as Martinsburg’s MVP in a media vote. Bowie also returned the opening kickoff 77 yards to set up a score and broke off a 75-yard punt return TD that was negated by penalty.

Martinsburg jumped on top 14-0 after just 26 seconds of play, scoring on Naieem Kearney’s 9-yard run after Bowie’s kickoff return, then falling on the ball at the Midland 14 after three Knights return men watched a live ball bounce near the sideline. On the next play, Banks hit Bowie for a score.

That surge was nothing new for the Bulldogs, who seem to score in waves — especially on special teams — and were outpointing opponents 62-8 on average this season. Unlike most other teams, however, No. 2 seed Midland (13-1) was able to recover from that shock and get back in the game.

Fullback Jakob Caudill kept pounding out chunk gains on the ground in Midland’s option offense and quarterback J.J. Roberts tallied twice on short runs to bring the Knights into a 14-all tie with 4:45 left until halftime. That’s when the roof really fell in on Midland.

Kevon Warren scored on an 8-yard run to put Martinsburg up 21-14 with 3:17 left in the half and Midland shanked its next punt, which went for just 8 yards, giving the Bulldogs the ball at the Knights 35. Three plays later, Banks rolled right, threw across his body and found Malakai Brown for a TD and it was 28-14.

Anthony Smith recovered a fumbled kickoff return at the Midland 25 and Banks threw to Bowie on the next snap for a TD. The ensuing kickoff took an odd bounce, Kai Walker fell on it for Martinsburg at the 25, and Banks hit Teddy Marshall with a first-play TD. Midland again fumbled a kickoff return and four plays after, Banks passed to Bowie for a score.

That’s two fumbled kickoff returns, failure to cover another and an 8-yard punt all in the span of less than 60 seconds of game time, leading to the Martinsburg spree.

“It’s a third of the game,’’ Walker said, giving kudos to special teams coach Britt Sherman. “We spend a good bit of time on it, a lot of directional kicks and things we try to do. The ball bounced our way a few times, and you’ve got to have that.’’

Leading 49-14 at halftime, Martinsburg looked like it would threaten the Class AAA record of 69 points put up by J.R. House and Nitro in their 69-52 win against Morgantown in the 1998 finals. It didn’t happen, but it did create a running clock in the fourth quarter, a title-game rarity.

Midland got one score back in the fourth quarter when Roberts cashed in a 36-yard run. A Wake Forest commit as a defensive back, Roberts finished with 106 yards on 16 carries. Caudill was voted his team’s MVP for a 31-carry, 164-yard effort.

“To be honest, we played really good at times,’’ said Midland coach Luke Salmons, who led his team to the Mountain State Athletic Conference title. “We had sustaining long drives and the kids executed well our game plan. Hats off to (Martinsburg). They had that span … and it was just tough.

“They’ve got really good kids. They’re big and athletic and fast and well-coached, and they execute. You’ve got that in the mix and good things happen. But proud of our kids. Had a great season. Being second sucks, but proud of what we’ve done.’’

Banks, who threw for 187 yards with no sacks and one interception, wasn’t shocked that his team jumped out to a large lead early, and then put on an unforgettable flurry near the end of the half. He’s seen it many times before.

“It’s amazing that we have athletes all around the field,’’ he said, “like Jarod and Malakai and Teddy and Naieem, Kevon, Anthony. It’s just amazing. You can’t key on just one person or we’ll get you with another.

“We definitely take (opponents) by surprise. I feel like we start the game right, get the tempo and then after that, it’s ours.’’

Martinsburg gets the chance to break its own record next season for consecutive Class AAA titles, seeking a fifth straight.

“It’s become the norm,’’ Walker said. “You want to be successful, you want to expect success, but also I think sometimes … well, they expected this back in August. I don’t think they thought there was going to be any doubt they would win a state championship. I wasn’t quite thinking that, but they were.’’

WHEELING - It took Cabell Midland 16 minutes to rally after spotting Martinsburg a 14-point lead. All that effort was eliminated with one 35-point surge in just over three minutes of the Bulldogs' 49-21 win over the Knights.