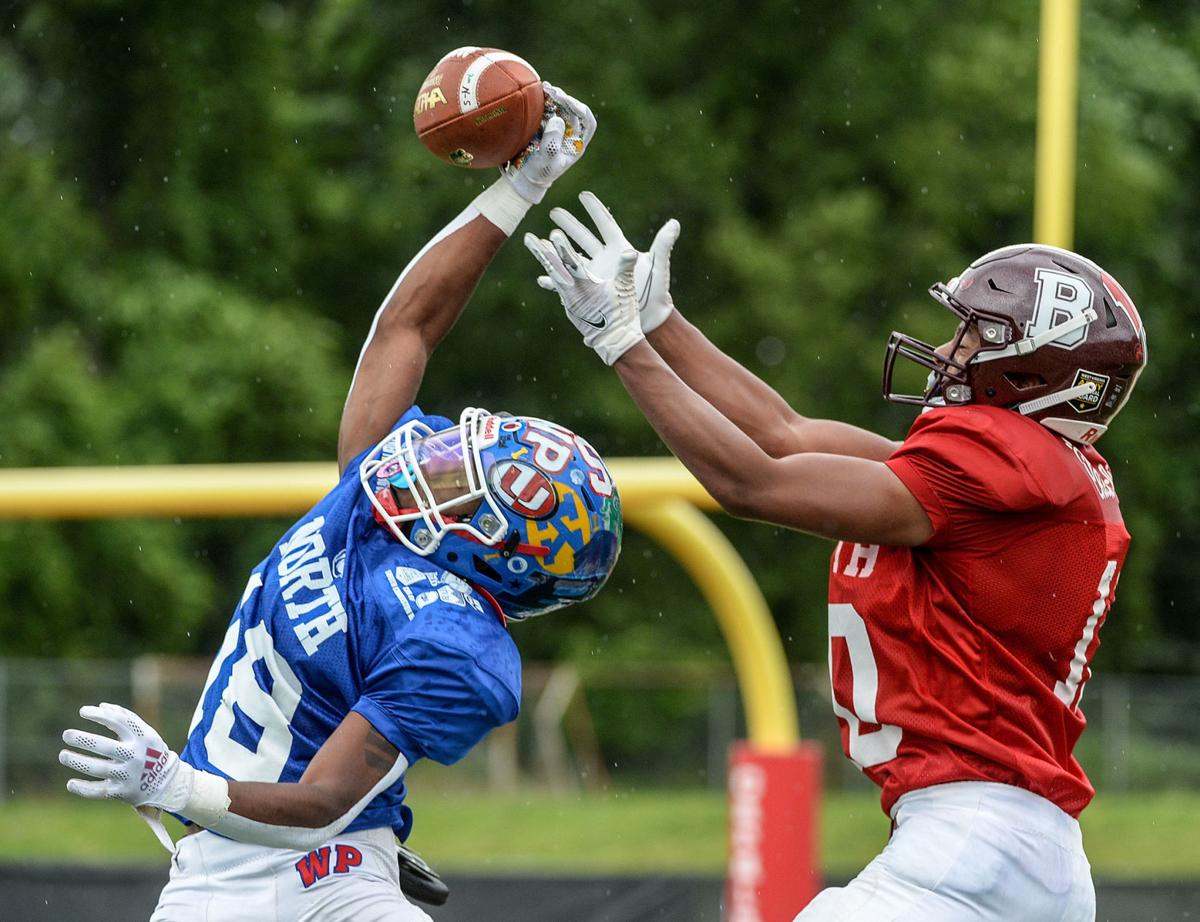 The North’s Shaheed Jackson of Wheeling Park (left) breaks up a pass intended for South’s Jace Colucci of Woodrow Wilson during the North-South game Saturday at South Charleston High School. 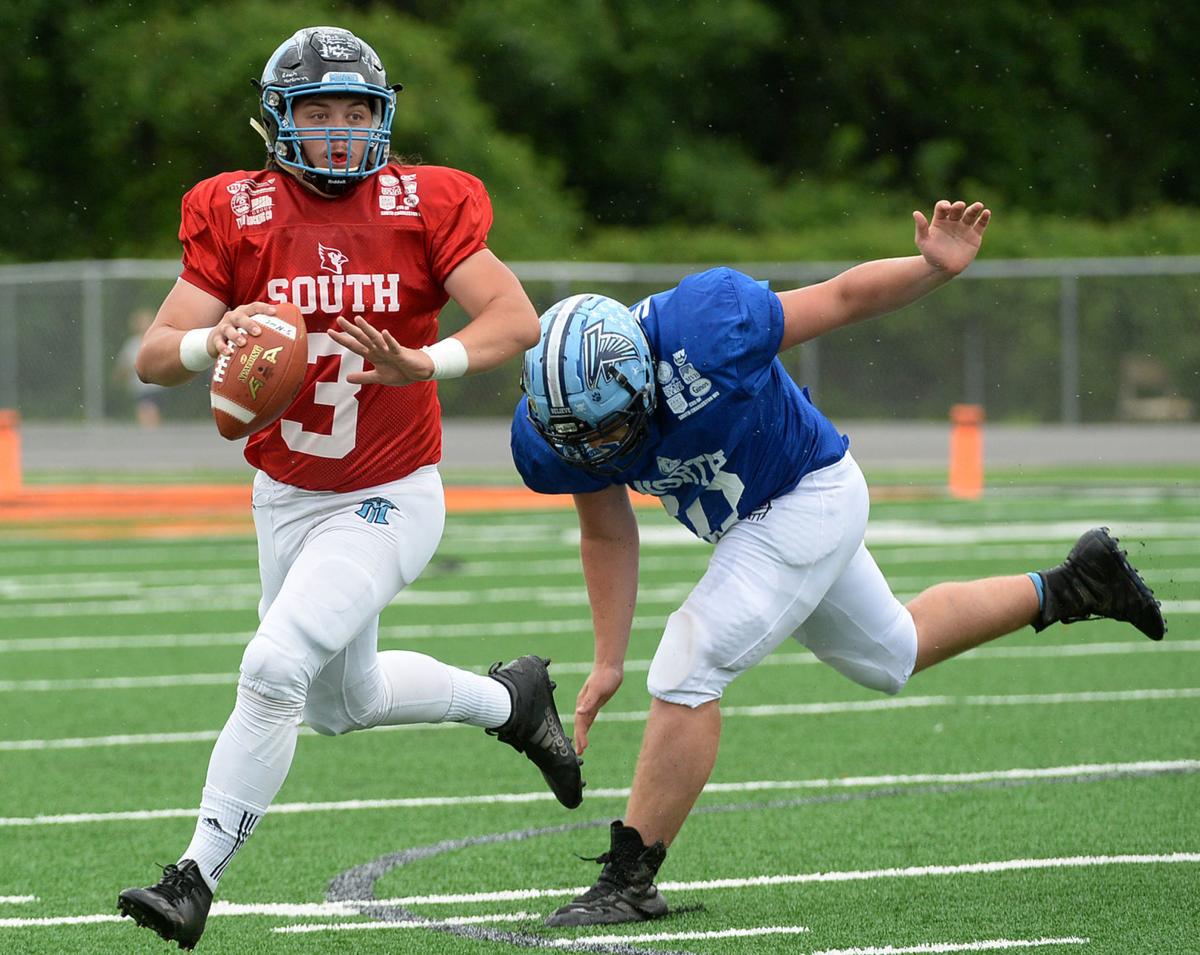 South quarterback Daylin Goad of Mingo Central looks to pass as he is chased by North’s Brock Robinette of Frankfort.

The North’s Shaheed Jackson of Wheeling Park (left) breaks up a pass intended for South’s Jace Colucci of Woodrow Wilson during the North-South game Saturday at South Charleston High School.

South quarterback Daylin Goad of Mingo Central looks to pass as he is chased by North’s Brock Robinette of Frankfort.

SOUTH CHARLETON -- When the highlight of the game is a broken play, that’s a sign a team suffered through a long day.

That was the case with the South Cardinals in a 26-0 loss to the North Bears in the North-South All-Star Football Classic Saturday at South Charleston High School.

Spring Valley tight end Zane Brumfield made a terrific catch off a tipped pass on the third play of the South’s second drive. Mingo Central quarterback Dylan Goad’s throw bounced off the hands of Greenbrier East running back Nate Baker, and Brumfield snagged it for first down at the Cardinals’ 45-yard line.

“It was just there,” Brumfield said of the ball. “I just caught it as if it were thrown to me.”

That drive and nine others for the South stalled, however, as the Cardinals gained just 174 total yards — 88 rushing on 34 attempts and 86 passing on 11 receptions. Brumfield’s catch and a 19-yard reception by Greenbrier East’s Colby Piner were the biggest gains of the day for the South, which mustered just five plays of 10 or more yards.

The North controlled the game from the outset, scoring on its fifth play, a 43-yard scamper by Spring Mills quarterback Keon Padmore-Johnson, the Bears’ most valuable player. Padmore-Johnson ran for 60 yards and two touchdowns on 12 carries and completed 6 of 12 passes for 88 yards and one touchdown.

Padmore-Johnson scored again on the North’s seventh play, a 10-yard skirting of left end for a 13-0 lead. That TD was set up by a 41-yard run by Martinsburg’s Kevon Warren, who gained 97 yards on 11 carries.

The Bears set the final score when D.J. Devinney of Doddridge County kicked an extra point following a 42-yard touchdown pass from Padmore-Johnson to John Marshall’s Dalton Flowers with 9:35 remaining in the game.

“The line blocked really good and the receivers got open,” Padmore-Johnson said. “It felt good to play on the same team with some guys who have always been on the opposite teams. It was a lot of fun.”

South MVP Caleb Jantuah of Richwood said he, too, enjoyed the game, but especially the week of practice. Jantuah completed 6 of 15 passes for 42 yards and ran 11 times for 28 yards.

“At first I was a little nervous,” Jantuah said. “As the week went on, I developed friendships. The game was fun. We hit a couple of plays, but just couldn’t put it in the end zone.”

Jantuah was involved in a double pass that Brennan Boron of St. Marys intercepted in the first quarter. That was the third of three trick plays that misfired early for the South, which was unsuccessful on an onside kick to begin the game and on a fake punt to end its first possession.

Hurricane linebacker Tyrone Washington provided a highlight for the South defense when he delivered a big hit on Padmore-Johnson for a 4-yard loss early in the second quarter. Winfield linebacker John Covert made a game-high two tackles for losses, including a 13-yard sack.

“That felt good,” Washington said, with a laugh.