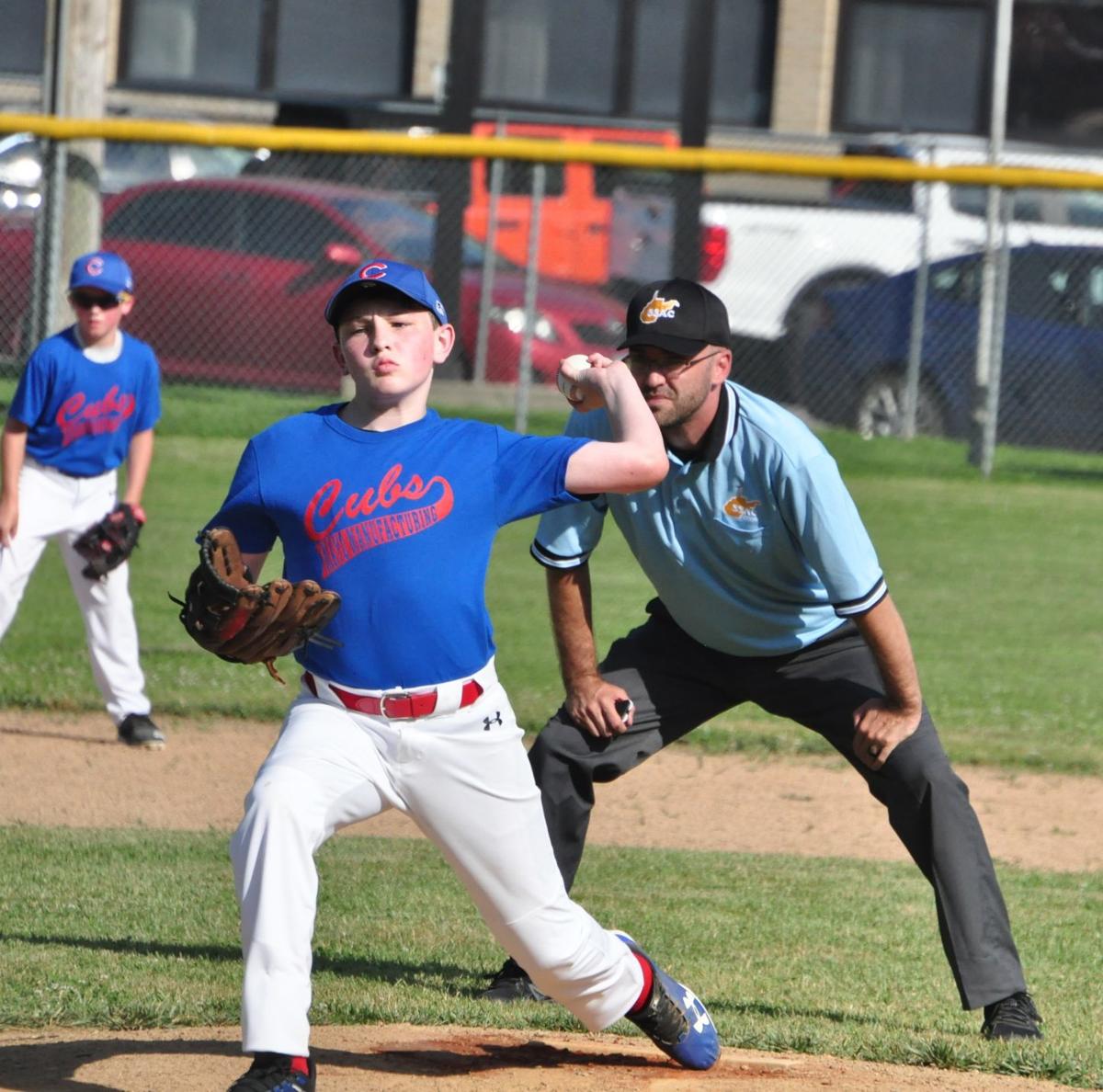 Cubs’ pitcher Hunter Woodrum fires one to the plate in Monday’s Logan Little League Opening Day game against the Reds. The league is playing an abbreviated schedule this summer in the wake of the COVID-19 crisis. 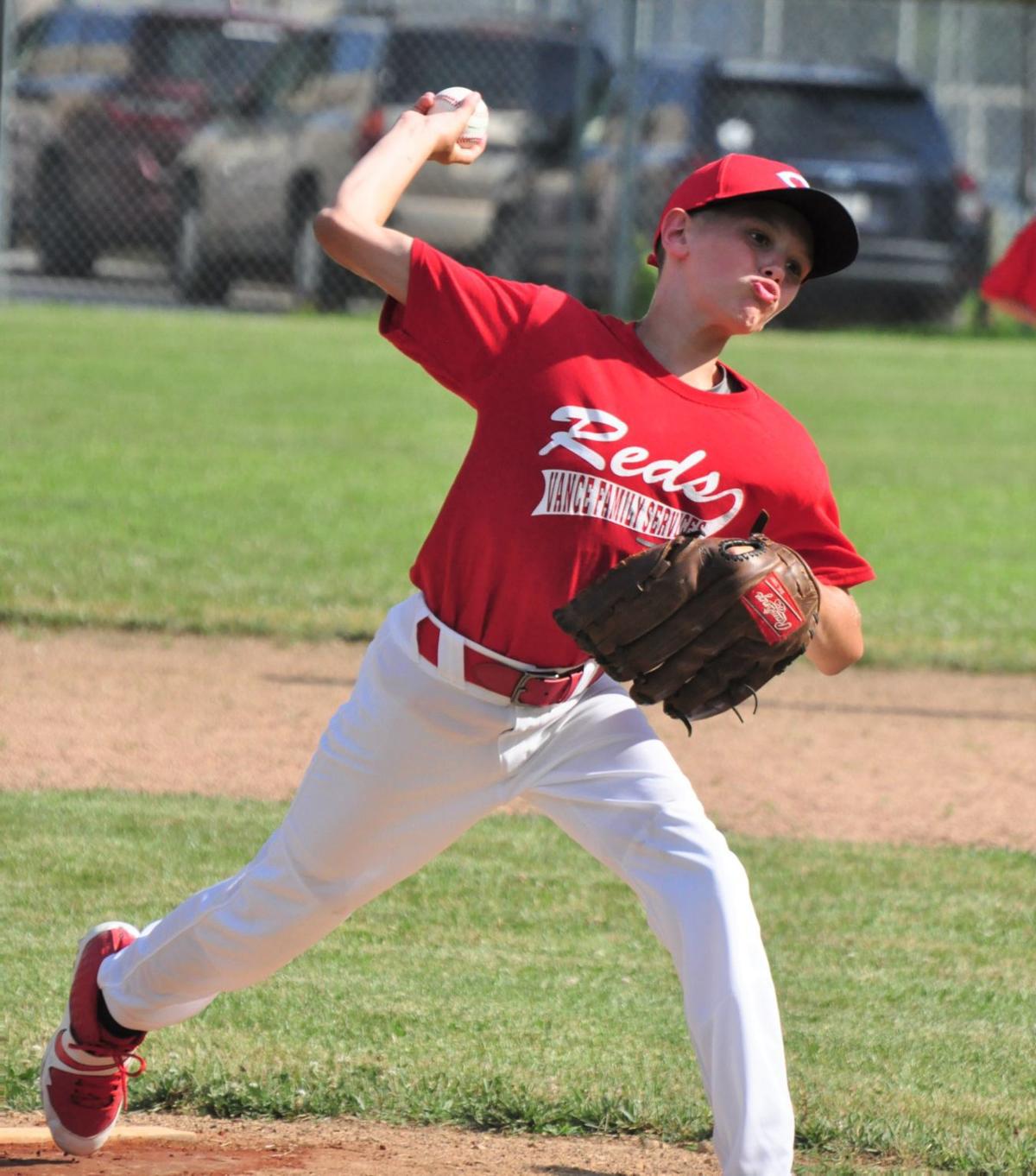 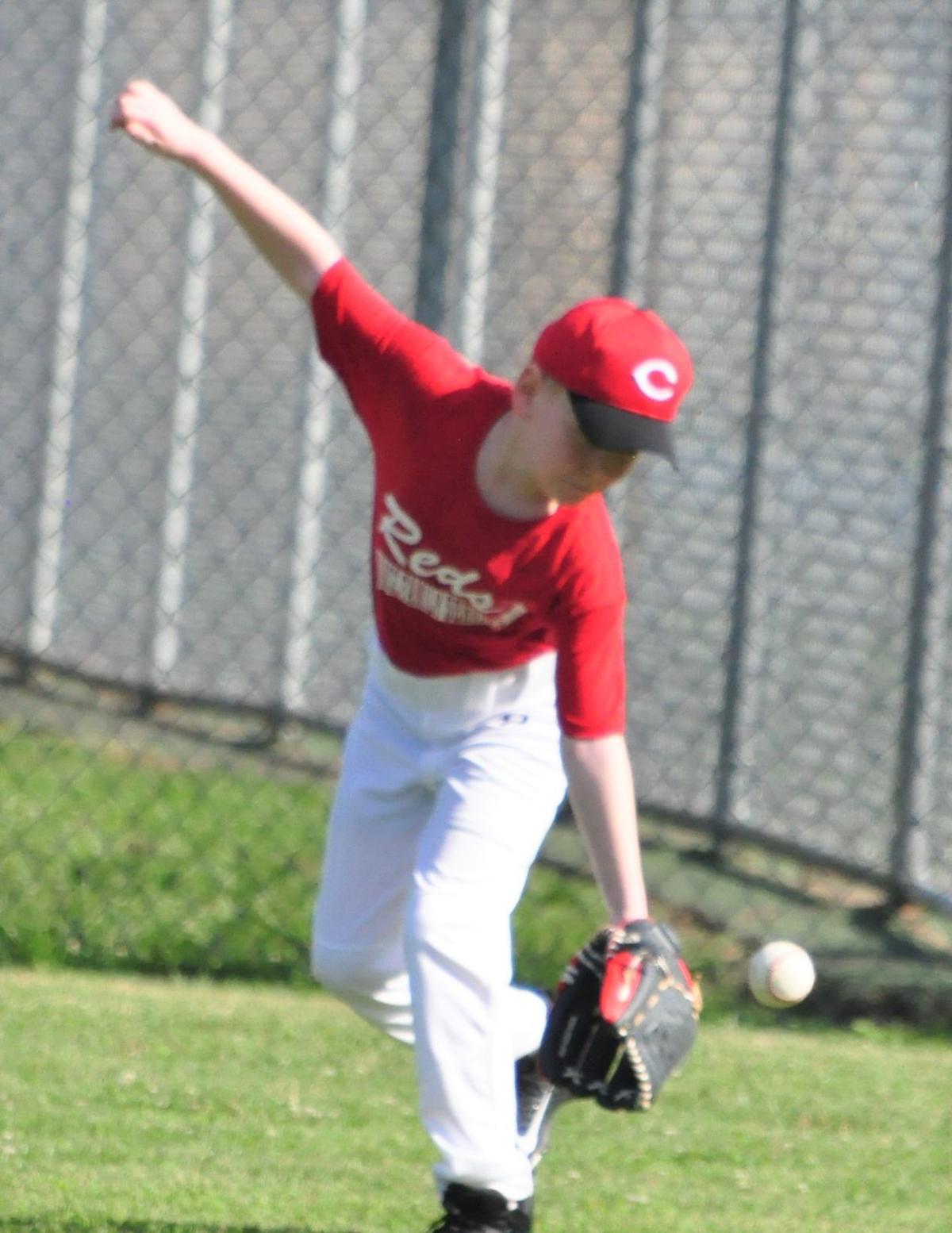 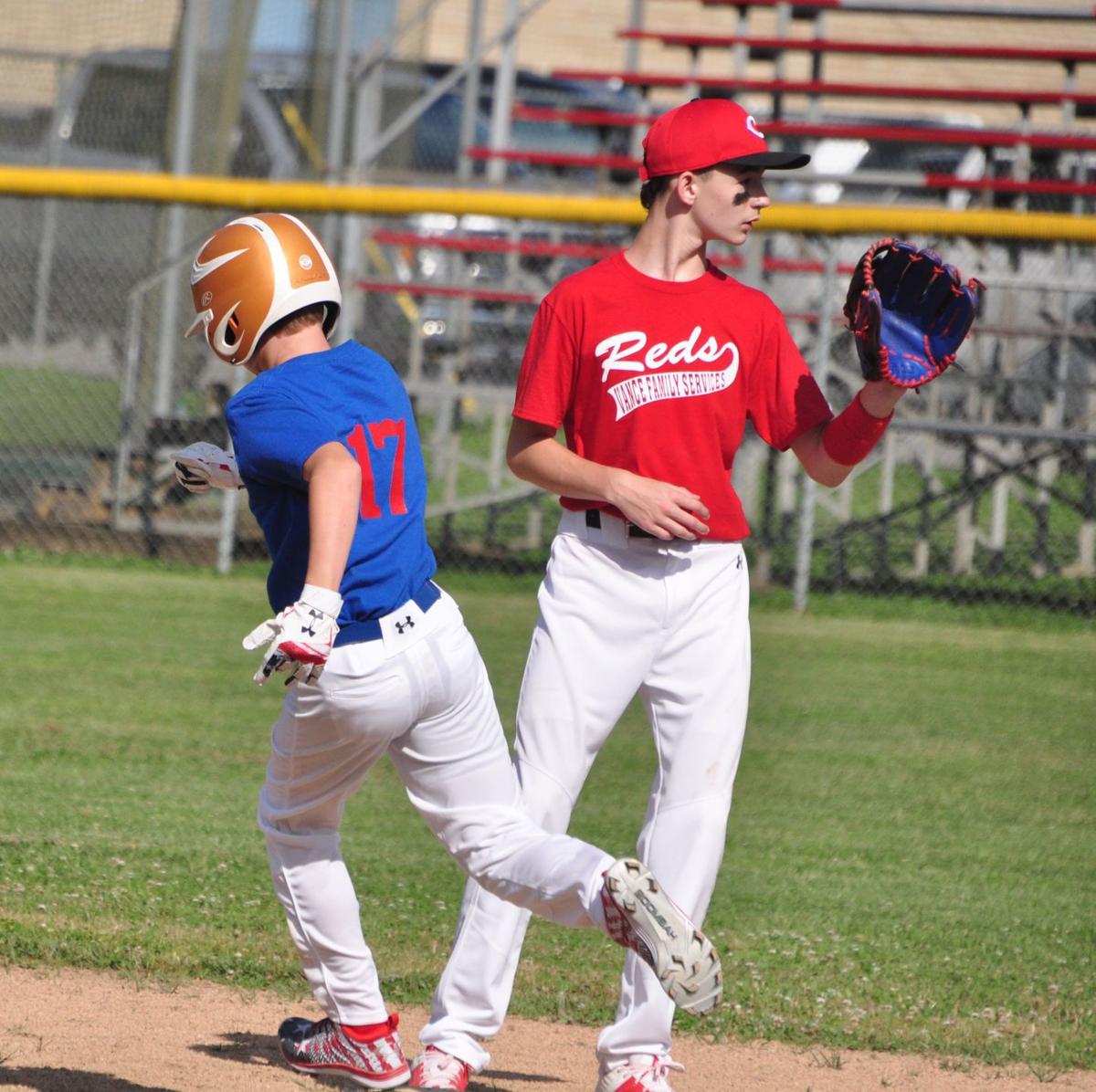 The Cubs’ Gavin Fitzpatrick (17) rounds second base and heads for third in Monday’s contest against the Reds in the Logan Little League’s Opening Day game at Paul Hale Field. 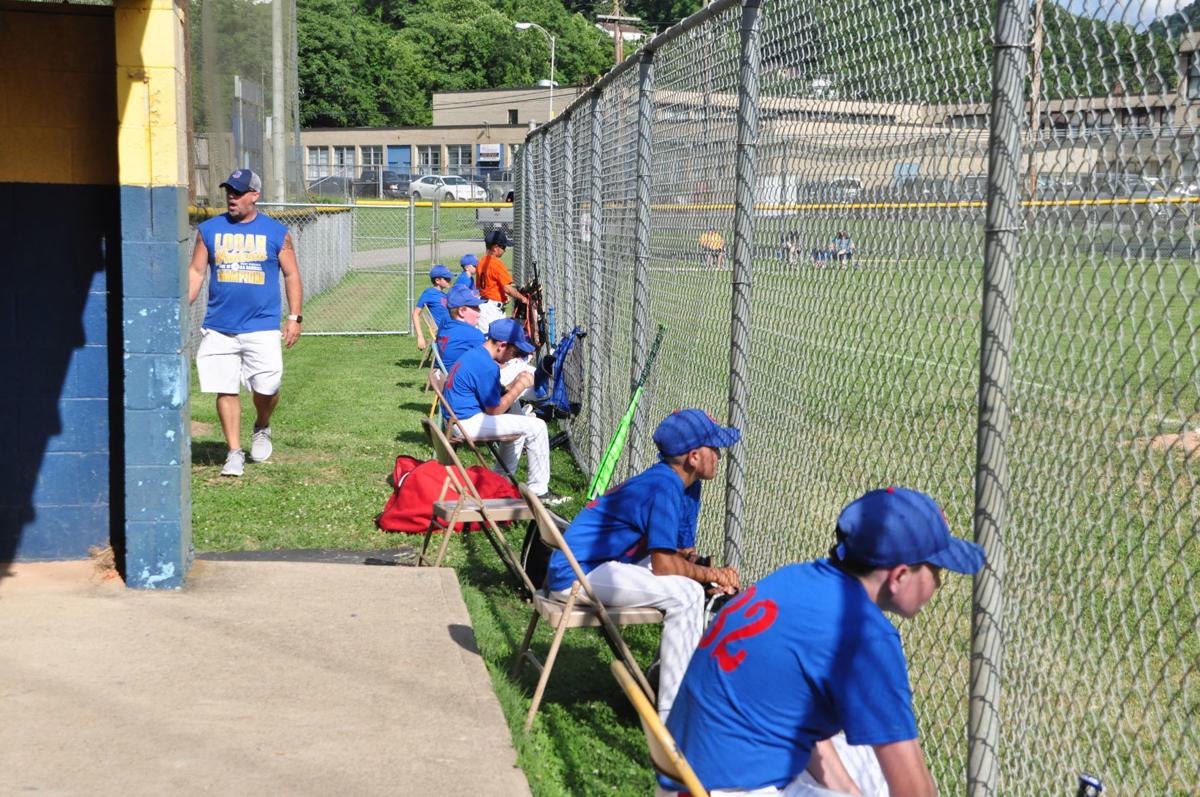 Paul Adkins/The Logan Banner The Logan Little League’s Major League Cubs sit in the bench area before their game with the Reds on Monday, June 22, 2020 at Logan’s Paul Hale Field. 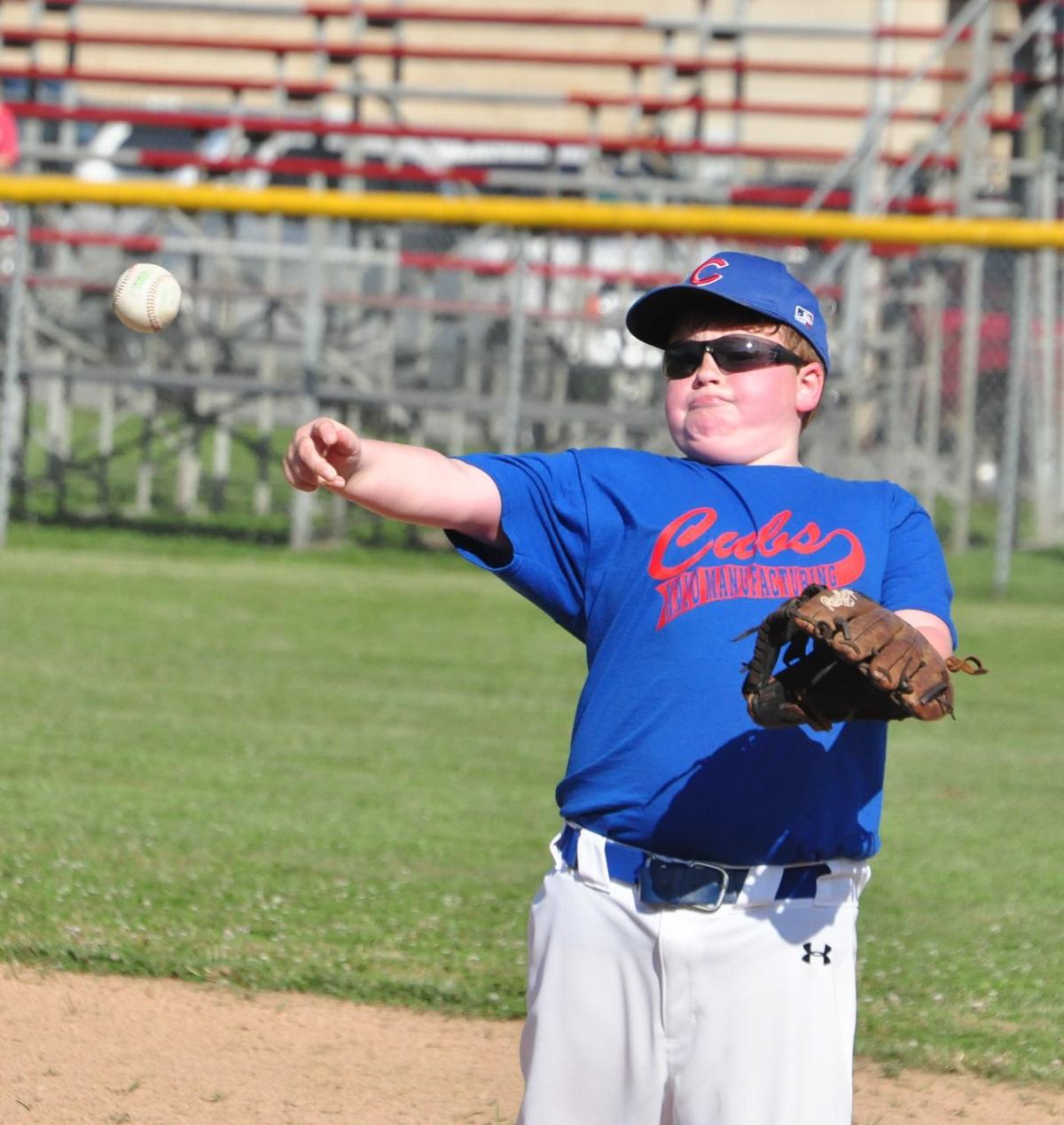 Paul Adkins/The Logan Banner The Logan Little League Cubs’ second baseman Chase Butcher tosses to first base for an out in their game against the Reds at Logan’s Paul Hale Field on Monday, June 22, 2020. 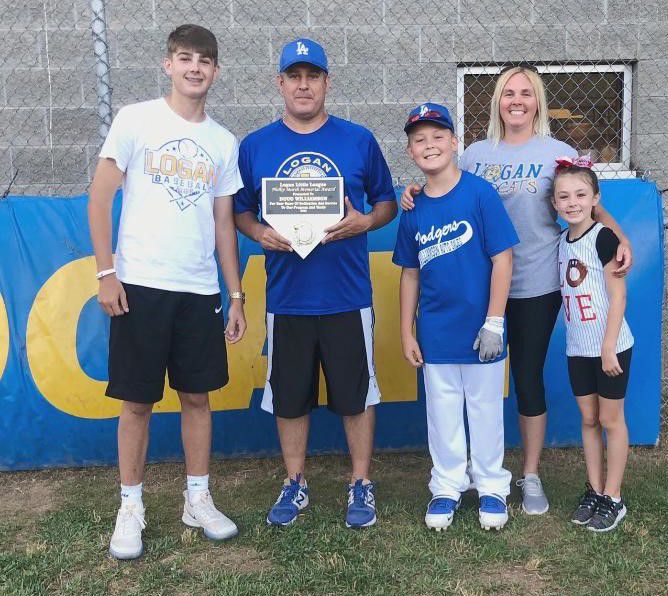 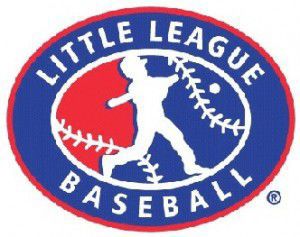 Cubs’ pitcher Hunter Woodrum fires one to the plate in Monday’s Logan Little League Opening Day game against the Reds. The league is playing an abbreviated schedule this summer in the wake of the COVID-19 crisis.

The Cubs’ Gavin Fitzpatrick (17) rounds second base and heads for third in Monday’s contest against the Reds in the Logan Little League’s Opening Day game at Paul Hale Field.

Paul Adkins/The Logan Banner The Logan Little League’s Major League Cubs sit in the bench area before their game with the Reds on Monday, June 22, 2020 at Logan’s Paul Hale Field.

Paul Adkins/The Logan Banner The Logan Little League Cubs’ second baseman Chase Butcher tosses to first base for an out in their game against the Reds at Logan’s Paul Hale Field on Monday, June 22, 2020.

After the COVID-19 pandemic hit in March, sports hit a standstill as all leagues were shut down.

The entire high school spring sports seasons of baseball, softball, tennis and track were called off before they even started.

And to date, Major League Baseball has yet to take to the field for the 2020 season as a deal for a possible 60-game season to begin in July is being hashed out.

But as the coronavirus crisis continues to fade, the nation is bouncing back in a big way both economically and in normal every day life.

Those sentiments were heard a lot around the ball yard on Monday at Logan’s Paul Hale Field as the Logan Little League held its Opening Night.

A total of nine teams will take to the field.

There will be no Coach Pitch, no T-ball or no all-star tournaments as games will be confined to two age divisions: the Major Division (10-12) and the Minor Division (7-9).

League officials are still being mindful of the virus and special rules have been put into place to adhere to state heath guidelines.

Those were on display on Monday as two games were played. The Cubs toppled the Reds, 7-5, while the Dodgers doubled up on the Astros, 10-5, in a pair of Major Division contests.

One big rule change is that the home plate umpire will instead be behind the pitcher six feet from the mound.

The umpires can’t touch the balls or bats and each pitcher is told to take the ball back into the dugouts in the inning change overs and use it for the next inning.

The dugout areas at Paul Hale Field have also been modified.

Instead of having players huddle in a small bench area in the dugout, chairs have been placed six feet apart going down the first and third base lines with extended fencing.

Players are also not allowed to high-five, huddle together or slap hands with the other team after games, instead tipping their hats to each other from a distance is the new norm.

During the National Anthem and Little League Pledge before the game, players lined up on each foul line as usual but those lines were extended and players were spaced out.

Even with the new rules, it’s still baseball.

And it was a big deal that any baseball at all was played.

“I’m really happy that we are getting to have some kind of season,” Logan Little League President Les Goldie said. “I love watching these kids play. We want to get them back out here and start socializing with each other. We’d like to get back to normalcy and getting them to back to doing something.”

District 2 Administrator Mike Vickers was also on hand on Monday to take in the games, watching the action from the press box.

“Absolutely happy to see this,” Vickers said. “It tickles me to death. I’m glad to see that the kids are getting to play.”

Goldie said he was afraid to see baseball suffer in the Logan area if the 2020 season was a complete wash.

“We were afraid of that and that was one of our deciding factors when we sat down and talked,” he said. “We do work really hard with the youth and we try to feed good players into the middle school and into the high school. We were afraid that if we took a year off that it would significantly hurt our talent.”

The response has been overwhelmingly positive.

More than 200 area youth have signed up to play baseball.

Since the Logan Little League is the only league around, 25 kids from surrounding areas Chapmanville, Madison and Tug Valley have also signed up to play in Logan.

The Logan Little League has certainly welcomed those players with open arms.

“We lost a few players that did not decided to play because of COVID,” Goldie said. “But we picked up 25 players from other areas. It’s a short season but we want to play as long as we can. We were afraid of losing some kids because some of the kids play all sports. After August 1 we would have lost a bunch due to football, so that’s why will will call it quits on July 24. We will at least try to get some kind of season in.”

Vickers said a few other leagues had flirted with having a season but decided not to. That left Logan as the only one standing.

Games will be played every Monday through Saturday weather permitting. There will also be a short break around the Fourth of July.

“We will have two games Monday through Friday. There will be one game on Saturdays and no games on Sunday,” Goldie said.

Other than golf, baseball is a sport which is conducive to social distancing.

“The only time really when players would get close to each other is when you have base runners and they are running bases and they are trying to get them out,” Vickers said.

In normal years, mid to late June and into July would be the time for the annual Little League All-Star Tournaments.

On the national level, the US Regional tournaments and the Little League World Series have also been canceled.

There is still a slim chance to have a state tournament in the 10-12-year-old division, however.

It would be District 4 in the Beckley area which would host a state tourney this year. Last season, South Charleston played host to the state tourney.

“We have seven district administrators and we would set the guidelines on where to play,” Vickers said. “We are not going to have a softball tournament this year because the only league that had a place to host could not host it because they could not get the facility that they thought that they were going to get. So there will be no softball state tournament of any kind at the state level. For baseball, it would be in District 4 if we have it. That’s the Beckley area. We have not made a commitment to that if we are going to play.”