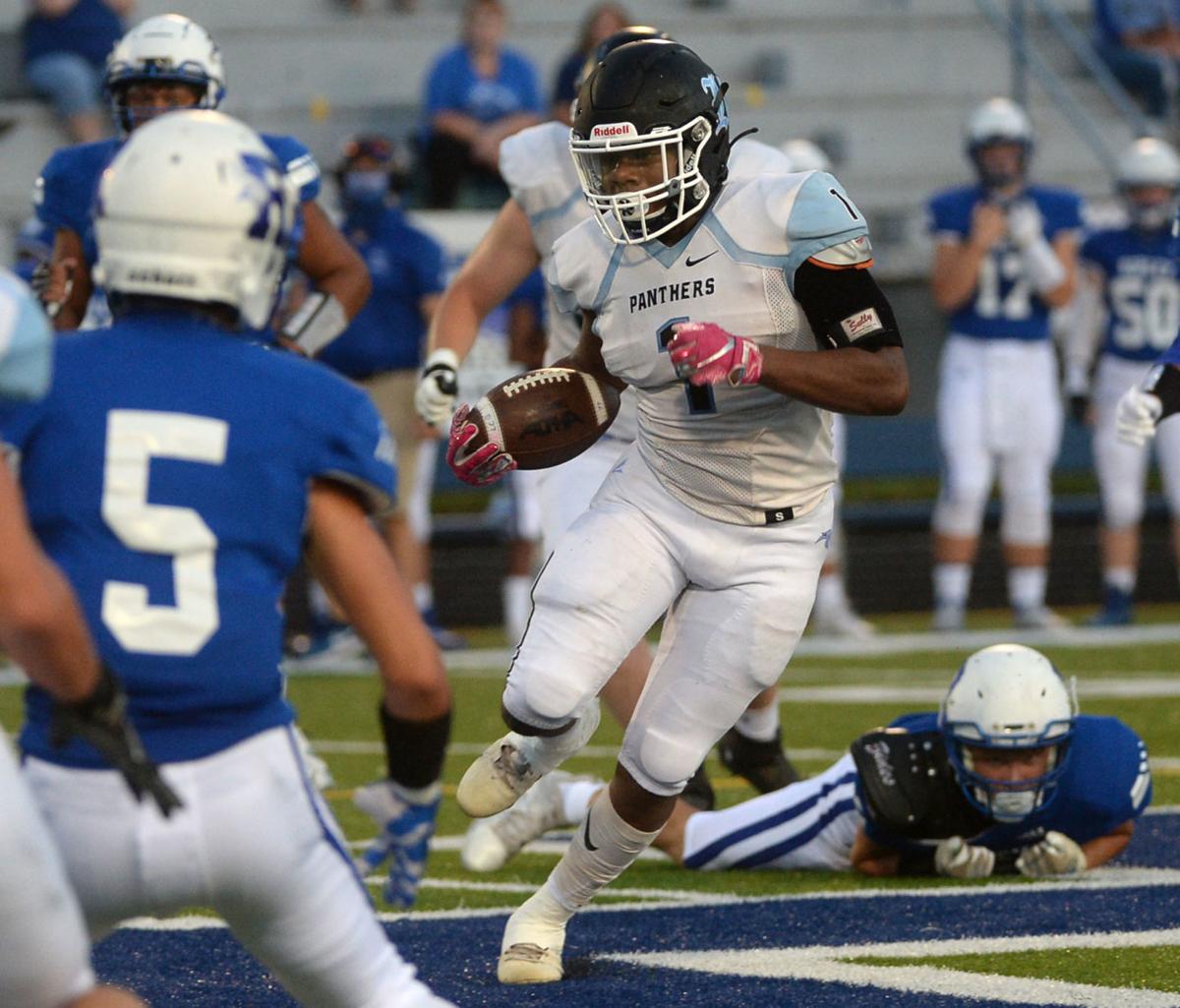 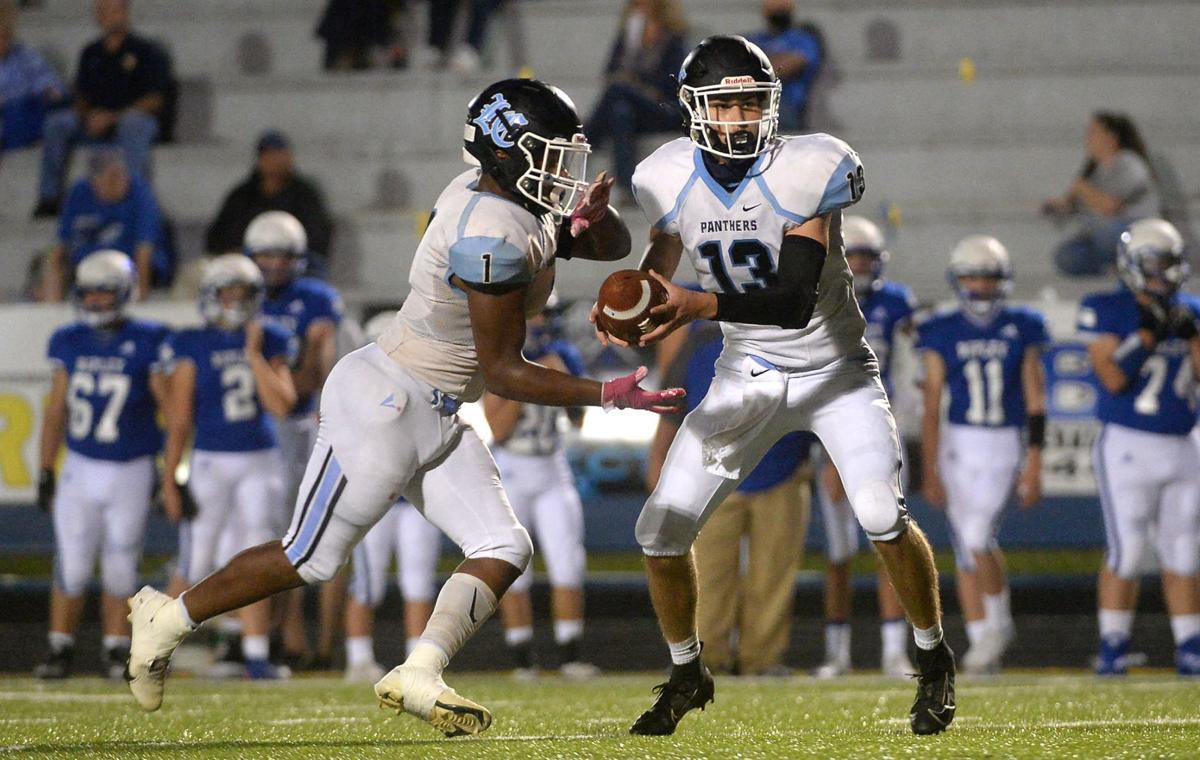 Lincoln County quarterback Gabe Bates hands the ball off to Isaiah Smith. Bates returns under center for the Panthers after throwing for 330 yards and two touchdowns in less than four games last season.

Lincoln County quarterback Gabe Bates hands the ball off to Isaiah Smith. Bates returns under center for the Panthers after throwing for 330 yards and two touchdowns in less than four games last season.

If Lincoln County’s football team is going to accomplish something it’s never done, chances are Isaiah Smith is going to have to keep doing the kinds of things he’s already done.

Smith, a versatile running back, returns for his senior season, and his presence makes the Panthers possible contenders for a Class AAA playoff berth.

Lincoln County, a consolidated school in Hamlin that opened in 2006, has never played in the postseason and owns just one winning record in its previous 15 seasons. However, the Panthers are coming off a 4-4 record and a near-miss — they finished 20th in the Class AAA ratings last year, four spots out of the final playoff berth — and as they gather for the current three-week summer practice period, they welcome back an experienced squad, led by the 5-foot-8, 183-pound Smith, who fittingly enough wears No. 1.

Last season, Smith ran for 1,254 yards and 13 touchdowns in eight games and caught nine passes for 145 yards and another score. He went over 100 yards rushing in six games, with two of those outings being 200-yard efforts. He averaged a healthy 7.2 yards per carry and 16.1 per reception.

“He’s such a luxury to have,’’ said Bradley Likens, the Panthers’ second-year coach. “He’s a coachable kid, too. Sometimes, it’s hard for me to find enough things to do with him, because he can bang it up inside, but he can also get the ball in space, and he’s dangerous there, too.

“Sometimes, it’s tough to figure out how I want to utilize him. It’s a luxury because we can use him in so many different ways. He can catch the ball and he can throw the ball, too. He played a little bit of quarterback as a sophomore. He can do it all.’’

Smith can also serve as the team’s workhorse on offense if necessary. He finished the season with six straight games of 20-plus carries, and it might have been seven if not for a bout of leg cramps suffered in the Panthers’ second game of the season at Ripley. Smith averaged 22 carries and 23 touches, posting back-to-back 20-carry, 100-yard games against playoff teams Princeton and Independence toward the end of the season. He capped his junior year with a 33-carry, 238-yard, three-TD explosion in a 43-20 win versus Mount View.

“When I took over last year, I looked at him in the locker room on the first day of conditioning,’’ Likens said, “and I told him, ‘You’re going to have to get yourself in shape because you’re going to touch the ball at least 25 times a game.’ So we did about what I wanted to do.

“Sometimes, we had to lean on him a little more than I wanted, but he’s very capable of handling the load. He knows that, and he kind of takes it in stride.’’

Smith isn’t the only senior Likens and the Panthers will be leaning on this season.

Bates completed 64 percent of his passes last season for 330 yards and two TDs and ran for a score. Adkins rushed for 133 yards and a TD and caught 15 passes for 218 yards and a score. Shimp, who took over under center when Bates went down, ran for 298 yards and two touchdowns and grabbed 12 passes for 106 yards.

Lincoln County’s lone winning season was an 8-2 mark in 2018, but the Panthers weren’t eligible for the playoffs that season because they didn’t play at least half their regular-season games against teams in their own class or higher. That won’t be a problem this year, since they compete against six West Virginia AAA schools.

Likens said that with the amount of experience his team sports this season, the playoffs are on the radar.

“Absolutely it’s the goal for us,’’ he said. “The group of kids that are seniors, we’ve had them for four years. I wasn’t the head coach their first couple years, but when I took over, they knew the expectations and they’ve grinded it out. And that is the goal.

“If we don’t have a winning record and get in the running for playoff position, all of us will look at it like we didn’t accomplish what we wanted to accomplish.’’