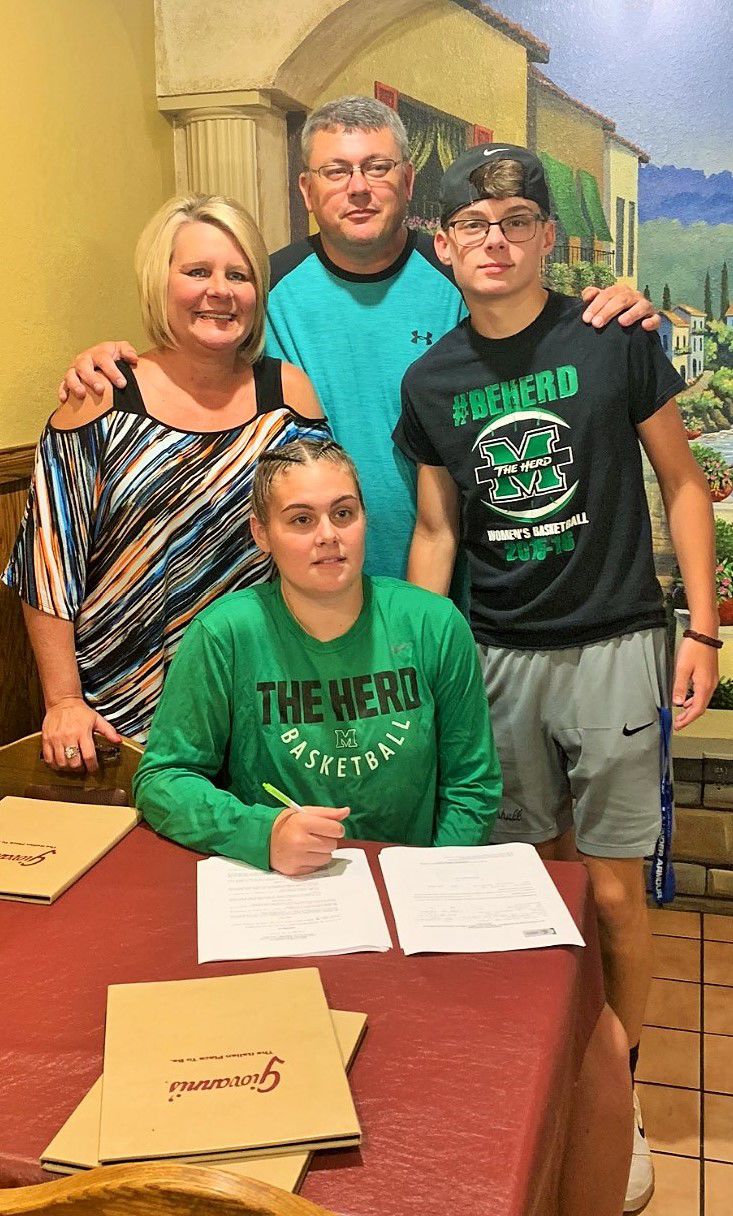 Submitted photo Logan native Shayna Gore poses for a photo with per parents Shane and Michelle Gore and her brother Branson Gore on Wednesday after signing her pro contract. 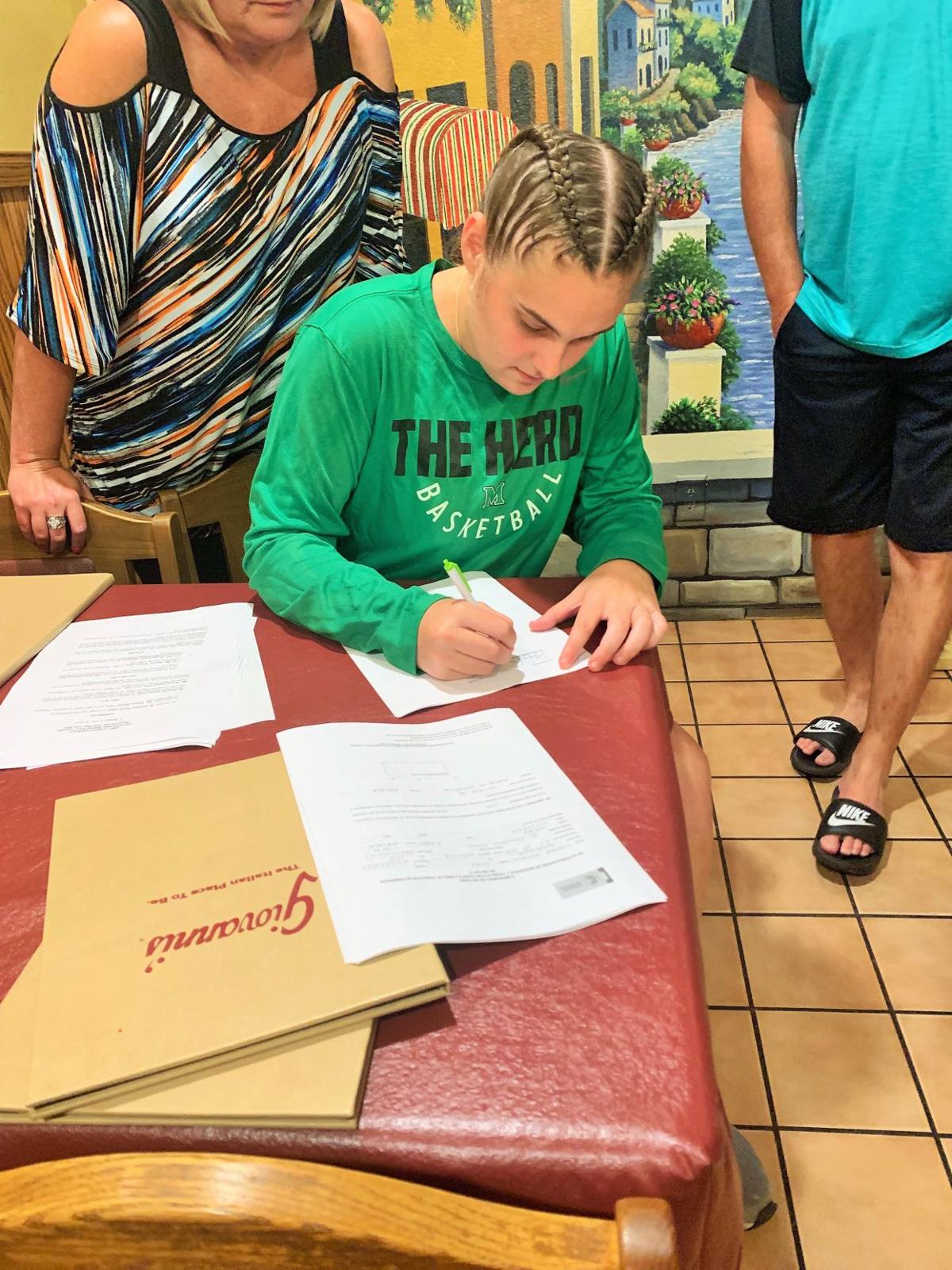 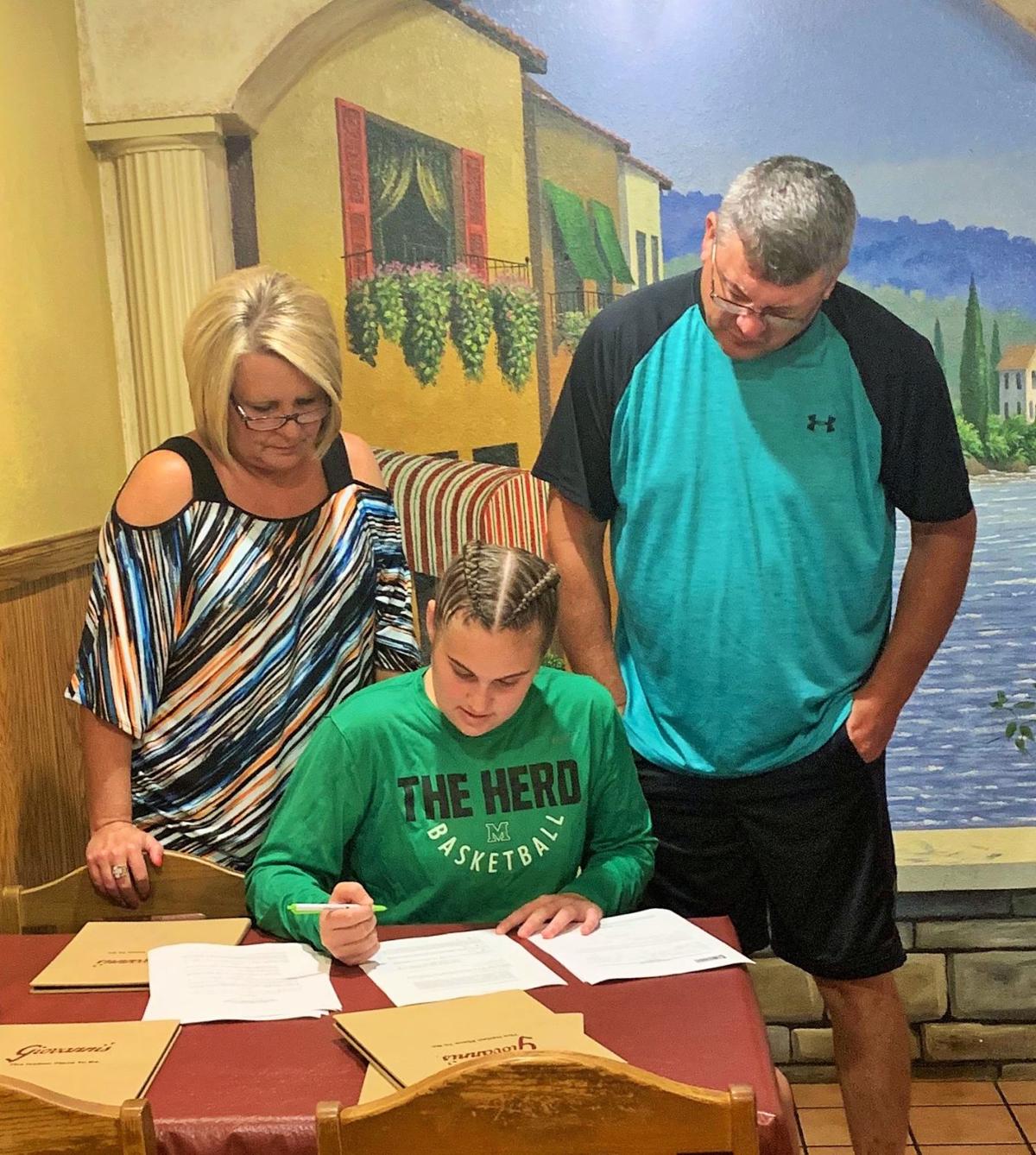 Submitted photo Logan's Shayna Gore signs a pro contract with Unicaja Baloncesto in Malaga City, Spain on Wednesday at the West Logan Giovanni's. Behind her are her parents Michelle and Shane Gore. 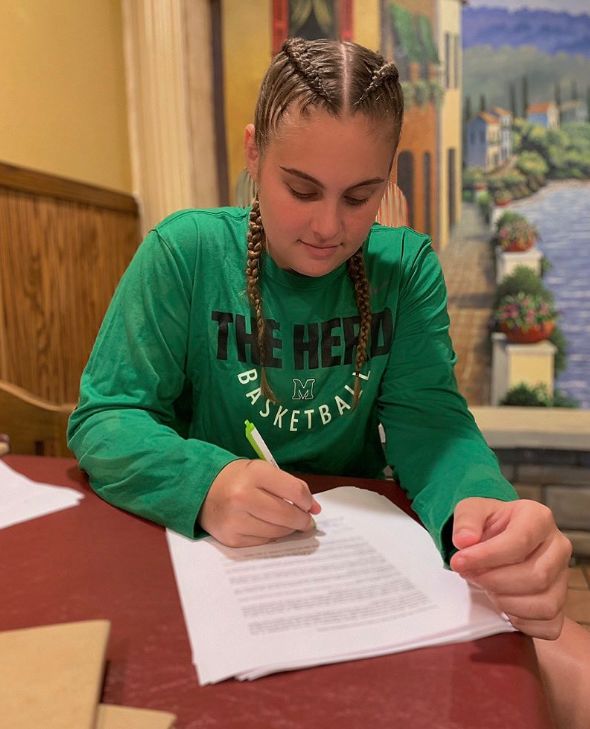 Submitted photo Logan native Shayna Gore poses for a photo with per parents Shane and Michelle Gore and her brother Branson Gore on Wednesday after signing her pro contract.

Submitted photo Logan's Shayna Gore signs a pro contract with Unicaja Baloncesto in Malaga City, Spain on Wednesday at the West Logan Giovanni's. Behind her are her parents Michelle and Shane Gore.

Shayna Gore is now a pro.

Que genial! How great, in English.

Gore, a Logan High School graduate and former player at Marshall University, signed on Wednesday with a pro team in Spain.

Gore, who just finished up her playing career with the Marshall University women's basketball team, signed with Unicaja Baloncesto in Malaga City, Spain on Wednesday at the West Logan Giovanni's.

The official announcement was made on her Twitter Page early on Friday morning.

Soon, her Twitter page and cell phone blew up, as she received dozens and dozens of well wishes and good lucks from family, friends, fans and also people from Spain, welcoming her into their country.

"Welcome to Málaga," Tweeted David Perez Camarena. "I'm sure you'll enjoy the city on and off the court!"

Tweeted Gore, "Super excited to sign to @unicajaCB in Malaga City, Spain! It's always been a dream to play professional basketball, now I get to do it across the world. Spain, lets get it!"

Málaga is a coastal city in southern Spain and lies on the Costa del Sol (Coast of the Sun) of the Mediterranean, about 60 miles east of the Straits of Gibraltar and about 80 miles north of Africa. The City has a population of 571,026.

Malaga, Spain has a long history as one of the oldest cities in Europe and one of the oldest continuously inhabited cities in the world. It is believed to have been founded around 770 B.C. The city also has a strong cultural and arts heritage and is the birthplace of painter/sculptor Pablo Picasso and actor Antonio Banderas.

Unicaja Baloncesto is just going into its third year of existence as the organization has had a men’s team since the late 1970s. It took Unicaja just two seasons to be promoted to Liga Femenina 2 as the squad finished second in 2017-18 – its first year on the court – and then first in 2018-19. The 2019-20 season tips off in October.

The team is known in Spanish as Unicaja Balonesto de Málaga. The women's team is also known as UnicajaCB Femenino.

Gore was recently passed over for a spot on the training roster of the WNBA's Dallas Wings and has since turned east toward Europe, hoping to land a spot there on one of the professional team's rosters.

"She's awesome," Gore said of Lopez. "Even during basketball season when I couldn't sign she was still keeping in contact with me. My mom and dad and myself thought she was the best fit for me."

With Gore playing overseas she's following in the footsteps of another former Logan and Marshall basketball standout, Stevie Browning, who has played the last couple of seasons in the men's Euro Leagues in Turkey, Hungary and Greece.

Only a handful of Logan County athletes have ever played professionally.

Gore said had previously said earlier in the summer at her basketball camp that she had targeted three countries as possible pro team destinations -- Spain, France and Russia.

Always the competitor, Gore said she wants to play in a good league. She's got just that.

Gore said her agent and parent company Four Player Sports Agency have been very beneficial in helping her reach her dream.

Gore had a successful career with the Thundering Herd. In her senior season this year she averaged 20 points, 3.6 rebounds and 3.3 assists per game and was named to the First-Team All-Conference USA Team. She shot 38 percent from beyond the 3-point arc, sinking a total of 90 3s. She also had 50 steals and nearly 100 assists.

Gore was second in C-USA in scoring last season and was named to the All-Conference Second Team the last two seasons.

Marshall finished 17-15 this past season, falling 83-71 to Appalachian State in the quarterfinals of the Women's Basketball Invitational.

Gore, a 5-foot-10 shooting guard, finished her career with 2,081 points, a mark that is third all-time in program history and ties her for sixth in Conference USA's all-time record book.

She said she's going to miss Marshall, West Virginia and the United States but is happy to make this dream come true.

"Oh my gosh," Gore said. "It feels so weird. The season ended a few months ago but it feels so different now. They are having workouts and I'm not there and I am like, 'what do I do with my life?"

Said Gore in a recent Tweet: "Thank you Marshall University! Because of this school I will walk away a better person and have memories with me forever! It’s been a fun ride! I will always bleed green! Go Herd."

Gore was second in C-USA in scoring last season and was named to the All-Conference Second Team the last two hoop campaigns.

Looking back on it, Gore said Marshall was the perfect pick for her.

"I got chills thinking about having Marshall across my chest," she said. "Once you are there you really don't want to leave. I chose Marshall because I wanted to stay close to home. When I stepped on Marshall's campus it felt like home. This was it for me. I accomplished a lot there but I would trade every single award there to have a championship. I really wanted that. It's something that I never really reached. Each season was a roller coaster season."

Gore had an illustrious prep career at Logan High School as she led the Lady Cats to the 2013 Class AAA state championship game.

She averaged 28 points per game her senior year in 2015 and was named as the West Virginia Gatorade Player of the Year.

Named First-Team All-State three years in a row, Gore closed out her prep career with 1,991 points, the most in Logan High School history for either gender.

Gore came on as a freshman player at Logan in 2012.

Then the following season, she led Logan to the Class AAA state tournament.

Logan defeated Princeton in the 2013 state tourney opener at the Charleston Civic Center then downed Spring Valley 52-49 in the state semifinals to reach the state championship game.

In the semifinal win over the Timberwolves and with the game tied at 49 in the closing seconds, Gore dribbled across the top of the key looking for a possible game-winning shot. She then found teammate Hannah Tothe, wide open, and standing behind the 3-point arc.

Gore passed to Tothe who then drained a 3-pointer with three seconds left, putting Logan into the state finals where the Lady Cats lost 58-34 to Parkersburg South.

"I remember this like it was yesterday. They pressed us and I caught it in the corner. I crossed over and drew a double team. I guess they thought I was going to the one to take the last shot," Gore said. "I then did a spin move, saw her open and kicked it to her and she made it. I sometimes go back and watch our senior video because that video clip is in it. I sometimes go back and watch it just to relive it."

Gore also played four years for the AAU West Virginia Thunder team, a squad that finished ninth in the national tournament in Florida.

Gore said she has a lot of fond memories of the Logan All-Girls League, where she began playing basketball as a mere tyke.

"I remember like it was yesterday, playing in the All-Girls League, playing for Mike (Tothe) and then going to the Thunder," Gore said. "Mike did a lot for me. He's a part of who I am today."