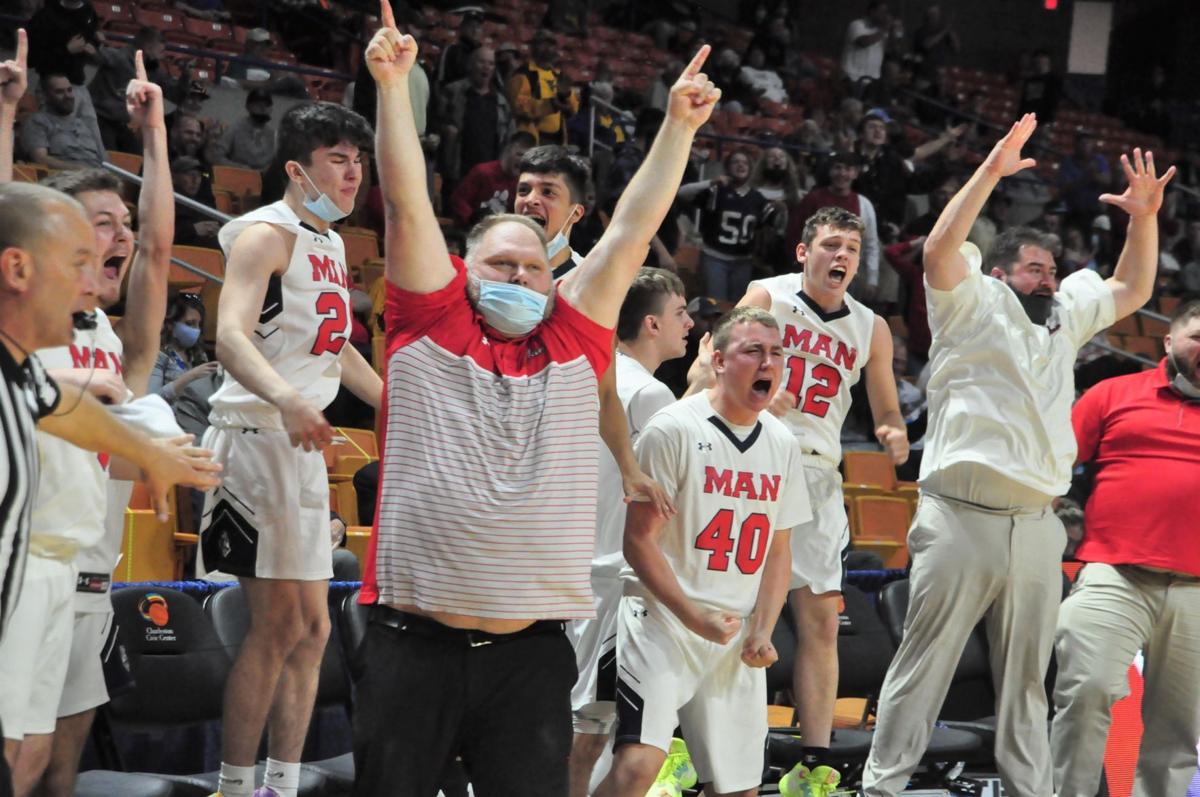 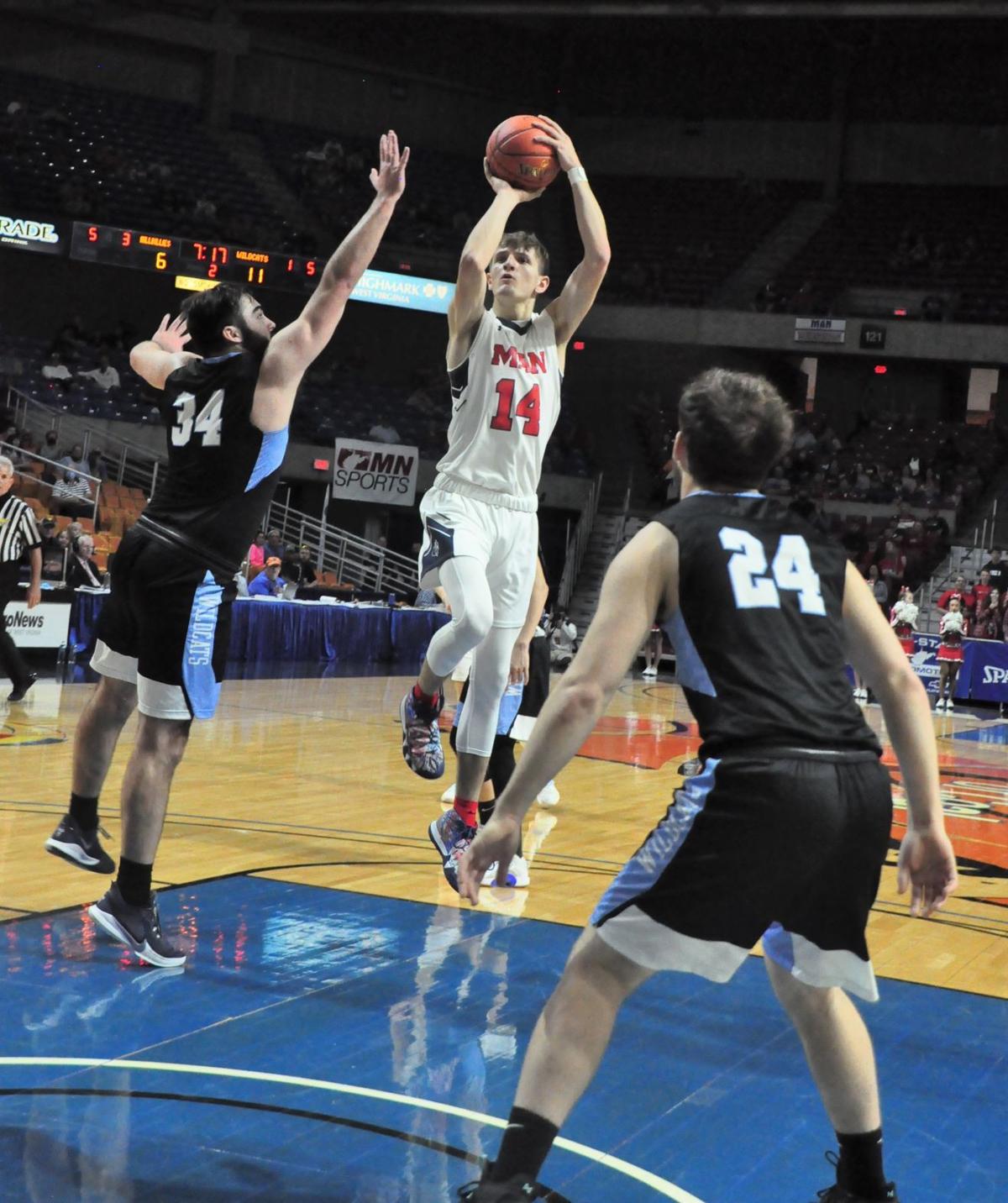 Man High School’s Austin Ball puts up a shot in the lane in the Billies’ 43-36 win over Pendleton County on Saturday, May 8, 2021 in the Class A state championship game at the Charleston Coliseum. 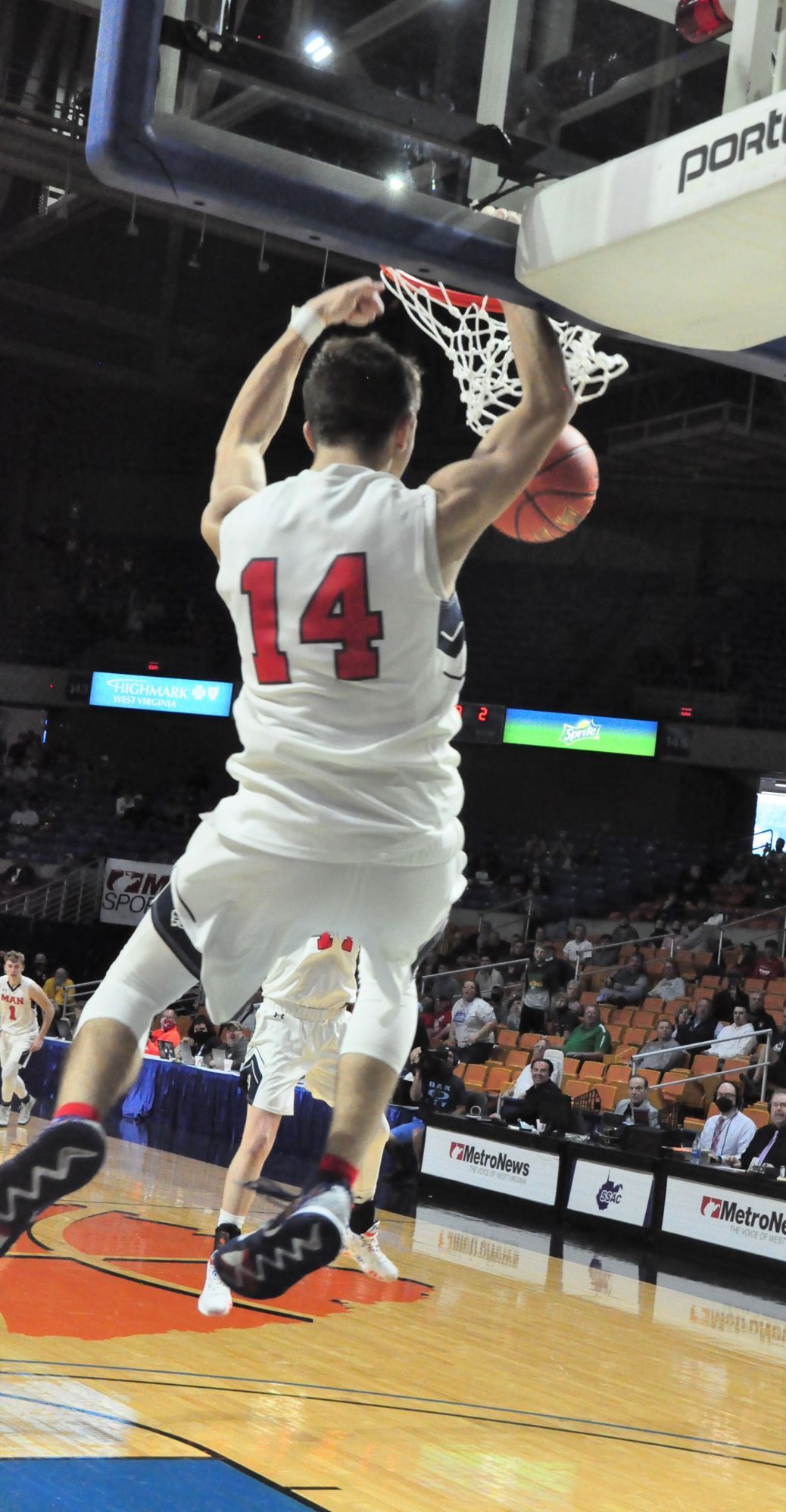 Man High School’s Austin Ball puts down the game-clinching dunk in the Billies’ 43-36 win over Pendleton County on Saturday, May 8, 2021 in the Class A state championship game at the Charleston Coliseum. 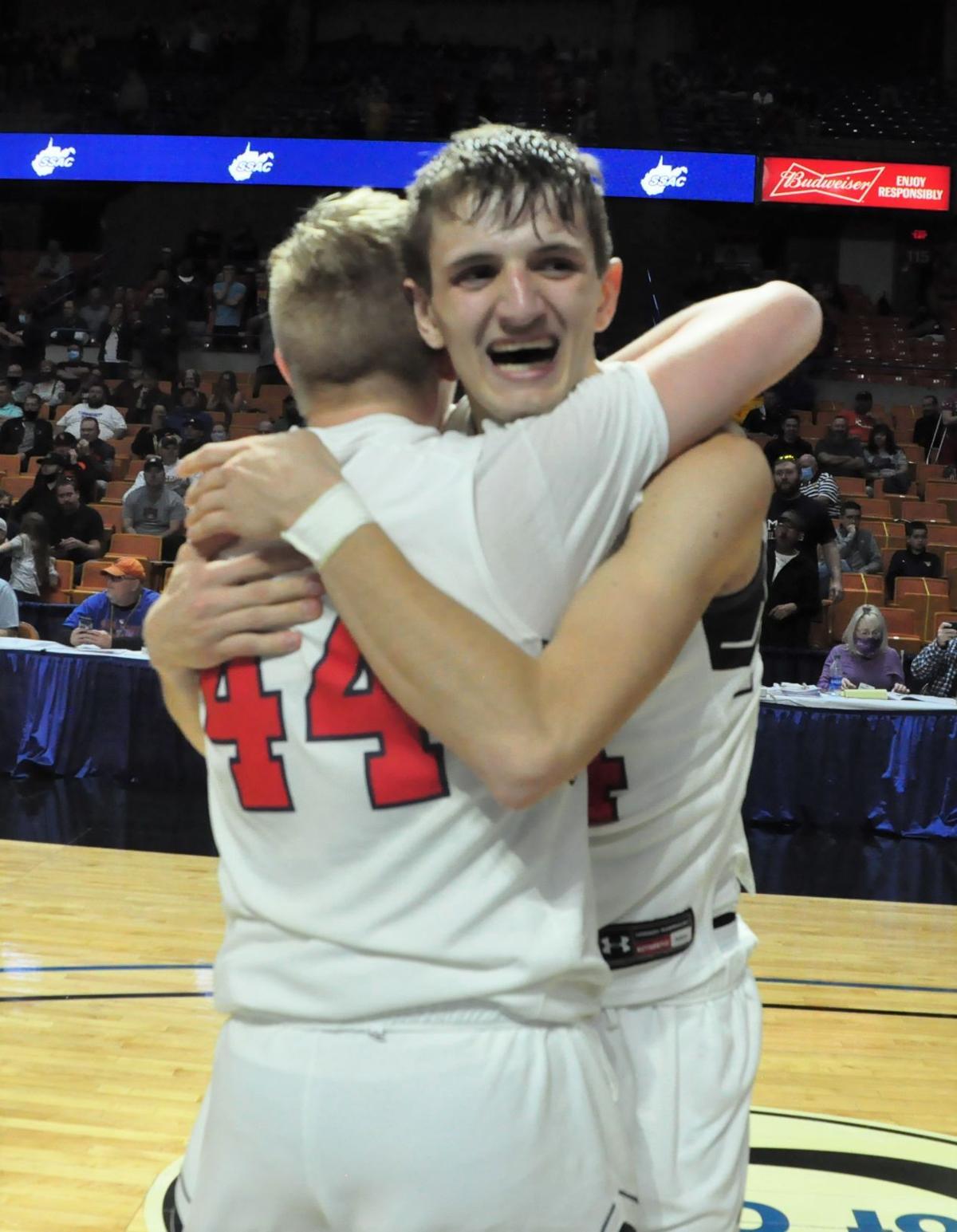 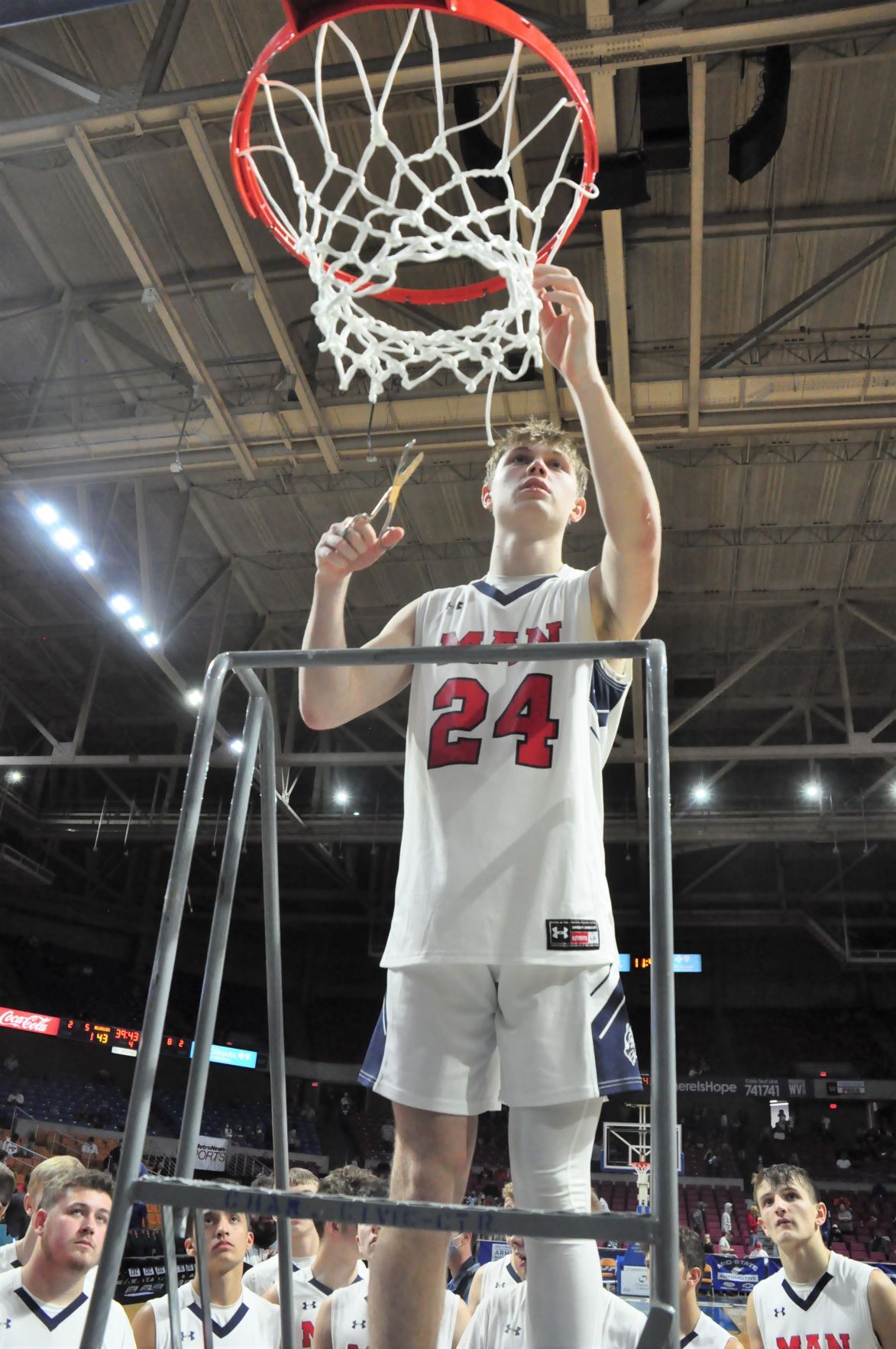 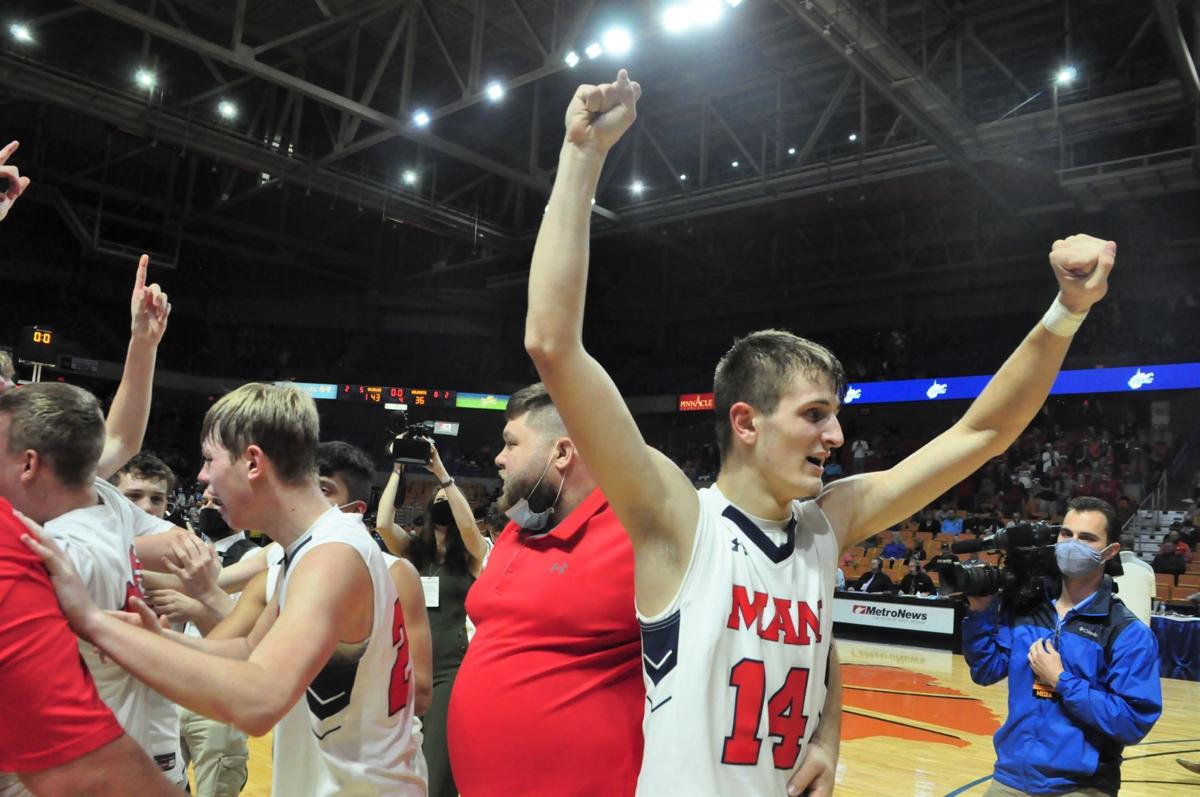 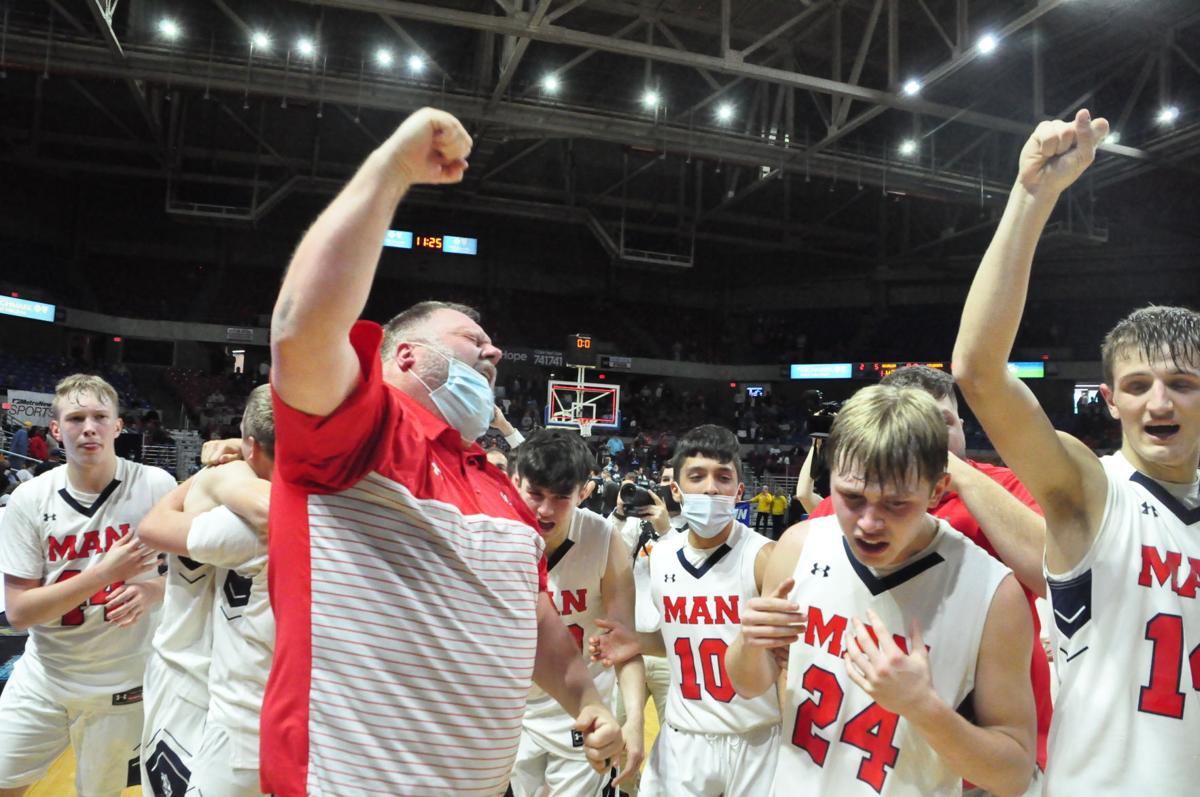 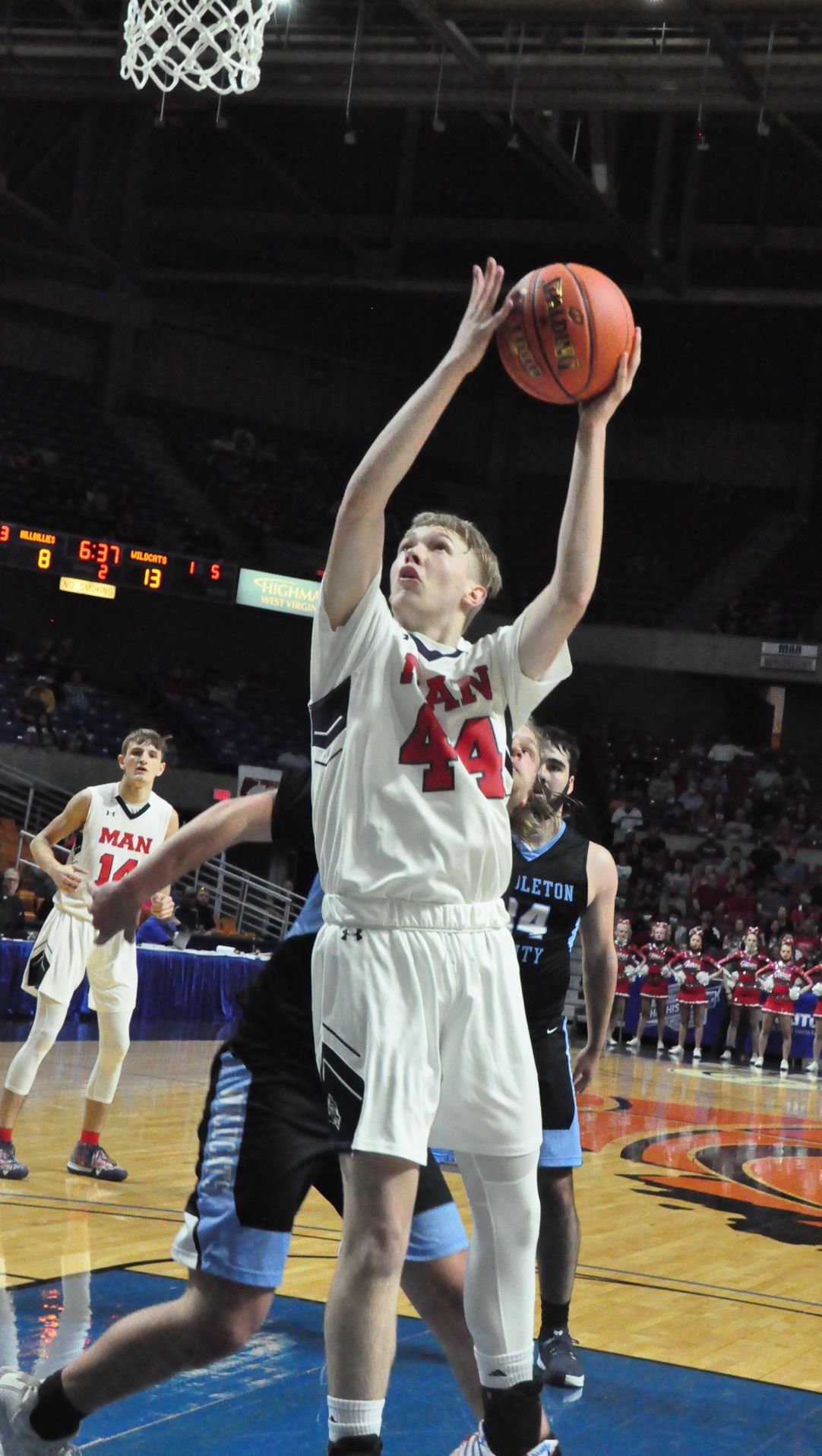 Man High School’s Jackson Tackett puts up a shot in the lane in the Billies’ 43-36 win over Pendleton County on Saturday, May 8, 2021 in the Class A state championship game at the Charleston Coliseum. 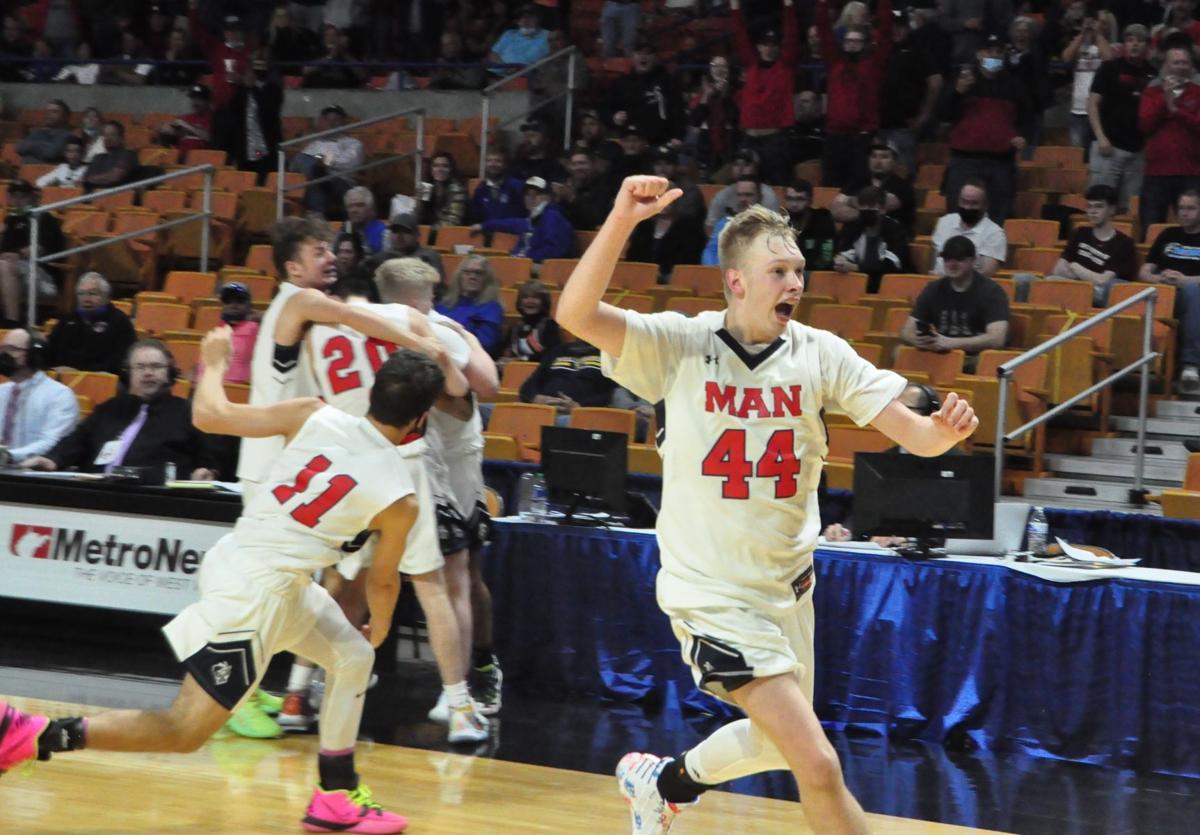 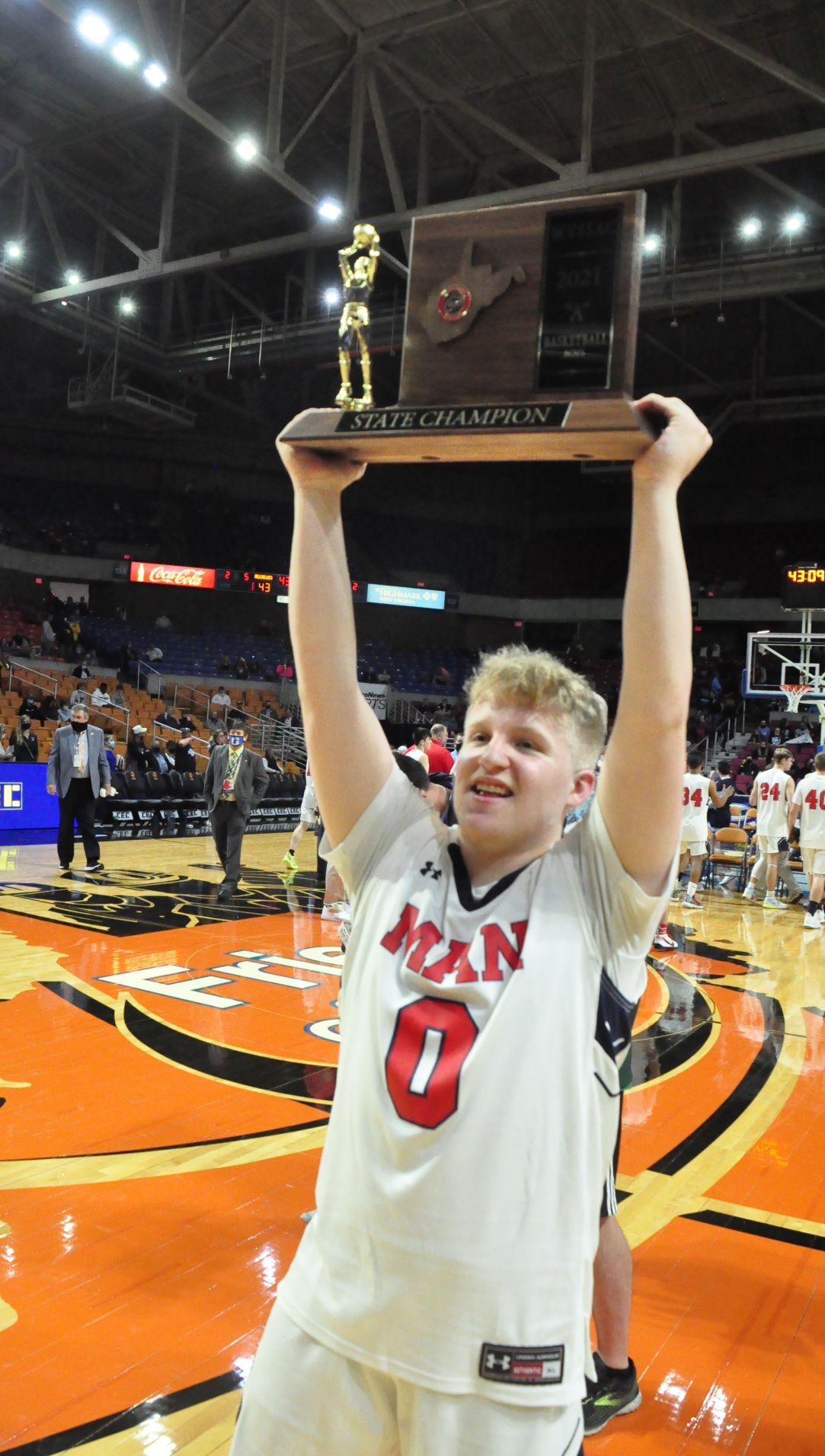 Man poses for a photo after capturing the Class A state title on Saturday, May 8, 2021.

Man High School’s Austin Ball puts up a shot in the lane in the Billies’ 43-36 win over Pendleton County on Saturday, May 8, 2021 in the Class A state championship game at the Charleston Coliseum.

Man High School’s Austin Ball puts down the game-clinching dunk in the Billies’ 43-36 win over Pendleton County on Saturday, May 8, 2021 in the Class A state championship game at the Charleston Coliseum.

Man High School’s Jackson Tackett puts up a shot in the lane in the Billies’ 43-36 win over Pendleton County on Saturday, May 8, 2021 in the Class A state championship game at the Charleston Coliseum.

Man poses for a photo after capturing the Class A state title on Saturday, May 8, 2021.

CHARLESTON — When T.J. Blevins took over as the head coach of the Man High School basketball team four years ago his Hillbillies finished 0-22.

A winless season. A doughnut.

Among the lowlights that year was a 51-point loss to Logan, a 64-point blowout at the hands of Tug Valley, and defeats to Chapmanville of 59 and 73 points.

That’s all a distant memory now.

Fast-forward four years, and the Hillbillies are on the top of the mountain.

Man is the state champions.

For the first time ever.

Class A No. 1-ranked Man won its first state championship with Saturday morning’s thrilling 43-36 victory over Pendleton County in the Single-A state finals at the Charleston Coliseum. The Hillbillies (16-2) were making their first trip to a state championship game since 1990.

“It’s a dream come true,” Man coach T.J. Blevins said, wearing one of the nets around his neck in the post-game press conference.

Man rallied late from a four-point deficit and secured the win in an exciting flurry of events.

Senior guard Peyton Adams came up big in the clutch, sinking 5 of 6 free throws, the last two which put Man on top 41-36 with 22.7 left in the game.

Man’s 6-foot-7 junior center Austin Ball then put the exclamation point on Man’s with after putting down a two-handed slam dunk with eight seconds left to set the final score.

The celebration was on.

Coach Blevins raised his hands in the air, then hugged his son, 6-4 junior Caleb Blevins, who had propelled Man into the Class A state championship game by sinking eight 3s on Thursday in the 81-54 semifinal win over Webster County.

Down four points with two and a half minutes left, it wasn’t looking good for the Hillbillies.

Blevins then scored on a drive down the lane with 2:22 to go, cutting Pendleton County’s lead to 36-34.

The Wildcats had the ball with less than a minute left but Man’s Jeremiah Harless took a charging call with 46.4 ticks to go, giving the ball back to the Billies.

Adams was fouled with 35.5 seconds left and connected on both free throws as Man led 39-36. He would finish the game with six points, all of which came from the free throw line on 6 of 8 shooting. Man would close out the game on an 11-0 run.

“That was the turning point. Those free throws and Jeremiah Harless taking the biggest charging call of his life,” Coach Blevins said. “We take pride in taking charges. We practice that all the time. Man, he took one there and that was an absolute game-changer.”

Pendleton’s Isaiah Gardiner missed a 3 with 25 ticks to go and Man rebounded and Adams was fouled again with 22.7 seconds left. He netted both, pushing Man’s lead to 41-36.

“They say that you live and die at the free throw line and we have Mr. Ice right here,” Blevins said, turning to Adams. “Those were some clutch free throws.”

After missing his first free throw, Adams then netted his last five.

“Normally in most games I step up and take one or two dribbles and shoot. Today, you saw how I held the ball at my pocket and took a few deep breaths to calm myself down,” Adams said. “I was shaking and I was praying during the time out. After that first miss I took my time.”

After Adams’ last two free throws, Ball’s dunk made Man fans roar, a thundering roar which seemed to shake the coliseum. Ball led all scorers with 20 points. He also had six rebounds, a steal, a block and an assist.

“Oh my goodness,” Ball said, when asked about the game icing jam. “Talk about chills. The crowd behind me. It was something that I’ve always dreamed of.”

Tanner Townsend led Pendleton County with 13 points, sinking a trio of treys which all seemed like daggers to Man. The Wildcats closed out the season at 17-1 and saw its 40-game winning streak snapped.

Pendleton County seemed to frustrate Man with its tough defense and physical play.

“I give them credit for a good defensive game plan,” Blevins said. “I thought that they were going to be a little bit more slow paced than they did. We gave up some 3s that I didn’t think that they would hit. They came out prepared and stoked some 3s on us and caught us off guard. We were fighting hard to get to the basket because those guys were so big. They were bumping us and playing physical. After that first quarter we were down five points and that was just not Hillbilly basketball but they controlled us and controlled us most of the game. We just got some breaks that we needed and finished it.”

Adams agreed and said the Wildcats were very good.

“They are so big and they took us out of the game that we like to play,” he said.

The Billies are usually a very good perimeter shooting team.

“This was the first time since I’ve been coaching here that we did not hit a 3-point shot,” Coach Blevins said. “That we huge. We only took eight shots, so that tells you what kind of defense that they were playing on us. They were getting through our screens. They had an excellent plan ad we executed when we had to.”

Man landed four players on the all-tournament team in Blevins, Tackett, Ball and Adams. Townsend, Josh Alt and Bailey Thompson of Pendleton County were also on the squad along with Webster County’s Rye Gadd and Tug Valley’s Caleb May.

Ball’s 72 points was the most points scored by any Class A player in the state tournament. He averaged 24 points per game. May had the highest average at 26 points per game.

Blevins said the Town of Man is planning on having a parade for the team on Sunday.

“We’re going to have a pretty good parade,” he said. “I might even break out a Ric Flair robe.”