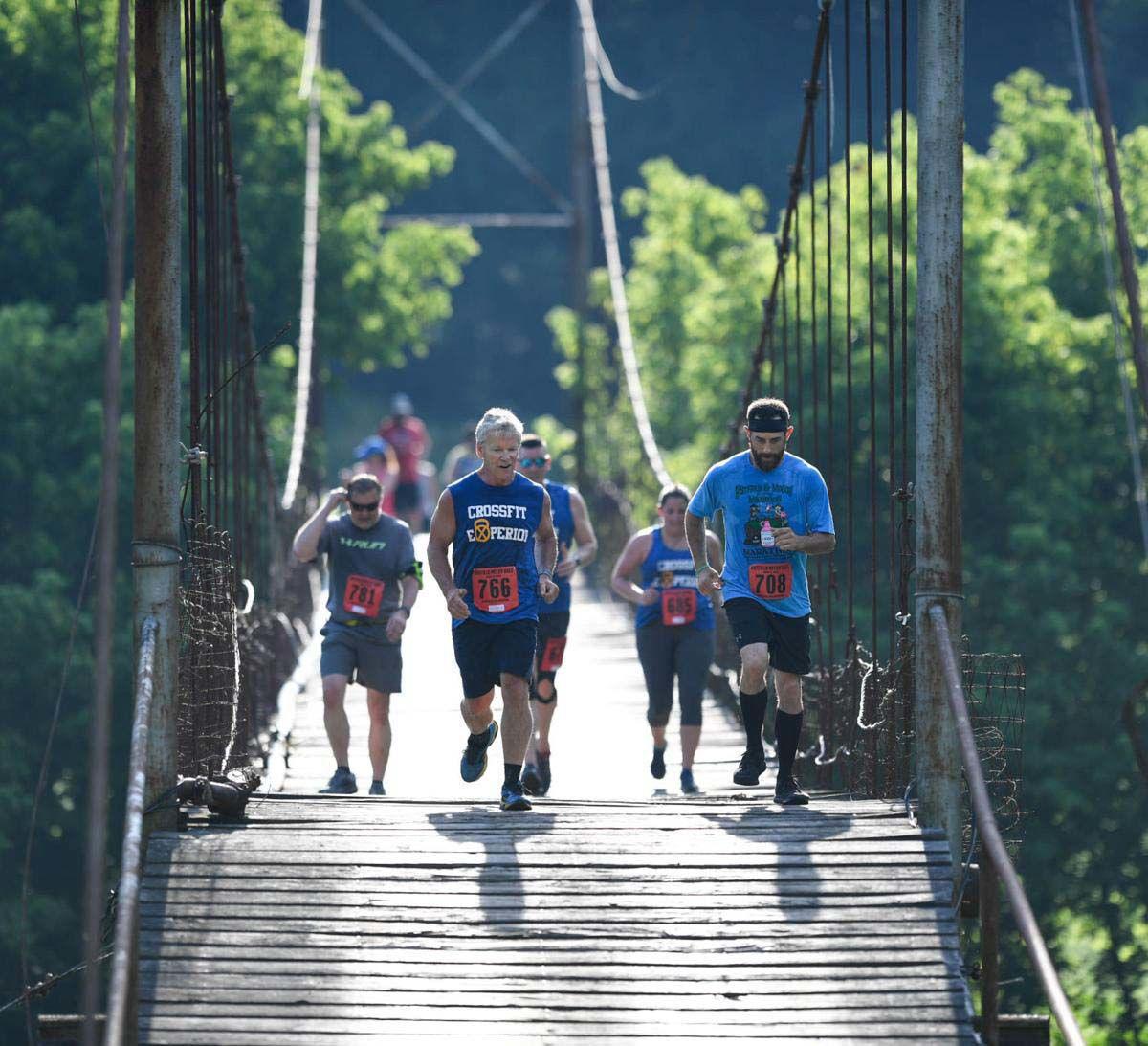 Courtesy Ray Justice Photography Runners cross back into West Virginia from Kentucky on the swinging bridge overtop of the Tug Fork River located at the Tug Valley Country Club in Sprigg, West Virginia during the 2018 marathon. 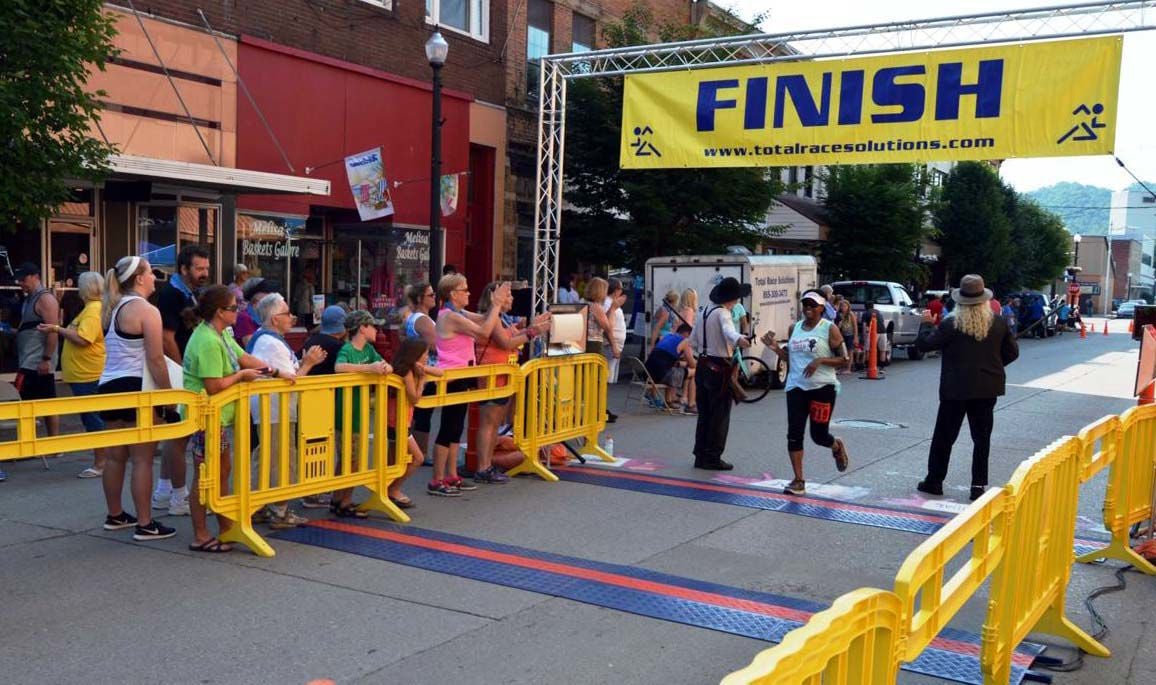 Travis Crum/HD Media A runner crosses the finish line in downtown Williamson, W.Va to a chorus of cheers from onlookers during the 2018 edition of the marathon.

Courtesy Ray Justice Photography Runners cross back into West Virginia from Kentucky on the swinging bridge overtop of the Tug Fork River located at the Tug Valley Country Club in Sprigg, West Virginia during the 2018 marathon.

Travis Crum/HD Media A runner crosses the finish line in downtown Williamson, W.Va to a chorus of cheers from onlookers during the 2018 edition of the marathon.

WILLIAMSON - When former Tug Valley Road Runners Club President and race founder David Hatfield along with other volunteers started the Hatfield & McCoy Marathon back in the year 2000, they had dreams that it would eventually grow into something special.

Fast forward 20 years, and the event has become recognized as one of the top and most challenging marathons in the United States and annually draws over 1,000 runners to the Southern West Virginia/Eastern Kentucky coalfields.

"This is one of the most unique races in the county," TVRRC President and race organizer Alexis Batausa said. "It's different than any other marathon you will find in the country. We enjoy organizing this race for our runners and guests to our community and we are really excited for this year's race."

The race always takes place on the second weekend in June, which falls this Saturday, June 8. The event features a full marathon (26.2 miles), two half marathons (13.1 miles each), a double-half marathon (half fanatic qualifier) and a 5K (3.1 miles).

In addition, the race was host the RRCA Kentucky State Marathon Championship in 2016.

The marathon, which is still held by the Tug Valley Road Runners Club, has continued to draw loads of guests into Williamson and surrounding communities for the event each of the past few years, with the number one compliment from the guests being the "southern hospitality" that is shown by the locals in the area.

"It's crazy to think back just five years ago to our 15th anniversary and now here we are at 20 years and it just seems more special," Batausa said. "It's been 20 years now and we are still going strong and the race continues to grow. We've kept the same recipe which is having great volunteers, community support, and just displaying the overall hospitality that we are known for in this area."

The Road Runners Club receives help from over 700 volunteers from all around the region, including local fire departments, civic organization and businesses, law enforcement, the chamber of commerce, local churches and more.

According to a report prepared by the WVU Extension done in 2018, this event is number one in the region in terms of producing a meaningful economic impact. Runners and their families come from all over the world to spend a weekend in historic Hatfield and McCoy country.

The marathon itself weaves through Kentucky and West Virginia, taking you back in time through the history of the Hatfields and the McCoys.

Jeff Galloway, a member of the 1972 U.S. Olympic team and author of more than a dozen books on running, called the Hatfield-McCoy Marathon one of the toughest road marathons in the U.S., thanks to its challenging hills through the mountains of the Tug Fork river valley along the border between Kentucky and West Virginia in a review on the race for the Weather Channel.

The full marathon begins in Goody, Kentucky, in front of Food City. As the race begins, runners traverse through Hardee and over Blackberry Mountain until finally they cross the river into West Virginia in Matewan.

Runners start the race at about 675 feet elevation and reach 1,270 feet at the course's highest point - and 500 feet of that rise occurs within a single mile, near Blackberry Mountain between miles 6 and 7.

Runners continue on up Route 49 until they hit the golf course at the Tug Valley Country Club before they cross back over into Kentucky at Sprigg and continue through Burnwell and into Aflex.

Once runners exit from Aflex, they are on the home stretch, as the finish line is located on 2nd Avenue in downtown Williamson.

The many hills and rocky terrain is why the Hatfield and McCoy Marathon is considered one of the toughest in the world.

The full marathon and the Blackberry Mountain half begins at 7 a.m. while the River Road Half starts at 7:30 and the 5K will start at 7:45 a.m.

"We are very thankful for all our volunteers, the participants coming from around the world, our communities in our region working together, the sponsors, the Tug Valley Road Runners Club and everyone else involved in making this event amazing every year," Batausa said.

Vendors will be set up along the streets of downtown Williamson and are residents are invited to come watch and cheer the runners as they cross the finish line which could come any time after 9:30 a.m.

Jarrid McCormick is a sports reporter for the Williamson Daily News. He can be reached by email at jmccormick@HDMediaLLC.com.