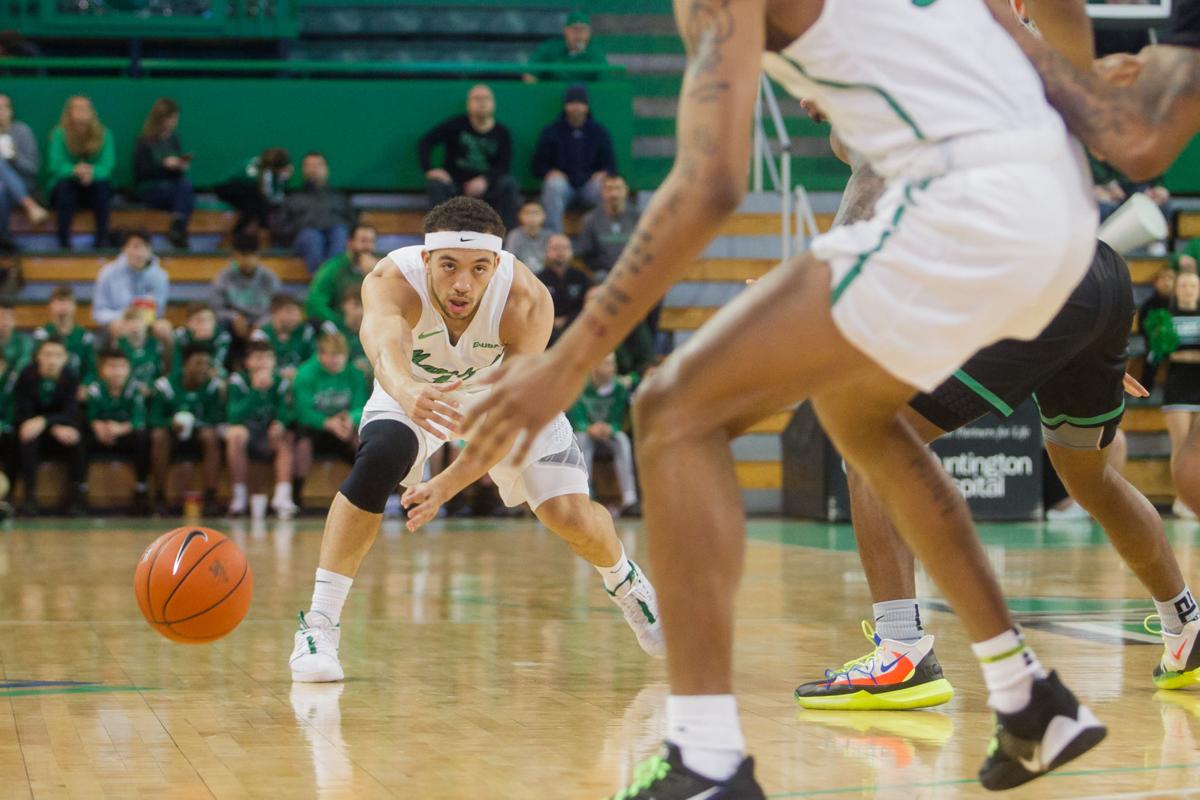 Marshall’s Jarrod West, left, passes the ball to Taevion Kinsey during a Conference USA men’s basketball game against North Texas on Saturday at the Cam Henderson Center in Huntington. 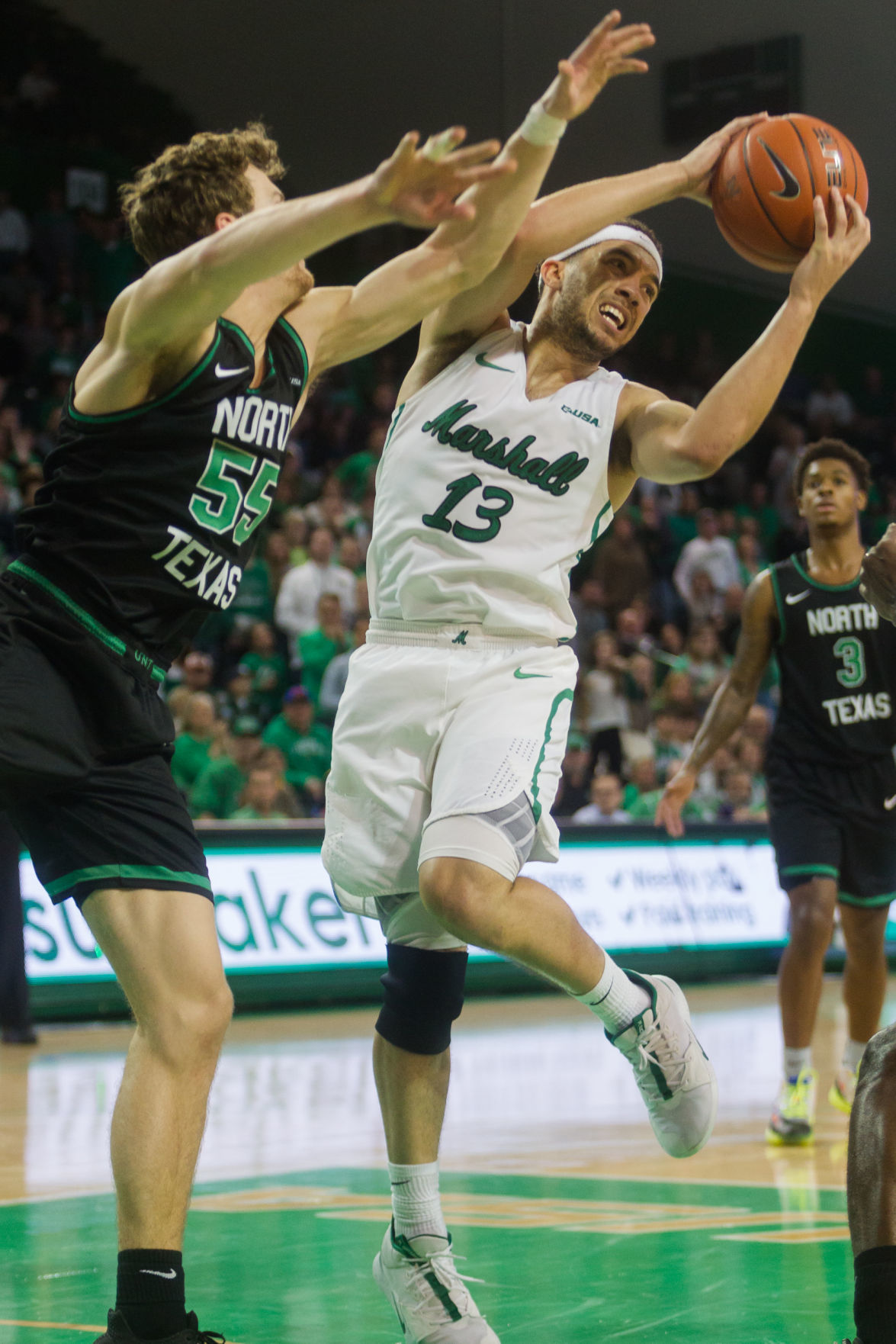 Marshall’s Jarrod West, left, passes the ball to Taevion Kinsey during a Conference USA men’s basketball game against North Texas on Saturday at the Cam Henderson Center in Huntington.

HUNTINGTON — Just when Marshall University’s men’s basketball team appeared to be on a roll, the Thundering Herd hit a Texas-sized road bump.

North Texas (7-8 overall, 1-1 Conference USA) outplayed Marshall (7-8, 1-1) in a 67-64 triumph Saturday in front of 5,489 spectators at Cam Henderson Center. The loss was disappointing for Marshall, which had won two in a row and five of its last six.

Trailing 65-64, Marshall had a chance to take the lead with 4.8 seconds left, but Andy Taylor’s inbounds pass for Iran Bennett was bobbled, deflected and stolen. The Mean Green’s Javion Hamlet was fouled and made both free throws to set the score.

Marshall’s final possession featured a length-of-the-court pass, but the Herd couldn’t position itself for a 3-point shot to tie.

D’Antoni said just as his young team, which features no seniors, is learning, he is discovering who can do what in certain situations.

“The one underneath is similar to the one we ran against Wichita State,” D’Antoni said of the play to Bennett that reminded him of one the Herd successfully ran in an 81-75 victory over the Shockers in the 2018 NCAA Tournament.

“The difference was, I didn’t get Iran out far enough,” D’Antoni said. “It was a bad angle for them to get the ball off a pick from Taevion (Kinsey). Now, he held on to the pick too long, but that’s an all-new situation. It’s new for me figuring out who’s going to score for us in that situation. It might be better that I clean it out and just see if Taevion can get a shot. I’m learning a lot who is going to score for us in these situations.”

The Herd wasted opportunities to win. Trailing 65-59 with 3:06 remaining, Marshall went on a 5-0 run to pull within 65-64 with 1:37 left. North Texas’ D.J. Draper then missed a 3-pointer from the right corner and the Herd rebounded. Jarrod West followed by missing a shot in traffic from the lane.

“Jarrod got stuck in the lane a little bit and took a real tough, contested shot,” D’Antoni said. “I know Jarrod wants to win, but we have to allow the offense to work a little bit and get a little cleaner look, either by him or somebody else. We kind of forced that one up a little bit instead of working the ball.”

North Texas senior forward Deng Geu allowed Marshall another chance when he missed two free throws with 14 seconds left. Kinsey drove the baseline left of the basket, but had his shot blocked out of bounds with 7.4 seconds left. After a timeout, D’Antoni set up the play to Bennett, but Marshall couldn’t convert, committing the last of its 17 turnovers.

Kinsey, who led Marshall with 19 points, said it wasn’t the late-game play that cost the Herd but its early mistakes when it lost a nine-point lead.

“I think it was on us,” Kinsey said. “We turned the ball over early and let them back in the game. We had too many careless turnovers. That’s something we have to fix. That’s been a main thing in every game, really. A lot of close, big games that we’ve lost it’s been mainly because of turnovers.”

“We have to calm down in certain situations,” Kinsey said. “We saw open guys and wanted to make cross-court passes, things like that. The passes are open, but sometimes we don’t put enough juice on the pass or it’s a careless pass.”

North Texas also played handsy, disruptive defense that didn’t let Marshall get into a flow after the first seven minutes.

“It was real frustrating,” Kinsey said. “We were right there at the end. It’s basketball. Sometimes it doesn’t go your way. We can’t blame our guys. It’s a team thing. We can’t blame any one guy. It’s a team effort, not any one individual’s fault. I believe in us. We’re going to get better.”

Cam Brooks-Harris scored 11 for the Herd.

The Marshall University men's basketball team faces off with North Texas on Saturday, January 4, 2020, at the Cam Henderson Center in Huntington.