Sign Up
Log In
Purchase a Subscription
You are the owner of this article.
Edit Article Add New Article
You have permission to edit this article.
Edit
Welcome, Guest
Home
News
Sports
Features
Photos
Opinion
Obituaries
Classifieds
Legals
e-Edition
1 of 5 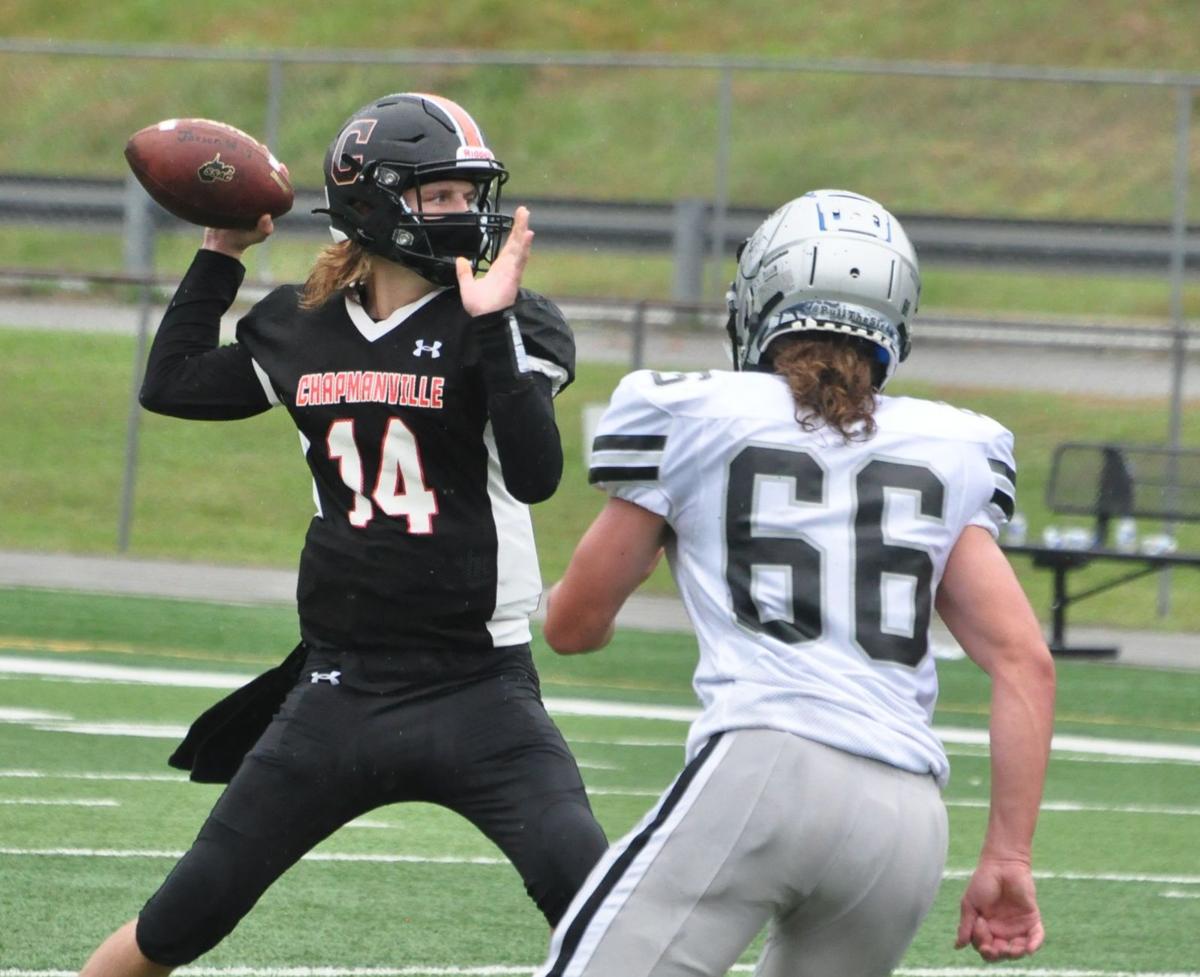 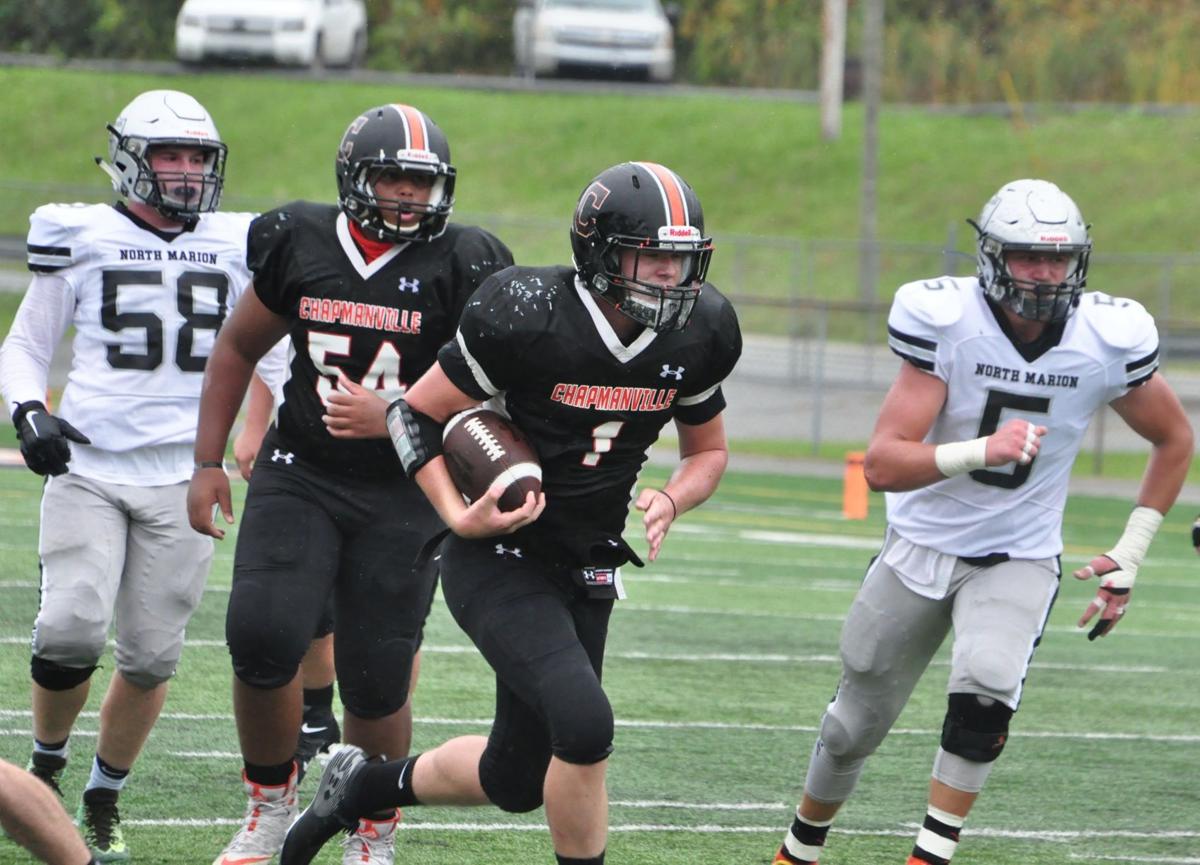 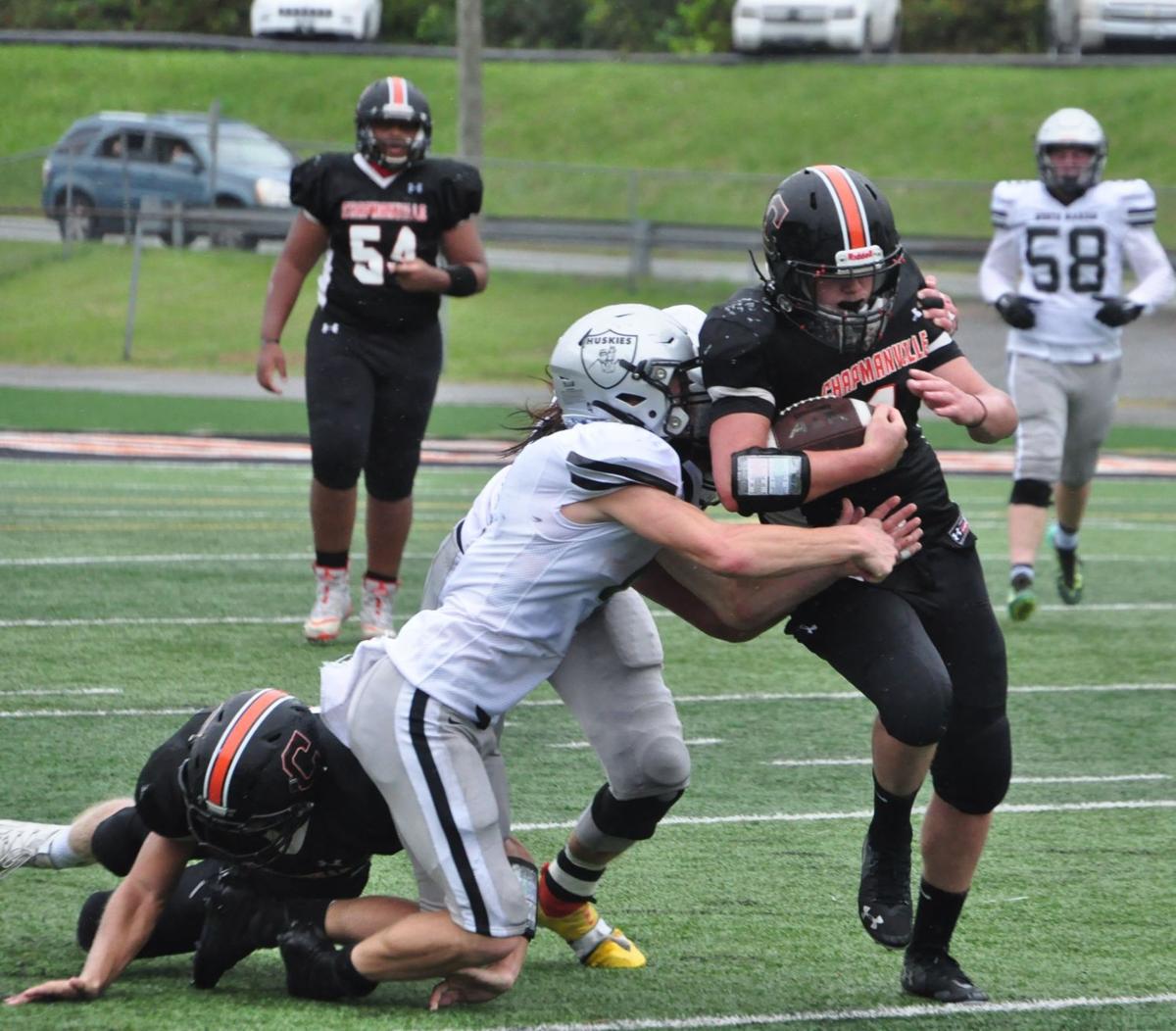 Chapmanville Regional High School’s Caleb Whitt is tackled in the Tigers’ 43-0 loss to North Marion on Saturday at Chapmanville. 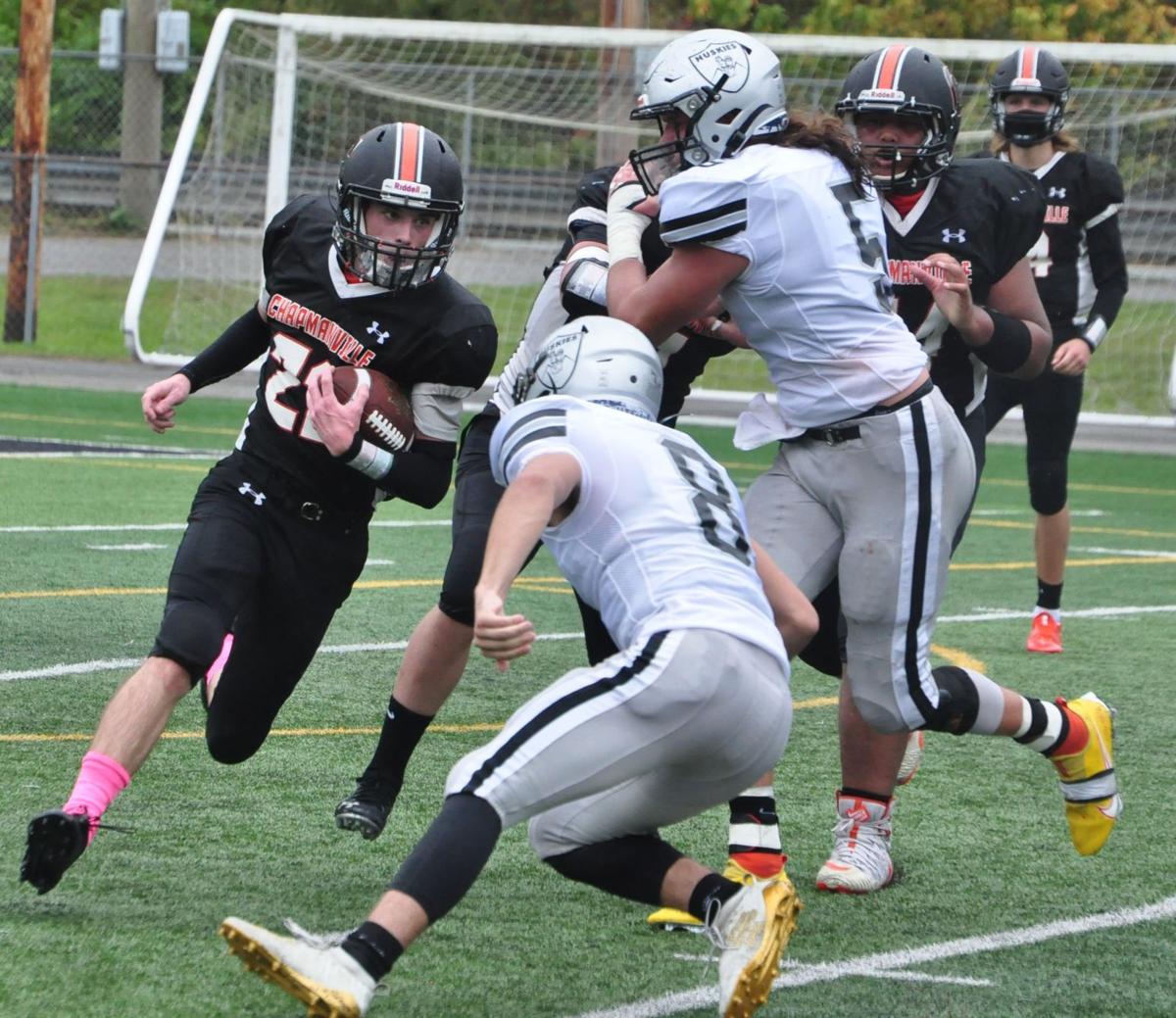 Chapmanville Regional High School punter David Peluso runs with the ball after a muffed punt in the Tigers’ 43-0 loss to North Marion on Saturday at Chapmanville. 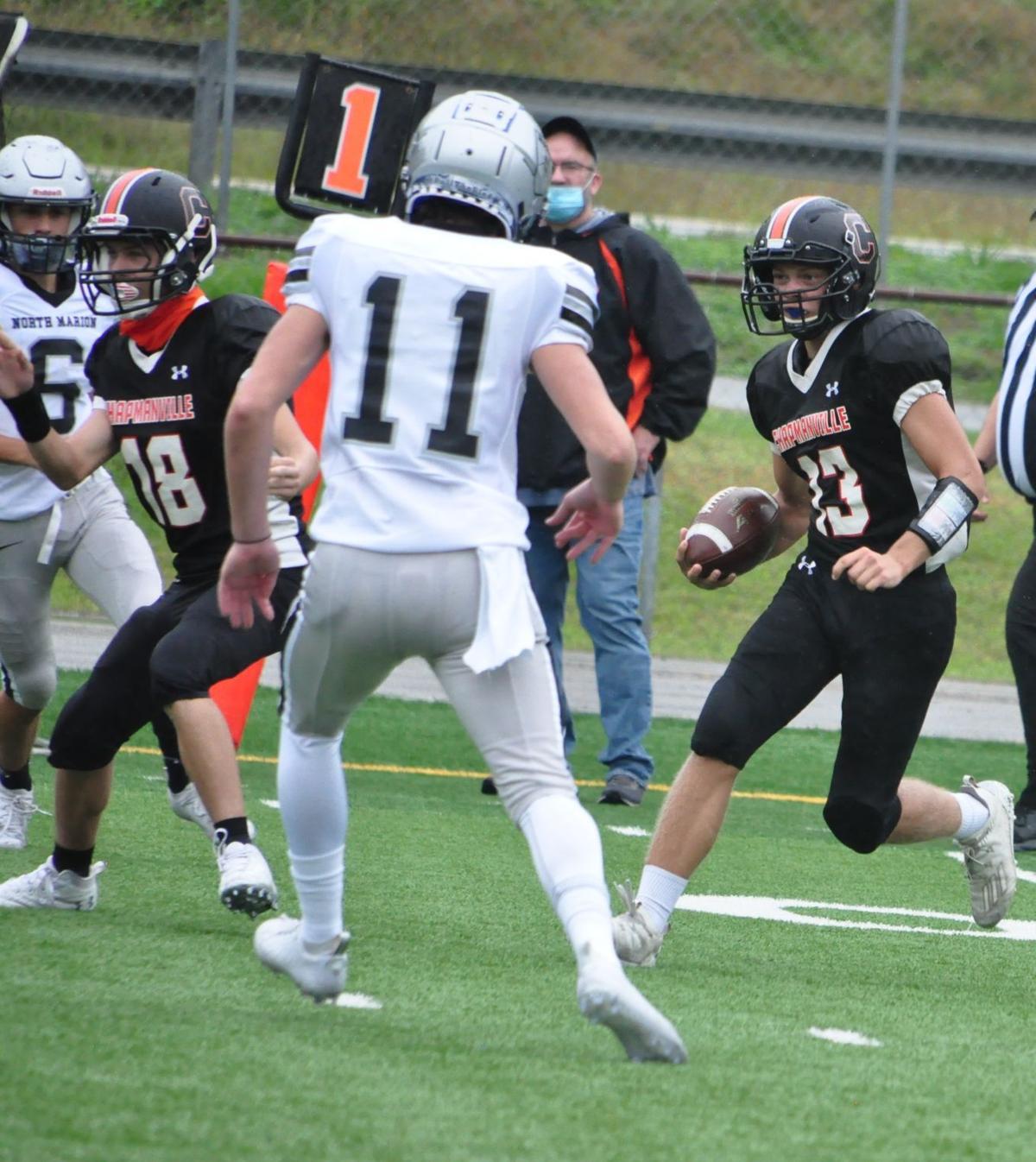 Paul Adkins | The Logan Banner Chapmanville Regional High School's Fred Miller (13) runs with the ball on a kickoff return in the Tigers' 43-0 loss to North Marion on Saturday, Oct. 10, 2020 at Chapmanville.

Chapmanville Regional High School’s Caleb Whitt is tackled in the Tigers’ 43-0 loss to North Marion on Saturday at Chapmanville.

Chapmanville Regional High School punter David Peluso runs with the ball after a muffed punt in the Tigers’ 43-0 loss to North Marion on Saturday at Chapmanville.

Paul Adkins | The Logan Banner Chapmanville Regional High School's Fred Miller (13) runs with the ball on a kickoff return in the Tigers' 43-0 loss to North Marion on Saturday, Oct. 10, 2020 at Chapmanville.

CHAPMANVILLE — Miscues and turnovers are often a killer for football teams at any level.

The Chapmanville Regional High School Tigers found that out on Saturday afternoon as CRHS was shut out 43-0 by Class AA No. 8-ranked North Marion at a rainy Tiger Stadium in Chapmanville.

A fumble and two special teams blunders in the second quarter by Chapmanville turned an otherwise competitive game into a blowout.

Chapmanville, playing just its second game of the season, fell to 1-1 on the season. North Marion made the three and a half hour trip a good one as the Huskies improved to 3-1.

The game was added to the schedule early in the season as each teams filled open dates. It was originally set to be played on Friday night but was moved to Saturday afternoon.

The Tigers came into the game ranked No. 6 in the state.

Chapmanville was short-handed, playing the game without five starters and three other players, including starting running back Jaxson Turner.

“The special teams issues were an issue of our lack of depth and practice, again, those are things I can control and we will get better at.”

North Marion led just 7-0 after the first quarter and 14-0 in the second and the game remained competitive.

Then the floodgates opened on the Tigers.

Facing a fourth-and-14 on its own 14, Chapmanville was forced to kick the ball away but a muffed punt by the Tigers’ David Peluso after a bad snap gave the Huskies the ball at the 13.

Then on the very next snap, North Marion’s Tariq Miller ran in from 13 yards out with 3:45 left until halftime. The Huskies then faked the PAT and kicker Malachi Funkhouser was able to fire a strike to Derek Miller in the end zone for a successful two-point conversion as North Marion led 22-0.

Chapmanville then fumbled the ball away three plays later giving the Huskies the ball at the CRHS 37-yard line.

Then, on the very next snap, and after a Huskies’ penalty, North Marion quarterback Brody Hall raced into the end zone on a 37-yard keeper. The extra point kick was good as the Huskies expanded their lead to 29-0 with 2:05 left until halftime.

Disaster then struck again for the Tigers four plays later as a squibbed punt by Peluso was scooped up by Cody Clevenger for a 16-yard touchdown. Funkhouser tacked on the PAT and North Marion held a commanding 36-0 lead with 53 seconds left until halftime.

But the Huskies would score one more time with 5:45 left in the third as Parker Kincell scored on an 8-yard TD run to make it 43-0.

The fourth quarter was played on a running clock and went swiftly.

The Tigers had some scoring opportunities early on.

North Marion turned the ball over on a fumble on its next drive and Chapmanville was able to take it into the red zone.

On a fourth-and-seven play at the North Marion 20, a pass interference by the Huskies gave CRHS a first-and-goal at the 10.

The Tigers could not score, however. After a 1-yard gain by Cody Whitt and two incomplete passes by QB Brody Dalton, Chapmanville had a fourth-and-goal at the 9. Dalton’s pass was then intercepted buy Hunter Kuhn in the end zone for a touch back.

Kuhn put North Marion on the board with 1:22 left in the opening quarter on a 1-yard TD plunge as the Huskies led 7-0.

Chapmanville was in business again on its next drive after a 46-yard run by Whitt to the Huskies’ 15-yard line.

Later, however, Dalton’s fourth-and-nine pass at the 14 fell to the turf incomplete.

Despite the miscues, Barker said the Tigers showed some flashes.

“We were close to turning the corner today and had a lot of positive plays and players in those first 18 minutes today. We just have to show up on Monday and decide if we want to build on the positives, or dwell on the negatives,” he said.

Whitt finished the game with 17 carries for 70 net yards. He also caught a pass of passes for 35 yards.

Josh Atwood ran with the ball six times for 46 yards.

Evan Plumley and Lambert each had a pair of tackles and two assisted stops.

Whitt, Smith, Dalton and Jacob Topping each had two solos and one assist. Dalton also had a caused fumble.

James Stevens and Caden Robinson each had two tackles.

Charles Stallard, Nate Walsh and Daniel Atwood had one tackle and one assist apiece. Caleb White a tackle.

North Marion was penalized four times for 30 yards. CRHS was only flagged once and it was declined.

Chapmanville is scheduled to see Cardinal Conference action on Friday night at Wayne.

Both Logan and Wayne counties were yellow this week on the state’s color-coded map and cleared to play.