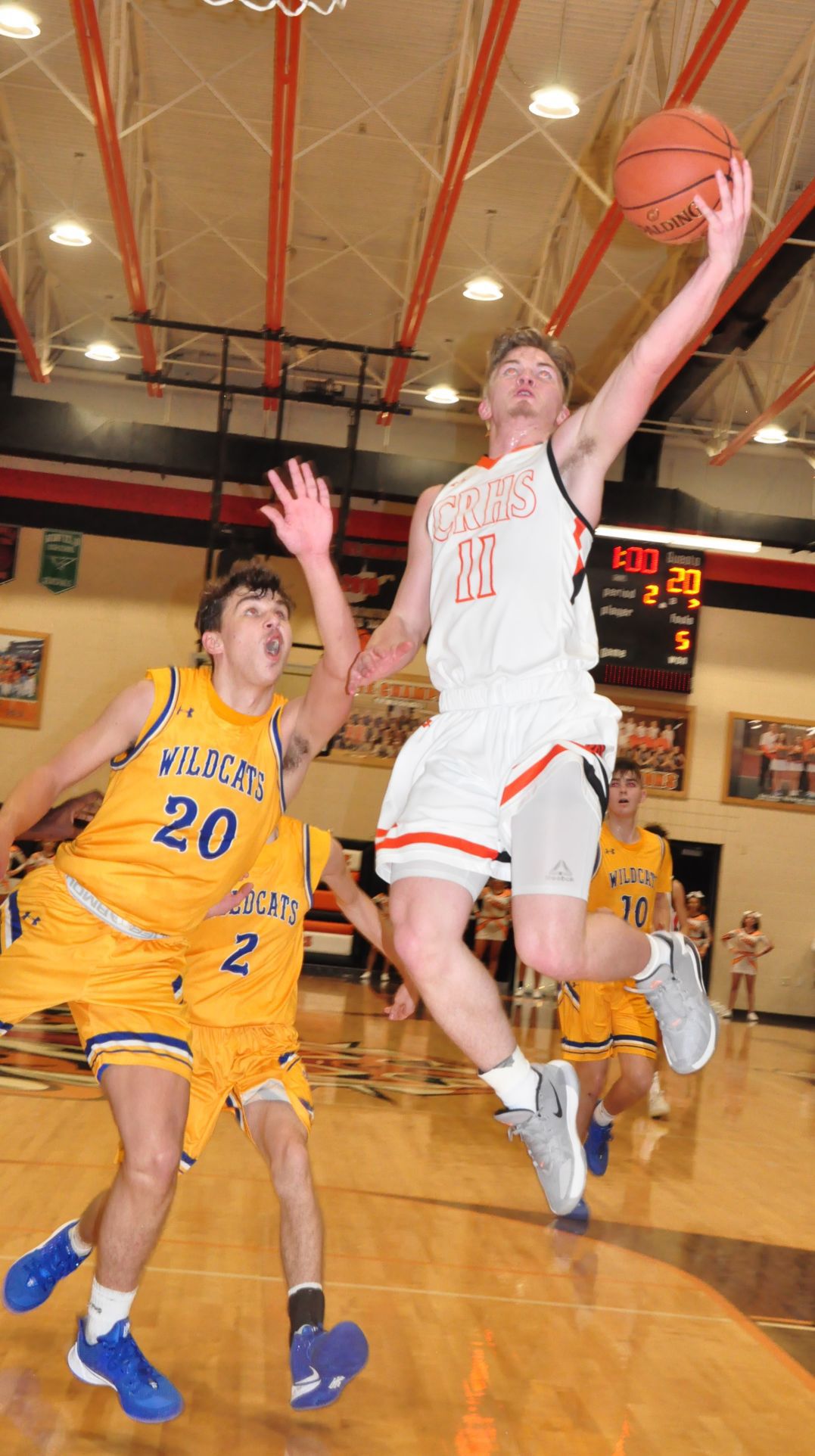 Paul Adkins/The Logan Banner Chapmanville Regional High School’s Andrew Shull flies into the lane for two points in the Tigers’ 60-55 win over the Wildcats on Tuesday, Feb. 4, 2020 at Chapmanville. 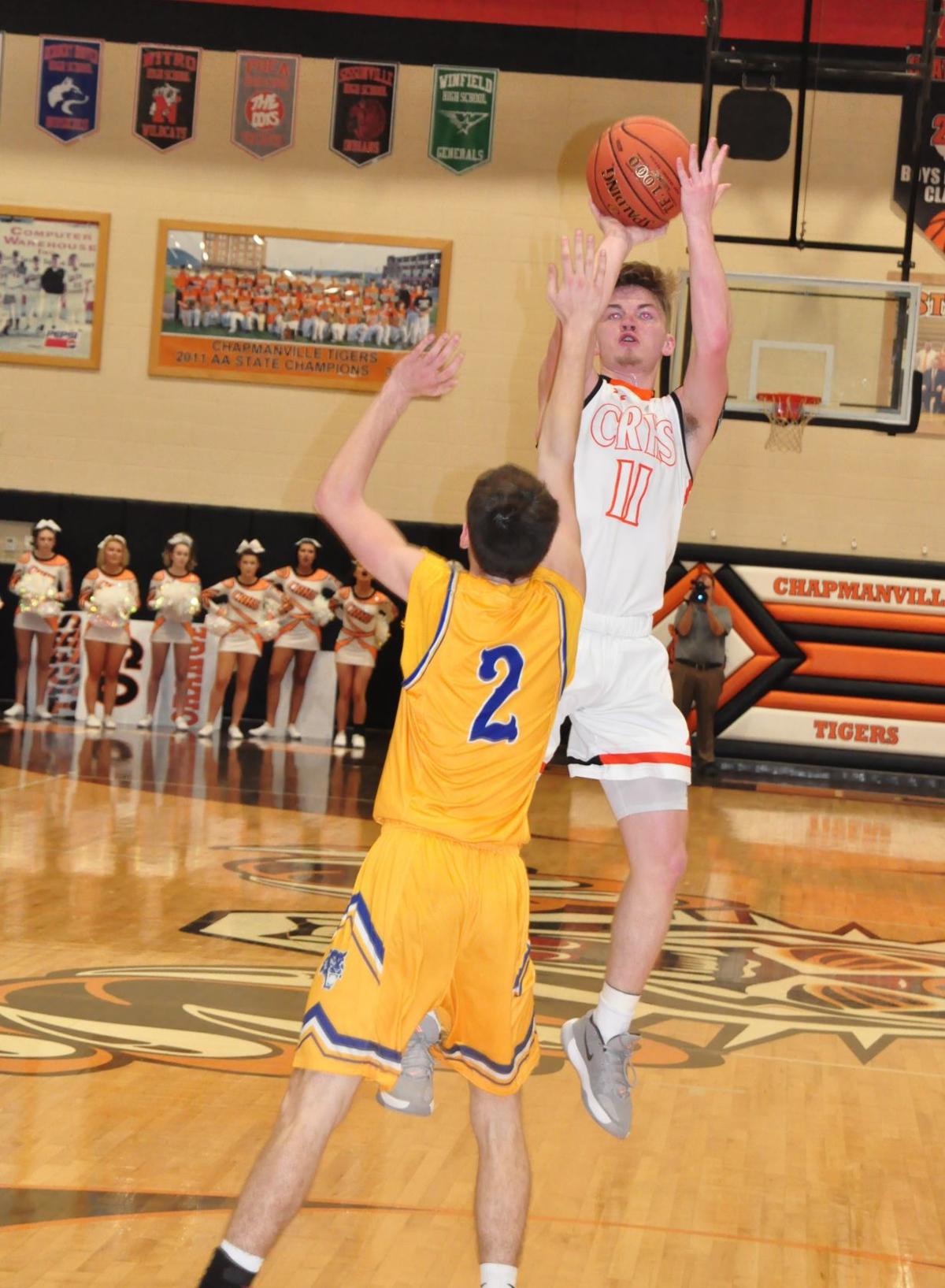 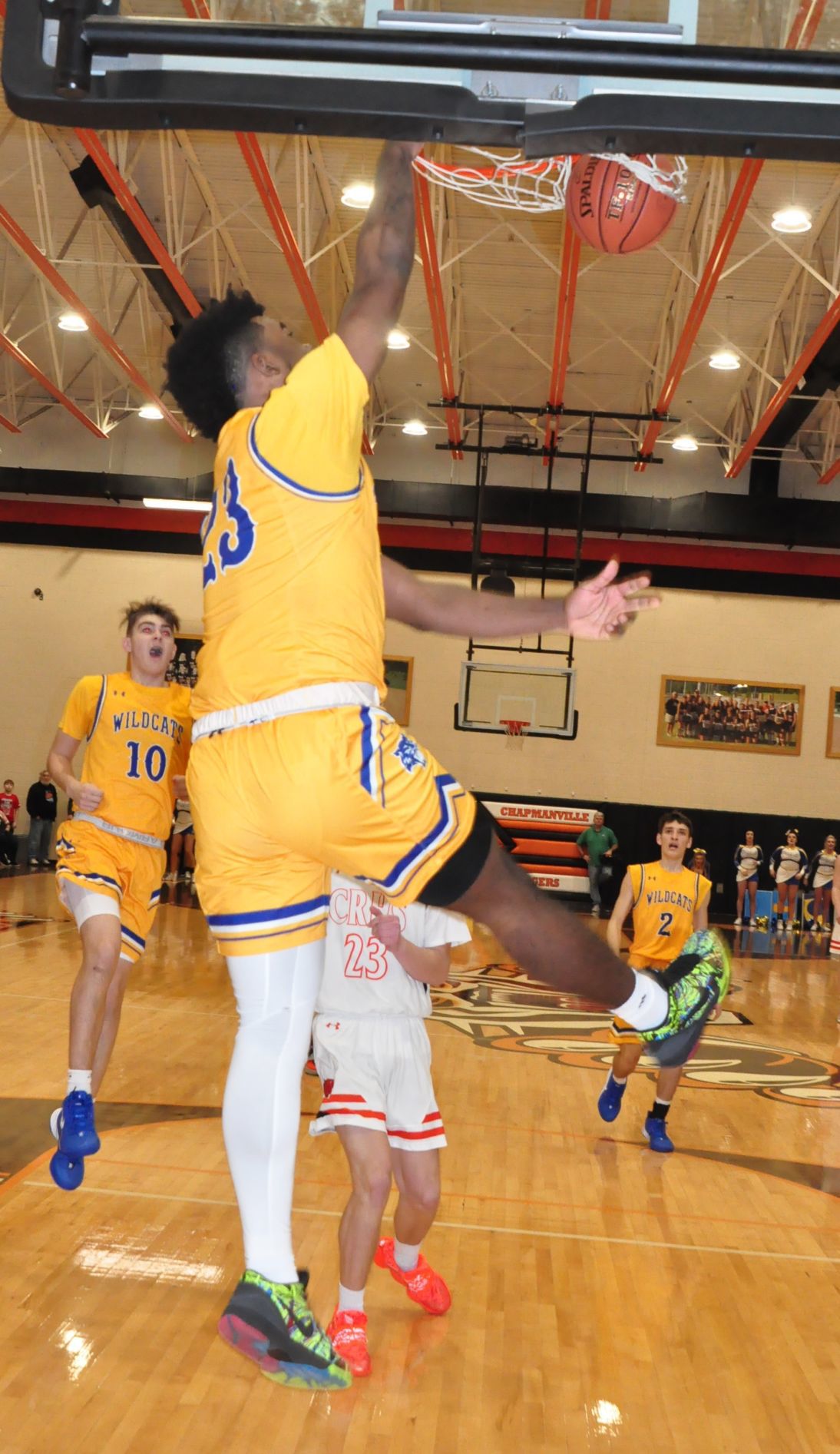 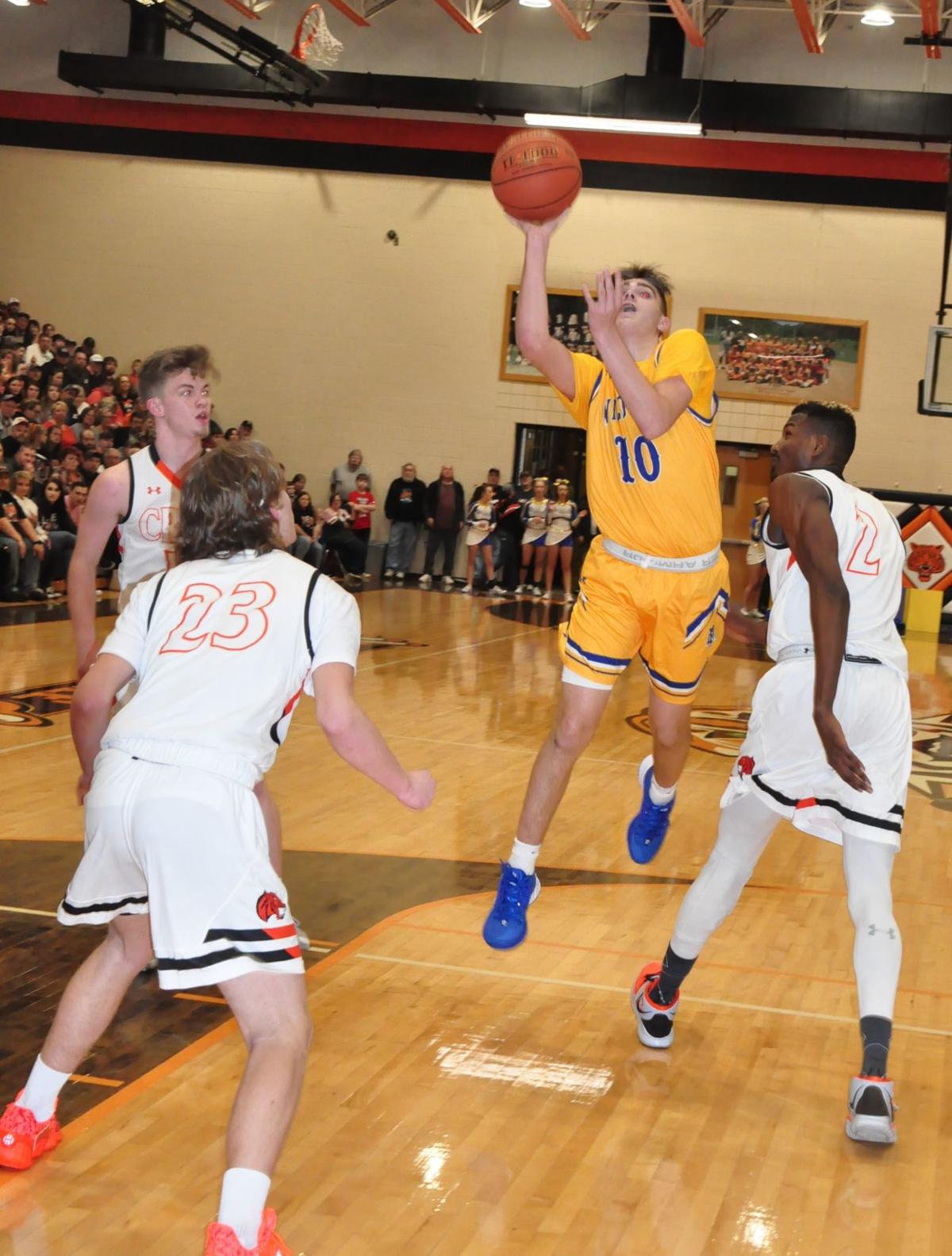 Logan’s Garrett Williamson puts up a shot in the Wildcats’ 60-55 loss at Chapmanville on Feb. 4. 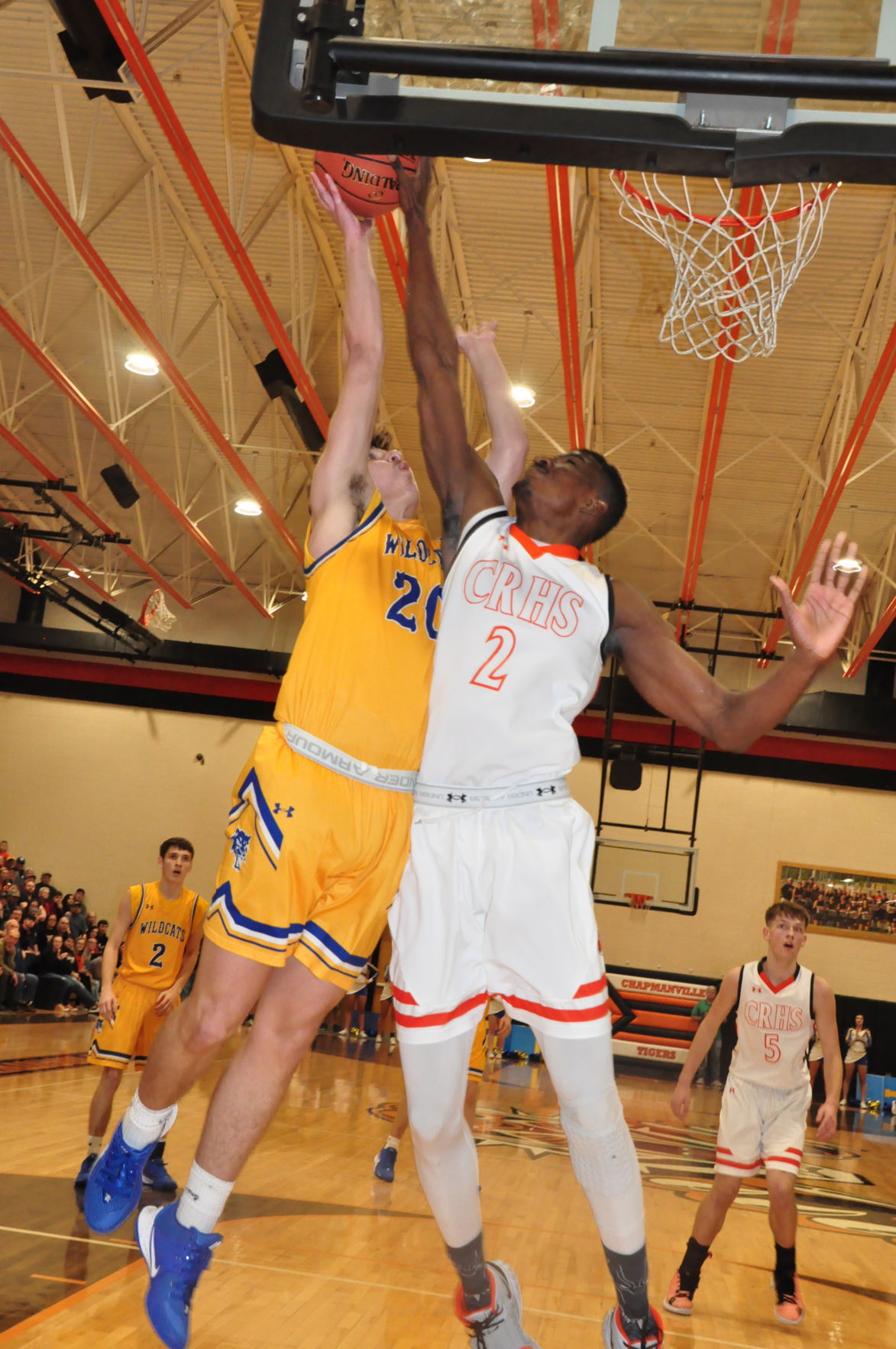 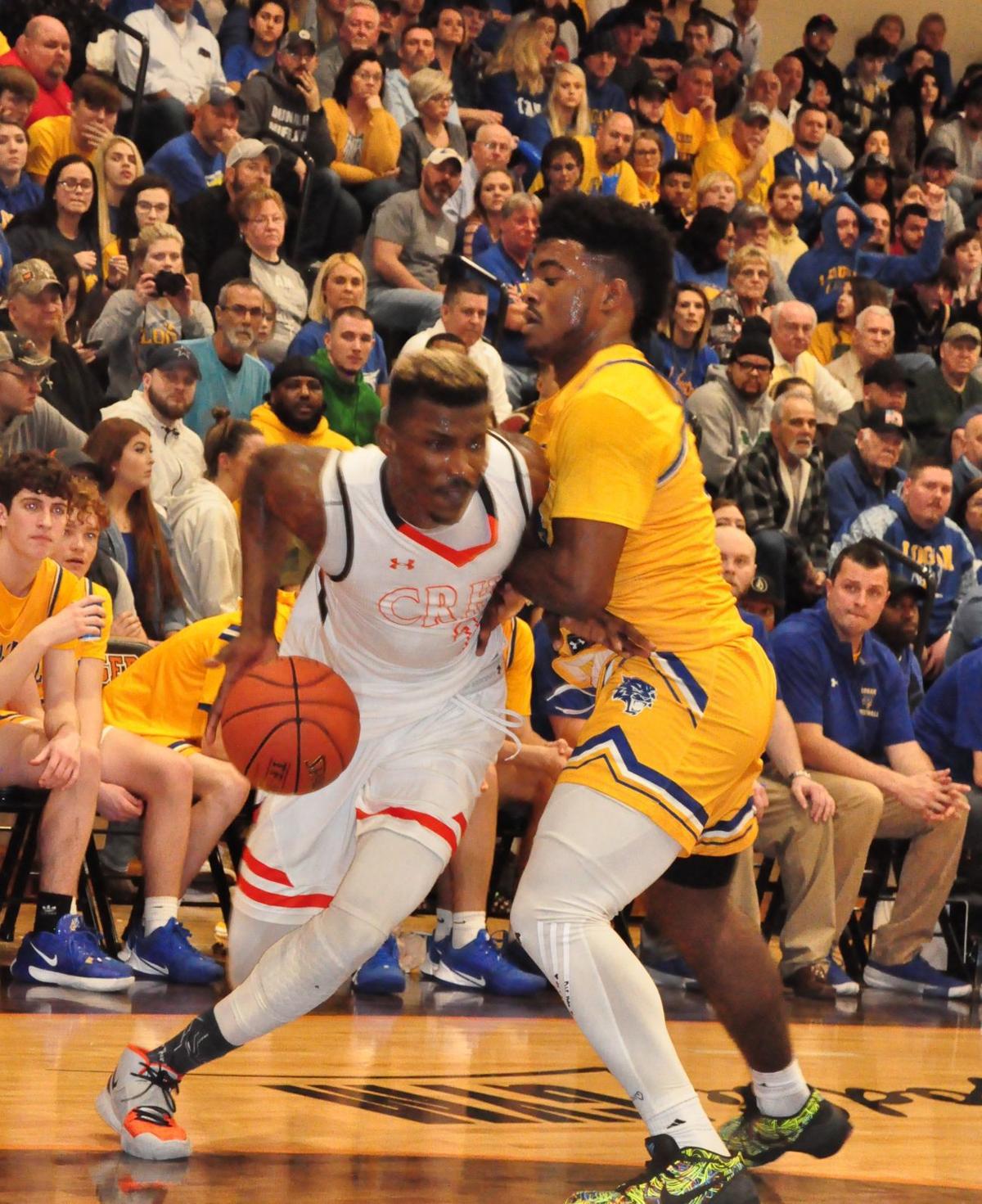 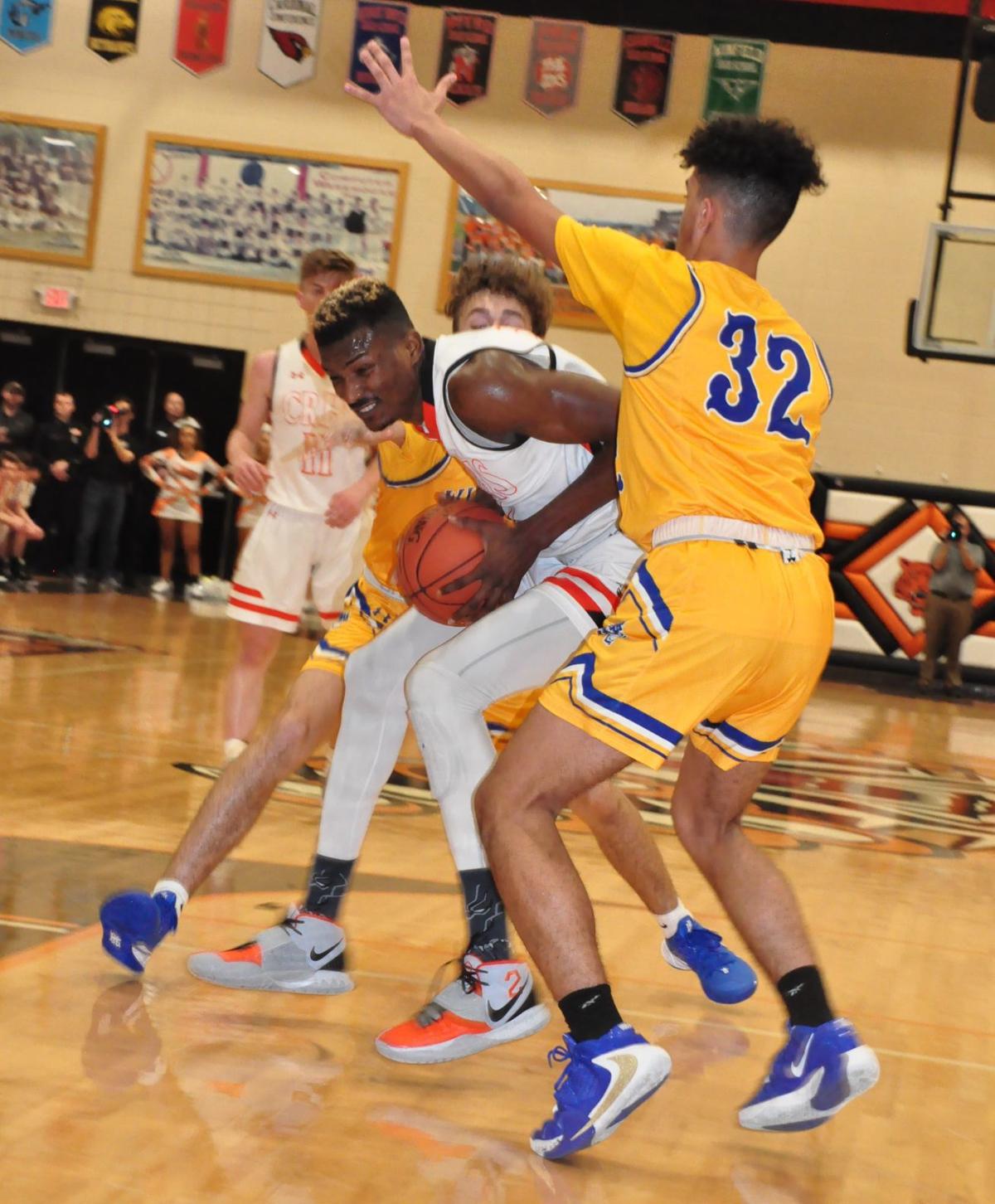 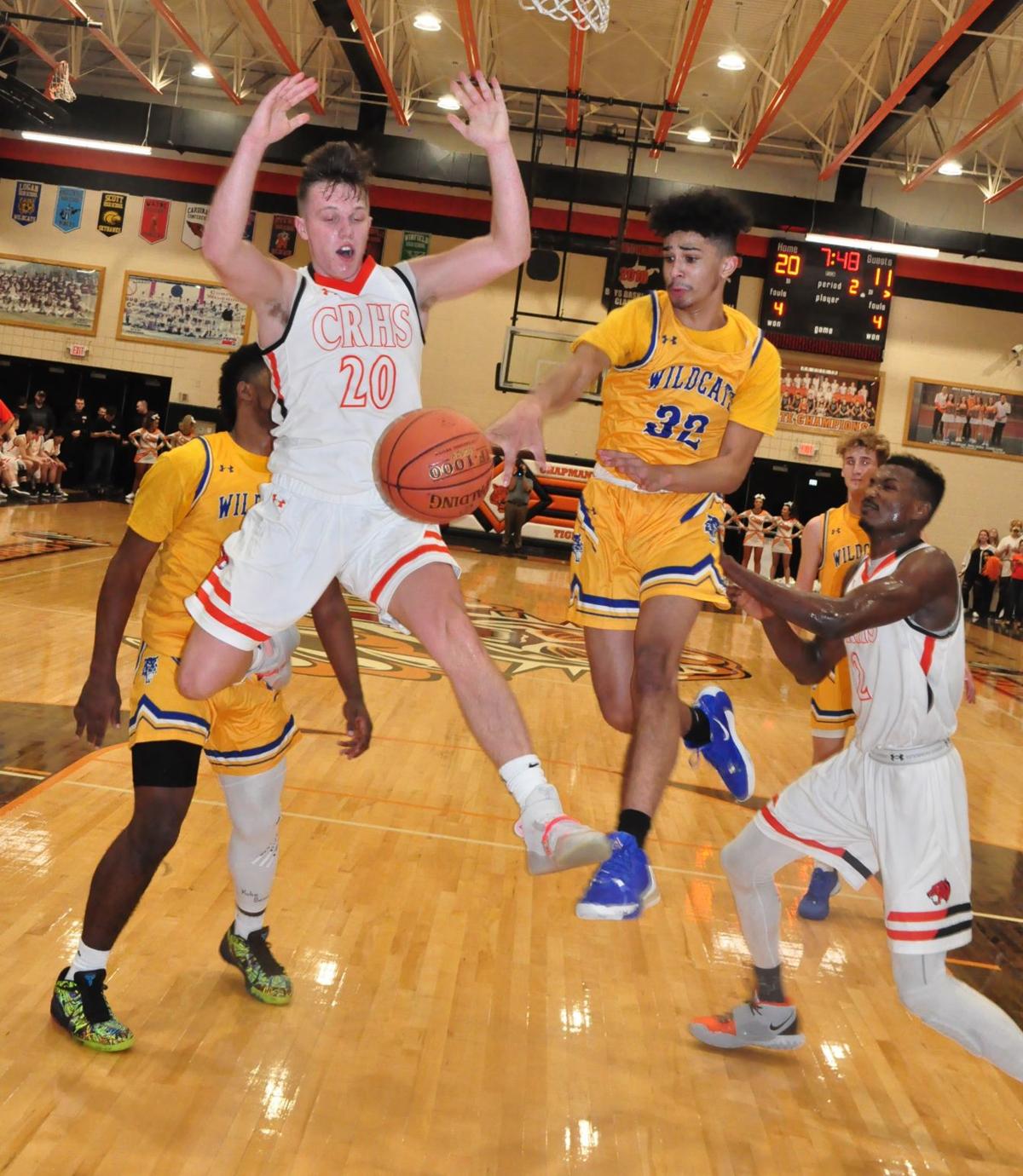 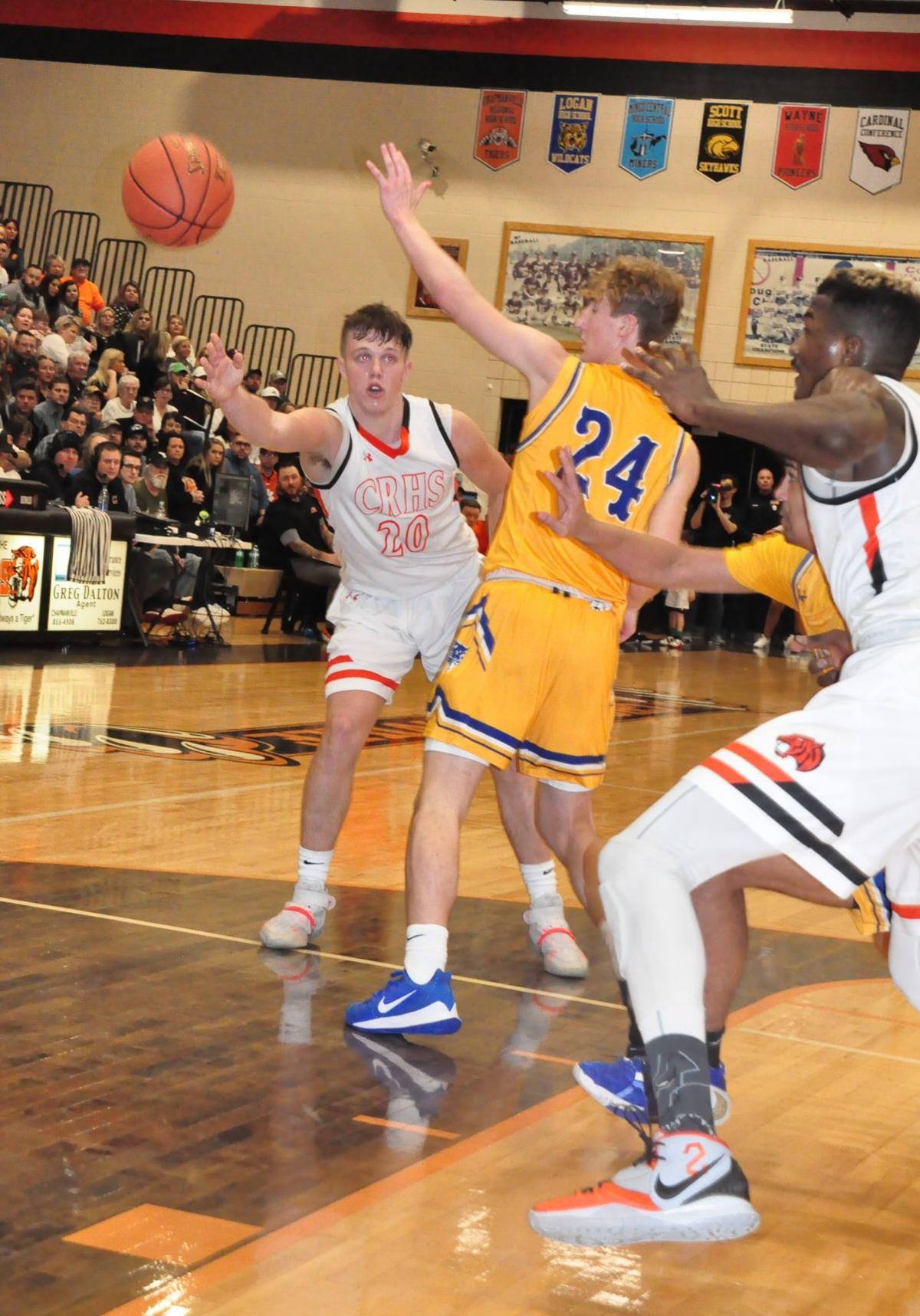 Paul Adkins/The Logan Banner Chapmanville Regional High School’s Andrew Shull flies into the lane for two points in the Tigers’ 60-55 win over the Wildcats on Tuesday, Feb. 4, 2020 at Chapmanville.

Logan’s Garrett Williamson puts up a shot in the Wildcats’ 60-55 loss at Chapmanville on Feb. 4.

CHAPMANVILLE — There was a lot on the line on Tuesday night in the big clash between county rival Logan and Chapmanville at Chapmanville Regional High School’s Danny Godby Gymnasium.

Class AA No. 2-ranked Chapmanville came away with a 60-55 win over No. 4 Logan before a jam-packed crowd.

But more than just county bragging rights and revenge were on the line.

The Tigers did, however, gain a measure of revenge from last month’s 72-61 loss at Logan in a game, which ended Chapmanville’s 54-game in-state winning streak going back three seasons.

The big picture was also in the spotlight.

With the win over the Wildcats and gaining a season series split, the Tigers hope that was enough to nail down the No. 1 seed for the upcoming Class AA Region 4 Section 2 tournament.

Chapmanville improved to 15-2 overall, 7-1 in the Cardinal Conference and, most importantly, 3-1 in games against sectional opponents.

The Tigers still have a pair of big games ahead against sectional foes as Chapmanville plays at No. 12-ranked Mingo Central on Feb. 11 and hosts No. 10 Scott on Feb. 18, so a lot of basketball is yet to be played. CRHS defeated Mingo Central (69-45) and Scott (52-51) earlier in the season.

With Tuesday’s loss, Logan suffered its first defeat to a sectional team this season. Logan, at 5-1 in sectional play, take on Scott on Friday at home and host Man on Feb. 14, also at home. Logan dropped to 10-7 overall and 7-2 in the conference. Logan actually has a 12-5 on-court record, not counting the two games in Tennessee the Wildcats were forced to forfeit.

Chapmanville is looking for its fifth straight sectional title. The Tigers have defeated Logan in each of the last two sectional championship games atop Miner Mountain. Barring any upsets, Chapmanville and Logan could potentially meet a third time, and for a third straight matchup, in this year’s sectional finals.

Chapmanville coach Brad Napier said a lot of basketball is yet to be played but acknowledged the significance of Tuesday’s win.

“We still have a lot of games left,” he said. “There’s a lot of things that are still being determined but this game was a big game as far as seeding purposes. It was also a big game in the Cardinal Conference. That puts us in first place in the conference right now. We’re trying to win another Cardinal Conference championship. I don’t think anyone has ever won four in a row.”

Chapmanville won despite Obinna Anochili-Killen only scoring eight points. He was reportedly feeling ill and did not play in the second half.

Philip Mullins led Chapmanville with 16 points. Andrew Shull had 14, while Isaiah Smith and Hunter Jeffrey had nine each. Chase Berry finished with four points off the bench. All of Smith’s points came on a trio of 3-pointers.

Jeffrey scored eight out of his nine points in the decisive fourth quarter.

Napier said it was nice to see others step up as Killen sat out the second half.

“Obinna was dehydrated,” Napier said. “He went to the hospital and got four bags of fluids. We had a lot of guys contribute and step up. Isaiah Smith was 3 for 5 from the 3-point line. Hunter Jeffrey was big in the fourth quarter. He also did a great job with his offensive rebounding. Chase Berry I thought played really well as did Brody Dalton. He helped handle the ball a lot when Logan was pressing us. Those young guys all stepped up.”

Napier said the more players contribute outside of the “Big Three” of Killen, Mullins and Shull the better the Tigers will be in the stretch drive of the season and in Chapmanville’s quest for a state title 3-peat.

“We are playing a bunch of freshmen and sophomores,” Napier said. “And even Chase, who is a senior, this is his first year of playing basketball. He’s almost like a young guy as well. All of those guys are young and they’ve gotten better. The last few games they’ve come into their own and are taking big shots in pressure situations.”

Marshall coach Dan D’Antoni was in the crowd to watch his two new Thundering Herd recruits, Early and Killen.

The Tigers led 40-35 after three quarters and held on for the win.

Logan eventually tied the game at 49 in the fourth quarter with Early’s drive down the lane. It was 51-all as Hensley scored on a feed from Early.

Chapmanville then pulled ahead with a free throw. Shull then netted a pair of free throws to make it 54-51 with 1:12 left.

Early then closed it to 58-55 with 23.6 ticks to go as Early connected on two free throws.

Mullins then split from the foul line on two trips, putting the game away in the closing seconds.

The Tigers held a 20-8 lead late in the first quarter but it was Glick who trained a 3 at the buzzer, closing the gap to 20-8.

Logan led 4-0 early in the game as Early put down a dunk.

In the second quarter, Early threw down a driving one-handed slam as the Wildcats trailed 23-20 with 2:40 to go until halftime.

Mullins then connected on a 3-ball and Shull scored on a layup as the Tigers led 28-20 at the intermission.

The Tigers led by as many as 16 points in the third quarter as a Berry layup gave Chapmanville a 38-22 lead.

Chapmanville made it a sweep, also beating Logan, 62-59, in the JV game before the capacity crowd.

A moment of silence was offered before the game to honor former Chapmanville baseball coach Ted Ellis, who passed away last week at the age of 79.

Chapmanville returns to action with the Feb. 11 game at Mingo Central. The Tigers then play at Herbert Hoover on Feb. 14.

Logan hosts Scott on Friday night then goes to Poca on Feb. 11. The Cats host Man on Feb. 14 and then hosts Winfield on Feb. 15. The season finale is Feb. 21 at home against Sissonville.