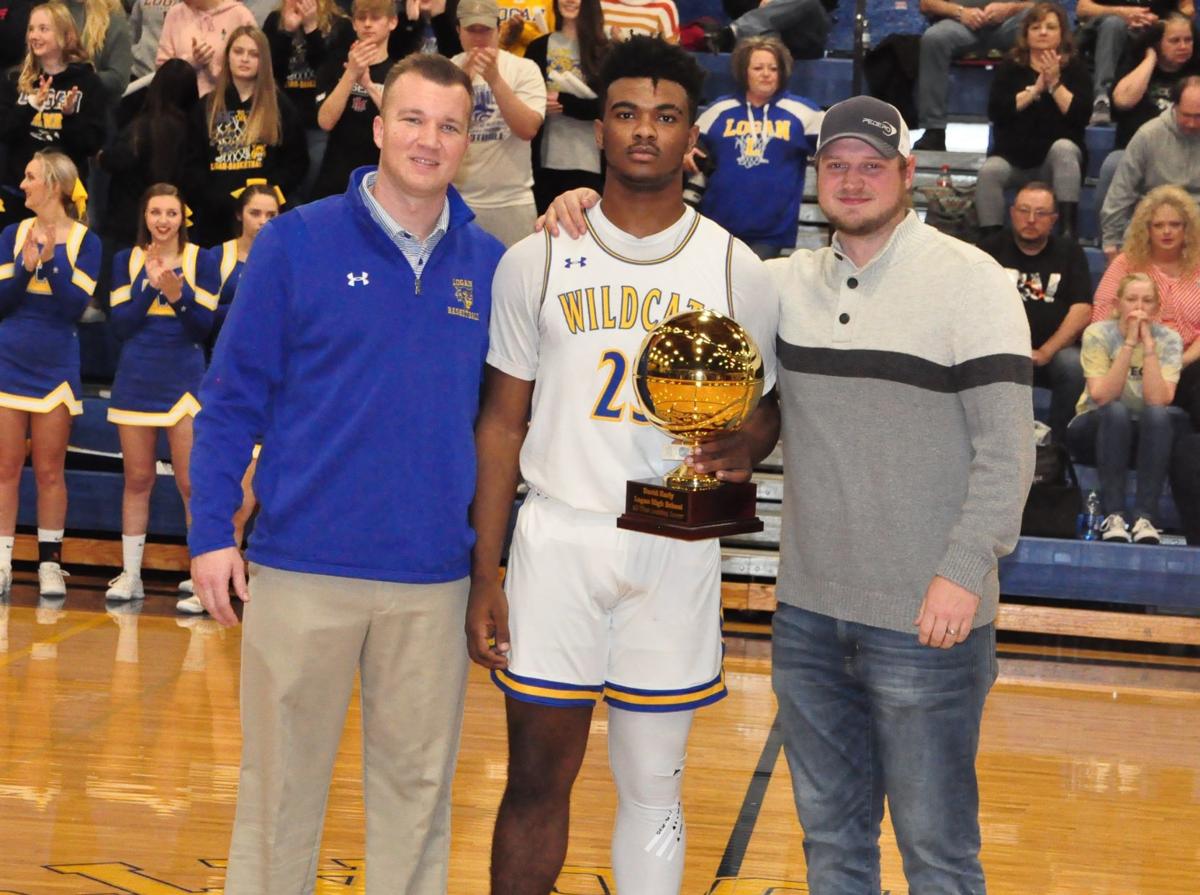 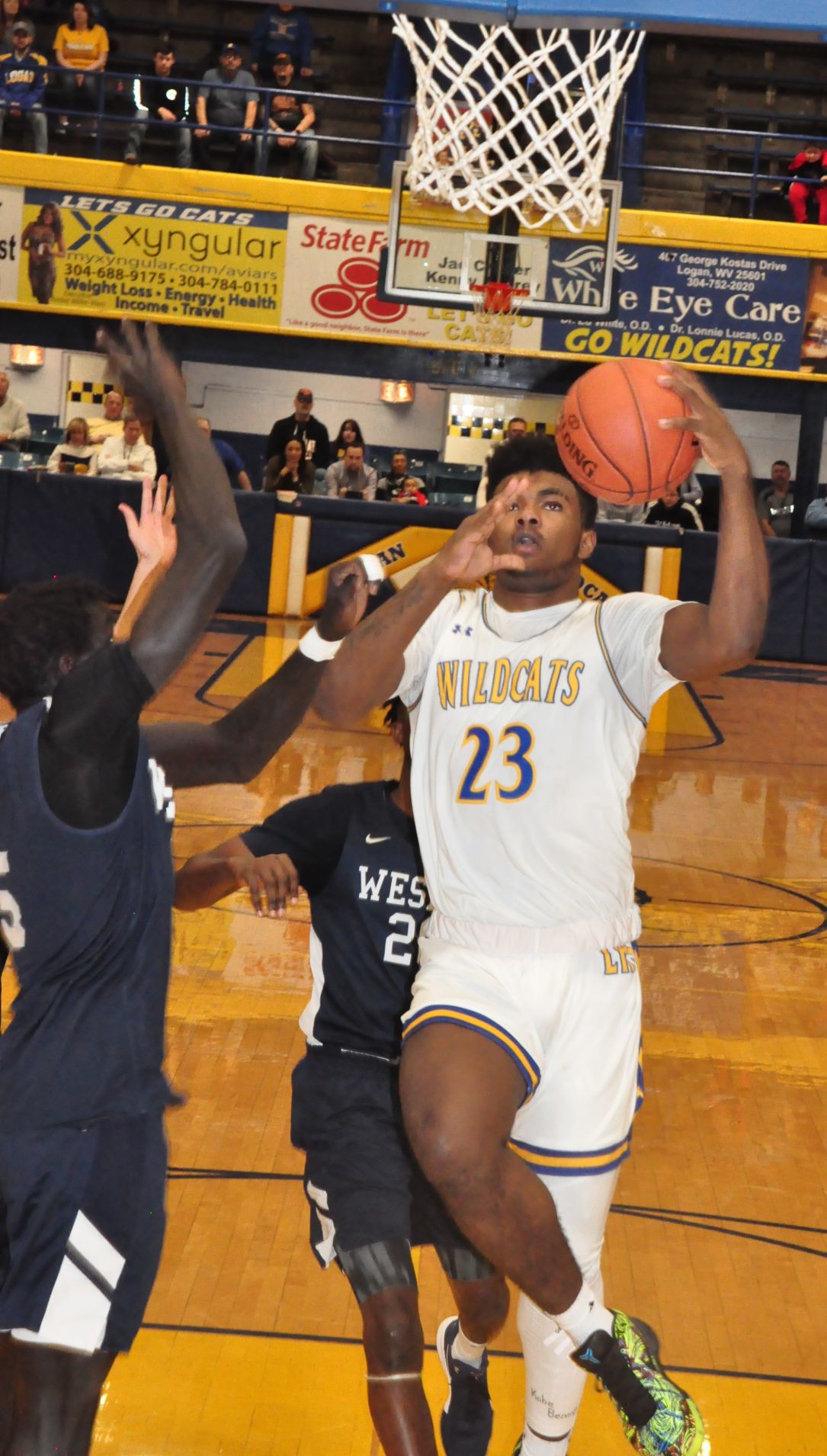 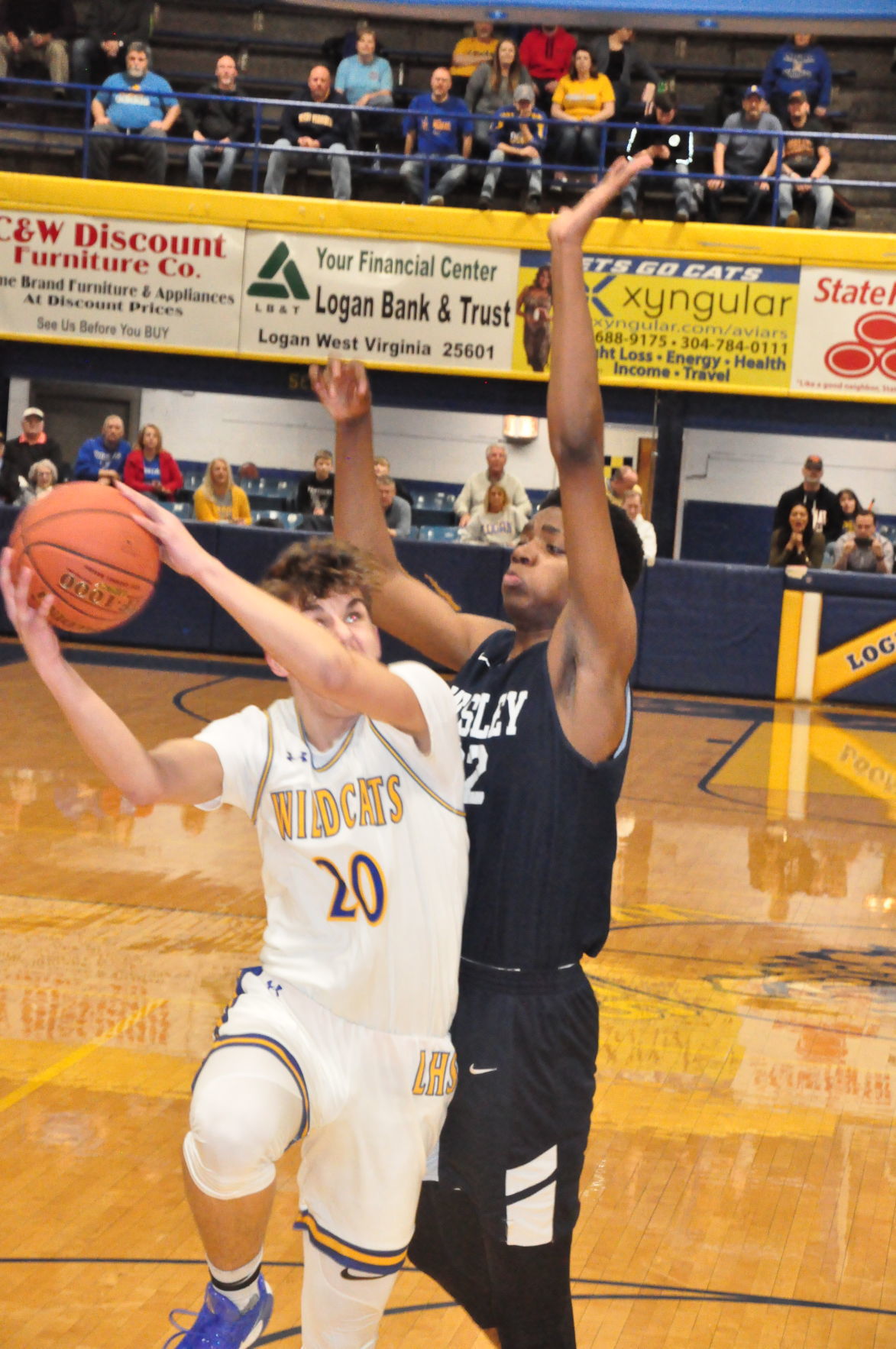 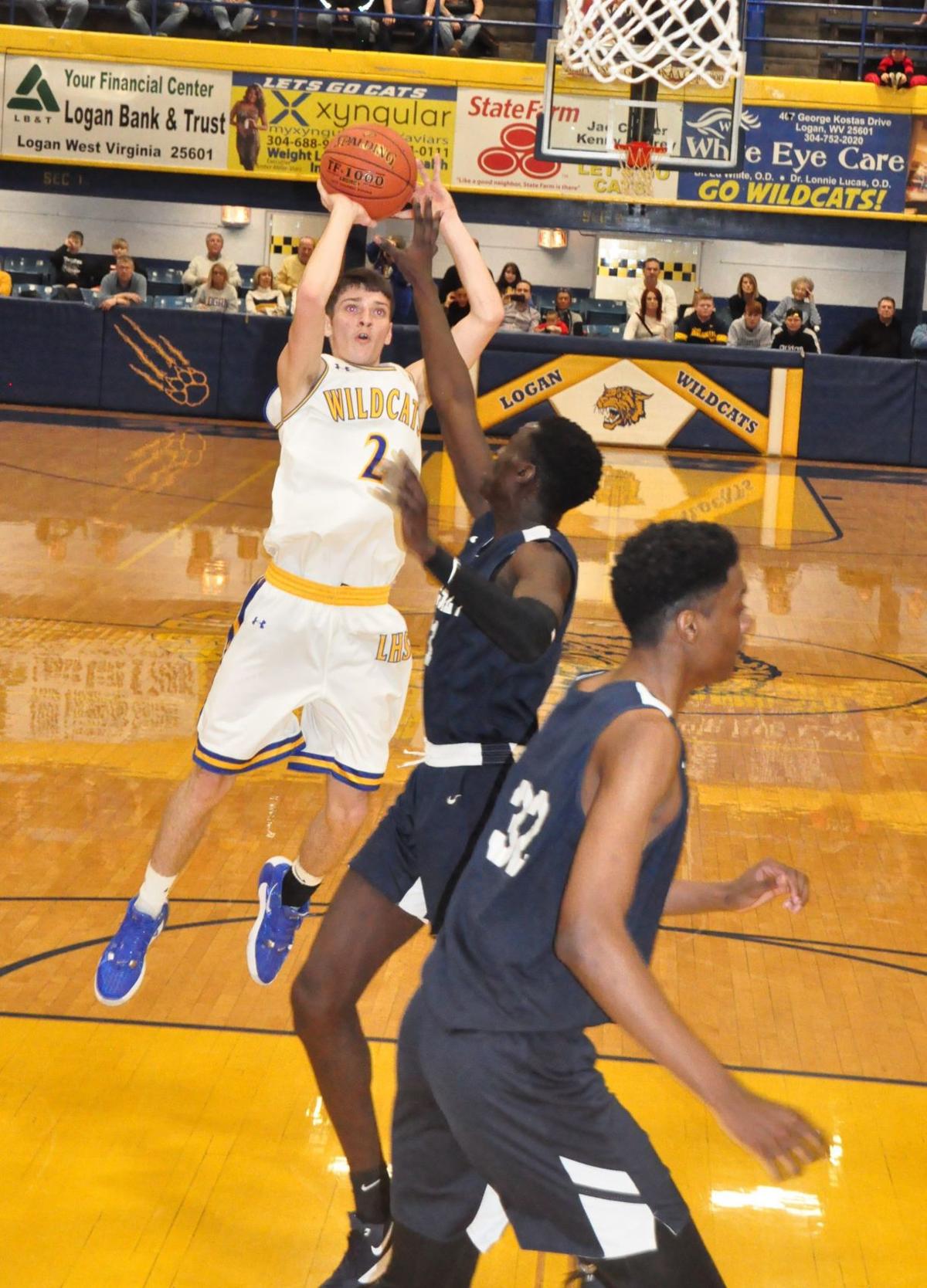 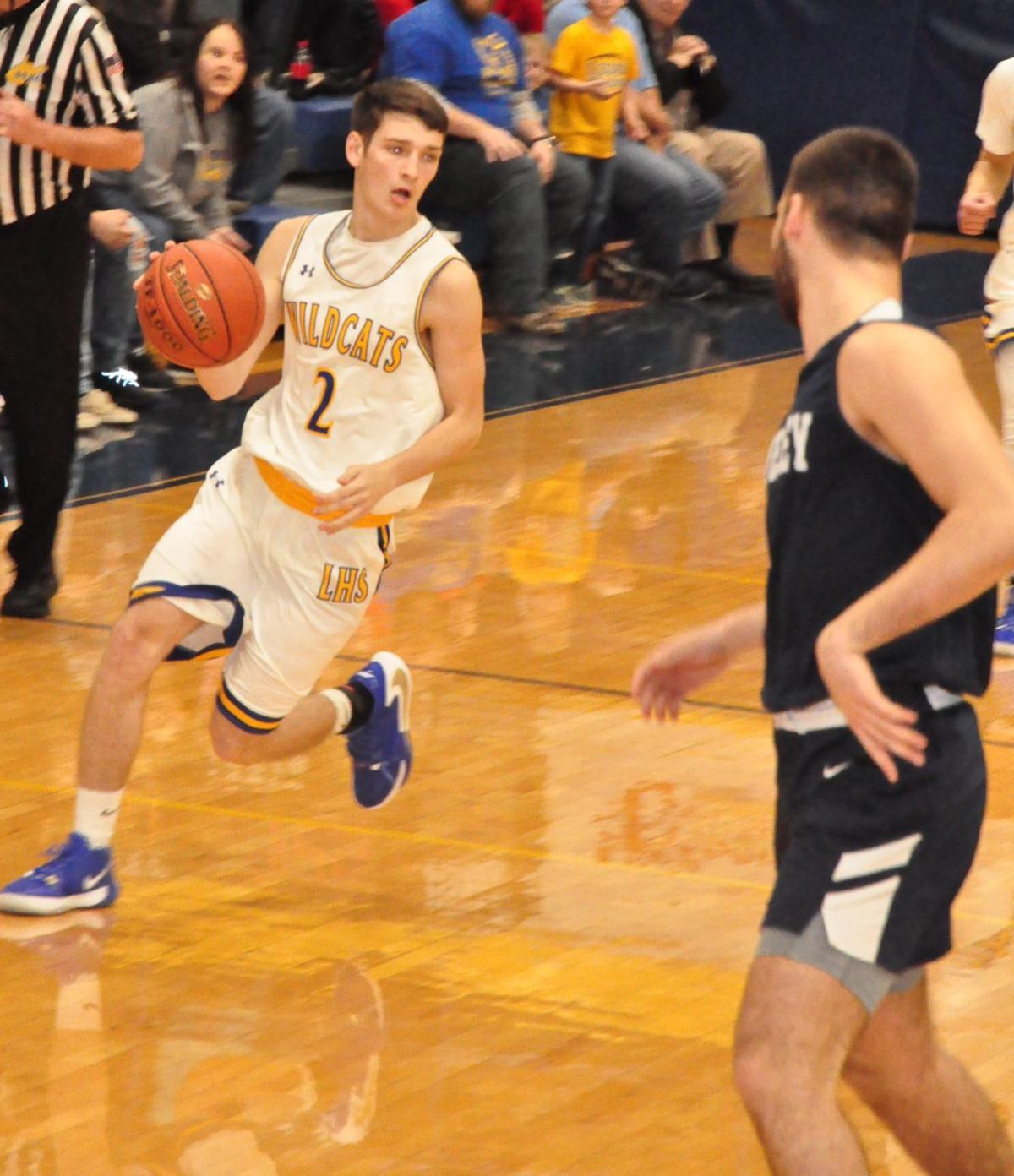 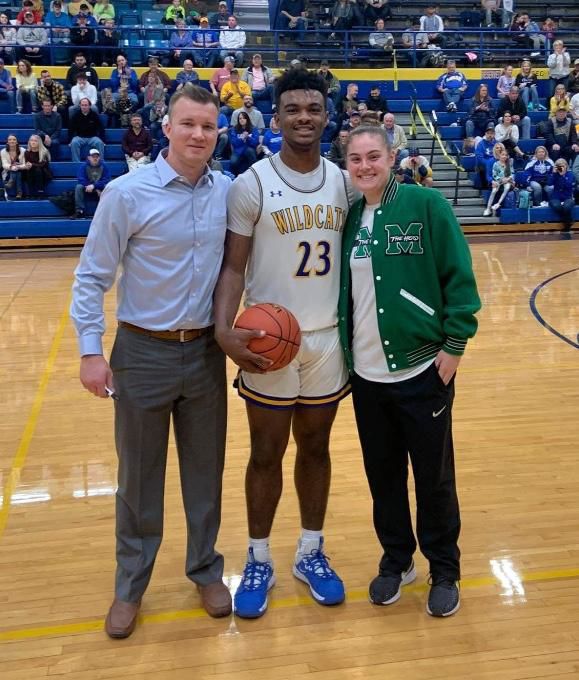 After falling 64-61 to Kentucky prep school Wesley Christian on Friday, the Class AA No. 4-ranked Wildcats bounced back on Saturday with a 66-44 win over Class A Parkersburg Catholic at Logan High School’s Willie Akers Arena.

Logan improved to 10-6 on the season with Saturday’s win.

Gore, a former Marshall University standout and current head coach of the St. Albans High School girls’ basketball team, was in attendance at Saturday night’s game, hugging Early for breaking her school record and posing for a photo.

Early made three 3-pointers in the game and was 12 of 13 from the free throw line. Garrett Williamson also reached double figures with 14 points.

Cameron Hensley had seven, Mitchell Hainer six and Jarron Glick and Carson Kirk tossed in two each. Xavier Collie had 14 and Patrick Copen 13 to lead the Crusaders.

In Friday’s game, Early pumped in 33 points as the Wildcats lost to the Kentucky prep school. He netted a trio of treys and was 8 of 9 from the foul line.

Hainer added seven points and Williamson six. Noah Cook, Glick and Hensley had four each. Aiden Slack had two and Kirk one.

Tug Valley improved to 6-9 on the season, while Parkersburg Catholic dropped to 8-4.

Easton Davis pumped in 13 points for the Panthers in the low-scoring game. Caleb May and Ethan Colegrove also broke into double digits in scoring as each tallied 12 points. May also sank a pair of 3-pointers on the night.

Patrick Copen led the Crusaders with 15 points. Jeb Boice had 12.

Parkersburg Catholic led 11-8 after the first quarter and 24-20 at halftime before Tug Valley was able to hold the Crusaders scoreless in the third while scoring 10 points to grab a 30-24 lead heading into the final eight minutes of play. Both teams netted 11 points in the fourth period.

Parkersburg Catholic was able to cut the Panthers’ lead to one point with 2:03 left as Xavier Collie scored on a putback.

Tug Valley’s May with answered with a drive down the lane with 1:40 left, pushing the lead to 35-32.

Colegrove then was fouled and also split from the free throw line with 53.9 ticks to go as the Panthers led 37-32.

Colegrove then split two free throws again with 43.2 seconds left as Tug Valley inched ahead at 38-32.

Parkersburg Catholic hit a 3 with 13 seconds to go, cutting Tug’s lead to only 38-35 and getting to within striking distance.

But then Tug Valley was able to ice the game with 9.9 ticks remaining as May was fouled, connecting on his first charity toss, putting the Panthers on top 39-35. He missed the second free throw but Colegrove was able to share the rebound and get the putback for the three-point play as Tug Valley closed it out with a six-point win.