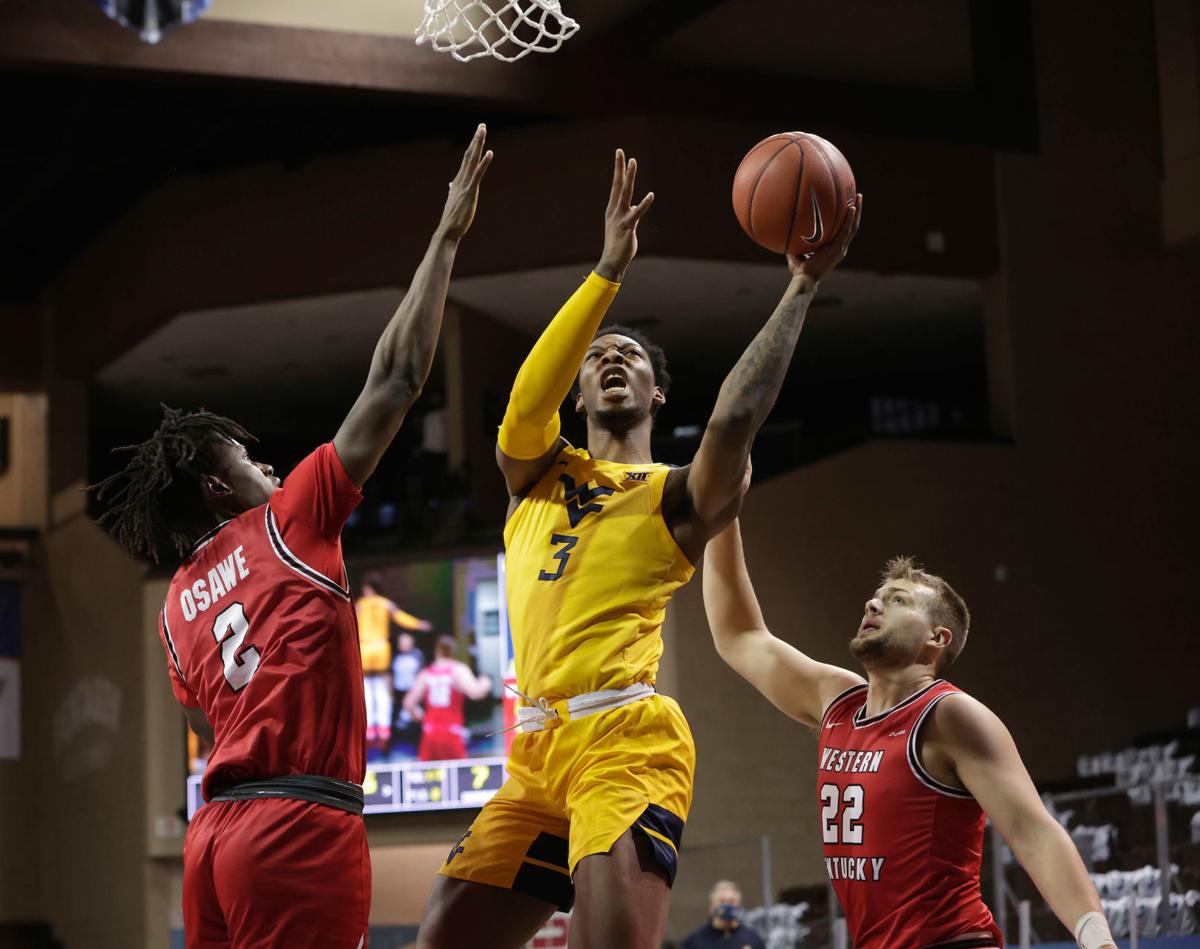 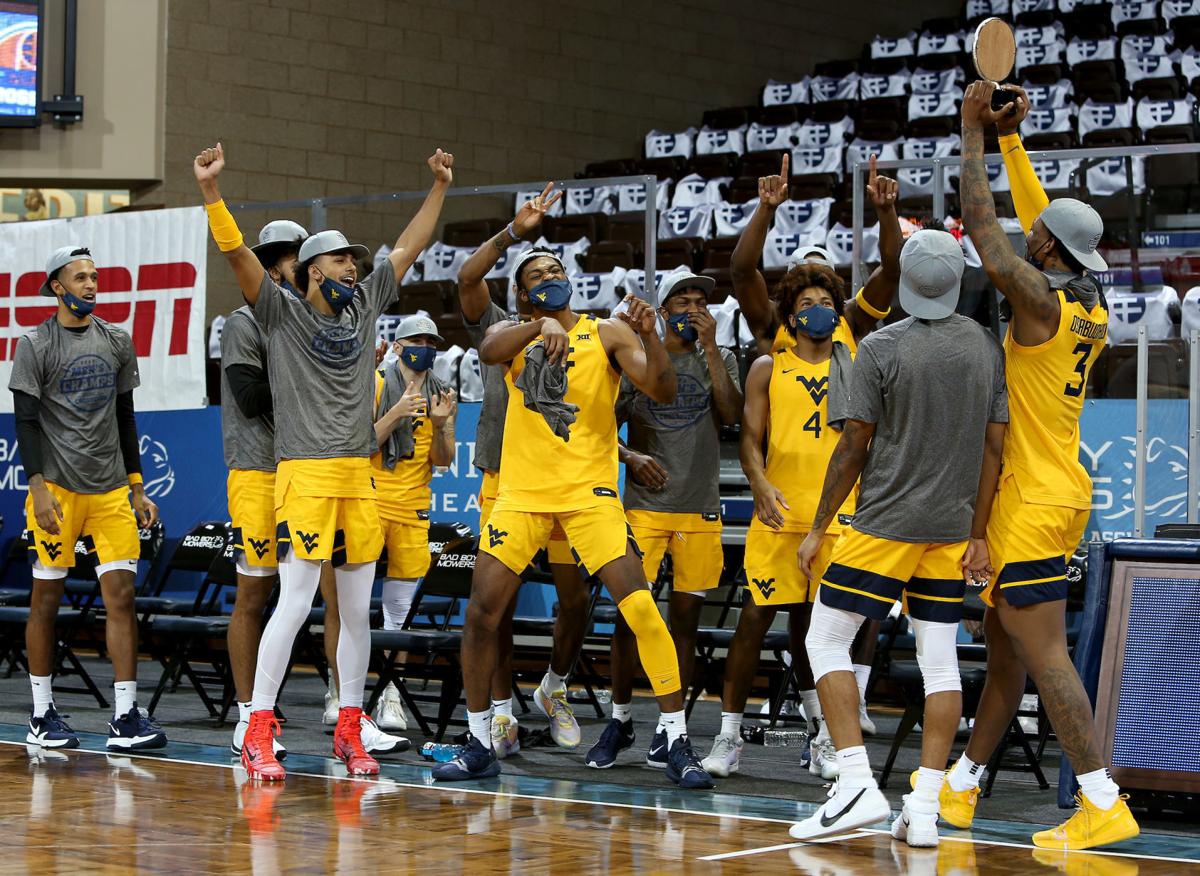 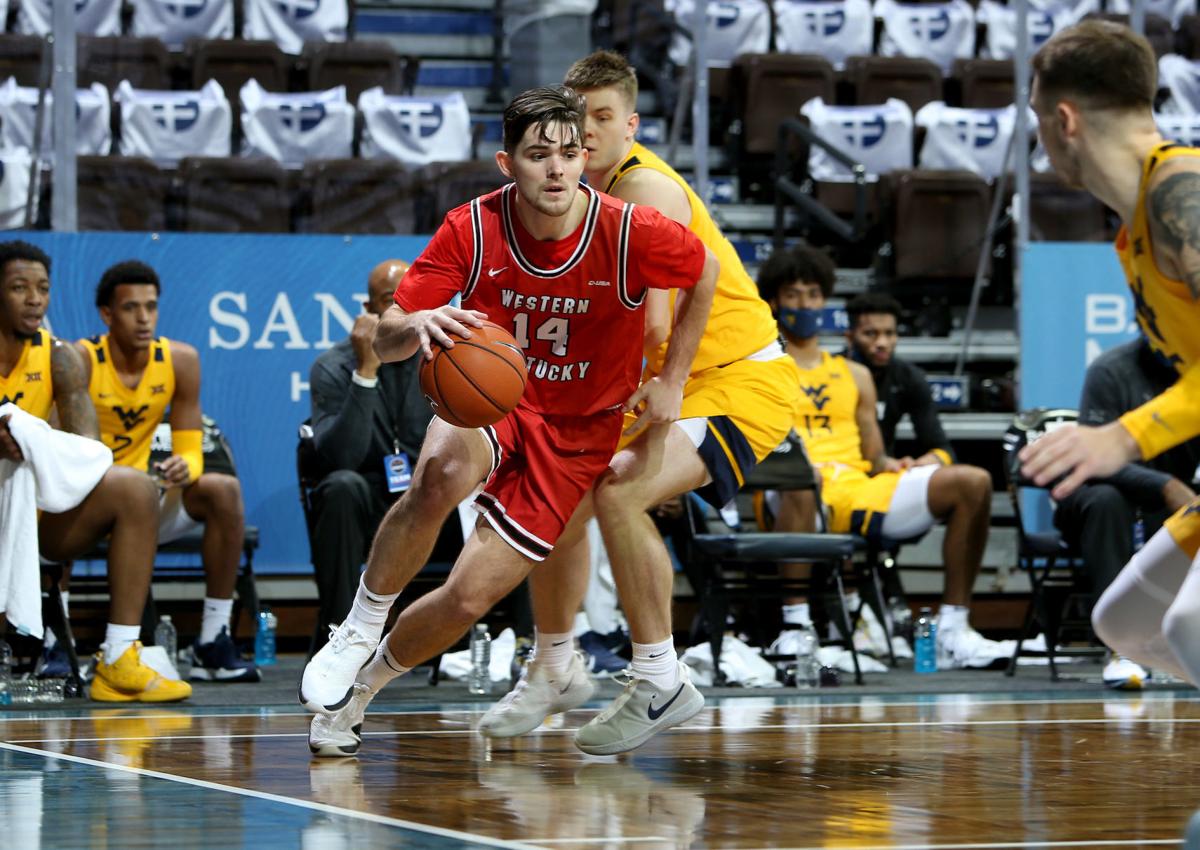 Western Kentucky’s Luke Frampton (14), a former Poca High School standout, came off the bench to score six points (on two 3-pointers) in 24 minutes of playing time for the Hilltoppers in the championship game of the Bad Boy Mowers Crossover Classic.

Western Kentucky’s Luke Frampton (14), a former Poca High School standout, came off the bench to score six points (on two 3-pointers) in 24 minutes of playing time for the Hilltoppers in the championship game of the Bad Boy Mowers Crossover Classic.

West Virginia overcame a 10-point second-half deficit to drive away with a 70-64 victory over Western Kentucky in the championship game of the Bad Boy Mowers Crossover Classic Friday afternoon in Sioux Falls, South Dakota.

The Mountaineers (3-0) opened their 2020-21 season with a three-game sweep of the tournament.

WKU took the runner-up trophy and left the Sanford Pentagon with a 2-1 record, having defeated Northern Iowa (93-87) and Memphis (75-69) in the tournament’s first two rounds.

“Congratulations to West Virginia. That’s why they are one of the better teams in the country,” said Western Kentucky coach Rick Stansbury, whose club faces Louisville on Tuesday. “They present so many problems through 40 minutes of the game, and through 40 minutes they were better than us today.”

The two combatants volleyed back and forth through much of the first half, as they exchanged the lead 12 times and were tied five times.

Eventually the Hilltoppers moved in front 29-28 at the 3:09 mark on a Taveion Hollingsworth jumper and maintained that lead for the remainder of the first half, taking a 36-33 advantage into the locker room at the break.

Foul trouble hampered West Virginia’s big men in the opening stanza. Derek Culver played 12 minutes while recording just four points and failing to pull down a rebound because he was saddled with two personals. Oscar Tshiebwe picked up two quick fouls himself and thus was limited to just five first-half minutes, where he had a mere three points and no rebounds.

Without a board from their two post players, the Mountaineers trailed WKU 15-14 in the rebounding department at halftime.

West Virginia’s coach didn’t like much about what he saw in the first half and demanded better effort in the second half.

“It was either that or walk home,” smirked Bob Huggins in the postgame.

That halftime speech didn’t pay immediate dividends, as things went from bad to worse for West Virginia in the opening few minutes of the second half.

After making its first shot of the period, WVU missed five straight field goal attempts and also had two turnovers, leading to a 9-0 Hilltopper run and a 45-35 Western lead.

WKU’s double-digit bulge quickly slipped away, though, as a flurry of Hilltopper turnovers and missed shots led to a West Virginia charge that left the Mountaineers with a 55-52 advantage at the 8:10 mark after a Taz Sherman 3-pointer.

“I thought the tempo got away from us after we got the lead in the second half. We had three turnovers in four trips that changed the tempo of that game,” noted Stansbury.

WVU eventually stretched its run to 18-2 and its lead to 59-52 before Western Kentucky’s Luke Frampton, a former Poca High School standout, knocked down a 3-pointer to stem the Mountaineer sprint. The former Dot finished with six points, hitting two of five 3-point attempts in 24 minutes of playing time off the bench.

Frampton’s second half trey only momentarily slowed WVU, though, as Culver followed with a contested jump hook in the lane and then Sean McNeil buried a 3-pointer from the wing. Suddenly a Mountaineer team that trailed by 10 earlier in the half enjoyed a 64-55 lead at the 3:57 mark.

Western Kentucky had fight left, though, and narrowed WVU’s lead to 66-62, but the Mountaineers made all four of their free throws in the final 40 seconds to seal the victory.

Culver navigated his way through the second half with only one additional foul. He stayed on the floor for 17 of the period’s 20 minutes and was able to lead WVU’s offensive charge, scoring 11 points in the half and 15 for the game. He did manage only one rebound, though. Tshiebwe finished with seven rebounds and five points.

McBride and Sherman both reached double figures in the scoring department for West Virginia with 14 and 12, respectively.

The Mountaineers outrebounded WKU by seven in the second half and had a 36-30 advantage on the boards for the game. Each team had 10 turnovers.

“For sure, there is not a team in the country that is as physical and as big and strong as West Virginia,” stated Stansbury, who was also the coach at Mississippi State when WVU beat the Bulldogs 63-62 in the 2007 NIT semifinal on a Darris Nichols buzzerbeater.

On Friday, the Hilltoppers’ own talented big man, Charles Bassey, was also limited in the first half by foul trouble himself — two points and one rebound in three minutes — also came on strong in the second half. He finished with a team-high 15 points and eight rebounds.

For the Mountaineers, the three games in South Dakota not only provided a Crossover Classic championship but also some valuable experience to start the season that faces so many questions because of the raging coronavirus.

“Everything was good,” said Huggins of his team’s stay in Sioux Falls. “We came in and practiced, and obviously played in three games. That was valuable.

“I thought the bubble was terrific, other than the guy manning the door [at the Sanford Pentagon], who kind of got lost and left us out in the cold for a little while,” the veteran coach chuckled.

West Virginia returns home for a short rest before heading back on the road for a trip to Indianapolis, where it will meet No. 1 Gonzaga in the Jimmy V Classic on Wednesday. Tipoff is slated for 7 p.m., and the game will be televised by ESPN.