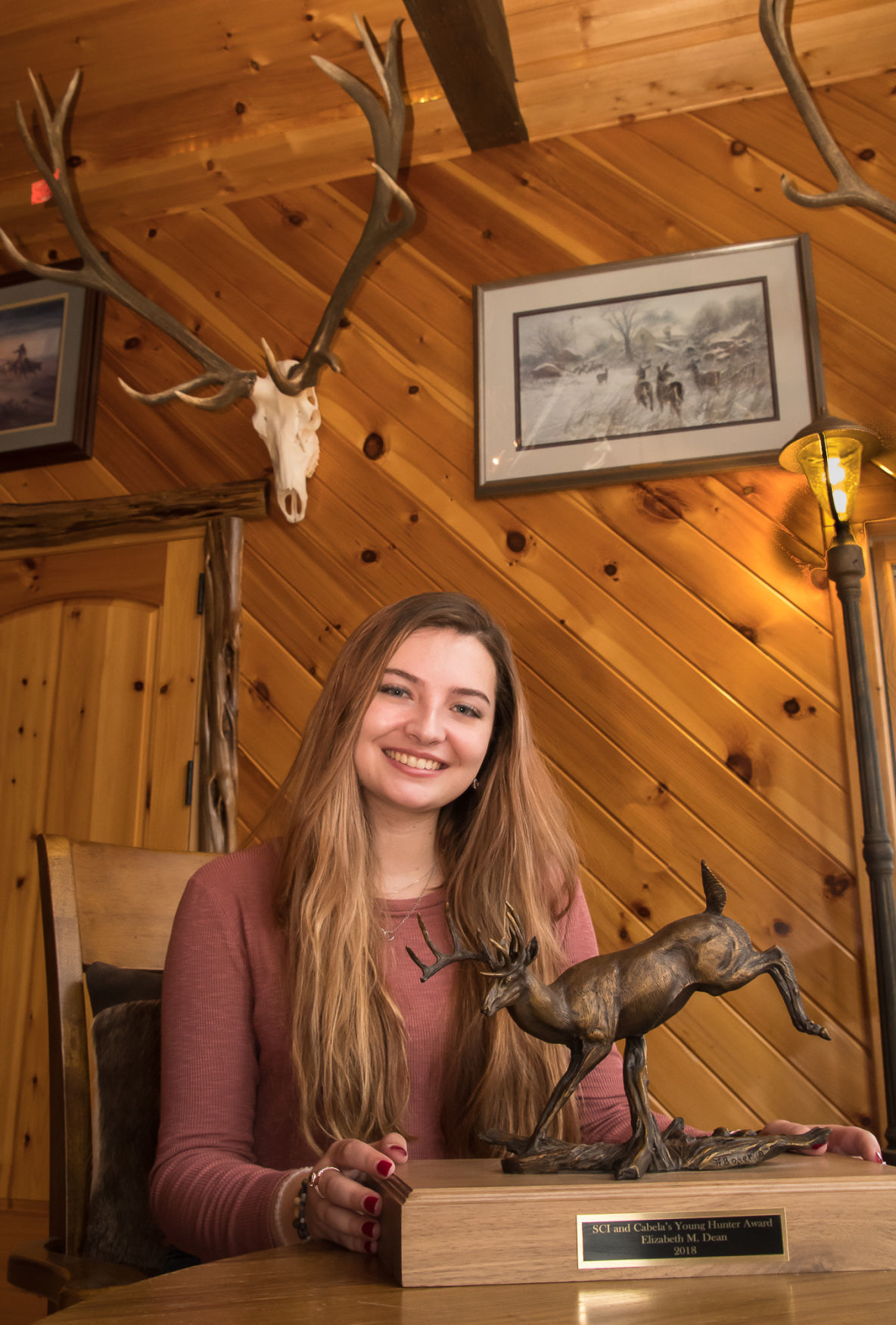 Marshall University senior Elizabeth Dean received a bronze sculpture of a white-tailed buck when she was named Young Huntress of the World by Safari Club International in 2019. 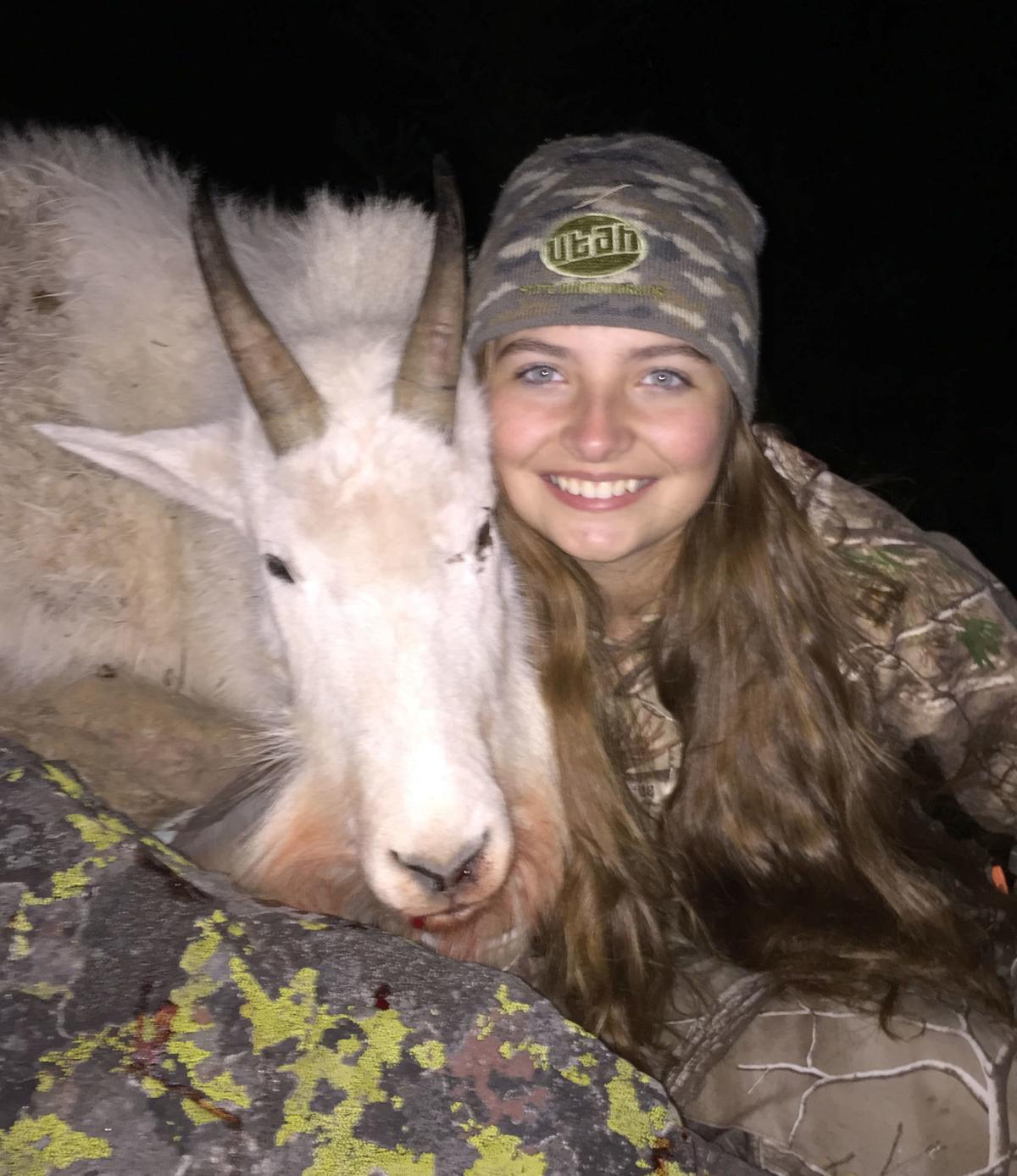 Dean’s hunt for a mountain goat was one of the tougher ones she’d undertaken. She had to fight her fear of heights, as well as the thin air at 12,000 feet to get close enough for a shot.

Marshall University senior Elizabeth Dean received a bronze sculpture of a white-tailed buck when she was named Young Huntress of the World by Safari Club International in 2019.

Dean’s hunt for a mountain goat was one of the tougher ones she’d undertaken. She had to fight her fear of heights, as well as the thin air at 12,000 feet to get close enough for a shot.

Elizabeth Dean’s unbridled passion for hunting is getting noticed.

In the past year, the 19-year-old has received a major award from an international hunting association, a pro-staff offer from the world’s largest hunting and fishing outfitter, and offers to write hunting-related articles for publication.

She’s done a bit of hunting, too. She’s hunted for turkeys and deer on her family’s farm, as well as mule deer and elk in Utah. Amid all that, she and her family managed to squeeze in a trout- and salmon-fishing adventure to Alaska.

Having a busy outdoors calendar is nothing new for Dean, a senior at Marshall University. As she puts it, she’s been “obsessed” with hunting since she was 7 years old.

“I’d been going on hunting trips with my parents even before that,” she said. “Then, when I was 7, Dad took me out and I killed my first white-tailed doe. I fell head over heels in love with hunting.”

Given such a resume, it seemed only natural that Dean, a life member of Safari Club International, would be considered for that organization’s Young Huntress of the World award.

Candidates must receive a recommendation from their school citing their academic achievements. Dean received hers from Ashland Community and Technical College, from which she graduated at age 16, at the same time she graduated from high school.

“I also had to write a 500-word essay describing my efforts to be a role model in the outdoor world,” she said. “I had to describe and include pictures of the hunting I had done, and I had to describe my involvement with conservation-related organizations.”

Dean mailed in all the materials, but didn’t think much about winning until she got a surprise phone call.

“I was at my grandparents’ after school one day, and Mom got a phone call,” she recalled. “She said she’d gotten a call from SCI, and that I needed to return the call.”

She made the call.

“The woman said, ‘Congratulations. You’ve been selected as one of the SCI’s Young Hunters of the World,’ ” Dean said. “I was ecstatic. I freaked out. I absolutely went insane.”

After telling her mother and grandmother, Dean called her father, who was hunting in New Mexico at the time.

“He started freaking out as much as I was,” she said. “Everyone in the room could hear him, and he wasn’t on speakerphone.”

The organization flew Dean to Reno, Nevada, for the award ceremony.

“I was terrified during the days leading up to it,” she said. “I had to make a short speech, and speaking in public makes me nervous.”

When a stage hand misplaced the written copy of her speech, Dean had to deliver it, from memory, to an audience of 5,000 convention-goers.

“I don’t usually rehearse much, but I’d read through that speech at least 10 times in the hours leading up to the ceremony,” she said. “Because of that, I was able to get through it all right.”

“She said, ‘I just want you to know that you are one of my role models,’ ” Dean recalled. “I’ve seen you on [cable TV’s ‘Fly Rod Chronicles’], and I love everything you do. You are one of my biggest inspirations.’

“I almost broke down when she told me that. She made me realize that I really can try to do something to help young people in hunting and fishing.”

Not long after she received the award, officials from Bass Pro Shops/Cabela’s approached Dean with an offer to join the outdoor retail giant’s professional staff.

“That was super-cool for me, because it came from the largest hunting/fishing/outdoors store in the world,” she said. “I’ll be going on ‘tours’ to different stores, giving speeches and making presentations.”

She’s also been asked by two separate hunting-related publications to contribute an article about her 2016 mountain-lion hunt.

She said she has to schedule all that around her senior-year studies in business administration, her work with her family’s business interests, her work as a hunting guide, and her own hunting and fishing exploits.

Hey, it’s all part of the process for a young huntress as she comes of age.