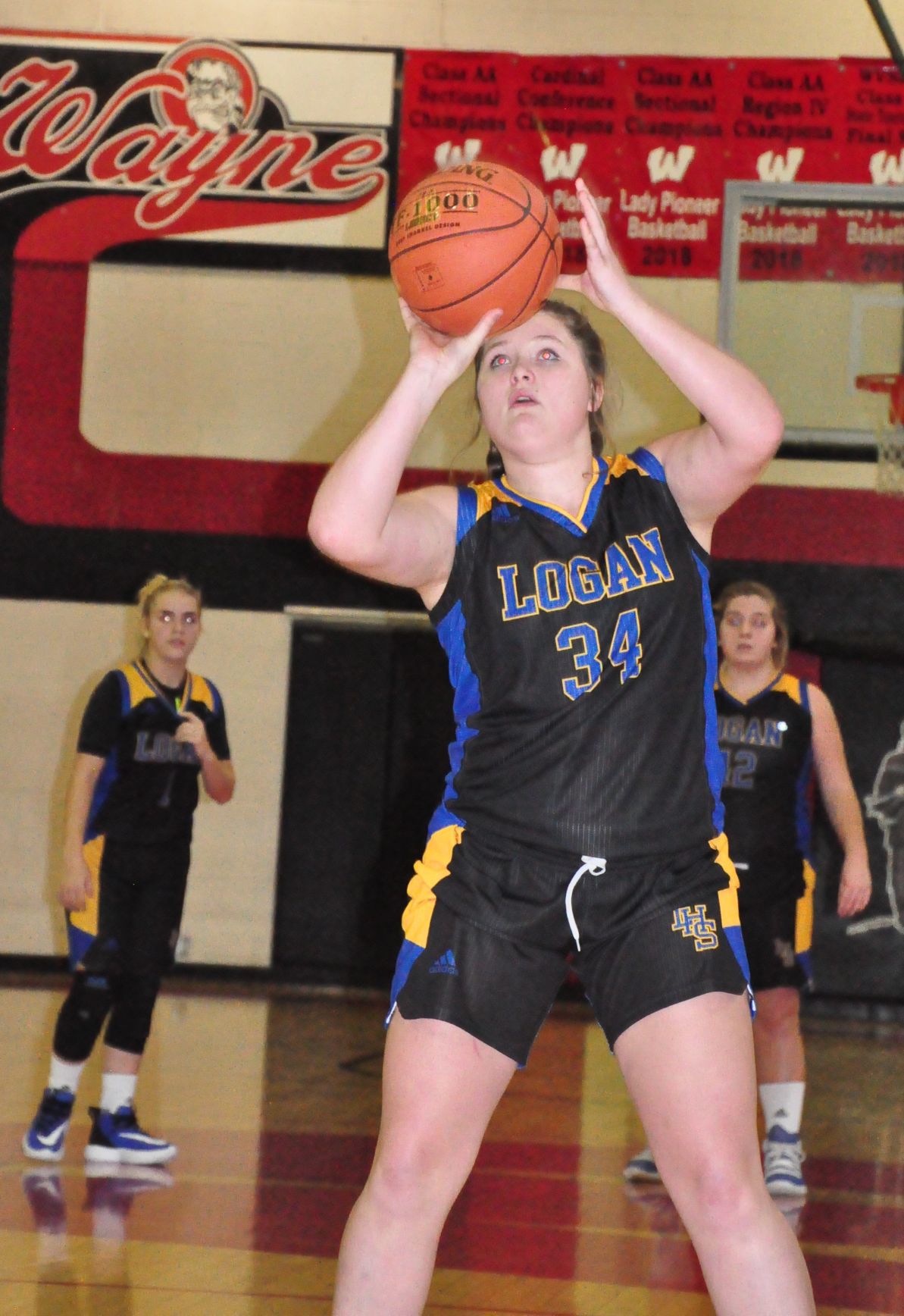 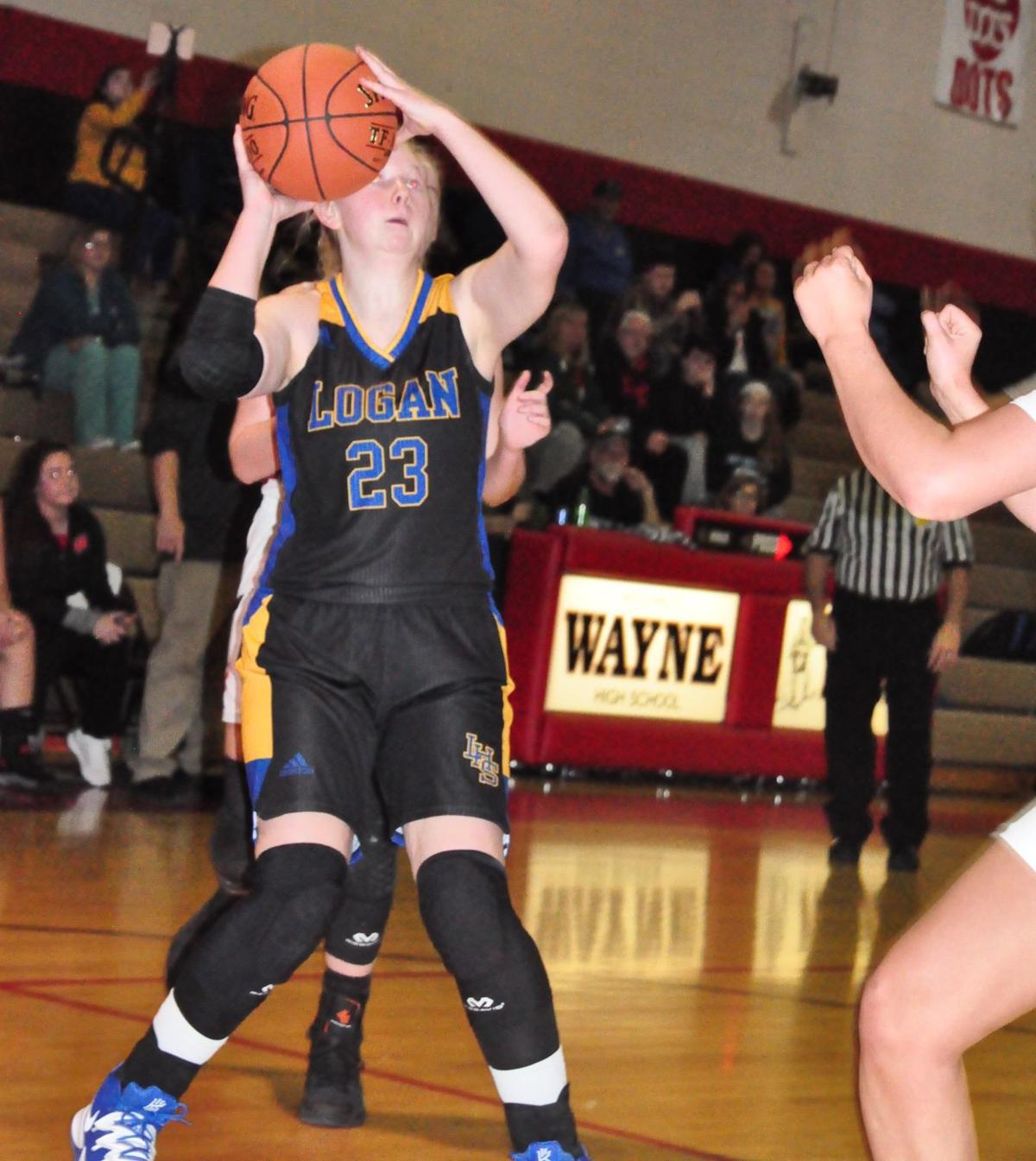 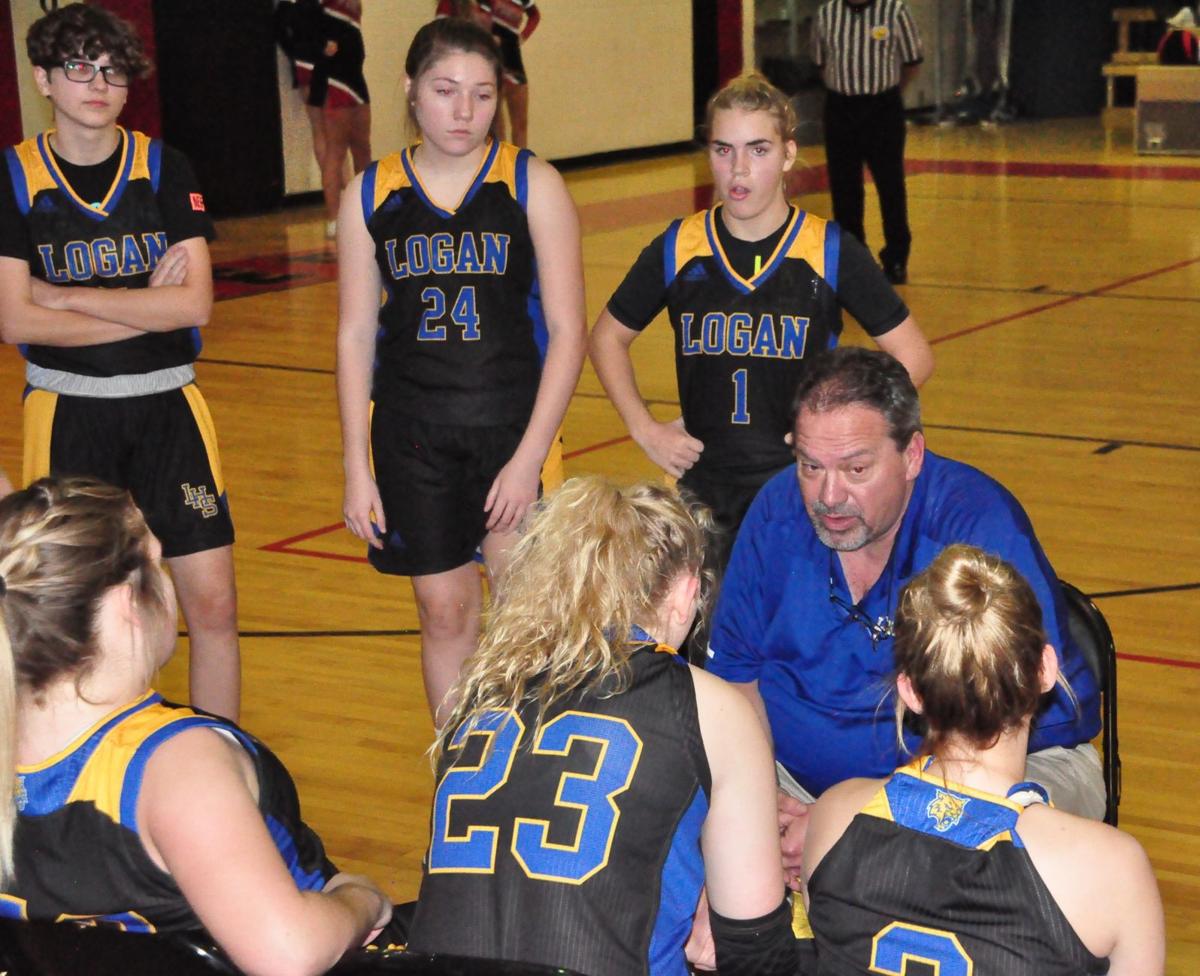 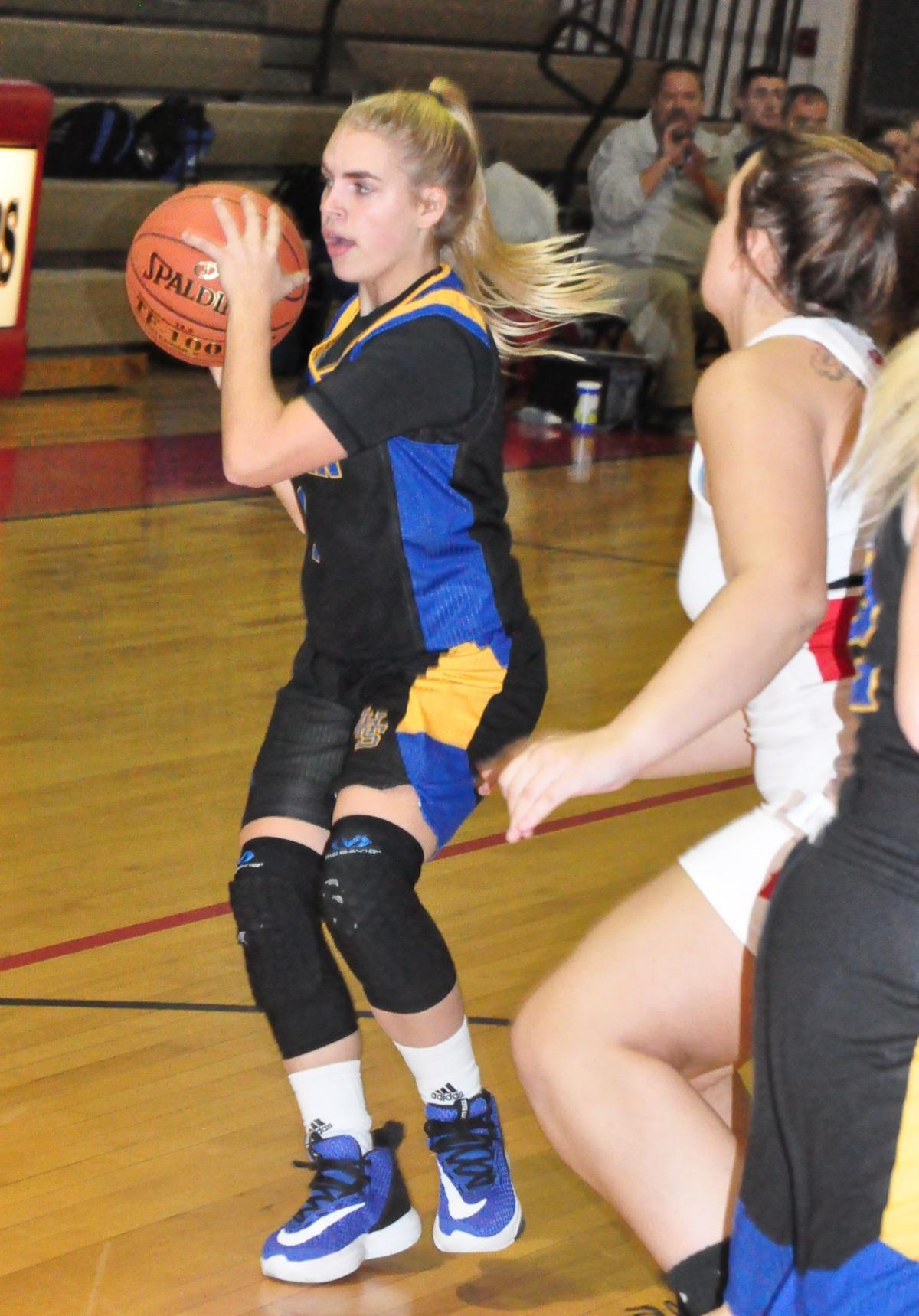 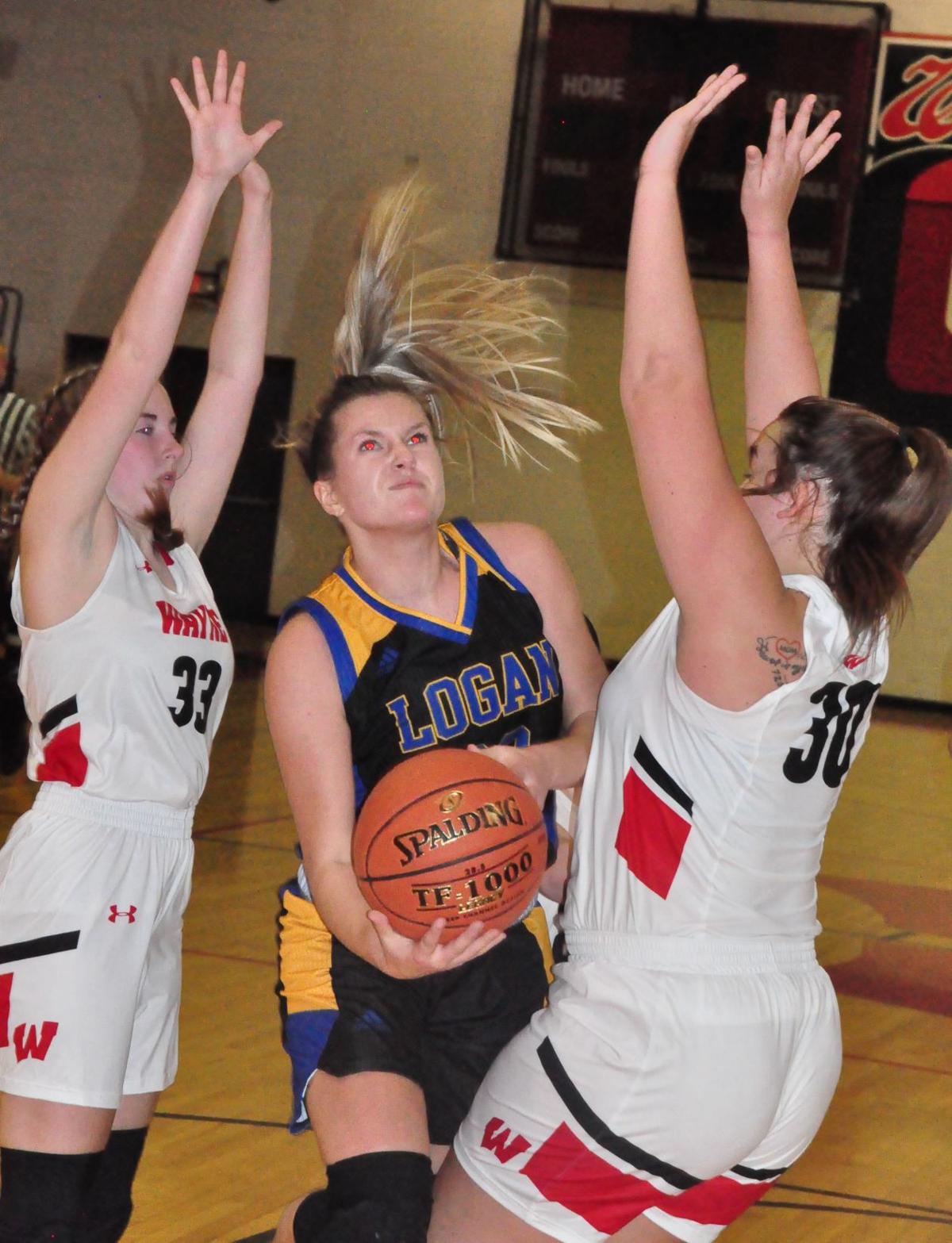 Paul Adkins/The Logan Banner Logan High School’s Peyton Ilderton scoops the ball up for a shot in the lane in the Lady Cats’ 56-36 loss at Wayne on Thursday, December 12, 2019.

Paul Adkins/The Logan Banner Logan High School’s Peyton Ilderton scoops the ball up for a shot in the lane in the Lady Cats’ 56-36 loss at Wayne on Thursday, December 12, 2019.

WAYNE — To call the Logan High School girls basketball team young would be an understatement.

With only three players with any significant varsity experience and a fourth with only a few games under her belt the Lady Cats are a team that you would call “untested.”

Compounding the challenge is that Logan only has 10 players on the entire roster.

Despite all the obstacles Logan put up a good fight at Wayne on Thursday night but a late surge by the host Pioneers was enough as the Lady Cats fell 56-36.

Logan, 1-2 overall and 0-2 in the Cardinal Conference, led 7-2 early and trailed just 23-20 at halftime but Wayne was able to gradually pull away, talking advantage of several Lady Cats turnovers and cashing them into easy buckets.

Wayne, a state tournament team the last few years, is doing some rebuilding of its own having lost All-State player Lakyn Adkins due to graduation. The Pioneers improved to 3-0. 1-0 with the win. The Pioneers already had non-conference wins over Tug Valley (64-43) and Point Pleasant (59-27).

“They are an extremely athletic team,” Logan said of Wayne. “Their wings are so long and so fast. We were up 7-2 but I believe we turned it over the next six times we touched it. But then we came back and we were only down three at the half.”

Wayne then led by as many as 20 points in the fourth quarter.

“We only got one shot out of our first five possessions to start off the second half.,” Gertz said. “We got it back to 13 at one point but ran out of gas. We’ve got a lot of young kids that have zero varsity experience. Zero. We only have three kids that have varsity experience with Jill, Peyton and Raegan. Emma played varsity last year but mostly played mop-up duties. We need more varsity time but they are learning and getting better each and every day. Today is only Dec. 12. I’m looking forward to building for February. Records don’t matter. In basketball and baseball records do not matter. You want to win though absolutely. The good thing about this team next year is that we are going to have everybody back. But I’m not giving up on this year’s team by any means.”

Up by 13 in the fourth quarter, Wayne was able to put the win away.

But then Eves scored on a putback in the lane and Hooks later drove down the paint and scooped one it as the Pioneers led 52-34 with 2:47 left.

That was the clincher as both teams soon emptied their benches.

Logan had the upper hand early. After a pair of Quick free throws, a Tothe 3 and a Quick bucket the Lady Cats led 7-2.

Wayne rallied, tying the game at 7 and going up by two with a Tabor basket as the Pioneers led 9-7 after one.

The Lady Cats cut it back to 20-15 with an Elkins hoop and later to 23-18 on Ilderton’s old-fashioned three-point play.

Wayne led 23-20 at the half and expanded its lead in the third quarter.

The lead later swelled to 38-23 after Stroud connected on a pair of charity tosses.

Gertz said Wayne is a very difficult place to play as Logan hasn’t had that much success there in recent years. Last year’s Cardinal Conference champions, Chapmanville Regional, also lost a there.

“It is a hard place to play but if you want to advance and be good this is the kind of place that you’ve got to win at,” Gertz said.

Logan is not scheduled to play again until Thursday, Dec. 19, at home against Class AA sectional foe Lincoln County. Tip off is 7 p.m.

“It will be a huge home girls’ weekend,” Gertz said. “It’s the girls’ version of the King Coal. We’re looking to showcase girls’ basketball in southern West Virginia. Hopefully next year we can expand this and bring in some northern teams. Next year we are going to be Triple-A.”

A total of nine games are scheduled over two days.

The 9 p.m. nightcap has host Logan taking on Scott.

The showcase then concludes on Saturday, Jan. 4 with six games.

At noon, Lincoln County faces off with Independence. Then in Game 2 at 1:30 p.m., Chapmanville Regional battles with Martin County, Kentucky. Game 3 at 3 p.m. has Tug Valley squaring off with Summers County.

Paul Adkins is the sports editor of the Logan Banner. Follow him @PAdkinsBanner on Twitter or email him at padkins@hdmediallc.com.